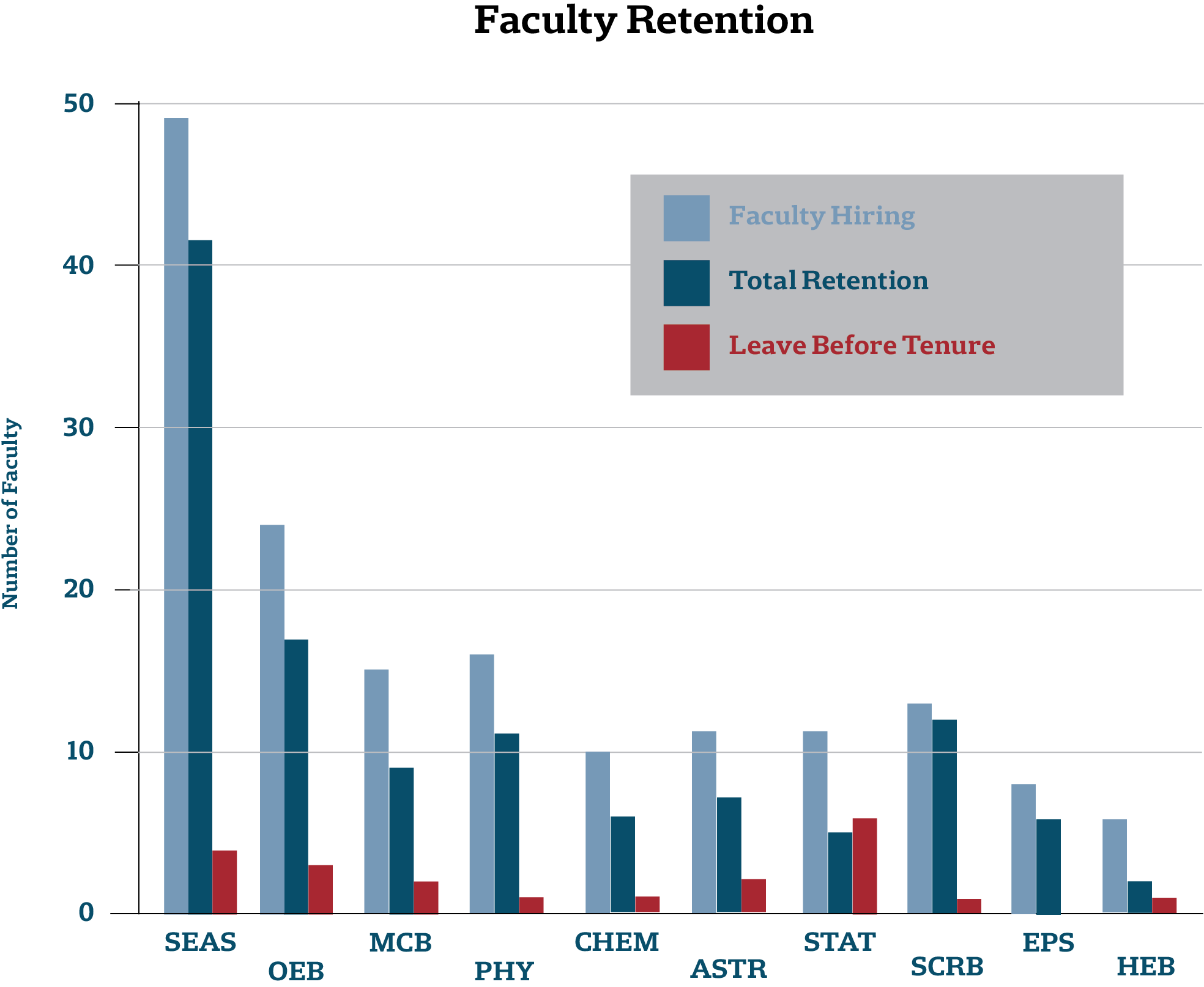 The retention rate for female faculty in science, engineering, and mathematics departments at Harvard is almost 20 percent lower than it is for male faculty, according to an internal report compiled by a group of professors.

Frustrated by what they saw as a gap between official Faculty of Arts and Sciences data and their personal experiences, two professors—Computer Science professor Radhika Nagpal and Organismic and Evolutionary Biology chair Elena M. Kramer—spent months gathering data on over 150 Harvard professors in the School of Engineering and Applied Sciences and 10 STEM departments. The two women, working with several other professors who did not want to be publicly identified, found that Harvard’s retention rate for women in STEM from 2000 to 2015 was 44 percent, compared to 62 percent for men.

In November 2016, Nagpal and Kramer sent their report to several top administrators, including Dean for Faculty Affairs and Planning Nina Zipser, Dean of the Faculty of Arts and Sciences Michael D. Smith, and University President Drew G. Faust. The two women also sent the report to all Faculty members in SEAS and the departments.

Nagpal and Kramer said some administrators responded privately to their report, though they said they would have preferred a more public response.

“It’s been a crazy time, with all the problems being handed down to us by the Trump administration, so I’m not surprised there has not been much,” Nagpal wrote in an emailed statement. “But now we need to start doing more—and we can’t just do the same things we did the past ten years and expect things to turn out any differently.”

Through spokespeople, Smith and Faust declined to comment for this story. Harvard spokesperson Rachael Dane wrote in an emailed statement on Zipser's behalf that “the FAS has responded to and addressed this important issue in many Dean's annual reports.”

Dane pointed to the 2015 and 2016 dean’s reports in particular, which both show that a higher percentage of women than men did not come up for tenure review from 2003 to 2013. While Harvard's official report tracks data across all of FAS, Nagpal and Kramer focused on SEAS and 10 additional departments: Organismic and Evolutionary Biology (now titled Integrative Biology), Molecular and Cellular Biology, Physics, Chemistry, Astronomy, Statistics, Stem Cell and Regenerative Biology, Earth and Planetary Sciences, Human Evolutionary Biology, and Mathematics. 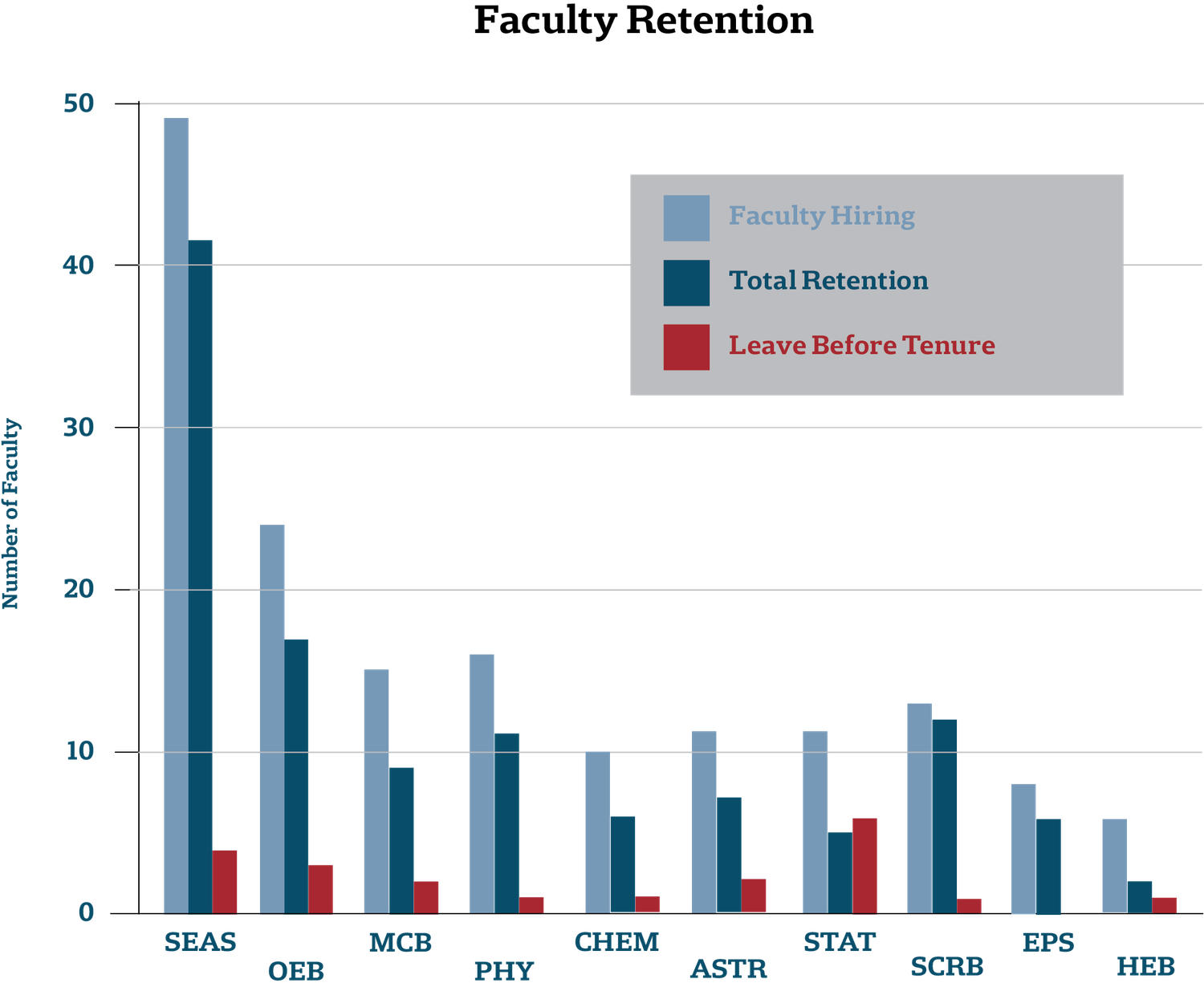 Nagpal and Kramer called this statistic “the most dramatic disparity revealed by the study.”

Overall, the report showed that 29 percent of STEM faculty hired by Harvard between 2000 and 2015 were female.

Previous dean’s reports have focused on the issue of gender disparity in faculty tenure appointments at Harvard. The 2016 report revealed that 65 percent of women came up for tenure review from 2000 to 2013, while 78 percent of men did so.

“Our historical analysis in last year’s report showed that a smaller percentage of women remain on the tenure track through their tenure review,” administrators wrote in the 2016 report. “This fact is correlated with the outcome that women are not attaining tenure at the same rate as men.”

The 2016 report notes that the Faculty began a “major push” in academic year 2015-2016 to address these issues of attrition, including working to improve mentorship and professional development programs for tenure-track faculty at Harvard.

In the introduction to their report, Nagpal and Kramer acknowledged that past dean’s reports have highlighted Harvard’s struggles to retain female professors. But the two said they think Harvard will be better able to solve these issues if they can rely on department-specific data like the statistics given in their report.

“This kind of directly comparable data will help departments to evaluate their performance and identify problem areas,” Nagpal and Kramer wrote in their report.

Nagpal and Kramer said they decided to create the report after watching scores of female friends working in STEM departments decide to leave the University.

“It’s been heartbreaking for me,” Nagpal wrote in an emailed statement. “That’s the simplest I can put it.”

One year, Kramer said five of her female colleagues, all good friends, left in one go—prompting Kramer and others to host a goodbye party.

“We had this going away party, and it was just really depressing to see all of these really fantastic women leave the institution,” Kramer said. “The tenure-track women who were still here were all feeling very demoralized.”