Pot shops may come to Harvard Square, but Harvard students may be limited in their ability to frequent them.
By Jonah S. Berger and Isabel M. Kendall 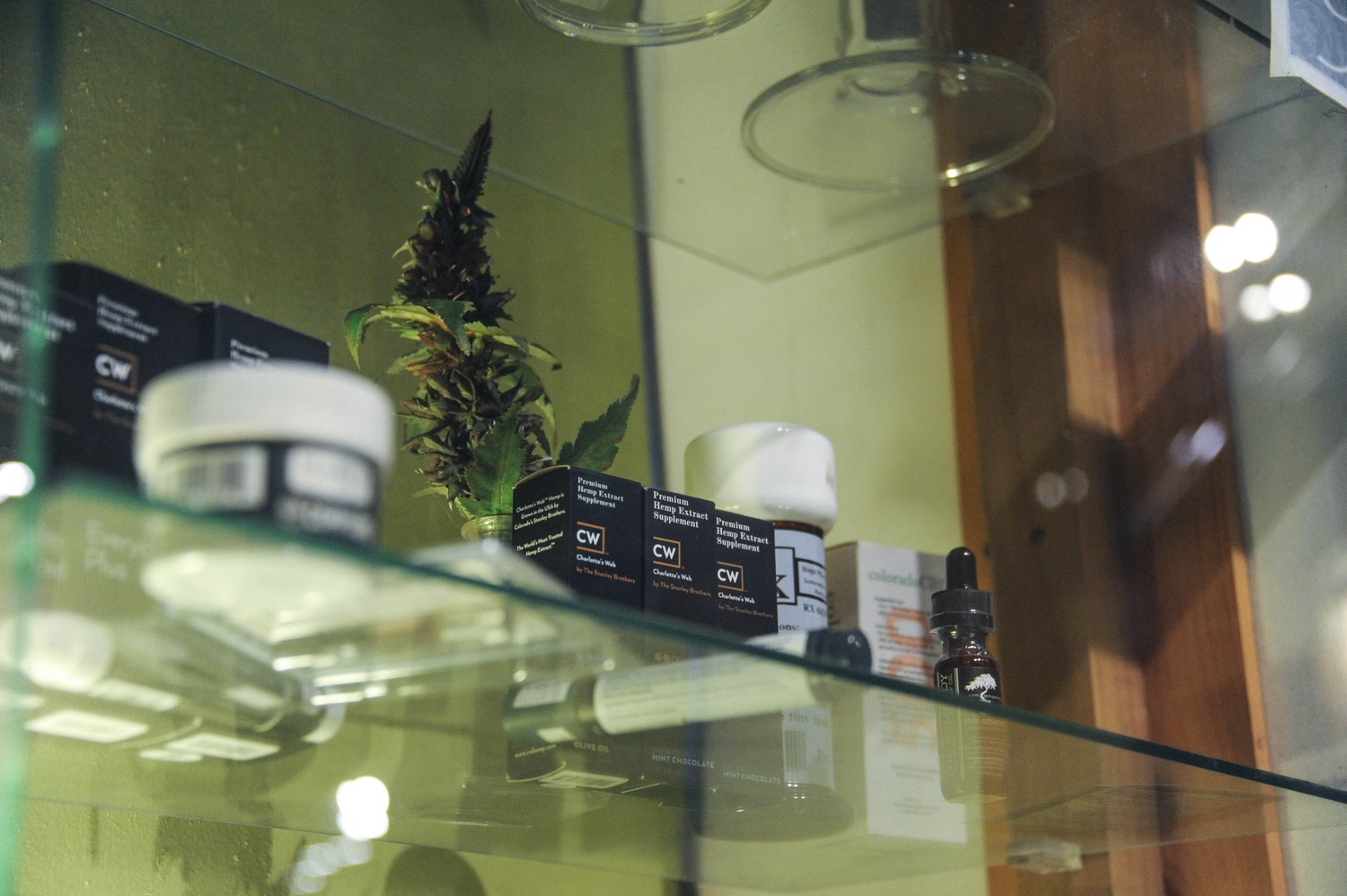 Hemp products on display at The Hempest in Cambridge. By Derek G. Xiao

More than a year after Massachusetts voters legalized marijuana, the leafy green plant is on the minds of Harvard Square politicians, business owners, and University students as the opening date for recreational pot shops in the state approaches.

Fifty-three percent of voters approved ballot Question 4 in November 2016, joining eight other states in legalizing recreational use of the drug. Massachusetts had previously decriminalized the possession of small amounts of marijuana in 2008 and legalized medical marijuana in 2012.

After intense debate over the summer, the Massachusetts Legislature passed a compromise marijuana bill in July that laid out procedures for regulating recreational marijuana—and put in place a July 2018 date for the state’s first recreational retailers to open their doors.

Though recreational marijuana shops have been given the green light to begin operating in Massachusetts, the Cambridge city government is still hashing out the details. The issue of marijuana has been on the Cambridge City Council’s agenda since its legalization last November, and the body could begin approving licenses this spring.

Even though it has been legal for less than a year, Harvard students are not exactly unfamiliar with the drug. In The Crimson's annual senior survey, 51 percent of student respondents in the Class of 2017 reported having used marijuana at least once. In a survey distributed to members of the Class of 2021 this summer, 27.7 percent having tried the drug.

But in light of broad usage on campus and acceptance statewide, University policy hasn’t changed to reflect Massachusetts law: marijuana use, possession, and distribution remains a violation of University rules. Pot shops may soon come to Harvard Square, but Harvard students may be limited in their ability to frequent them.

For years, Square residents have had no trouble securing their share of marijuana paraphernalia: The Hempest and a branch of the Boston Smoke Shop have long provided students and local denizens with bongs, lights, and marijuana-related apparel.

But nearly five years after medical marijuana was legalized for permit holders in Massachusetts, Harvard Square still has not seen its first dispensary come to town.

Barring any unforeseen roadblocks, that will soon change. Healthy Pharms Inc., a nonprofit medical dispensary based in Georgetown, Mass., plans to open a storefront at 98 Winthrop St. in coming months. The Cambridge Planning Board approved a permit for Healthy Pharms to open a storefront in Harvard Square in February, when they modified zoning ordinances to permit five or six new medical dispensaries to open in the area. 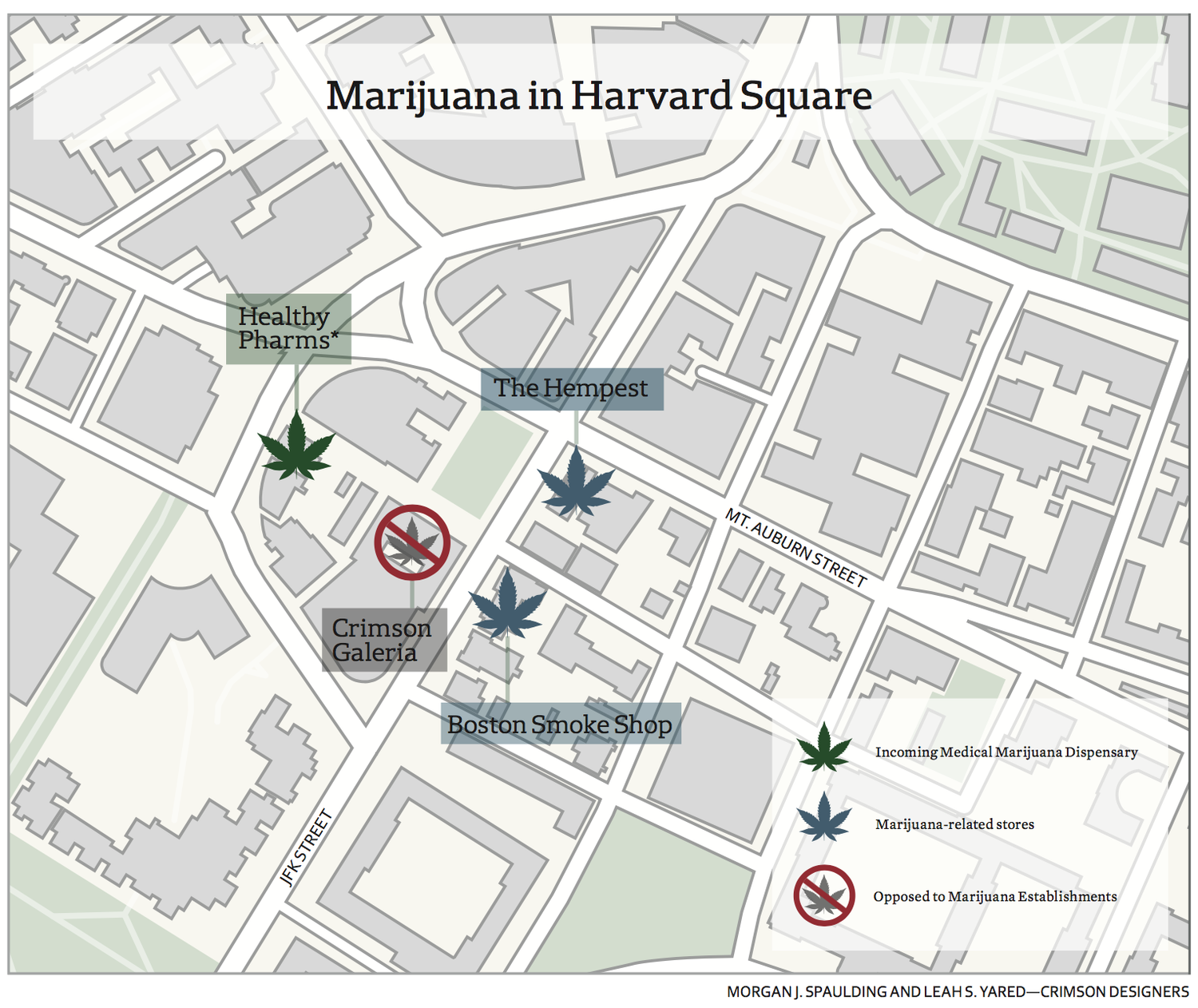 But Healthy Pharms’s plans have not gone without complications. A certificate of occupancy from the city and final approval from the Massachusetts Department of Health still have not arrived, though, preventing Healthy Pharms from opening its doors.

Several members of the Cambridge City Council did not respond to requests for comment, and city councillor Jan Devereux declined to comment.

Another barrier Healthy Pharms must overcome is a federal lawsuit brought by the owner of Crimson Galeria, Raj Dhanda, who argues that his businesses have been “substantially injured by a conspiracy to sell marijuana” and should be compensated for these losses.

Scott A. Schlager, an attorney representing Dhanda in the lawsuit, wrote in an emailed statement that “dispensary owners must take proper measures to perform appropriate abutter outreach.”

“The first step in any successful development project is neighbor support,” he added.

Even if Dhanda were to win the lawsuit, though, Healthy Pharms’s operations would most likely already be in full swing. “We don’t anticipate any major developments until January or February,” said Schlager, a timetable that could jeopardize Dhanda’s quest to block the shop from ever opening its doors.

Similar lawsuits by pot shop opponents and the Department of Justice have floundered in other parts of the country. And in an interview, Valerio G. Romano, an attorney for Healthy Pharms, pointed to a sharp condemnation of Dhanda’s lawsuit from Denise A. Jillson, the executive director of the Harvard Square Business Association, and said that medical marijuana has received “overwhelming” support from the community.

In a June email exchange obtained by The Crimson, Jillson urged Dhanda to withdraw his lawsuit “for the good of Harvard Square and for the good of our community.”

Several managers of Harvard Square businesses declined to comment on the lawsuit and the possibility of recreational dispensaries coming to the area.

Getting the Green Light

With recreational marijuana now legal in Massachusetts, pot shops could begin to roll up to the streets of Cambridge.

Last November, Cambridge residents overwhelmingly voted “yes” on Question 4, and the Massachusetts legislature’s July marijuana bill made it harder for the city to go back on that decision.

To address the issue of local control over pot shops, that law put in place a compromise provision that requires towns and cities that voted “yes” on Question 4 to pass another referendum if they wish to ban the opening of recreational marijuana stores. In municipalities that voted “no,” however, local elected officials could make that call.

The law also capped the tax rate on retail marijuana purchases at 20 percent, gave oversight power of marijuana regulations to a five-person Cannabis Control Commission, and set July 2018 as the start date for recreational sales.

Since Cambridge voted “yes” on Question 4—with 71.6 percent of voters casting a ballot in favor of marijuana legalization—Cambridge residents are unlikely to block pot shops. State cannabis regulators are slated to finish writing regulations by March 15, 2018 and will begin accepting applications for recreational licenses on April 1, 2018. 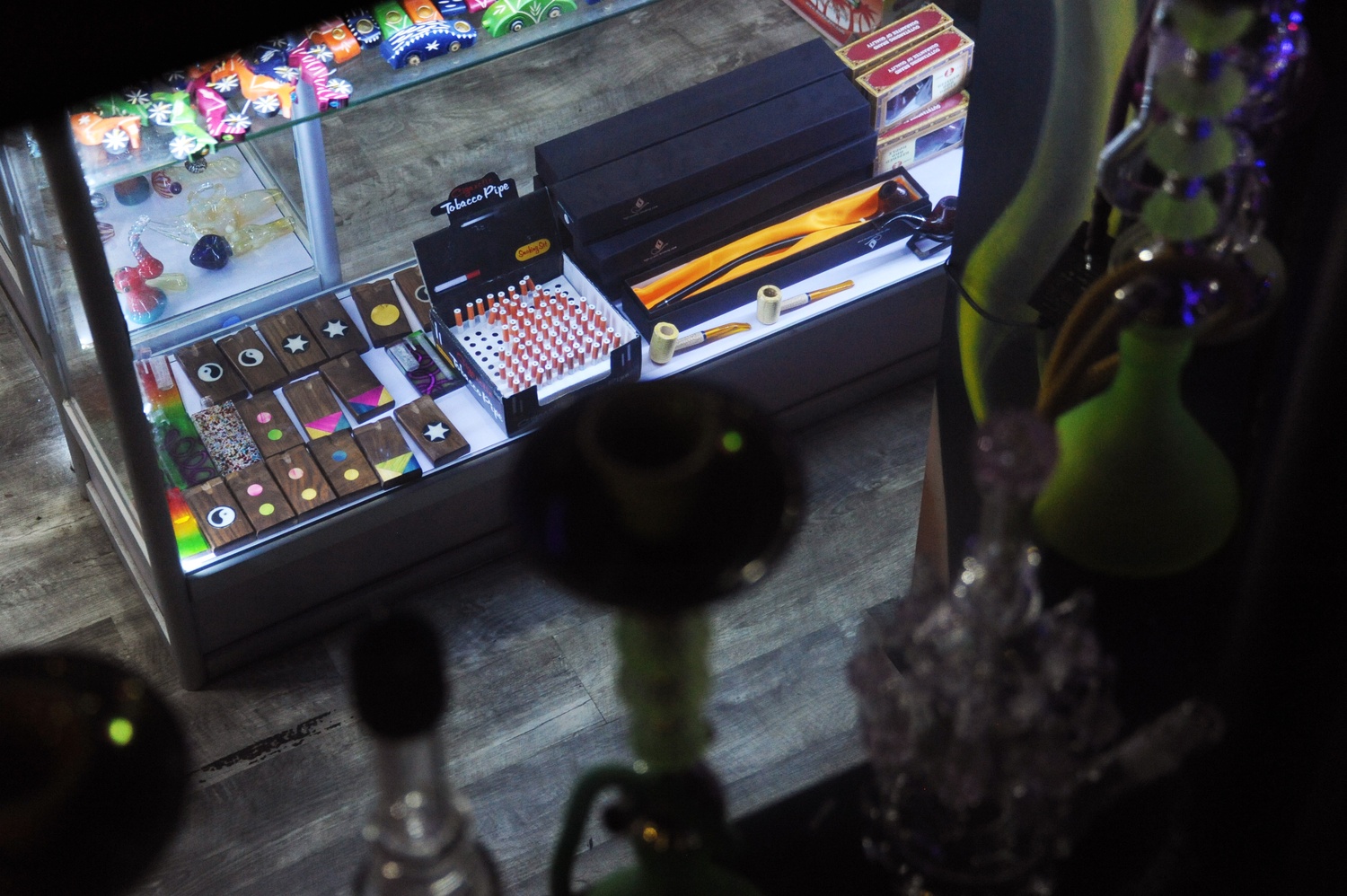 Pipes and other paraphernalia on display at Boston Smoke Shop. By Derek G. Xiao

At the moment, Cambridge only has zoning ordinances for medical marijuana, and the City Council still needs to determine zoning rules for recreational outlets, according to Jeff Roberts, the senior manager for zoning and development in the Cambridge Community Development Department.

Since the city government has not completed this process, recreational companies have yet to make moves to open up establishments in Harvard Square.

“We haven’t seen any movement. We haven’t heard of any recreational marijuana shops coming to Cambridge or to Harvard Square, at least not at the moment,” said Jillson. “There is a lot of work that needs to be done in order to get to that point, both I think at the state level and certainly at the city council level,” she said.

If pot shops do come to the Square, business owners and Harvard affiliates don’t predict that they will make major waves.

“I don't really forsee a lot of changes,” Rosaline Kovacs, owner of Shays Pub and Wine Bar. “I think that already there's a lot of people that smoke. I don’t see this area getting a lot of undesirables—I mean it does have some already, obviously, but I don’t think this is going to be a huge problem.”

Economics lecturer Jeffrey A. Miron said he predicts the tax revenue from pot sales will be negligible, and that the overall effect on the local business community will be “very small.”

Dhanda, though, will continue to oppose any effort to bring marijuana to the Square, his lawyer said.

“Should a proposed recreational shop impinge upon any of his property holdings, Mr. Dhanda will take all necessary precautions to preserve and protect the integrity of the surrounding community,” Schlager said.

But marijuana shops need not worry about facing any extra scrutiny from the Cambridge Police Department.

“If [marijuana shops] are approved, they will be treated like any other business in the city and enforced as appropriate,” said Jeremy Warnick, a spokesperson for the Cambridge Police Department.

While recreational marijuana businesses clearly have a legal right set up shop in Harvard Square, students’ ability to frequent them is more cloudy. Since the legalization of marijuana in Massachusetts, the University has stood firm on its long-standing policy prohibiting drug use.

Because Harvard receives federal funding, the University would jeopardize those funds if it moved to permit marijuana or any other drug on campus.

"We follow federal law on this, and so, federal law prohibits this,” said the College’s Dean of Students Katherine G. O’Dair. “Massachusetts law is new, but our policy has not changed.”

The College has had to adapt its messaging to students in the wake of the drug’s legalization statewide. Earlier this year, the Faculty of Arts and Sciences voted to add a clarifying statement—proposed by Dean of the College Rakesh Khurana—to the College’s policy in the student handbook.

Despite changes to Massachusetts law, “federal law prohibits the possession, use, or distribution of marijuana, including for medical purposes, on Harvard property or as part of a Harvard activity,” the handbook now reads. 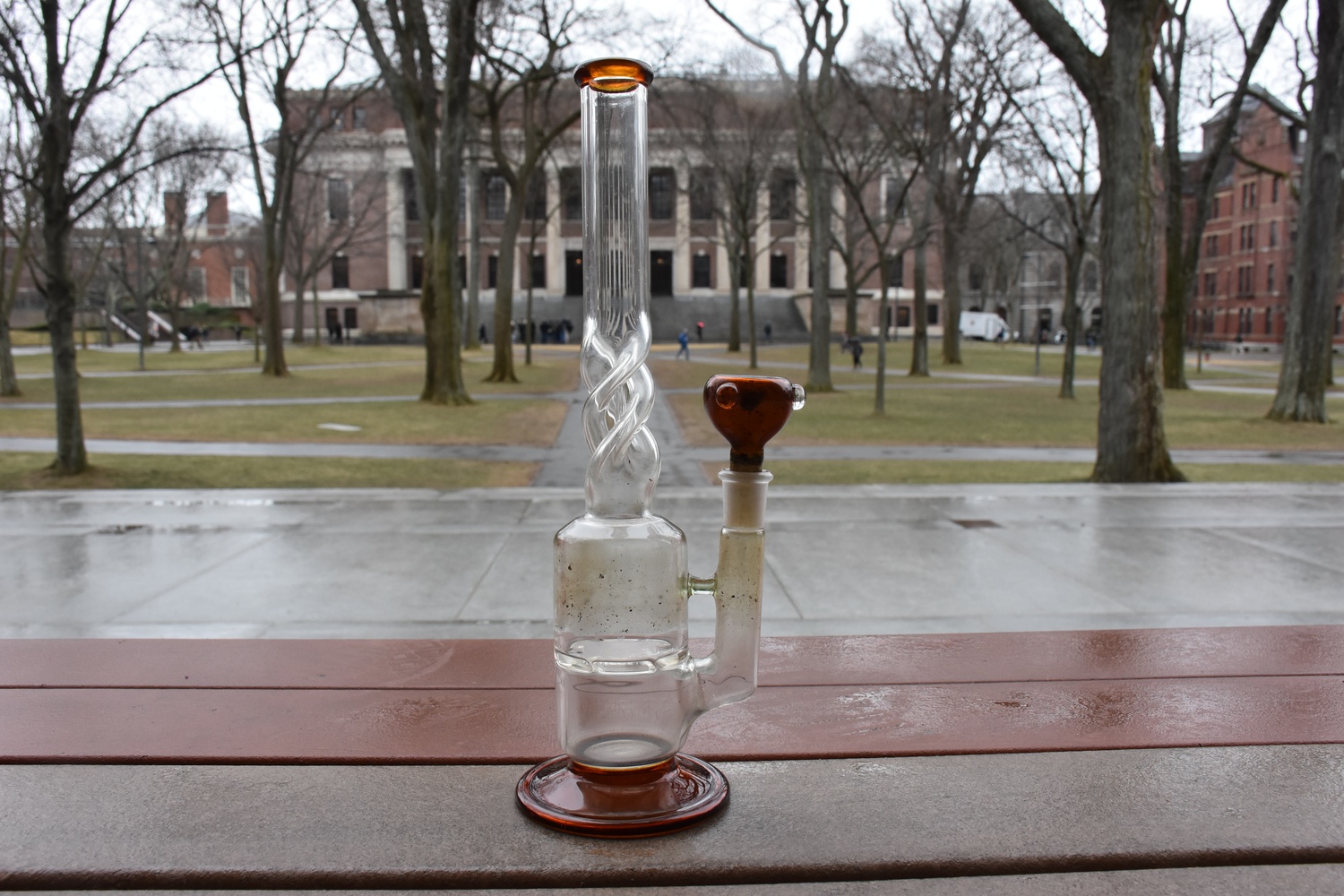 While it remains illegal, though, the University follows specific protocols for handling breaches of the policy. In a statement, Harvard University Police Department spokesperson Steven G. Catalano outlined the process it follows when a student is found with marijuana.

“Per the College Student Handbook, despite the recent changes to state law, the possession of marijuana still is prohibited by federal law and University policy,” said Catalano. “If the HUPD encountered students in possession of marijuana, then officers typically would confiscate the marijuana and report the matter to the appropriate dean of students office.”

The College’s light-handed approach to punishment, though, remains just as consistent as its policy. In the past five years, a total of only 56 cases of drug use—not limited to marijuana—have come before the Administrative Board, the College’s primary disciplinary body.

The vast majority of those who come before the Ad Board for drug-related offenses receive only a “House Warning.” Since 2013-2014, the disciplinary body has distributed between 10 and 12 of these warnings each year. Jasmine M. Waddell, resident dean of Elm Yard and a member of the Ad Board, said there has been no noticeable change to those figures so far this academic year.

“With regard to just having a bag of marijuana in the dorm, that’s something that we will also address and with either [smoking or possession], there will be educational intervention through the Office of Student [Life],” Waddell said. “But you’re not going to be arrested or kicked out or anything like that, but there will be a reaction or a response.”

Administrators are more concerned about students dealing marijuana than smoking it, Waddell said.

“The thing that we worry about is distribution,” she said. “If you have a big enough amount of anything, and we think you might be distributing, that becomes a different issue. That is a legal issue.”

Catalano echoed Waddell’s statement about the harsher punishment for distributors. “Students and others distributing drugs would be subject to arrest for that behavior,” he said.

The line between University jurisdiction and Massachusetts law is still hazy, though, and it is unclear what actions would be taken towards Harvard students who purchase and smoke marijuana off campus. Cambridge Police Department spokesperson Warnick said the department will enforce laws on the state books.

“We enforce the law(s) as they are constituted,” Warnick wrote in an emailed statement.

Amid this ambiguity, many students are still reluctant to talk about their opinions on the drug on the record: More than a dozen students declined to comment for this story.