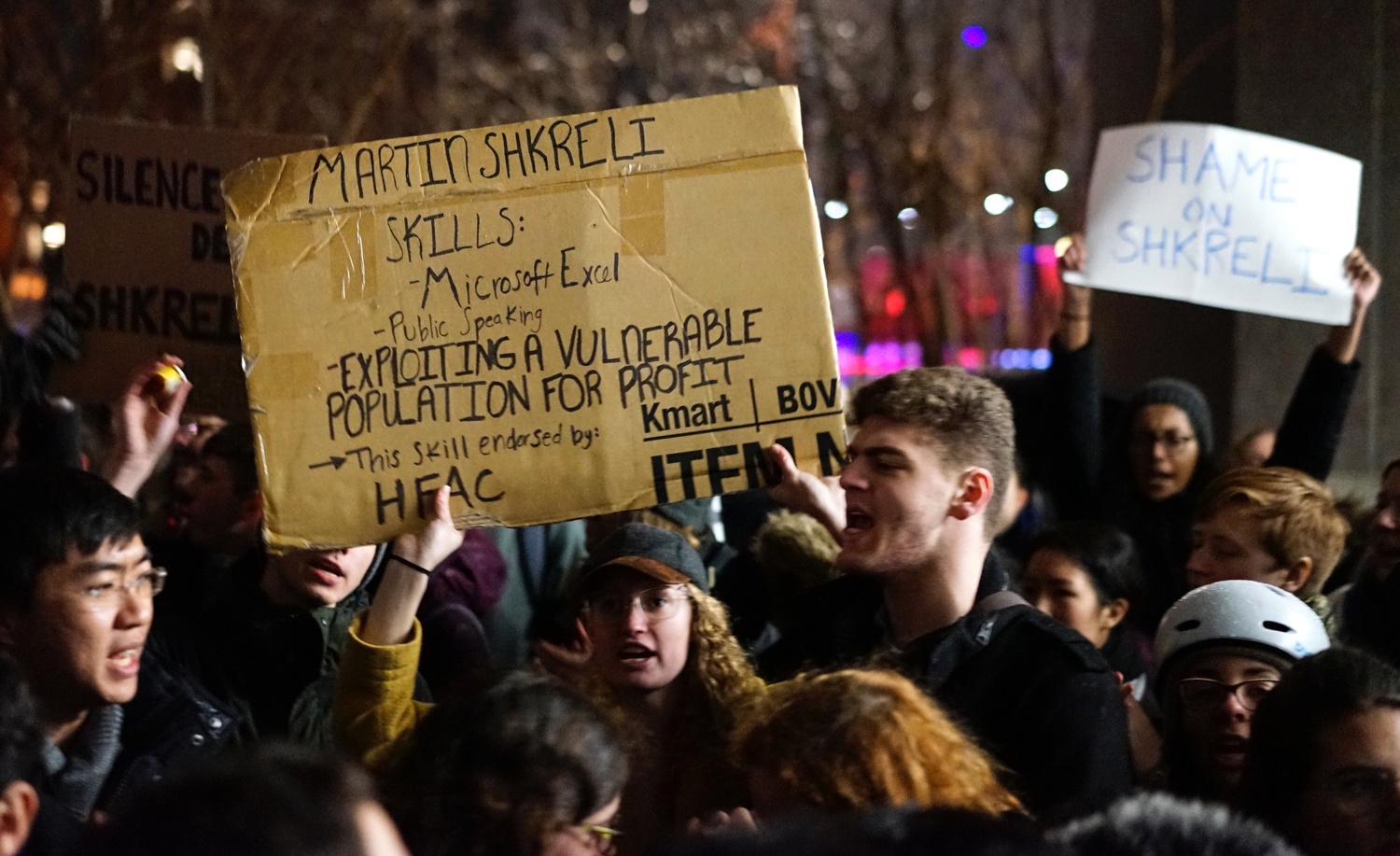 The Harvard Financial Analysts Club invited Shkreli, who has been indicted for securities fraud and is awaiting trial on $5 million bail, to speak at the University. HFAC limited the event to only Harvard undergraduates and closed it to the press.

Shkreli—dubbed “the most hated man in America” —was scheduled to begin speaking at 8:30 p.m. But before he could start, someone set off a fire alarm in the building, according to Harvard University Police Department officials.

HUPD officers at the event said that the fire alarm was set off intentionally but could not confirm who was responsible. Following the alarm, officers escorted protesters and attendees outside, where they waited for nearly half an hour in the rain before re-entering the building.

As attendees settled back into their seats in the lecture hall, HFAC President of Finance W. Connor Roberts ’18 read a statement outlining the Faculty of Arts and Sciences’ “guidelines on free speech” that he said would govern the event.

Protesters, however, did not refrain from disruption. Around fifteen minutes into Shkreli’s speech, approximately 25 students in the 250-person audience stood up and exited the hall, encouraging attendees to move to a “teach-in” panel on AIDS treatment and unethical pharmaceutical practices in the lecture hall next door. The Harvard College Global Health and AIDS Coalition organized the competing event. 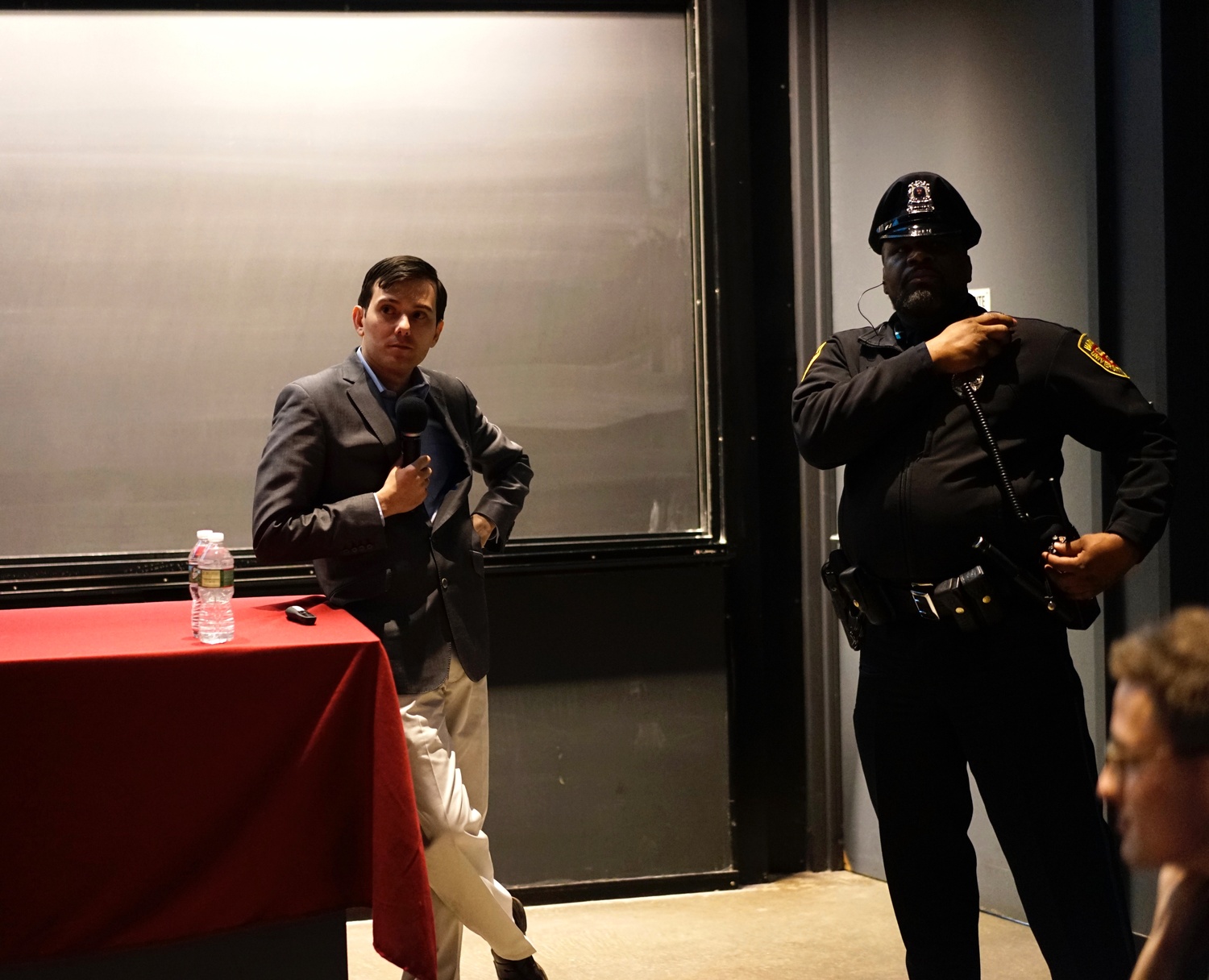 Martin Shkreli speaks in the Science Center on Wednesday night at an event organized by the Harvard Financial Analysts Club. Protesters disrupted the event, standing up, walking out, and encouraging others to move to a “teach-in” panel on AIDS treatment and unethical pharmaceutical practices. By Jason K. Thong

“Nobody cares, goodbye,” Shkreli said as the first wave of protesters exited the hall. “Take an economics class while you’re at it.”

As Shkreli resumed his speech, the heckling continued. “Martin Shkreli is a sexual predator!” one student shouted.

“I have a tame sex life. I have a girlfriend, we have sex once a week, it’s consensual,” Shkreli responded, after trying to engage with the protesters.

“Martin Shkreli is a racist!” another student shouted minutes later.

“How am I racist? I’m friends with Lil Wayne.” Shkreli said as the audience applauded. “Maybe that was racist.”

Shkreli also made repeated references to his personal life and political views during his remarks. Near the conclusion of his speech, Shkreli showed a slide of journalist Lauren Duca, calling her “the love of my life.” Twitter suspended Shkreli’s account after he engaged in what a Twitter spokesperson characterized as “targeted harassment” towards Duca.

Several administrators, including Dean of the College Rakesh Khurana and Dean of Students Katherine G. O’Dair, were present at the Science Center as the protestors clashed with event attendees and staff. Khurana said he chose to attend the events unfolding at the Science Center to make sure students were “safe.”

A heavy presence of Harvard University Police Department, Securitas, and plainclothes police officers blocked off the Science Center for Harvard ID holders only, forcing some protesters to continue their demonstrations outside.

Darshali Vyas, a Harvard Medical School student, said she came to express her outrage at Shkreli’s actions as a pharmaceutical executive. As the founder and chief executive of Turing Pharmaceuticals, Shkreli hiked the price of Daraprim—a drug used to treat patients with compromised immune systems from diseases like HIV/AIDS—from $13.25 to $750 per pill, drawing widespread contempt.

“I am infuriated that this man has hiked up the price of one of the essential medications, one of the only drugs we have to treat toxoplasmosis, by 5000 percent, making it unaffordable for people who need it. This disproportionately affects people who are poor, patients of color, and patients who don’t live in the U.S.” Vyas said.

Shkreli, discussed the price hike during event’s question and answer segment; he said the drug had been previously underpriced, and that his primary reason for hiking the price was “obviously to increase profit for the shareholders.” He further defended the price hike by saying that the drug was 70 years old and in dire need for improvement, which required increased financial investment.

“It’s that everyone was getting a free ride before, not that this is price gouging,” Shkreli said during his speech. Adding that that 1,400 people currently receive Daraprim for free, “I wish no one got it for free, but the rules are they get it for free,” he said.

In a Facebook page promoting Shkreli’s appearance, HFAC wrote that the event was closed to the press, and at the event, security personnel initially tried to bar Crimson reporters from entering.

Attendees were asked to submit questions for the question-and-answer segment online prior to the event. “We welcome all questions with exception to those pertaining to Mr. Shkreli's personal life and his pending court case,” HFAC wrote in a Facebook post.

The Office of Student Life was in contact with organizers of both Shkreli’s event and the teach-in during the day Wednesday. In an statement emailed Wednesday, Assistant Dean of Student Life Alexander R. Miller wrote that the office helps students plan “events of all kinds, including both events tonight.”

“It is important that our commitment to freedom of speech is upheld and that conditions are set for ideas to be expressed and challenged through respectful discourse,” Miller wrote.

The Harvard Financial Analysts Club did not respond to repeated requests for comment.