No. 3 Harvard captures the Ivy crown outright for the first time since the 2005-2006 campaign 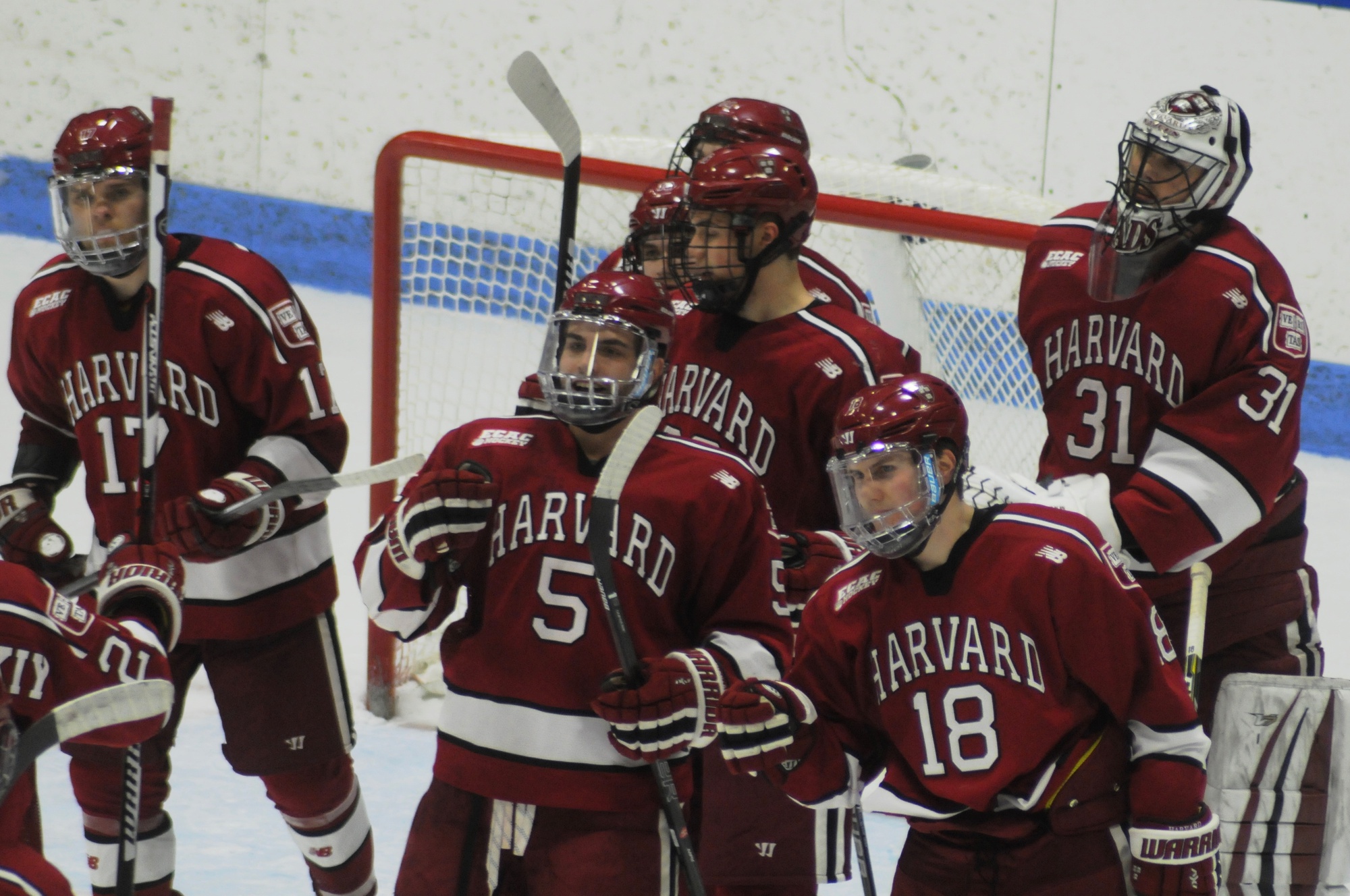 Netting four goals against Yale for the first time in its last 17 tries, No. 3 Harvard finally reversed its regular-season woes at the Whale, securing the outright Ivy League championship for the first time since 2006 with a 4-2 victory over the Bulldogs.

“I think our guys were understanding of the fact that if we could win tonight, we could win the Ivy League title outright,” Harvard coach Ted Donato ’91 said. “I think that means a lot to our group. It was one of the goals they set early in the season.”

Just a year ago, the Crimson made its annual trip to Ingalls Rink staring down the same set of circumstances, needing one point to secure sole possession of the league crown. But Harvard came up short, and following a tie in its final Ivy League contest, the Crimson was forced to share the title with its New Haven nemesis.

That Yale team finished 19-9-4 and cracked its sixth NCAA tournament in eight years. This year’s Bulldogs, on the other hand, could be on their way to their first losing season in a decade. And against this struggling squad, Harvard—now a winner of seven straight games—did not waste a second chance at a championship all for itself.

In front of a capacity crowd of 3,500 on the first night of the Yale icemen’s Alumni Weekend, the Crimson (19-5-2, 13-4-2 ECAC) secured its first regular-season victory at the Whale since January 2005. Harvard mustered a season-low of only 20 shots, 26 fewer than it registered in Monday's Beanpot championship where the Crimson was faster and more crisp, according to Donato. But even on an offensive off-night, Donato's squad led practically from start to finish. 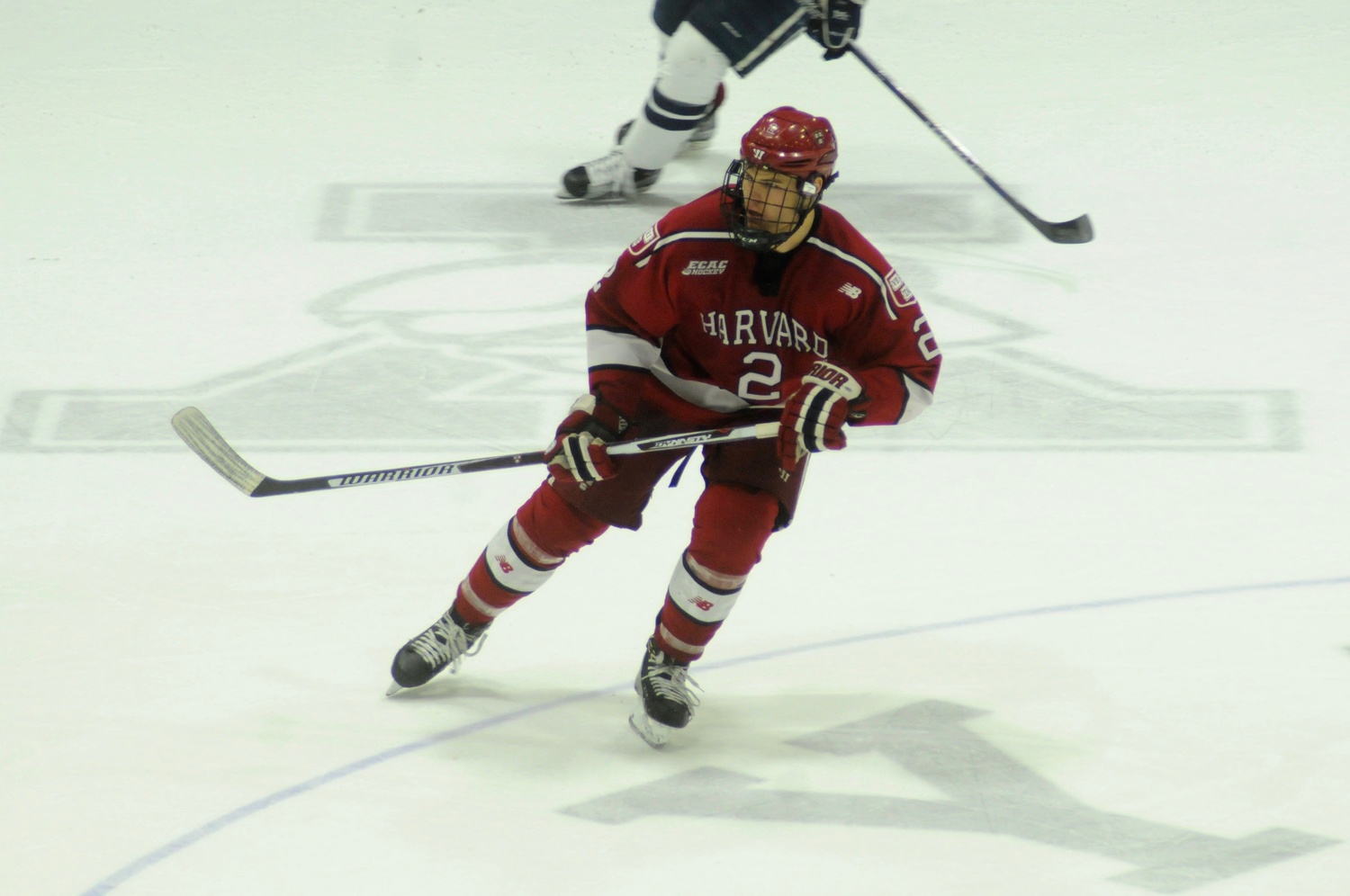 Senior forward Tyler Moy scored the Crimson's first and fourth goals of the night on Friday. By Jake Meagher

Fresh off a two-assist night against Boston University, senior forward Tyler Moy netted his 13th and 14th goals of the season, beginning with Harvard’s first score less than eight minutes in off a feed from classmate Sean Malone behind the net.

The hosts earned an opportunity to pull even on the power play early in the second period, but the Crimson’s penalty-killers had other ideas. With the Bulldogs (10-11-5, 6-9-4) in formation inside the Harvard zone, junior Jake Horton blocked a Henry Hart point shot and knocked the defenseman off the puck, allowing senior Luke Esposito to push forward and eat clock while the Crimson completed a change.

But realizing he had only one man to beat, Esposito turned on the jets along the right boards upon entering the offensive zone. Circling around Yale senior Frankie DiChiara, the senior drifted towards the cage at full speed and netted Harvard’s 10th shorthanded goal of the season right above the crease.

Thanks to Esposito’s goal and a perfect 6-for-6 performance by the penalty kill, the Crimson finished plus-one shorthanded despite playing down a man for 12 minutes. The six-kill result is tied for Harvard’s best statistical showing of the year, and the Crimson is now 13-for-14 over its last three games against quality competition—No. 7 Union, No. 4 Boston University, and now an Ivy League rival.

“I thought our penalty kill was excellent,” Donato said. “It’s the time of year where special teams is important. Trust me, I wish we only had to kill two penalties and not six, but that’s a story for another day.”

On the other end of the special teams battle, Harvard scored twice on the power play for the second game in a row. After the Bulldogs’ Chris Izmirlian and Billy Sweezey took penalties just 32 seconds apart in the back half of the second period, Harvard opened up a 3-0 lead at 15:23 courtesy of its third 5-on-3 conversion of the week. 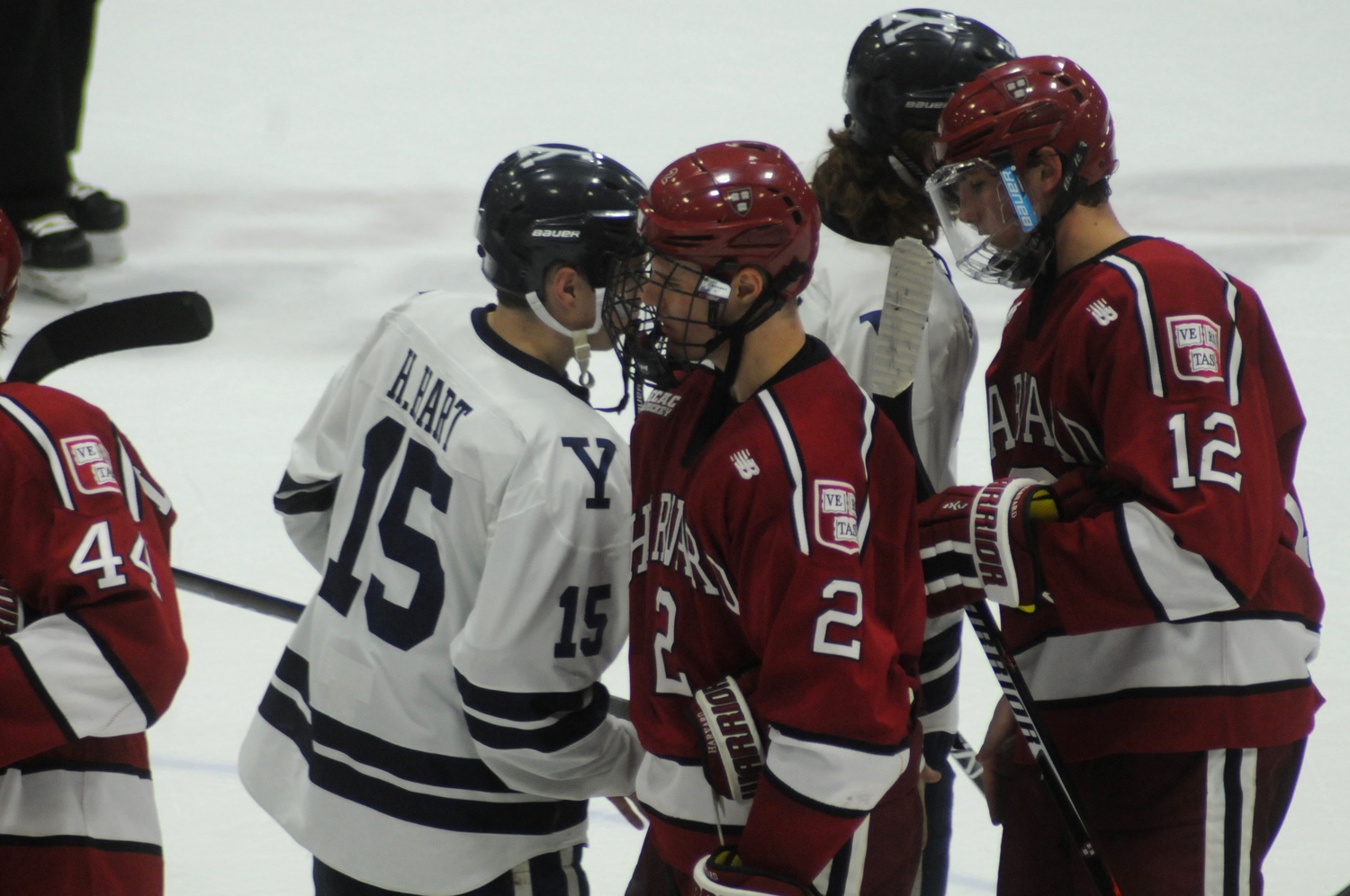 Senior forward Tyler Moy (2) and freshman defenseman John Marino (12) shake hands with members of the Bulldogs after Friday's game. The two combined for three of the Crimson's four goals. By Jake Meagher

Senior defenseman Clay Anderson kickstarted the chance, blasting a shot from the top of the slot that hit the end boards and bounced to the bottom of the left circle. There to punch in the rebound was freshman blue-liner John Marino, a former Yale commit, who drew no shortage of boos from the Whale faithful for a celebratory leap into the glass following his first goal since October.

“A win here is just that extra special,” Marino said. “Each time you come here, it’s a battle. It’s always packed, [this] Harvard-Yale rivalry. You’re going to get that every time.”

The Bulldogs remained in contention by grabbing two goals over the final 25 minutes of action. Sophomore Andrew Gaus ripped a powerful shorthanded wrister past Crimson goaltender Merrick Madsen (21 saves) about a minute after Marino’s conversion, and captain John Hayden scored from the slot with 9:47 remaining in regulation. But a Yale miscue sandwiched between the two scores prohibited the Bulldogs from ever pulling back within one.

With the Bulldogs trailing 3-1 early in the third period, Sweezey let go of a standard clear attempt from his own zone, only to hit Moy in the arm with the puck. Suddenly with endless time and space to work on Yale goaltender Patrick Spano, Moy got the netminder to bite on a head fake, ripping home his second goal of the night and allowing Harvard to get comfortable in the game’s final frame.

With the Ivy League title now in hand, the next trophy on the Crimson’s radar is the Cleary Cup, which is awarded to the ECAC’s regular-season champion. Despite riding a nine-game unbeaten streak, Harvard still remains one point behind Union for the top spot in the conference. But three conference games still remain.

“So far, two trophies is awesome,” Marino said. “But we’re definitely not done yet. Not even close.”

—While leading 2-0, Harvard appeared to punch in a second shorthanded goal midway through the second period. Thinking pass-first despite staring down an open shooting lane near the slot, Clay Anderson fed a pass to Alexander Kerfoot on his left, and the co-captain discovered twine. However, sophomore Ryan Donato made contact with goaltender Patrick Spano in the crease, which prompted the officials to wave off the goal after a review. Yale's Charlie Curti knocked Donato into Spano, but in accordance with college rules, incidental contact can still produce goalie interference if the netminder is inside his crease and his ability to defend the goal is impacted. And that's what the officials determined had happened.