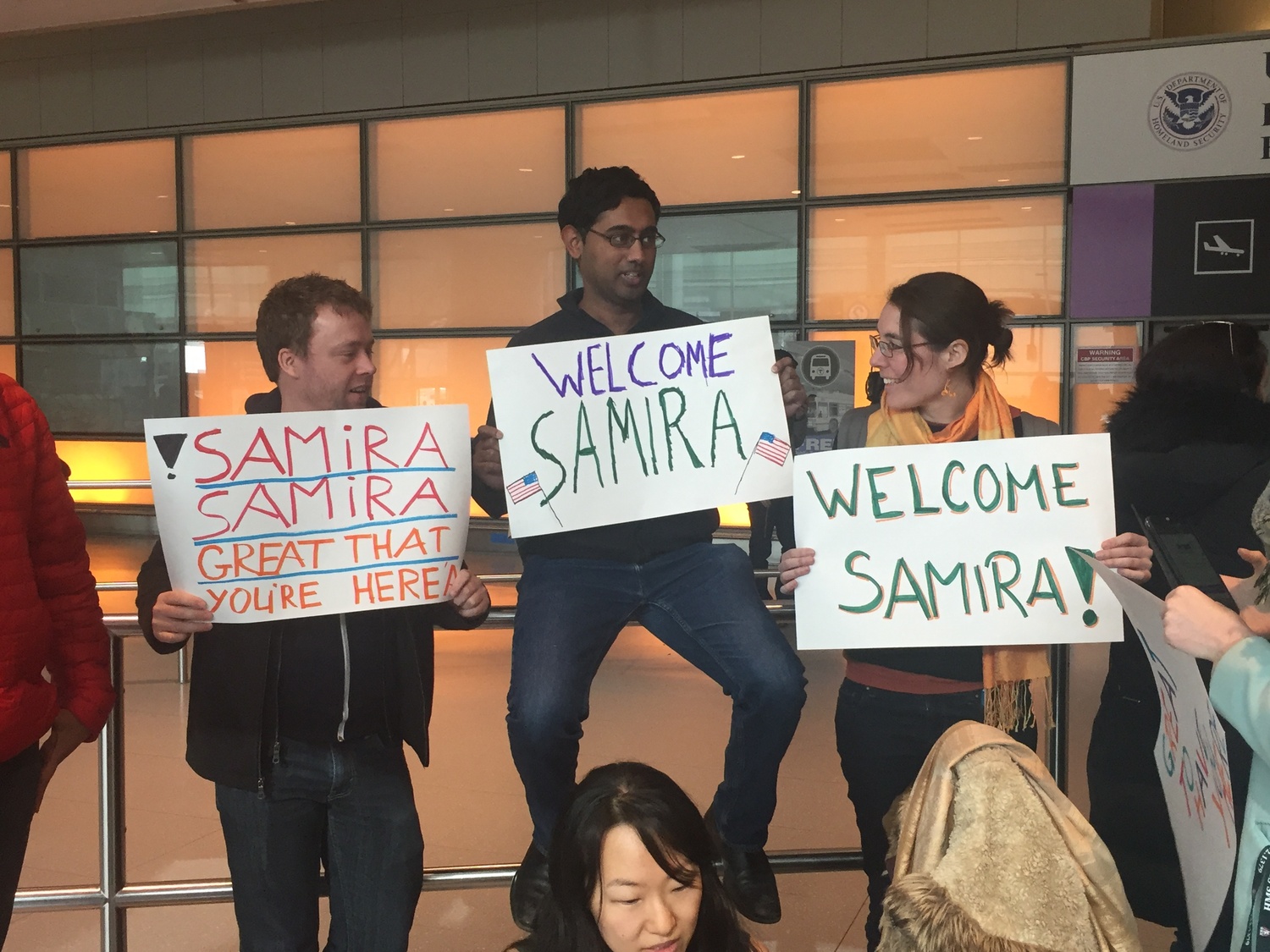 Iranian scientist Samira Asgari stood in front of the security agent at Boston Logan Airport Friday afternoon, unable to believe what she had just heard.

“I asked him, ‘So I can really go?’ And he smiled and said, ‘Yes, yes you can go. Welcome to the United States,’” Samira said.

Gripping her luggage, Samira walked through the international arrivals gate and into the embrace of her friends, lawyers, and labmates from Harvard Medical School, all of them screaming her name. After two failed attempts and a week of sleepless nights, Samira had finally reached the United States to pursue her dream: researching tuberculosis at Harvard.

Samira, along with at least three other Harvard affiliates, was barred from flying to the country a week ago after President Donald Trump signed an executive order suspending immigration from seven predominantly Muslim countries for 90 days. After a Mass. federal judge granted a temporary stay of Trump’s order Jan. 28, three of the four—Samira and Iranian sisters Marzieh and Amene Asgari, who are not related to Samira—flew into Logan Airport over the weekend.

Seyed S. S. Saravi, the fourth Harvard affiliate barred from the United States who had planned to study cardiovascular medicine at the Medical School, wrote in an email Sunday that he was still stuck in Iran, unable to leave due to visa complications.

“I am so happy for the visa holders and hope the best wishes for them,” Saravi wrote. “But, unfortunately, my visa is in hands of US Consular in Dubai [and] my wife’s visa is under processing.”

Samira, Marzieh, and Amene all have valid travel visas and had been planning to come to the United States for months. Samira will join Medical School professor Soumya Raychaudhuri’s laboratory, Amene will perform mathematical modelling for another Medical School laboratory, and Marzieh will conduct research in the Philosophy Department.

On Wednesday, Samira sued Trump and officials from the Department of Homeland Security, arguing she should be allowed in the country. Her lawsuit is ongoing.

Minutes after arriving in the airport, Samira found herself thronged by reporters, cameramen, and wellwishers. Someone handed her a rose, and Congressman Joseph P. Kennedy III—who had traveled specially to the airport for the occasion—leaned in to shake her hand and whisper in her ear.

In a quieter moment, Raychaudhuri told her he “couldn’t believe” she was here. Samira nodded.

Marzieh and Amene said they had a similarly warm welcome when they arrived at Logan Airport with Marzieh’s two-year-old daughter Sophie Saturday evening. Marzieh said she and her sister were mobbed by supporters and lawyers from the American Civil Liberties Union, one of whom “even brought a carseat for my little girl.”

But the warmest welcome came from Mahboubeh Asgari-Targhi, Amene and Marzieh’s sister who works at the Harvard-Smithsonian Center for Astrophysics. Marzieh said Sophie made a beeline into her aunt’s arms.

“Sophie, she was very excited when she saw my sister, they are very, very close,” Marzieh said.

Samira, Marzieh, and Amene all said the past week had been difficult and that they were relieved to reach the United States. The trio emphasized they were grateful for the support they received from friends and strangers alike over the last few days.

“If I wanted to write the story of my life, I think I would definitely mention this in my book,” Amene said.

But Marzieh said she no longer thinks her mother will be able to travel, given the current political climate in the United States. Amene added she hopes Harvard students will take inspiration from her and her sister’s situation.

“There are things when you are very young, in your early twenties, you take for granted: traveling somewhere, seeing your family,” she said. “Those who are students now, they will be politicians and leaders in the future. I think they should change these things so it is easy for everyone.”

“Imagine, if this ban wasn’t in place, I could see my mother,” Amene added.

Reflecting on the last few days, Samira said she navigated what she called a “nightmarish week” by drawing on her training as a scientist. She said research can often be frustrating, and demands persistence.

“You need persistence to get not only the result that you wish but the result that convinces you it’s correct, and this doesn’t happen for a day or week or month, usually it takes years,” she said. “I think that persistence that I have innately but also that has been trained through my career as a scientist helped me to go through this.”