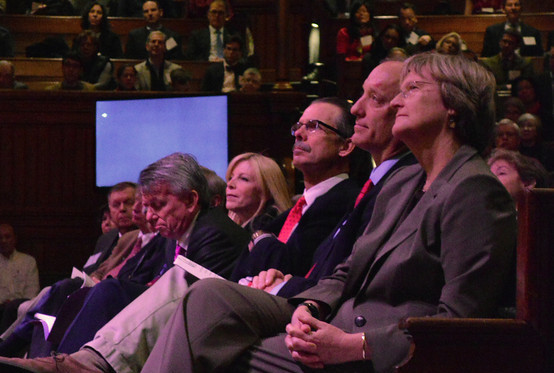 Harvard raised $1.19 billion in fiscal year 2016, marking the University's largest fundraising haul in a single year and surpassing Stanford for the first time since 2014, according to the Council for Aid to Education.

Fiscal year 2016 marks the third consecutive year the University has raised over $1 billion since the public launch of its $6.5 billion capital campaign in 2013. As of September, the University had raised more than $7 billion in its record-breaking drive. 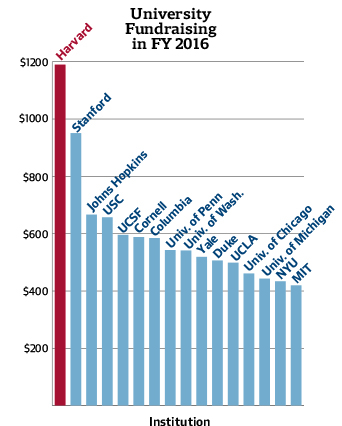 For nine out of the last eleven years, Stanford has been more successful than Harvard in its annual fundraising. Stanford drew in $951 million in gifts during fiscal year 2016, according to the Council’s annual study.

This particularly high fundraising figure comes in a year when higher education institutions collected an unprecedented number of donations. According to the study, colleges and universities in the United States collectively raised nearly $41 billion in fiscal year 2016.

“Harvard is fortunate to have a community of alumni and friends who, each year, support our mission of teaching and research,” University spokesperson Patrick S. McKiernan wrote in a statement. McKiernan added that donations to the University support financial aid and research funding, among other endeavors.

The particularly successful fundraising year comes as declining revenue streams could “significantly constrain” budgets across the University. The value of Harvard’s endowment sunk by almost $2 billion in fiscal year 2016, and Harvard Management Company expects its returns to be low in the future. Administrators are also concerned that federal funding levels could drop.

According to Ann E. Kaplan, the director of the study, the largest three donations from individuals to Harvard in fiscal year 2016 were $60 million, $50 million gift, and $30 million gifts, but Kaplan said those figures denote payments and not pledged or incremental gifts, like John A. Paulson’s $400 million gift. The Council for Aid to Education only collects data about the top three gift amounts.

Alumni donations to Harvard were down from fiscal year 2015, dipping from $650 million to $613 million, Kaplan said. But the numbers are still far higher than two years ago, when the University collected less than two-thirds of that number—$393 million—from alumni.

“They fit the pattern, but you can see where the pattern doesn’t tell the whole story,” Kaplan said.

Harvard received $134 million from individuals other than parents and alumni in 2016, Kaplan said, nearly double the figure from the previous year. Parent donations also increased sharply, from $43 million to $85 million.

University administrators at a fundraising event By Y. Kit Wu

Michael T. Kerr ’81, co-chair of the executive committee of the Harvard College Fund, said last month that raising more than $1 billion in a single year remains unusual despite the recent trend.

“It’s been the number during the campaign. When you get through the campaign we’re gonna go down to a lower number,” Kerr said. “You’re supposed to stretch the system during a campaign, and hopefully your loyal alums stretch a little more than they normally would because of some goal that they’re interested in.”

Another alumnus, Paul A. Buttenwieser ’60, said last month that such a benchmark could only be reached if Harvard can justify the donations.