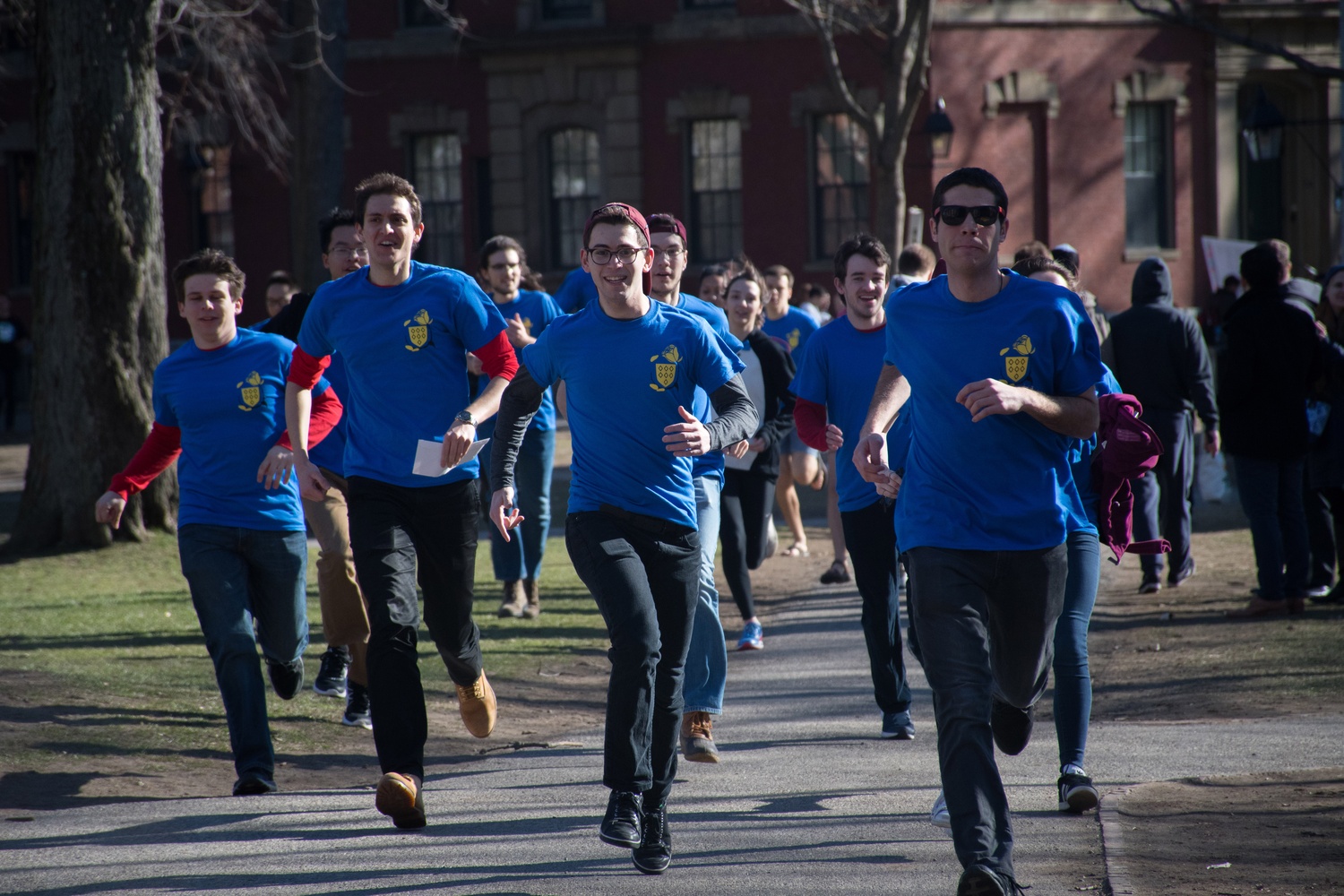 Residents of Quincy House run across the Yard towards a freshman dorm to welcome members of the Class of 2020 to their new upperclassmen House. By Megan M. Ross
By Junina Furigay and Kenton K. Shimozaki, Crimson Staff Writers

Students clad in festive House attire played horns and took pictures as they gathered around the John Harvard statue to welcome first-year students to their upperclassmen Houses, where many students reside until graduation.

The celebration started in the early hours of the morning as each of the HoCo chairs gathered students in their respective Houses for breakfast and cheers before storming Harvard Yard. Dean of the College Rakesh Khurana, who is also a Faculty Dean in Cabot House, joined the Housing Day revelry, cheering while hoisted on the shoulders of a student near the John Harvard statue.

Dean of Students Katherine G. O’Dair, who began her new role leading the College’s Office of Student Life in August, said experiencing Housing Day for the first time was “amazing” and that she has been excited for the campus tradition since she came to the College.

“People have talked about this since I interviewed,” O’Dair said. “It’s everything everyone said and more. I just love the House spirit, I love the energy, especially this early in the morning.”

Students said they were especially excited to be placed in Winthrop House, which will re-open in August following a year of renovations. New facilities in the House will include a student lounge called the Lion’s Den, a two-story grille, and rooftop terrace, all located in the new Beren Hall addition.

“I am excited for the Lion’s Den and the new grille. The grille better have late hours, though, because I need a place where I can get curly fries at 2 a.m.,” said I. Blu Frankel ’20, a future Winthrop resident. “There’s also a sky terrace with glass all around with a 360-degree view that I am very excited about.” 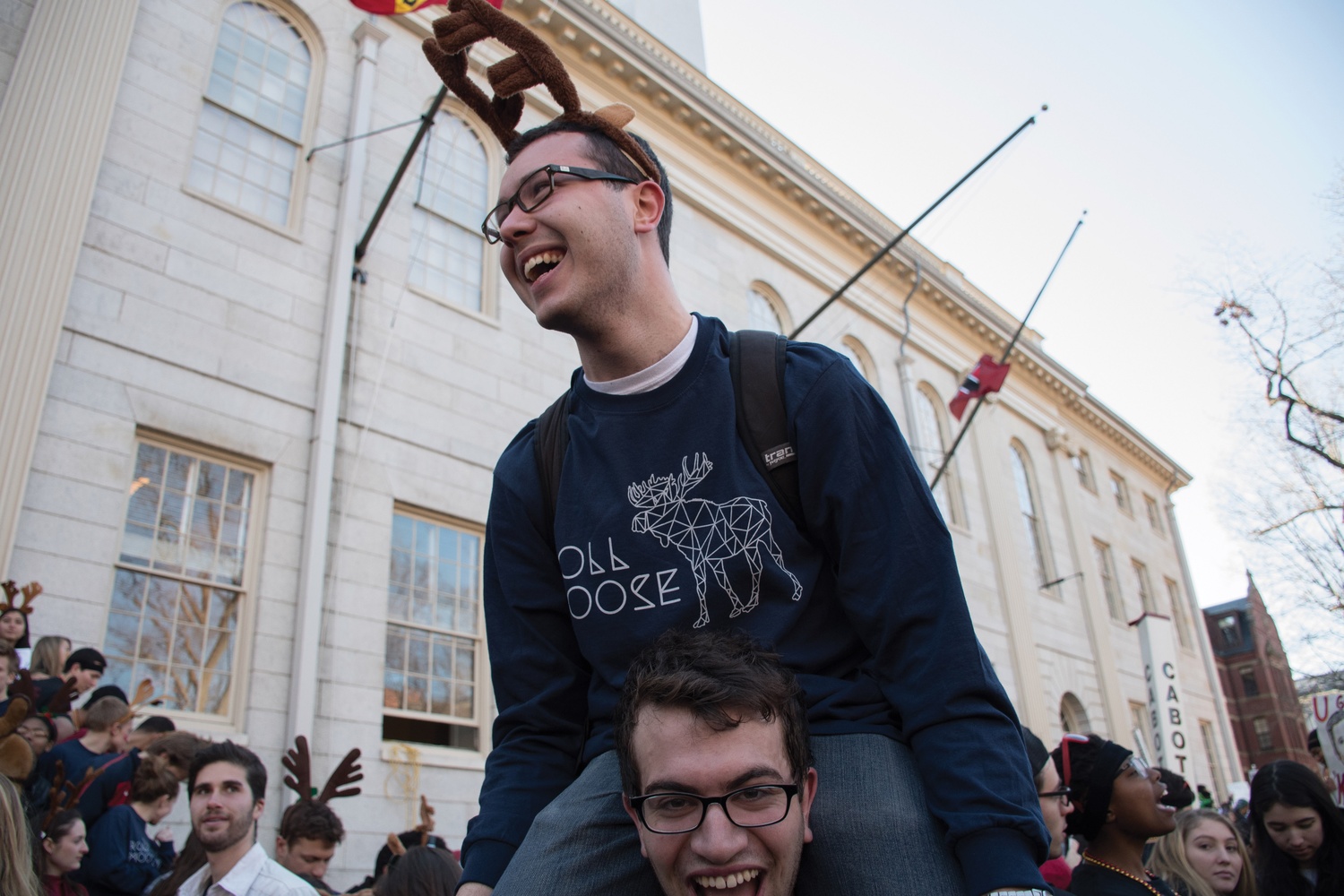 Dunster resident Justin A. Dower ‘17 cheers for his House outside University Hall ahead of the freshman “dorm storming” on Thursday morning. By Megan M. Ross

Freshmen who were assigned to soon-to-be renovated Lowell House, like Connor D. Bridges ’20, said they were optimistic about living in swing housing for the next two years while the building undergoes extensive renovations as part of Harvard’s ongoing House Renewal project. Students living in swing housing occupy the former Harvard Inn and several apartment-style buildings in Harvard Square.

“Since all of the sophomores get stuck together at the Inn, I think the community might be even stronger,” Bridges said. “I remember hearing that Dunster’s community was even stronger when they were in swing housing.”

The annual event occurred against the backdrop of a College committee’s proposal that may eliminate Harvard’s current housing model in favor of one more similar to Yale’s—which would assign freshmen to Houses earlier in their freshman year.

Consistent with previous years, some students were disappointed after learning that they were placed in one of Houses in the Radcliffe Quadrangle, considerably further away from classroom buildings than houses along the Charles River.

“I wasn't that upset at first, but it does kind of ruin Housing Day when people go up to you and say, ‘I'm sorry,’ and, ‘It'll be okay,’ when you tell them your House,” Lily C. Jacobs ’20 said. Jacobs received a housing assignment to Currier House—one of the three Quad Houses.