With a 4-1 victory Friday evening, No. 2 Harvard advances to its third consecutive ECAC championship game 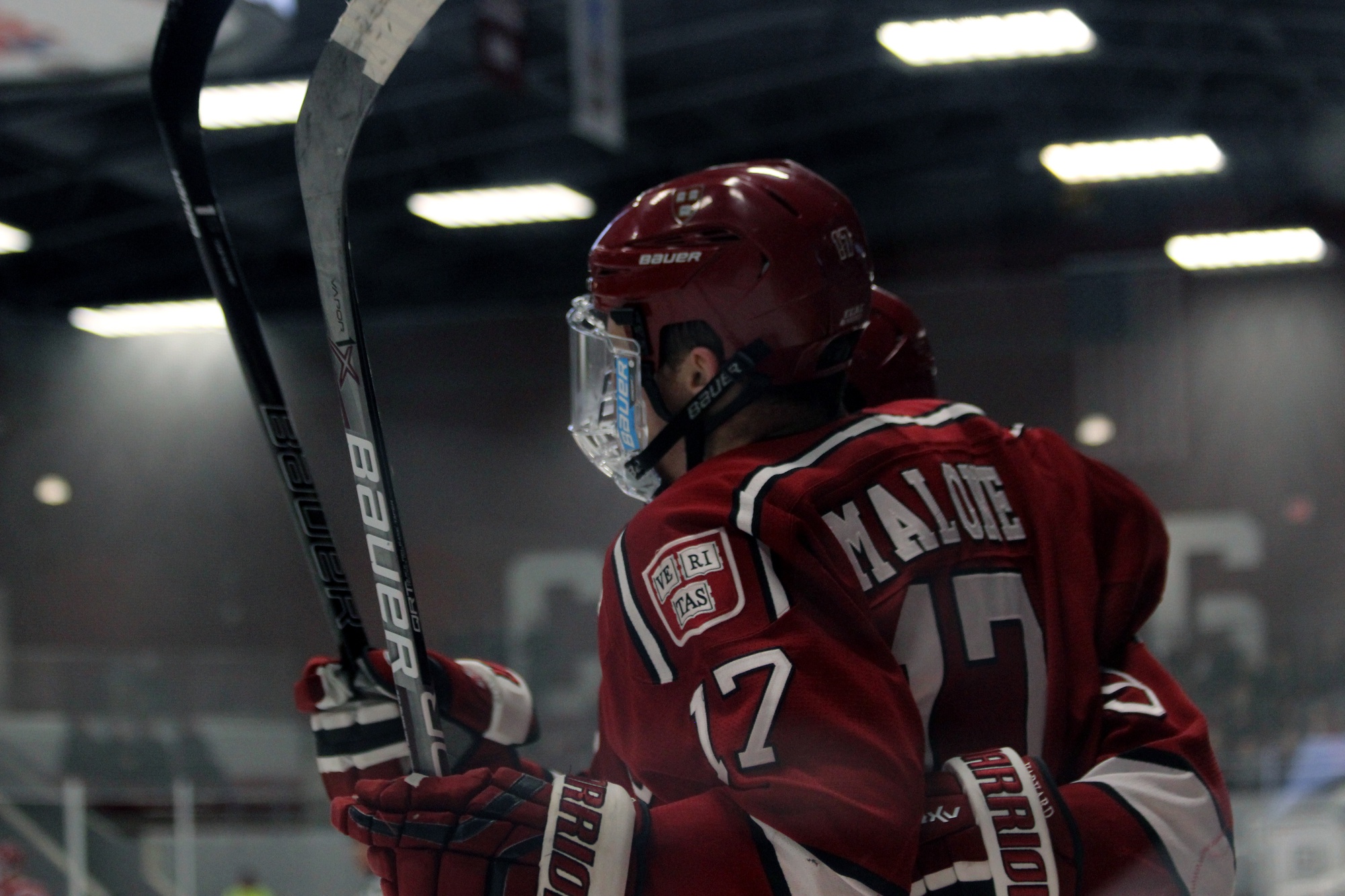 LAKE PLACID, N.Y. — After Harvard’s ECAC semifinals clash with Quinnipiac, Sean Malone’s choice of postgame attire was all too fitting.

Upon emerging from the back of the press room, the senior center made his way to the podium donning the Crimson’s signature piece of headwear—the tradition-laden player of the game hat. Presumably because hat tricks aren’t called hat tricks for nothing.

With the Bobcats fighting to keep their season alive at Herb Brooks Arena on Friday, Malone netted three goals in a game for the first time in his career, lifting top-seeded Harvard to its 13th straight victory and a spot in its third consecutive conference championship game.

“You need your best players to step up, and I think we’ve seen that,” said senior Luke Esposito, Malone’s linemate. “We needed a spark, and the greatest part of our team is it can come from any player. Tonight it was Sean pretty clearly.”

Through three postseason contests, Malone now has a staggering nine points—the same output he had over the entire month of February. The Buffalo Sabres prospect has also scored in all three games against Quinnipiac (23-15-2, 13-8-1 ECAC) this season.

“It feels good to do it in a big game like this,” said Malone about the hat trick. “More importantly, I’m just happy we got the win and [I'm] looking forward to tomorrow.”

On the two-month anniversary of the Crimson’s most recent defeat, Harvard utilized Malone’s three-goal outburst to build a 3-1 edge over the defending tournament champions. The No. 2 Crimson (25-5-2, 16-4-2) then added an empty-netter with 2:05 remaining to close the book on a 4-1 victory.

The scoreline matches that of last season’s championship game, in which Quinnipiac—also the second-best team in the land at that point in time—disposed of Harvard to capture the program’s first Whitelaw Cup.

Of course, these Bobcats aren’t those Bobcats. Despite being picked to finish first in both the media and coaches’ polls at the start of the season, Quinnipiac finished fifth in the conference and had to squeeze out a series on the road at St. Lawrence in order to even make it back to Lake Placid.

But for the Crimson, that hardly mattered.

“We were determined from the beginning to get them back for last year,” Esposito said. “I thought it was a good game both ways, and it was nice way to finish a four-year rivalry with those guys.”

“We’ve had some battles with them the last three years here,” added Harvard coach Ted Donato ’91. “I think in some ways our seniors feel like you really can’t win the ECAC unless you play Quinnipiac along the line.”

The Crimson dominated puck possession essentially throughout, outshooting the Bobcats by a 28-11 margin through the first two periods. Yet, it wasn’t until sophomore fourth-liner Michael Floodstrand laid a hit on Bo Pieper in the Quinnipiac zone midway through the middle frame that Harvard broke a scoreless stalemate.

Floodstrand’s hit jarred the puck loose along the right boards, enabling him to seize possession and feed Malone by the right faceoff dot, where the senior moved in and ripped a wrister past goaltender Andrew Shortridge at 11:00.

The Quinnipiac offense just didn’t get enough going to keep up with Malone’s pace on Friday, but the Bobcats did manage one equalizer thanks to a Jake Horton hooking penalty at 15:13. Quinnipiac’s only shot on goal over the course of its three power plays—a bad-angle attempt from Thomas Aldworth at the bottom of the left faceoff circle—trickled through the pads of Merrick Madsen with 3:44 to go in the second.

But less than a minute later, Harvard jumped onto a power play of its own. And while the Crimson technically failed to convert, Malone punched in his second goal of the evening eight seconds after the penalty’s expiration. With Shortridge unable to corral freshman Nathan Krusko’s shot from the outer edge of the left circle, Malone knocked in the rebound from below the opposite circle.

There would be no more equalizers. Malone put the finishing touch on his hat trick with some nifty stickwork in front of goal 4:04 into the final frame, doubling Harvard’s lead to 3-1. And with 15 saves in the period, Madsen did his part to preserve the advantage.

“Harvard’s the most talented team in the country,” Quinnipiac coach Rand Pecknold said. “They had the puck a lot...and then I think when we had the puck, we played with just a little bit—not a lot—of panic in our game. We needed to possess it and work their D down low. We talked about it all week long; we just didn’t do a really great job of it.”

Pecknold did try pulling out a few tricks to generate an offensive push late in the game, removing his goaltender on a Bobcat power play with all of 7:46 remaining in regulation and then again on a 4-on-4 with a little more than three minutes to go. But ultimately, the only goal-scorer down the stretch would be Esposito, who hit the vacant cage with just 2:05 left.

Friday represents all she wrote for the Bobcats, who—ranked 21st in the PairWise—will not be able to obtain an at-large bid to the NCAA tournament. Meanwhile, Harvard will play for a Whitelaw Cup here Saturday night against Cornell.

—Harvard finished 0-for-4 on the power play, while Quinnipiac finished 1-for-3.

—Quinnipiac's Connor Clifton unleashed what looked like an elbow to the head of Harvard senior Tyler Moy in the final minute of the second period, giving the Crimson a power-play opportunity in what was then a 2-1 game. Many people in the building anticipated Clifton receiving a five-minute major, prompting parallels to last year's championship game when a five-minute boarding penalty against Luke Esposito led to three Quinnipiac power-play goals. But after a review, the officials decided to give Clifton just two minutes in the box.

—Cornell advanced to the championship game with a 4-1 win over Union in Friday's semifinals nightcap.

—Harvard defenseman Adam Fox was recognized as the ECAC Rookie of the Year prior to puck drop. Fox, along with co-captain Alexander Kerfoot, were also named First-Team All-ECAC.