Harvard sets a program record with its 16th straight win, advances to its first Frozen Four since 1994 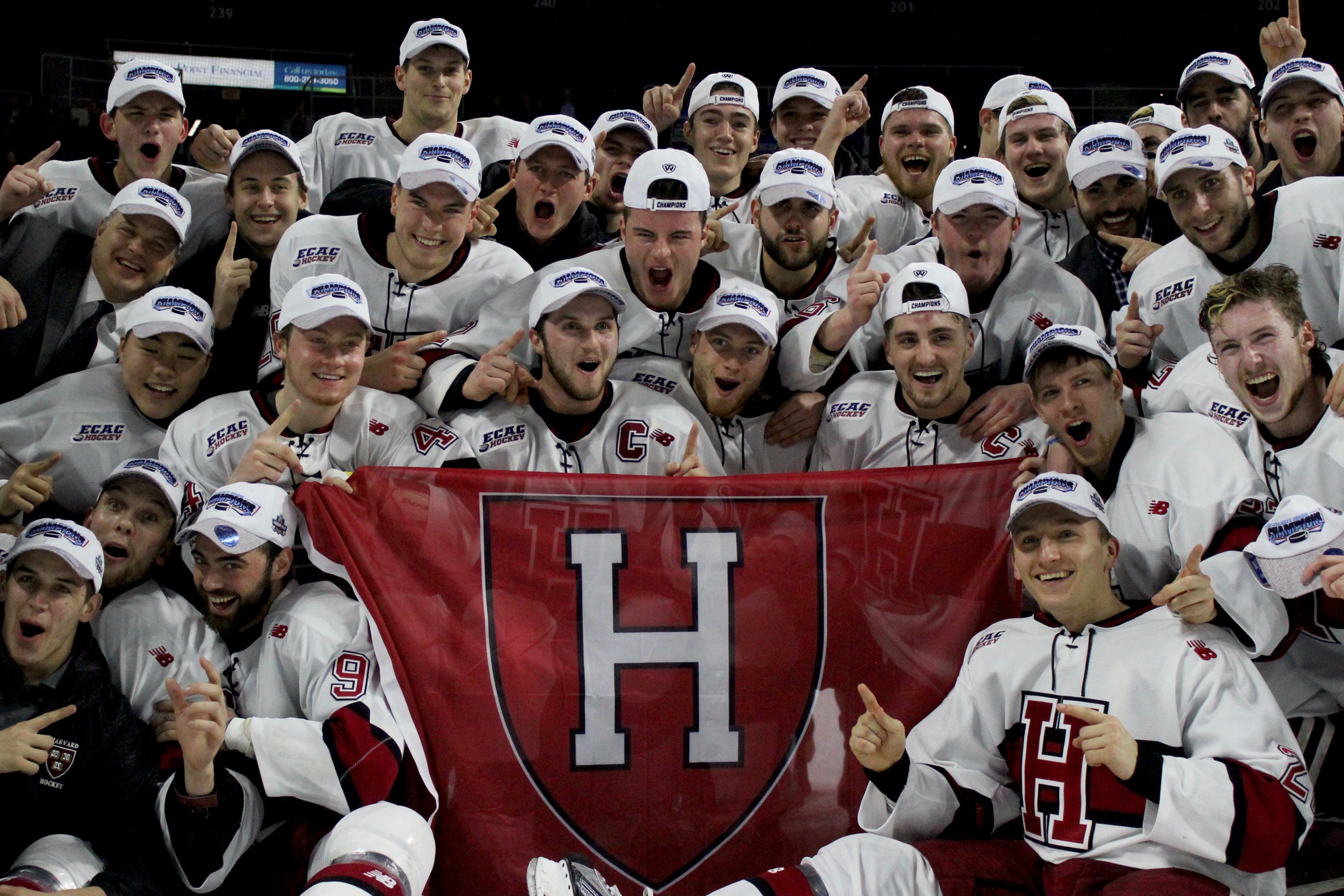 For the first time in 23 years, Harvard Men's Hockey has advanced to the Frozen Four, which this year will be held in Chicago. The Crimson bested the Air Force Falcons on Saturday, 3-2. By Thomas W. Franck
By Jake Meagher, Crimson Staff Writer

PROVIDENCE, R.I. — Better tighten those championship caps. Because Harvard’s off to the Windy City.

One night after snapping a streak of seven straight one-and-dones in the NCAA tournament, the second-ranked Harvard men’s hockey team staved off a resolute bunch from the United States Air Force Academy to become one of college hockey's last four teams standing. The Crimson protected a one-goal lead for the final 28 minutes of Saturday night's East Regional final, hanging on just long enough to secure a trip to the program’s first Frozen Four since 1994.

“It’s a great feeling,” said co-captain Devin Tringale after Harvard’s 16th consecutive victory—a new school record. “It’s something that we’ve worked a long time for. We’ve put a lot of hours in, and for us to get that win tonight and advance to the Frozen Four, it’s unbelievable.”

Midway through the second period, the rout looked to be on, as Harvard (28-5-2, 16-4-2 ECAC) scored twice in a span of 2:03 to open up a commanding 3-0 edge over a Falcon team representing a rather underwhelming Atlantic Hockey conference. Still a dangerous team with victories over No. 8 Western Michigan, No. 16 Boston College, and almost No. 1 Denver, however, No. 15 Air Force (27-10-5, 19-6-3 Atlantic) refused to go away, quickly netting a pair of man-up goals 15 seconds apart to pull within one.

“Obviously that wasn’t the plan,” co-captain Alexander Kerfoot said. “But it’s hockey, you’ve got to just go with whatever happens…. I think we did a good job of not panicking and regrouping.”

Backed by junior netminder Merrick Madsen, who made 27 saves on the night and was named the regional’s Most Outstanding Player, the Crimson fought off the Falcons over the latter half of the contest to set up a Frozen Four date with fellow one-seed Minnesota Duluth April 6 at the United Center in Chicago. 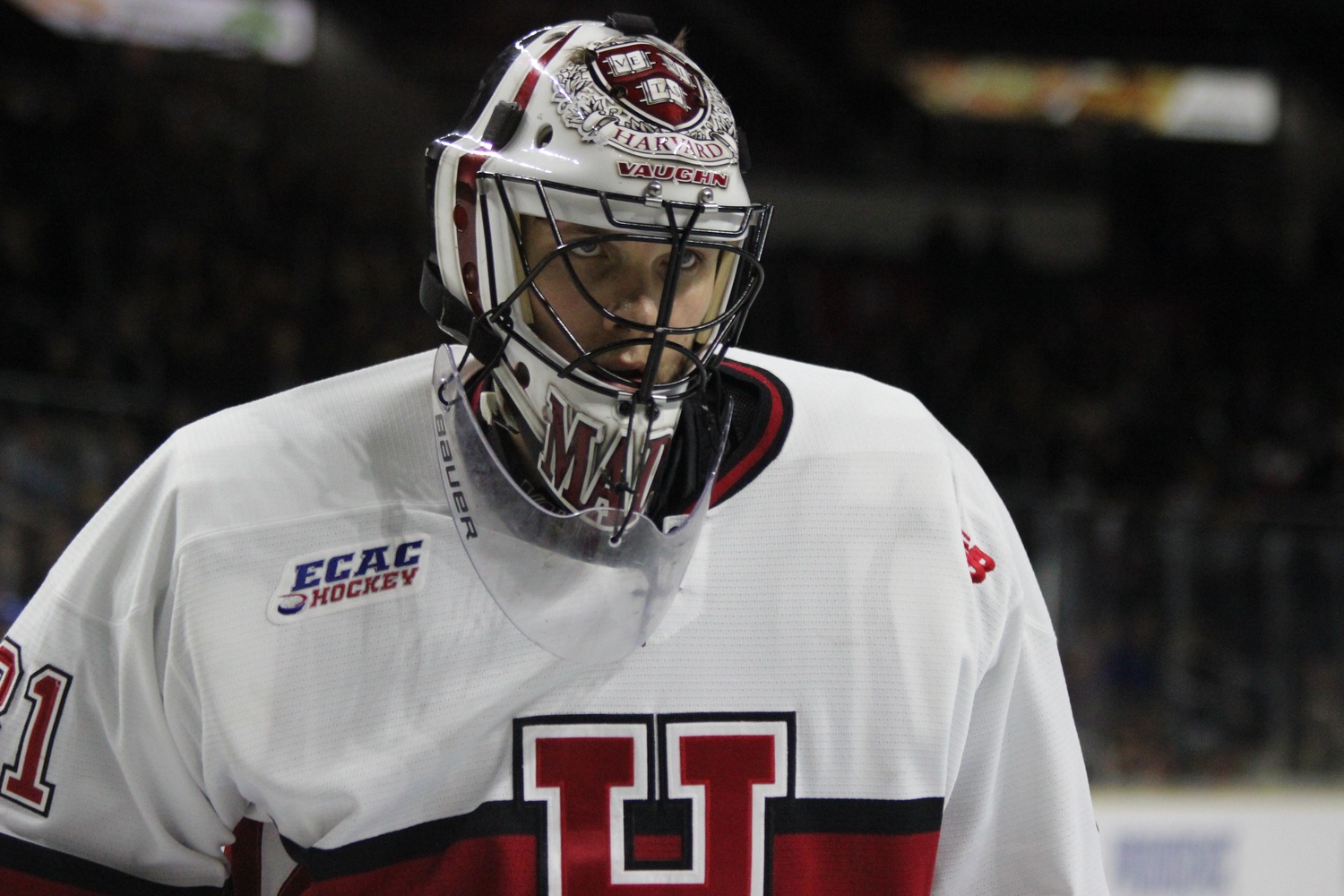 Junior goaltender Merrick Madsen had a total of 68 saves between Friday and Saturday's wins in the NCAA tournament. By Thomas W. Franck

“This is our third consecutive trip to the NCAA tournament, so I think our guys wanted more,” Harvard coach Ted Donato ’91 said. “I think the Final Four is certainly something that our group aspired to. Now that we’ve accomplished that, our sights are set on continuing, and continuing to win.”

Sophomore defenseman Viktor Dombrovskiy put the Crimson on the board 9:54 into the contest, ripping a wrister from the left side of the slot off the chest of Air Force defenseman Kyle Mackey and in. Then fellow second-year Ryan Donato and senior Tyler Moy tacked on two more in the second period to build up Harvard's three-goal edge. 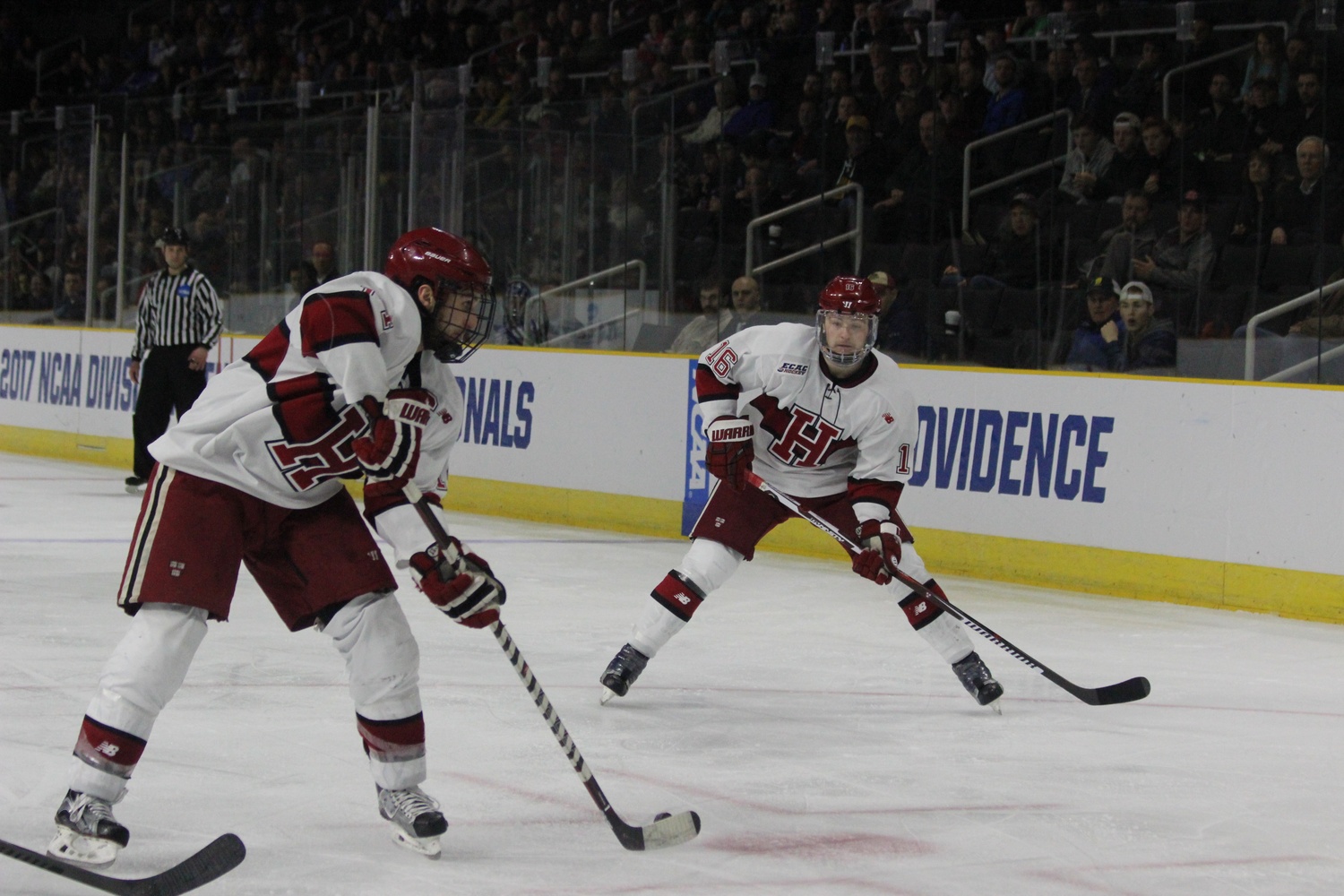 In a solo act of wizardry 7:47 into the middle frame, Donato flew into the attacking zone, slid the puck underneath the stick of Falcons' blue-liner Phil Boje, and deked out goaltender Shane Starrett before slipping the puck past his right pad.

Then on its first true power play of the game—a designation that ignores the Crimson's 19 seconds of man advantage time in the first period—Harvard's fourth-ranked man-up got the best of the nation’s top penalty-killing unit. Together, freshman defenseman Adam Fox and Kerfoot fired a pair of zig-zagging passes through the attacking zone until the puck reached Moy inside the left faceoff circle, where the senior right-winger notched his 100th career point at 9:50 by knocking in his third goal of the weekend.

“We took their best punch in the second period,” Air Force coach Frank Serratore said. “3-0 against a team like that, it’s not looking good. But all year long, we’ve persevered.”

Sure enough, a tripping penalty called against the Crimson's Michael Floodstrand about a minute after Moy’s goal enabled Air Force to persevere, providing the Falcons an opportunity to feast on their fourth-line prey.

Skating 6-on-5 on the trip-induced delayed penalty—one that prompted the ever-passionate Harvard band to direct an ill-advised “Where’s your goalie?” chant at the swarming Falcons—senior A.J. Reid delivered a blast from the center point that bounced off the back boards in the direction of Madsen’s right post. There, freshman fourth-liner Brady Tomlak knocked in the loose puck before Madsen even had a chance to react.

But that was just the beginning. Unlike in the National Hockey League, goals scored off delayed penalties do not negate prospective power plays at the collegiate level. That allowed Air Force to net two goals for the price of one. 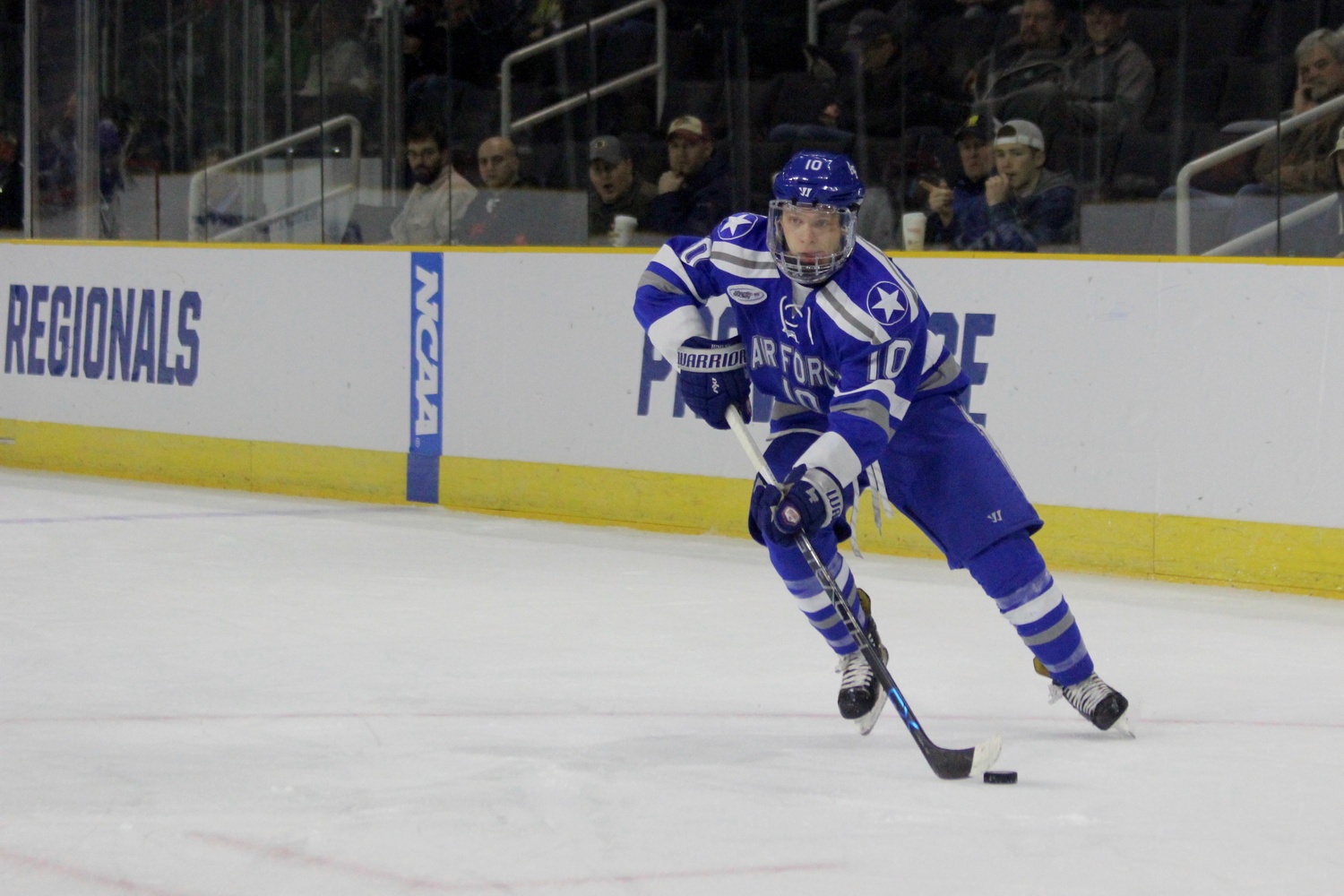 Just 15 seconds into the ensuing man advantage, Boje ripped a shot on goal from above the slot that Madsen, screened by freshman defenseman John Marino and the Falcons' Evan Giesler, struggled to see. The shot eluded the netminder’s glove, producing a juicy rebound for Air Force’s leading scorer, Jordan Himley, who did not miss his opportunity to make it 3-2.

“We knew we were never out of it,” Falcons' junior captain Dylan Abood said. “We never stopped believing and obviously that rejuvenated our bench and set the tone for the rest of the game. [It] got Harvard on their heels and gave us life.”

Yet with 3,708 spectators looking on, Madsen would not fall victim to any more bounces. The junior finished with 68 saves over the weekend, capping off his MOP-winning performance with a game-preserving left-pad stop on Matt Serratore, who earned a back-door chance by the post with just 12 seconds remaining. Marino then methodically shipped the puck beyond his own blue line to solidify the result.

“The sentiment in the locker room was ‘Enjoy this,’” Tringale said. “This is good. But we’re not done yet.”