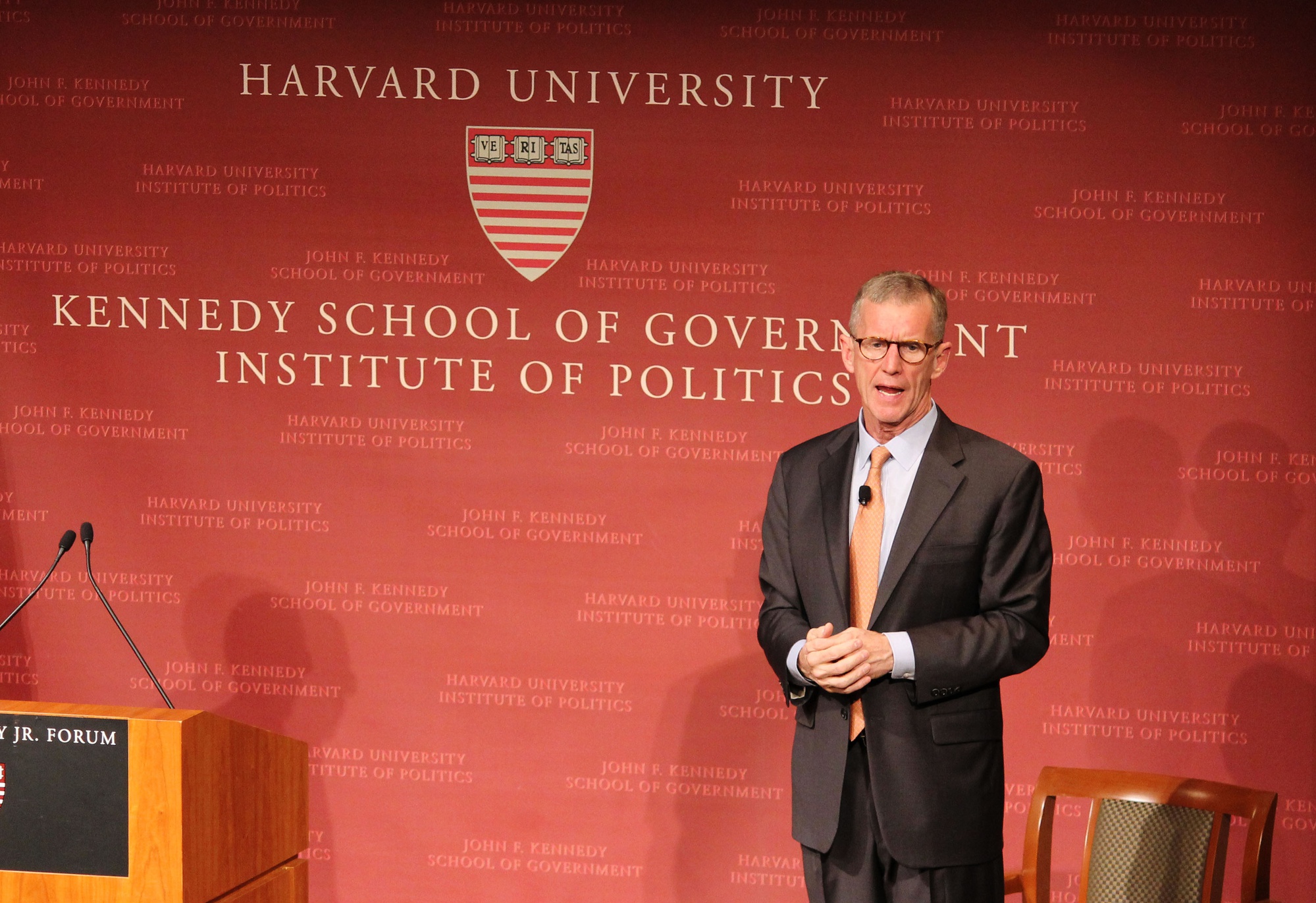 Retired Four Star Army General Stanley A. McChrystal speaks about citizenship at the Institute of Politics JFK Forum Wednesday night. He spoke of the importance of civil service and fielded questions from the Harvard community.
By Lucas Ward, Crimson Staff Writer 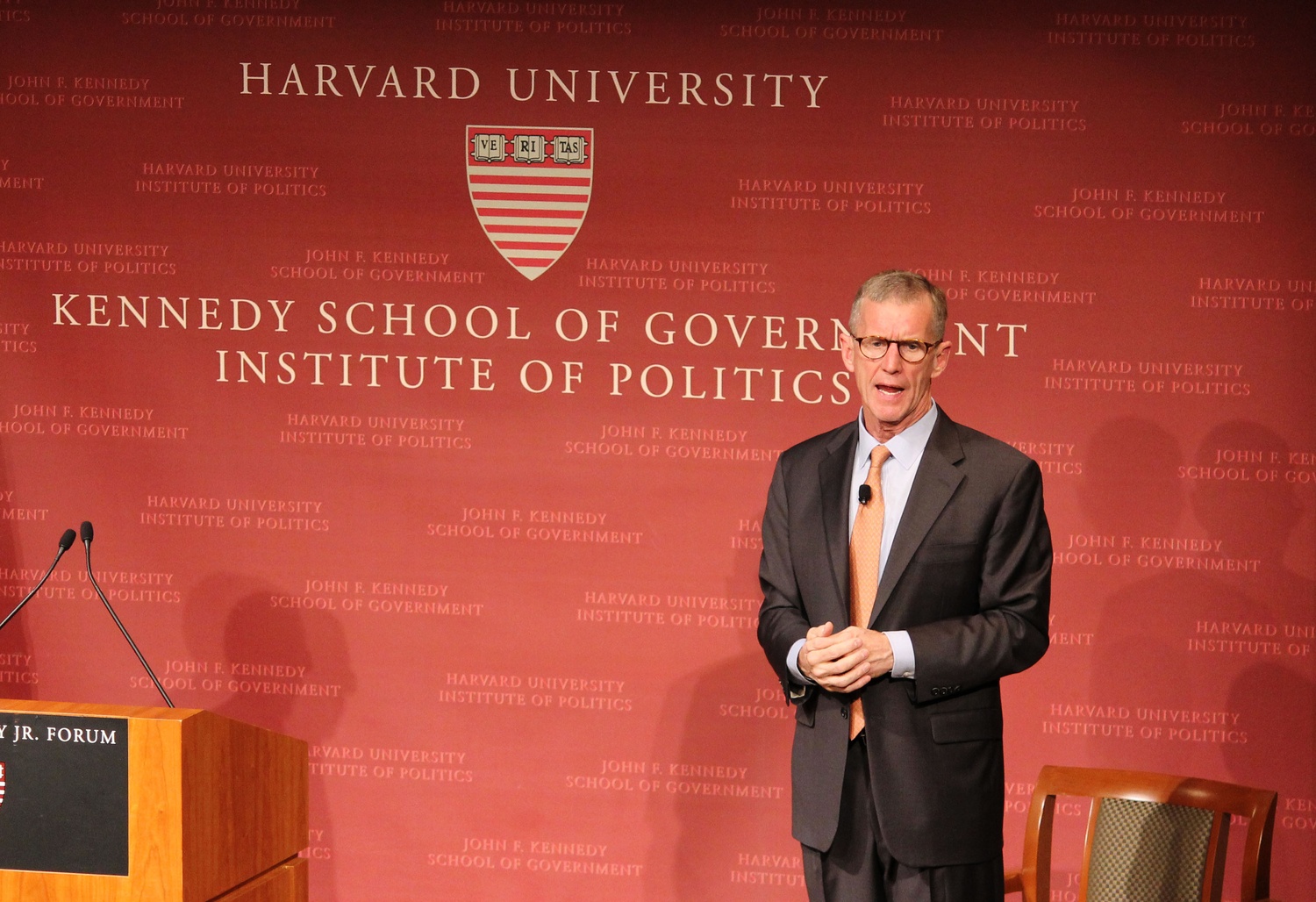 Retired Four Star Army General Stanley A. McChrystal speaks about citizenship at the Institute of Politics JFK Forum Wednesday night. He spoke of the importance of civil service and fielded questions from the Harvard community. By Kathryn S. Kuhar

Retired four-star General Stanley A. McChrystal called for a mandatory national service program for young people and argued that American citizenship should require more responsibility at an Institute of Politics event Tuesday afternoon.

McChrystal—who graduated from United States Military Academy before joining the 82nd Airborne Division—served as the Commander of the Joint Special Operations Command, and of U.S. Forces in Afghanistan, among other national security posts. During the hour-long event, McChrystal delivered a speech and answered questions from the audience.

For much of his speech, McChrystal explored the responsibilities of American citizenship in the 21st century.

“Like many, I would argue that the concept of citizenship in our country has shrunk from a broad concept of inalienable responsibilities to each other, into a portfolio of rights we often consider an inheritance we can possess and enjoy with little required of us in return,” McChrystal said.

McChrystal said that Americans should consider what more they could do to serve the United States as citizens.

“I believe that citizenship is more than voting, or even protesting, we have a right to be ourselves but I despair if that right implies the right to be selfish, or even the right to be mediocre,” he said. “There is something we can do, and that is rebuild a culture of service.”

McChrystal offered one potential solution: creating a national service program that allows young people to serve the country and develop themselves. He suggested every American be asked to do a year of a paid service program, emphasizing the necessity of creating service opportunities aside from military service. A properly rigorous program, he argued, would instill 18-to-28-year-olds with a sense of civic duty as well as provide an opportunity for them to develop professional skills.

McChrystal drew on historical examples to illustrate his ideal for national citizenship.

He contrasted the fable of the warrior Ben Hur, who must row a battleship beneath decks, with the example of an Athenian war ship. He said that while Athenians chose to serve the country, the Romans portrayed in Ben Hur were forced to.

“But there are no slaves on the oars, only free Athenians,” McChrystal said. “Citizens. Performing a duty that is as esteemed in society as it was dirty and dangerous.”

“Consider the alternative: a society in which our already daunting divisions widen, our retreat from responsibility accelerates, and our expectations of citizenship shrink even further,” he said. “The vision is one of a nation in undeniable decline, a march towards twilight, away from the dreams of our founders.”

He quoted 18th century English historian Edward Gibbon’s Decline and Fall of the Roman Empire, “when the freedom they wished for most was freedom from responsibility, then Athens ceased to be free and was never free again. It’s time to choose.”

Even as he predicted the rise and fall of nations, McChrystal also took the opportunity to offer more concrete advice to students. He advised them to follow a rigorous written schedule.

“Well I think one of the things you can do is set yourself a schedule. You could call it an operating rhythm, in combat it’s called a battle rhythm, and it’s figuring out those things you have to do,” he said. “It can be as mundane as laundry, or physical exercise, or study; or it can be also things you want to do, reaching out to friends so you don’t forget it. People say well that’s really sort of ridiculously detail-oriented to put that together but if you write it down I’ve found it’s a good forcing function to make me do things that otherwise I just never get around to.”