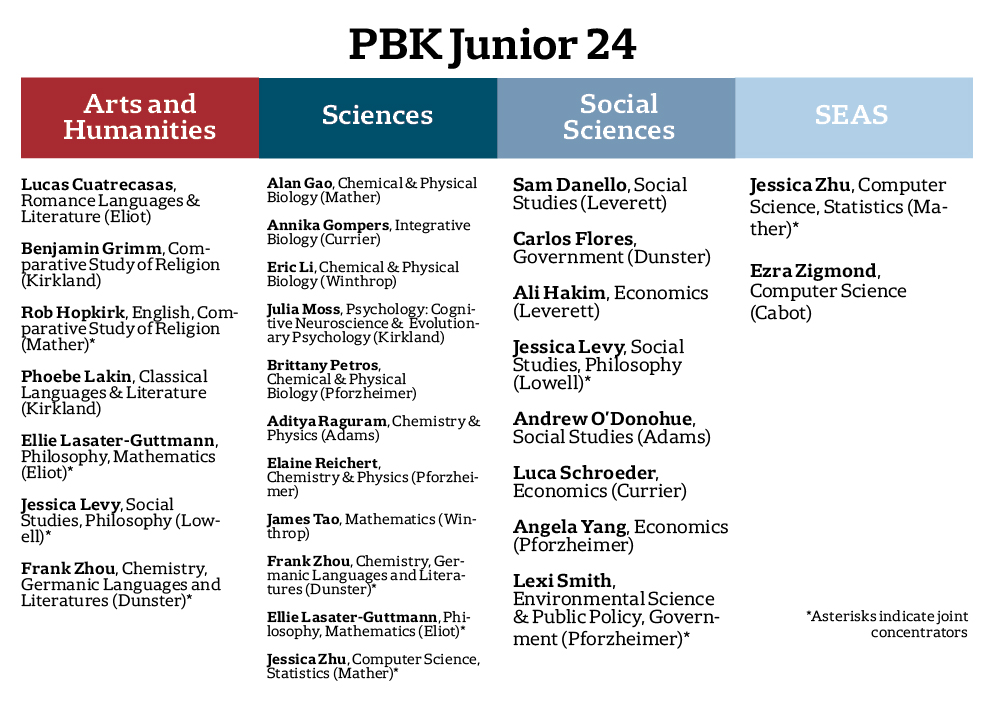 When Andrew J. O’Donohue ’18 glanced at his phone moments before leaving for Yardfest, he expected anything but to receive an email notifying him that he had been selected to join Harvard’s chapter of Phi Beta Kappa, the country’s oldest academic honor society.

“It was a really incongruous time to be commended for scholarly achievement and diligence," O’Donohue, who studies Social Studies, said. “I was incredibly shocked and excited.”

O’Donahue joins 23 other juniors who received the award, which honors students who have not only succeeded academically but who have displayed intellectual integrity, openness to other views, and a number of intellectual interests, according to Phi Beta Kappa’s website.

“I’m grateful that selection wasn’t dependent on our GPA exclusively,” Ellie M. Lasater-Guttmann ’18 said. “It seems that they really value breadth and depth of courses, which is something that’s really important to me.”

This year’s “Junior 24” study fifteen different concentrations ranging from Computer Science to Romance Languages and Literatures. Economics, Social Studies, and Chemical and Physical Biology each posted three honorees, together comprising over a third of the honorees.

Pforzheimer House saw the most juniors named to the honor society, with four students receiving the award. Quincy House was the only House not represented in this year’s Junior 24.

Lasater-Guttmann, who recently switched her concentration to Philosophy, said her acceptance to Phi Beta Kappa is a testament to how the University values a wide range of academic pursuits.

“I think this shows the fact that Harvard really does value interdisciplinary work,” she said.

Other honorees said they see the accomplishment as a result of the supportive advising they have experienced throughout their time at Harvard.

“I am really grateful to everyone who made this possible, especially my advisors, parents and friends,” Annika Gompers ’18, an Integrative Biology concentrator, said.

Rob J. Hopkirk ’18, an English concentrator, said he wasn’t expecting the honor—he was procrastinating on a final paper when the email came in.

“I’ve been thinking ‘why me?’ Everyone at Harvard is so smart and driven, so ‘I’ve just been thinking what have I done?” he said. “I am thankful I was able to pursue my passion and someone noticed.”

“The first thing I did after I got the email was to call my parents and thank them,” Hopkirk added.

The Junior 24 will be formally inducted at a ceremony on May 1. Here is the full list:

A previous version of this story omitted one of the new members of Phi Beta Kappa. It also misstated the the House in which Julia E. Moss '18 lives.