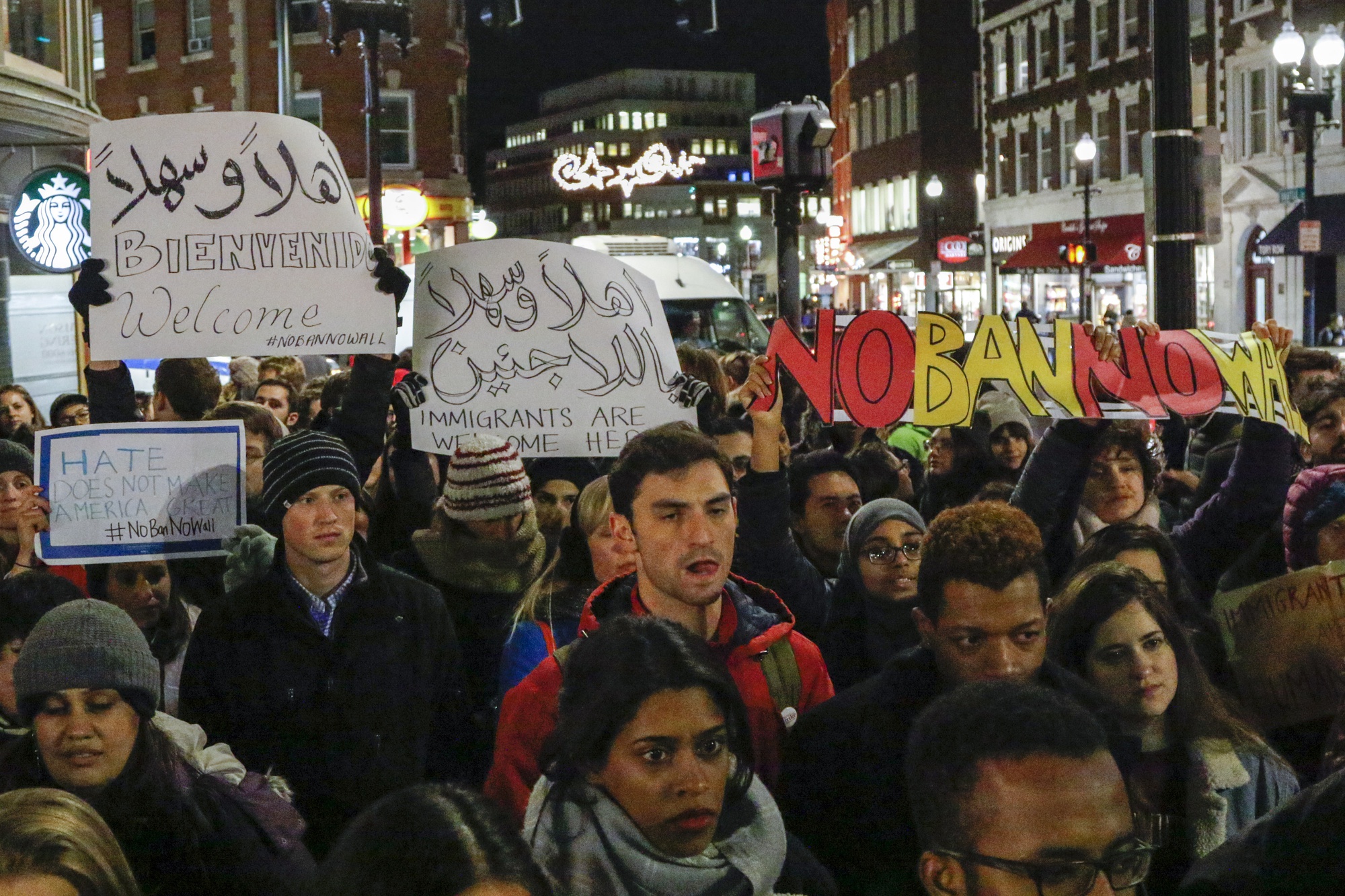 With Trump's immigration orders on hold, some international students say the "fear and anxiety" hasn't abated.
By Claire E. Parker and Phelan Yu

It was 4:42 p.m. on a Friday afternoon, and University offices were closing down for the week.

But hundreds of miles away at the White House, with a flourish of his pen, President Donald Trump signed an executive order that would reverberate through Harvard’s campus and generate chaos across the world.

Executive Order 13769, signed Jan. 27, banned foreign nationals from seven predominantly Muslim countries—Iran, Iraq, Libya, Somalia, Syria, Sudan, and Yemen—from entering the United States for 90 days, stopped admission of refugees for 120 days, and blocked all Syrian refugees from entering the country indefinitely. Hundreds of people were stranded in airports, families were separated, and flights halted before they took off.

In Cambridge, residents and Harvard affiliates spoke out loudly against the ban. Demonstrators at a Kennedy School emergency protest called the order “horrible news,” others went to Boston Logan Airport to demand that officials release immigrants from the affected countries, and University President Drew G. Faust herself penned a letter opposing the move. 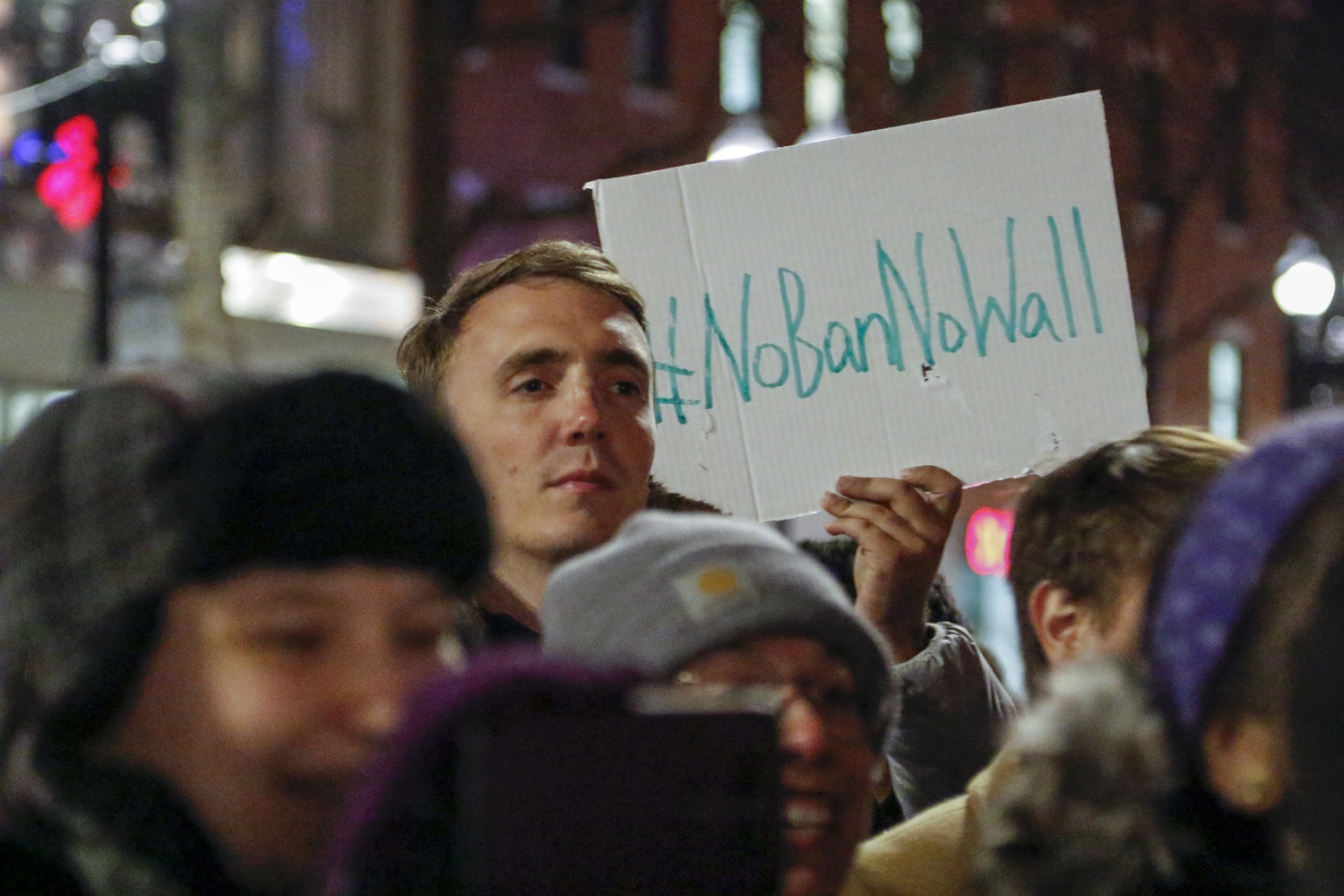 Meanwhile, behind closed doors across the University and in Washington, resistance had begun days earlier. Administrators saw a copy of the draft executive order two days before Trump signed it, and each evening before its signing, staff in several Harvard offices phoned Washington, D.C. to respond to a situation Faust called “very unstable and uncertain.”

More than 100 Harvard affiliates hail from the seven affected countries. At least four of these affiliates were barred from entering the United States in January.

“There was incredible anxiety on campus, and not wrongly placed anxiety,” said Suzanne Day, Harvard’s Director of Federal Relations.

While temporary injunctions have suspended that first travel ban and the revised version that followed it, international students’ fears about their ability to travel freely and remain in the United States still linger.

Offices across Harvard have poured additional resources into supporting students with foreign passports, yet some maintain that the University should do more. And as the Trump administration and its controversial immigration platform tread on, anxiety only continues to mount.

'All Hands on Deck'

During his presidential campaign, Trump called for a “total and complete shutdown” of Muslims entering the United States—a context that fueled immediate court challenges to the travel ban.

Harvard filed multiple amicus briefs in these challenges, and the Law School’s Immigration and Refugee Law Clinic also filed briefs prepared by their staff and students.

For Harvard affiliates affected by the ban, the Harvard International Office’s Immigration Services Director Maureen Martin and attorney Jason M. Corral—who works in the Immigration and Refugee Law Clinic—answered questions at a series of town hall meetings the week after Trump signed his order. 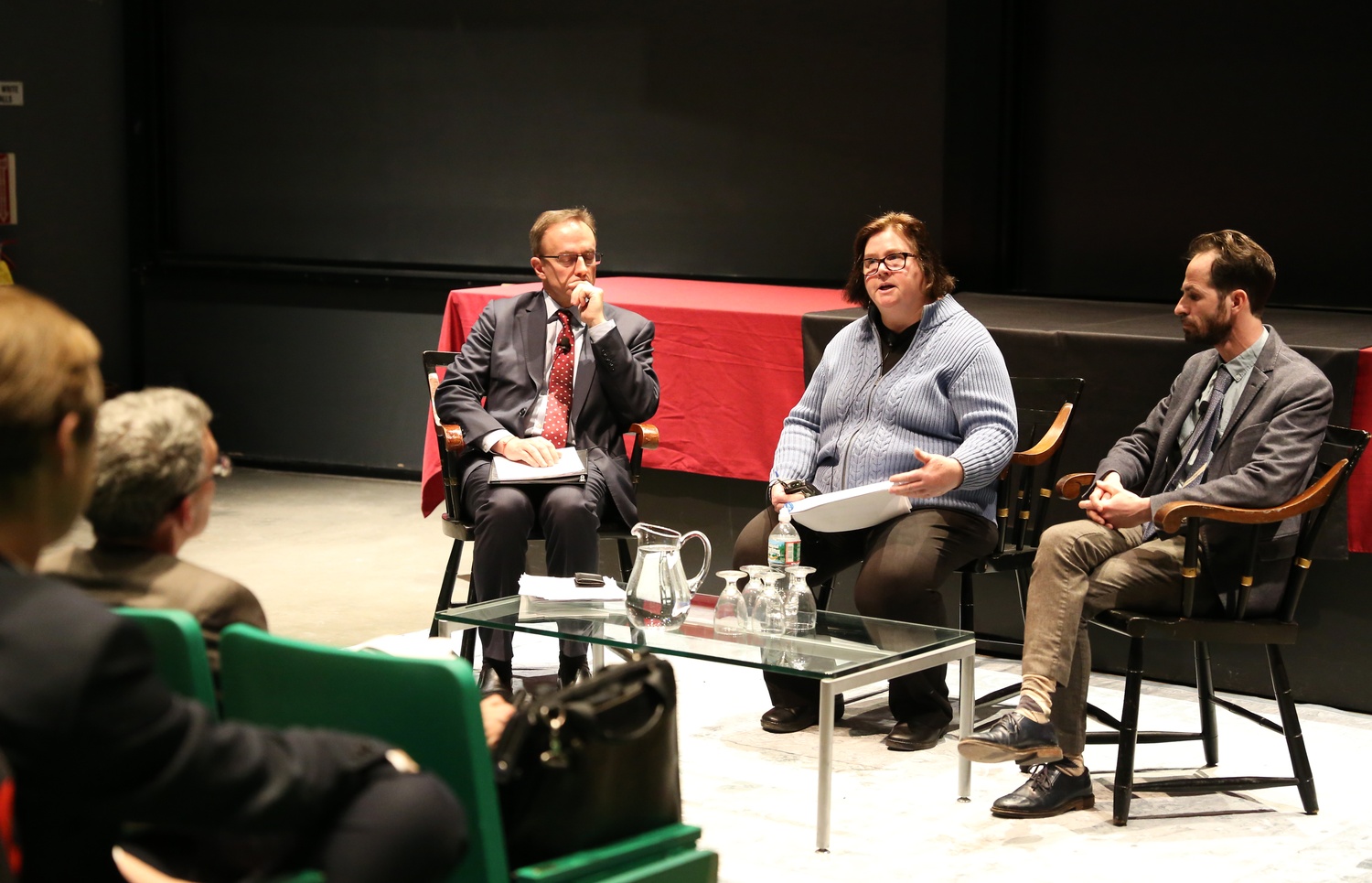 Affiliates at the town halls asked personal questions about their futures in the United States. A postdoctoral fellow asked about the fate of her visa, set to expire four weeks after the event. Another graduate student said he was concerned about the prospects of gaining refugee status, adding he feared facing religious persecution upon return to his home country of Iran.

More than a thousand Harvard affiliates attended the town halls while Harvard’s federal relations team fielded administrators’ own concerns from their office in Washington, D.C.

“We were sort of all hands on deck to try and… provide answers and support,” Day said.

Amid legal challenges, the White House released a modified executive order on March 6, which removed Iraq from the list of banned countries and exempted valid green card and visa holders.

Appeals court judges heard oral arguments on injunctions to the second order in the first weeks of May, and it is expected that legal debate on the executive order will eventually reach the Supreme Court.

At the center of Harvard’s response to the executive order stands the International Office, tasked with ensuring that the University’s foreign affiliates can remain safely on U.S. soil.

The office first opened its doors in 1944 to serve Harvard’s international students, who numbered around 250 at the time. Now, 9,851 international affiliates study or work at Harvard, according to the HIO website. Roughly 4,900 of them are students.

Upon their arrival in Cambridge, international students are assigned a designated staff member by the HIO. This staffer acts as a liaison between the student and government agencies that handle visas and immigration. Harvard temporarily hired an additional staff liaison shortly after the travel ban was issued. 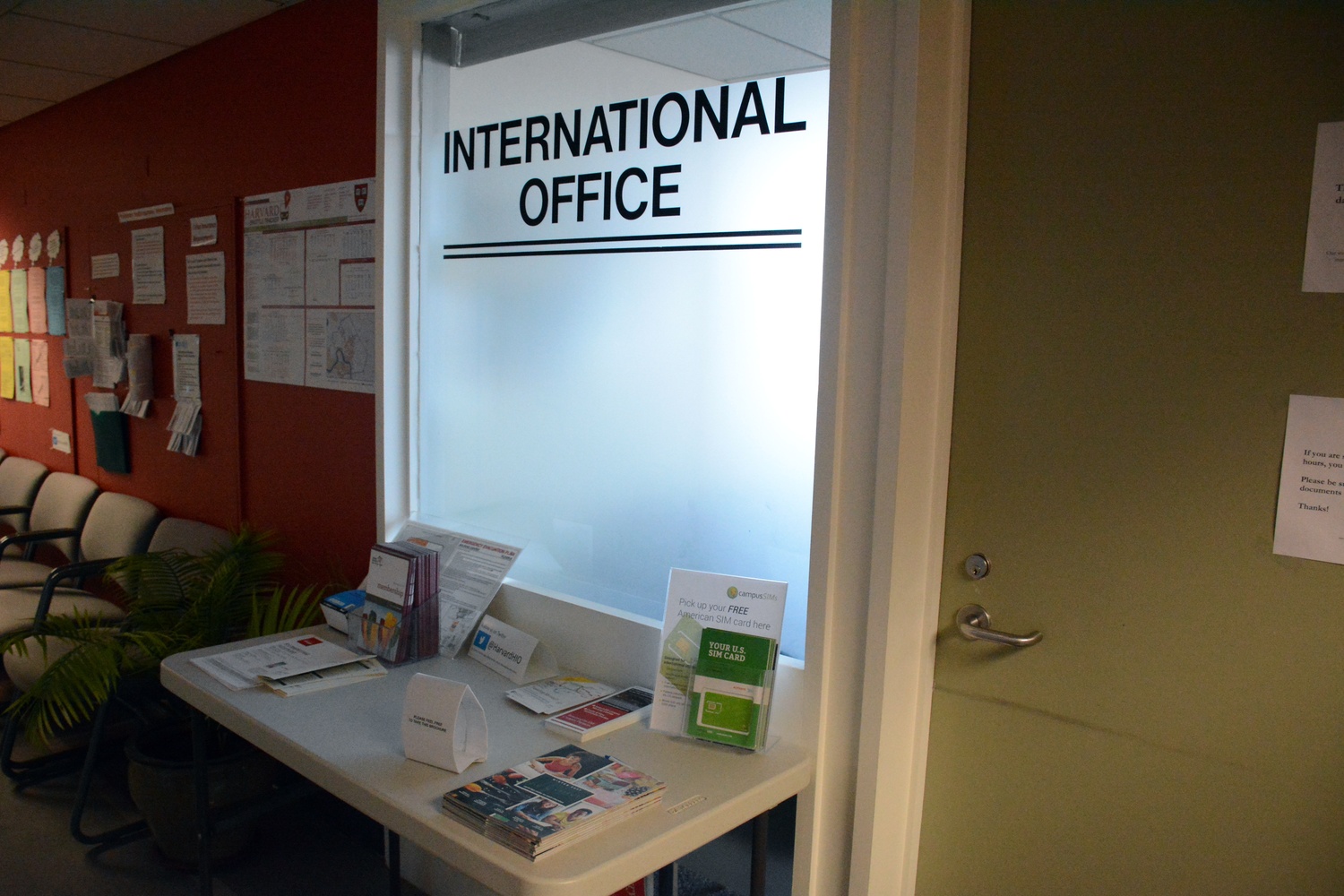 The Harvard International Office opened its doors in 1944 to serve Harvard's international students, who numbered around 250 at the time. By Jacqueline S. Chea

Martin said this addition has made the office more efficient.

“The way that we’ve incorporated that position into our office is allowing our average client load to be reduced by about 20 percent, so this has had an immediate impact,” she said.

But even with the extra staff member—coupled with the town halls, community messages, and amicus briefs—some felt that the University was not doing enough. In February, more than 600 Harvard affiliates signed a petition members of the graduate student unionization effort later presented to Faust, calling on the University to take a series of steps to further support international students and scholars.

The petition argues that these affiliates “require much greater and more concrete legal, political and institutional support from the administration...in the face of ongoing and anticipated attacks.”

The International Office has since created a 24-hour hotline Harvard affiliates can call if they find themselves stranded abroad or facing legal trouble—fulfilling one of the petition’s requests—and the HIO website now features a section on “Immigration Updates and Resources” with updates on changes to federal immigration policy and procedures.

But beyond the petition, some are confused about where international affiliates facing legal trouble should turn. While the HIO can offer advice through appointments, walk-in hours, and its hotline, it does not provide legal counsel or representation to students who may find themselves stranded abroad or caught in deportation proceedings.

Graduate student Niharika N. Singh said while she found both the HIO and Immigration and Refugee Clinic to be “great resources” for international students, the scope of their legal capability is unclear.

“There needs to be much more clarity on the types of issues these organizations are able to handle,” Singh wrote in an email.

Administrators referred students with legal questions to the Immigration and Refugee Law Clinic, and Corral handed out business cards at town halls. But the University hired Corral in January for a different purpose: providing legal counsel to students with undocumented immigration status.

“My understanding [was] that the primary focus of my job was to represent and assist undocumented students but… there needs to be some flexibility to respond to the issues that the Harvard immigrant community faces,” Corral wrote in an email.

Corral wrote that he has met with students with concerns on the travel bans throughout the semester, and is representing students in several types of cases before U.S. Citizenship and Immigration Services.

The Office of the General Counsel—Harvard’s official legal arm—also created a list of firms willing to represent Harvard affiliates in court if necessary, according to Martin.

“As far as I know, anyone who had a question or concern was able to speak to someone,” Martin said.

But when asked if the Office of the General Counsel itself would ever intervene in a case involving a Harvard affiliate impacted by changes to visa policies or travel bans in the future, Harvard General Counsel Robert W. Iuliano said he could not make any promises.

“I can’t answer a hypothetical—I’d have to be presented with a concrete situation and make a judgment about what the appropriate response might be,” Iuliano said.

A Climate of Uncertainty

After court rulings, the immediate threat of getting stuck abroad has abated. But a sense of unease lingers among international students and scholars, who are left wondering what Trump might do next.

“That initial weekend, January 27, when bedlam was apparent throughout the U.S.—I don’t think people have fully recovered from that,” Martin said. “I think in some ways, the damage was done, because there’s still fear and anxiety around traveling.”

During his campaign, Trump repeatedly called for changes to U.S. visa and immigration policy, including potentially ending visa programs used by foreign students and scholars.

Nava Gharaei, a biology graduate student from Iran, wrote in an email that she and her husband did not want to leave the country for conferences or field studies for fear that they might not be readmitted.

“It is not easy to study or work when you are constantly worried that you might get deported or discriminated against due to your nationality and origins,” Gharaei wrote. 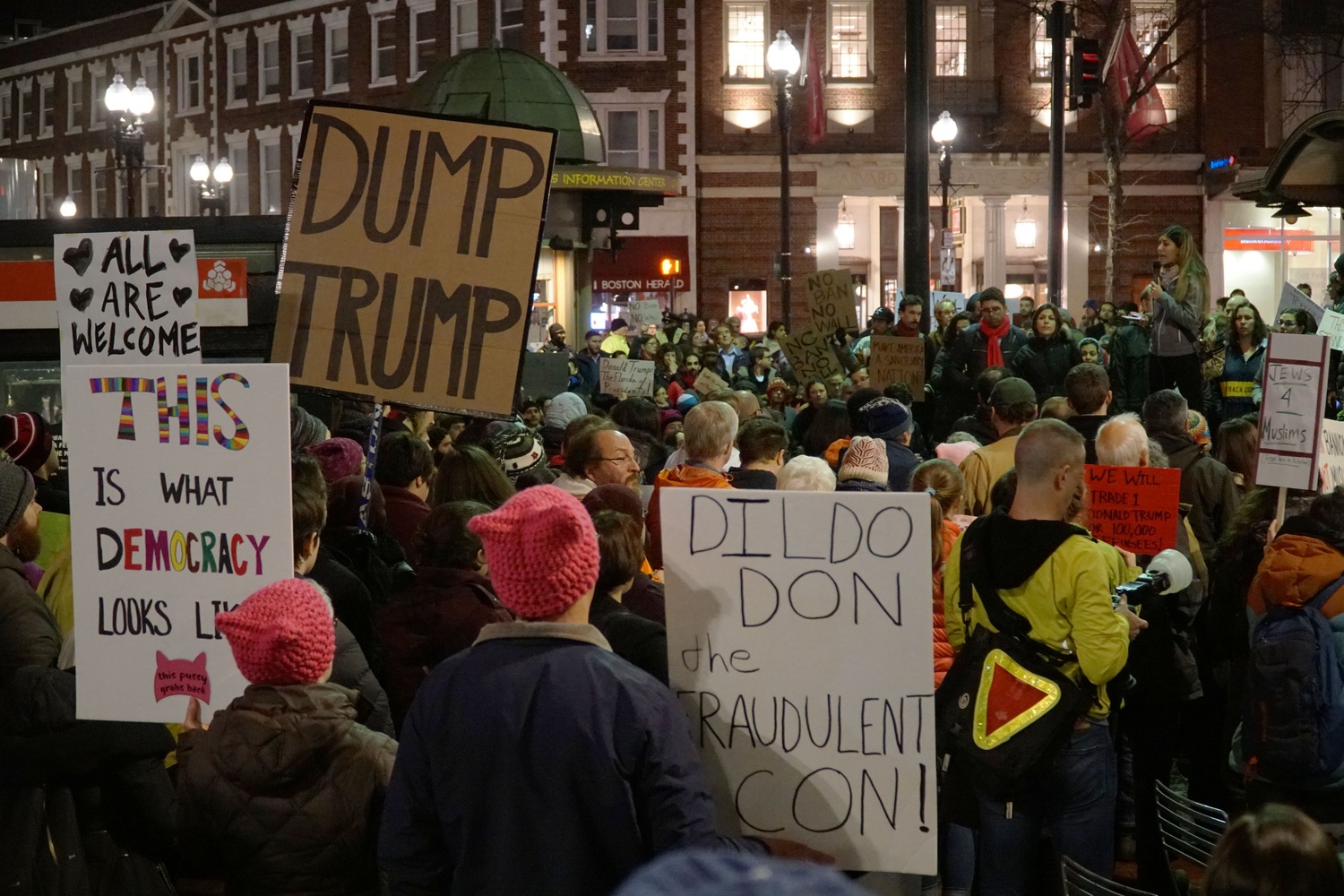 Juhwan Seo ’17, a Korean citizen at Harvard on a student visa, lived in the United States throughout his childhood, and hopes to get temporary protected status after graduation to stay in the country. But the Trump administration’s volatility leaves Seo’s post-graduate prospects up in the air.

“Even months after graduation, we might be interacting with a whole new set of rules for immigration,” Seo said. “I am now in a much more vulnerable place.”

Deborah E. Anker of the Immigration and Refugee Law Clinic said she still cautions international clients about traveling abroad. Anticipating travel difficulties over the summer, the College reserved beds for students who felt they could not safely travel home. And on Commencement Day, Harvard will record live video streams of the event for international families unable to make the trip to Cambridge.

Vice Provost for International Affairs Mark C. Elliott and Martin also met with customs and border officials at Logan Airport several weeks ago ago to tour the facilities and ask questions about their procedures, in case Harvard affiliates are detained there in the future.

Other administrators say they are concerned that a message sent by the travel bans may deter international students and scholars from choosing to come to the United States in the first place.

“We face a very real risk that students and scholars from all corners of the globe may no longer see Harvard and other U.S. universities as attractive places to pursue their studies,” Faust told faculty members in March, shortly after Trump signed the second travel ban.

Samira Asgari, an Iranian post-doctoral fellow who was among the four Harvard affiliates barred from the United States in January, said she may not remain here after her current visa expires in two years. She added that the unpredictability caused by the travel ban has added pressure to her life.

“I don’t think I could do this all the time,” Asgari said, “Boston, the Brigham [and Women’s Hospital] are awesome, but there are many other great places around the world for research.”

But Elliott said the anticipated drop in international enrollment has not materialized. Numbers of international students who will matriculate this fall remain steady, he said.

“I truly hope that nothing changes,” Elliott said. “I can’t emphasize enough how crucial the presence of international students and scholars on campus is to what Harvard really is...We really strongly depend on a talent pool that is the whole world.”