With many cyclists come congested streets and, some residents say, an unsafe and accident-prone environment.
By Madeleine R. Nakada and Michael J. Won 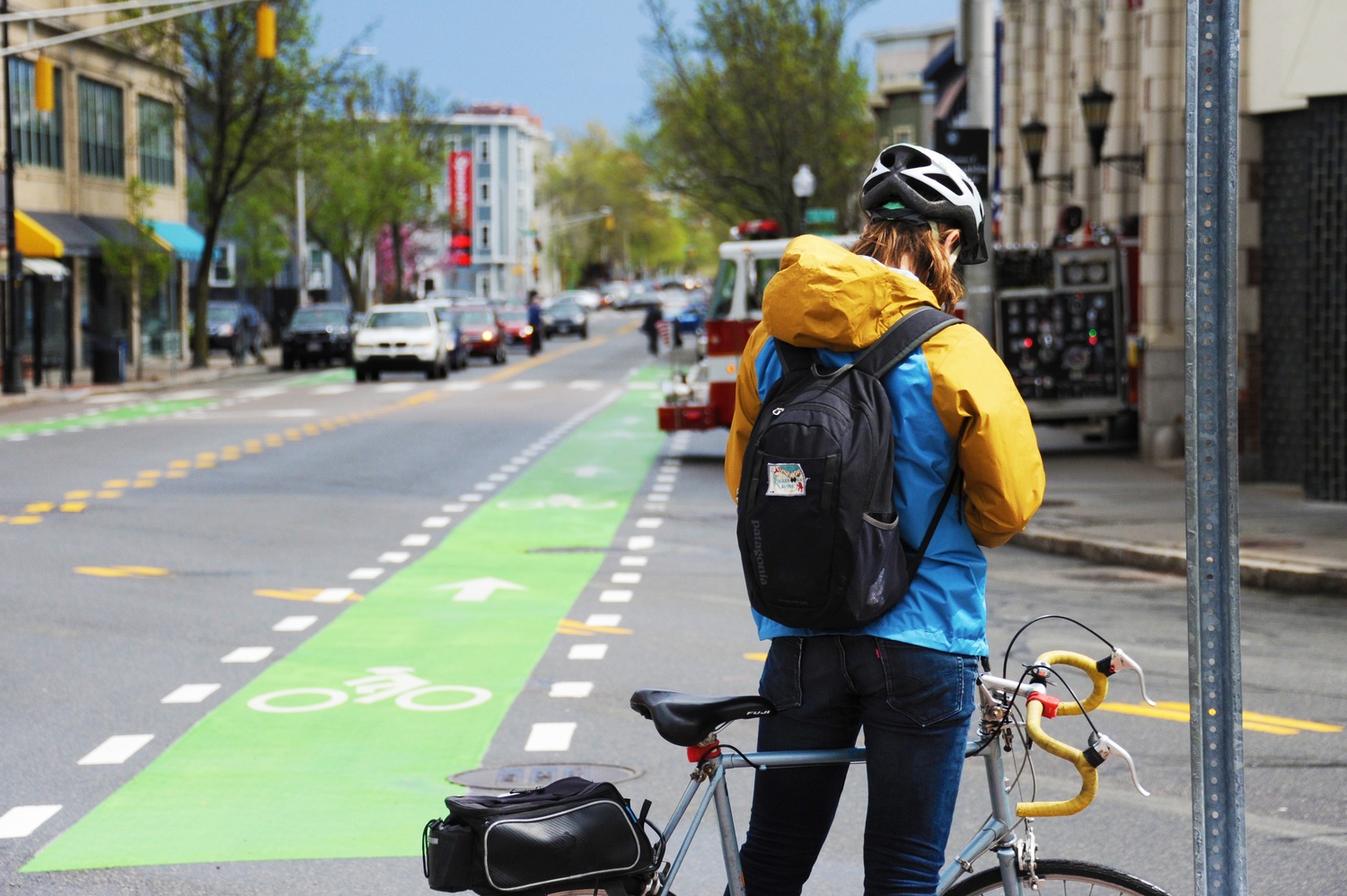 A bicyclist stands at the intersection of Cambridge St and Hampshire St, in Inman Square. By Derek G. Xiao

On June 23, 2016, Amanda N. Phillips '10—a 27-year-old Cambridge resident and nursing student—was struck by the door of a Jeep and killed by a passing truck while biking in Inman Square. Four months later, Bernard “Joe” Lavins, a 60-year-old researcher, collided with a tractor trailer and died in a bicycle accident less than two miles away in Porter Square.

To some Cantabrigians, the two fatal crashes illustrated tragic shortcomings in the bicycle infrastructure of a city often heralded as one of the most bike-friendly in the country. With many cyclists come congested streets and, some residents say, an unsafe and accident-prone environment.

Cambridge has not sat idly by on bike safety: Both Phillips and Lavins died as Cambridge was years into a citywide plan to create a network of safer bike arteries and prevent fatal incidents in the future.

While Cambridge’s existing plans to promote safe ridership around the city have a clear and concrete vision and set of goals, to some residents, the implementation of bike safety measures has been largely ineffective. Citing accidents in the past, residents characterize these reforms as too small in scope to seriously improve the safety of Cambridge’s many cyclists.

In October 2015, local government officials released Cambridge’s Bicycle Plan, which aims to make “all streets bicycle friendly” and sets targets for increased bike ridership—by 2030, it reads, 20 percent of all trips in Cambridge will be made by bicycle. Coupled with Cambridge’s Five Year Street and Sidewalk Reconstruction Plan, which allocates funds to reconstruct streets and sidewalks needing renovation, the Bicycle Plan broadly looks to improve the way cars, bicycles, and pedestrians share the road.

In March 2016, moreover, the City Council unanimously committed to “Vision Zero,” formally setting a goal of eliminating all serious bicycle collisions in Cambridge.

This commitment to safety has been a major consideration in Cambridge’s charge to redesign existing bike lanes. Although easy to enact in cities like Cambridge, painted bike lanes do little to mitigate dangers that cyclists face. According to research from the Harvard School of Public Health, traditional bike lanes force bikers to ride in close proximity to parked cars, which increases the risk of injury or death. 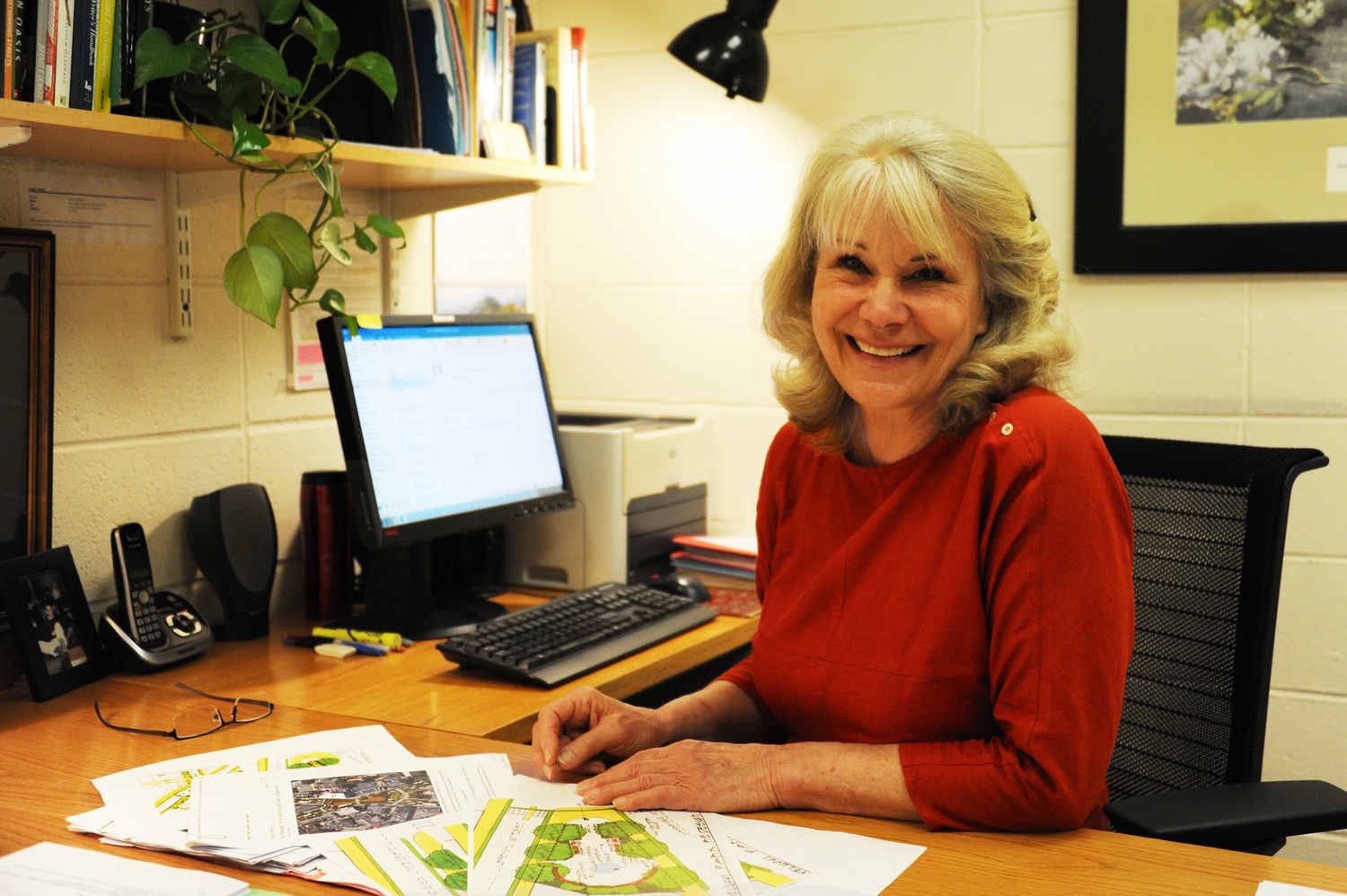 Anne Lusk, a bicycle researcher at the School of Public Health, has proposed what she believes is a safer intersection design for the accident-prone Inman Square in Cambridge. By Derek G. Xiao

“On the road side of parallel parked cars, you run the risk of being doored or being killed,” said Anne Lusk, who conducted research on the lanes. “It’s a double Russian Roulette because a door opens, and you run into it or you swerve around it. And oncoming traffic could kill you.”

Cambridge is currently working to install protected bike lanes, an alternative to painted lanes with flexible posts marking a buffer zone between the bike lane and the street. In addition to alerting drivers to stay out of the buffer zone, the posts also prevent vehicles from using the bike lane to double park or drop off passengers. 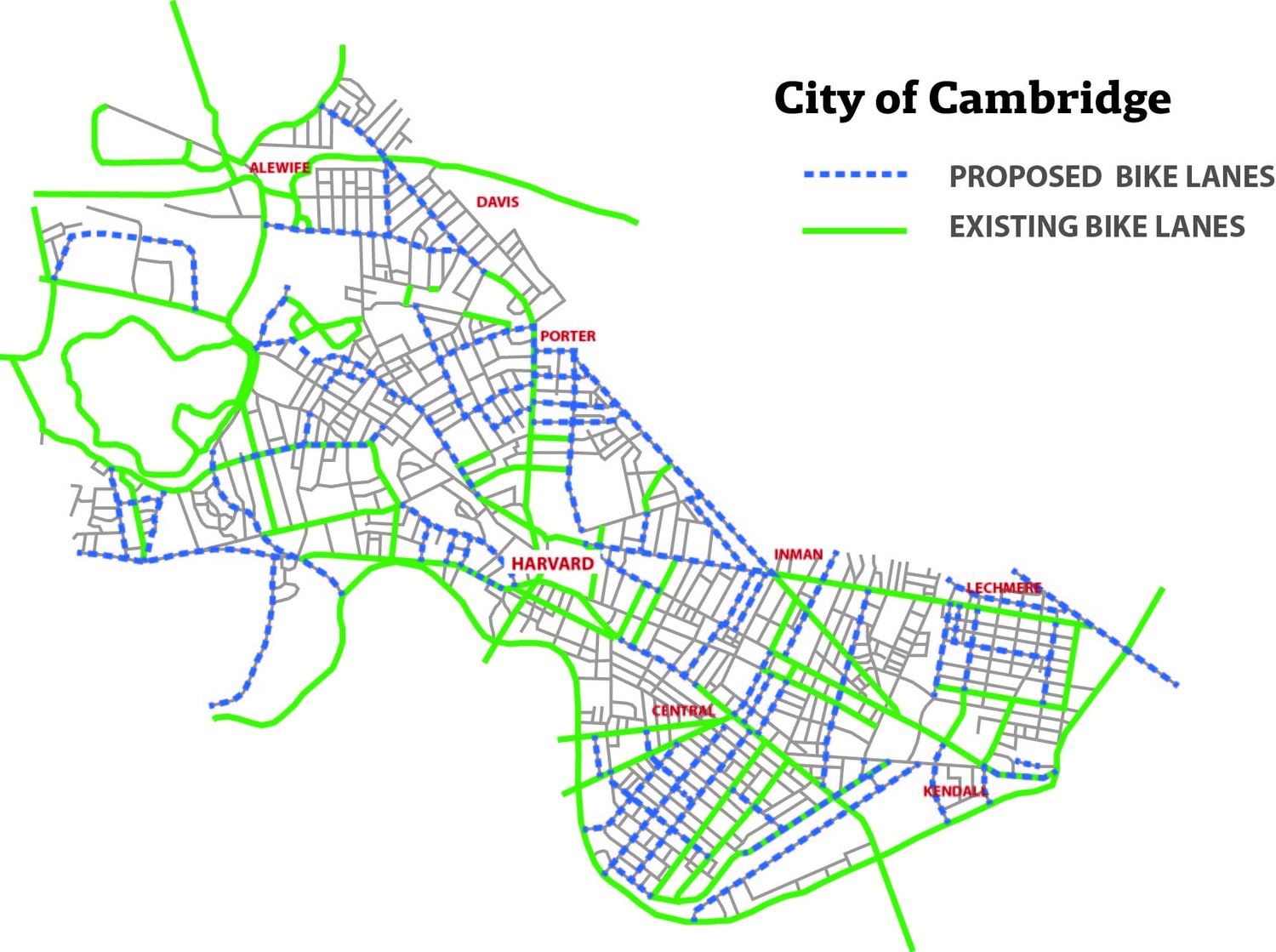 So far, Cambridge has implemented two demonstrations testing the installation process and overall effectiveness of the new bike lanes. Both testing zones are one-block corridors on Massachusetts Avenue, with one between Sidney and Douglass Streets in Central Square, and the other near the Law School between Waterhouse and Everett Streets. They were installed in late 2016.

While the new lanes only cover about two blocks of city streets, the Bicycle Plan looks to have a comprehensive network of safe lanes in the future.

While the protected bike lanes may seem like a step in the right direction, some Cantabrigians say the drawbacks of the lanes have outweighed their benefits.

For one, some residents criticized a loss of automobile parking space that came with the new lanes. Because the protected lanes need space for a buffer between cyclists and drivers, the city removed some previous parking spaces along one-block stretch of lanes.

Herb Taylor, a reverend at the Harvard-Epworth United Methodist Church—located along the new bike lanes on Mass. Ave—said parking space removal has been detrimental to the those that frequently visit the church. Taylor said that in addition to his own parishioners, three other religious groups, as well as multiple Alcoholics Anonymous and Narcotics Anonymous groups, use the church as a meeting space. 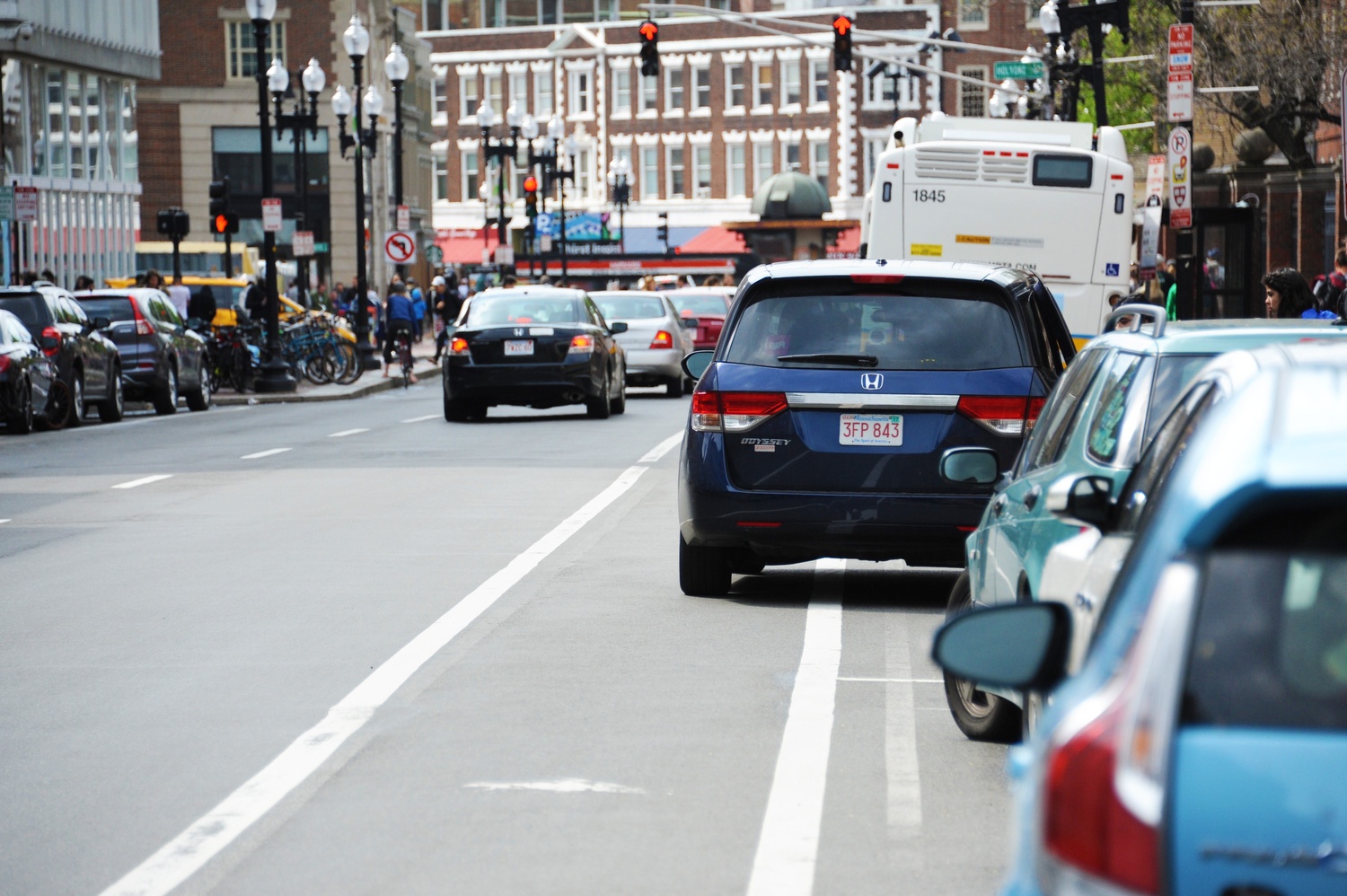 A car double-parked in the bicycle lane on Massachusetts Ave, near Harvard Square. By Derek G. Xiao

“It just appeared one day, and it was a surprise,” Taylor said of the new bike lane. “Parking has always been a challenge, and closing off those spots... increased the challenge significantly on Sunday mornings.”

Susanne Rasmussen, who directs transportation initiatives across Cambridge, said that losing parking spaces to bike lanes is a legitimate concern. However, she said, in previous street redesigns, Cambridge has been able to repurpose existing parking space to alleviate the strain on residents with cars.

In the past, new parking spaces have been freed up moving fire hydrants to street corners, limiting parking to residents in the evening, and adding metered parking during the day.

On the other side of the bike lanes debate, though, some residents have urged the city to implement protected paths on a larger scale, so that cyclists do not have to travel on roads without protected bike lanes to reach existing ones.

“So far, the city has been putting in a lot of disconnected cycle lanes and we really think it’s important to have a connected network,” Fillmore said. 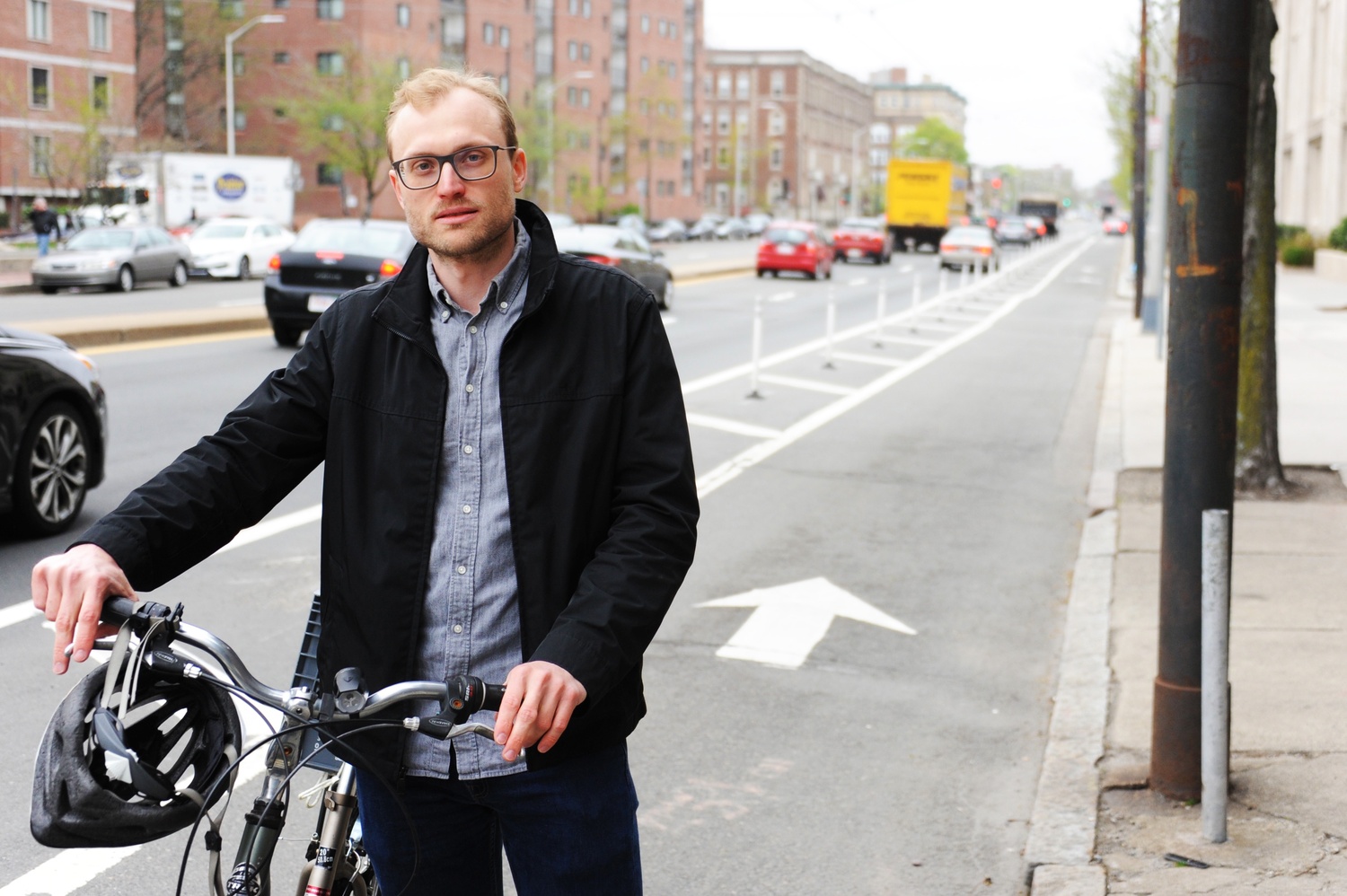 Nathanael Fillmore, a Cambridge-based bicycle activist, stands in front of a protected bike lane he advocated for on Massachusetts Ave. By Derek G. Xiao
Advertisement

Joseph E. Barr—Cambridge’s director of traffic, parking, and transportation—acknowledged these concerns, but said that the city’s pilot program looked to simply learn about better bike lane practices before implementing them on a larger scale.

“We sort of acknowledged up front that these weren’t creating a new network; these were just showing the possibilities and you know, giving people a taste of how this could work,” Barr said. “It may take a while before people really start to see the network connect exactly the way they want it to."

Following outcry from Cantabrigians like Fillmore, the municipal government plans to work to address residents’ concerns and install a large network of protected bike lanes.

Over the next year, for example, Cambridge will install a longer corridor of protected bike lanes on Cambridge Street. Two other segments will also be added on Mass. Ave. this spring.

The installation of the Cambridge Street lane, the first installation of protected lanes that will stretch for longer than one block, will give city planners a better sense of how quickly they will be able to install future corridors.

“Assuming all goes well with [the Cambridge Street installation], which at this point we’re getting pretty good feedback on it, then we can start to implement two or three of this type of corridor per year,” Barr said.

He added: “As much as we’re trying to move these things forward quickly, it won’t happen overnight.”

—Staff writer Michael J. Won can be reached at michael.won@thecrimson.com.