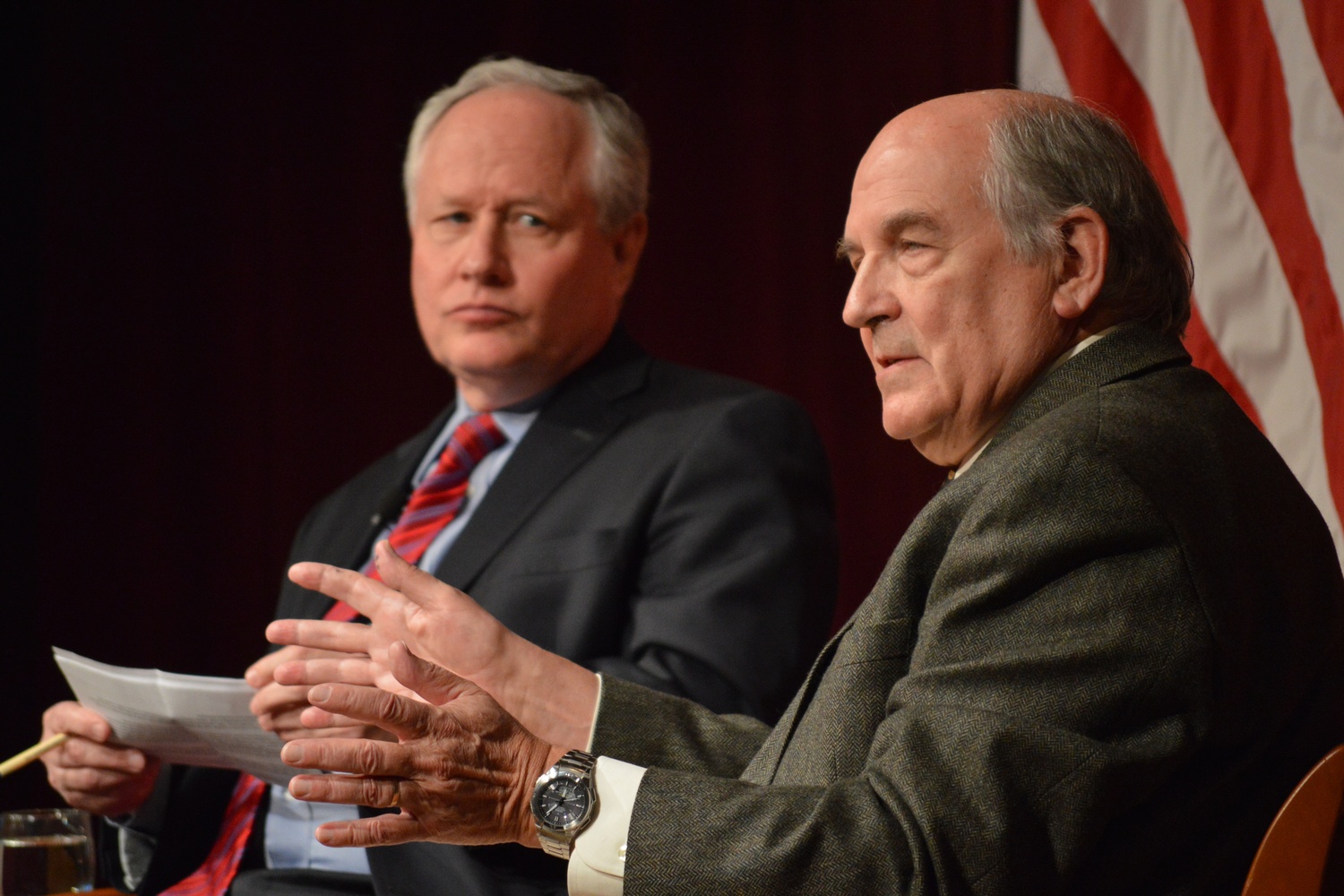 Charles A. Murray '65 speaks with moderator Bill Kristol '73 at the Institute of Politics in 2014. By Y. Kit Wu
By Brandon J. Dixon, Crimson Staff Writer

Charles A. Murray ’65, a political scientist whose appearance at Middlebury College earlier this year prompted violent protest, will speak at Harvard next week at an event hosted by an undergraduate group that seeks to test the College's commitment to free speech.

In his scholarship, Murray has argued that some racial groups have higher IQ levels than others, drawing widespread criticism from scholars and watchdog groups who have labeled him a “white supremacist” and “eugenicist.”

At Harvard, Murray will discuss his 2015 book “By the People: Rebuilding Liberty Without Permission” with the Open Campus Initiative, a student organization launched last year to “test” the commitment to free speech at elite universities like Harvard by inviting controversial speakers to campus. Jordan Peterson—a University of Toronto professor who believes gender nonconformity threatens free speech—spoke at a panel hosted by the group in the spring, prompting protests from Harvard students who dismissed Peterson’s beliefs as discriminatory.

Murray’s arrival on campus, just weeks after white supremacist groups rallied in Charlottesville in demonstrations that prompted violence and killed one woman, has raised concerns among students.

But Musa said she has since opened up to the event. She said she realized that “unless we sit down and have a conversation with people that are labeled white supremacist, we’re never going to get anywhere.”

Murray, who studied history while an undergraduate at the College, has largely dismissed criticisms of his work, shrugging off the arguments as confusion over the content of “The Bell Curve.” After the Middlebury incident, he wrote online that “he’s never argued” that white men are superior to disadvantaged groups.

Caden W. Petersmeyer ’19, the treasurer of the Open Campus Initiative, said the group believes the Murray event is an opportunity to contrast the state of free speech at Harvard with that at Middlebury and other peer institutions.

“It would be a great opportunity to demonstrate our community's commitment to open discourse,” Petersmeyer said, adding that he doesn’t expect to see the same violence at Harvard.

The September event will be restricted to Harvard ID holders. Alexander R. Miller, the assistant dean of student life, said his office will work with students to “ensure their events are safe and successful.” Harvard reserves the right to cancel an event if it “pose[s] a risk to the safety or learning environment” of the school, according to its policies on free speech.

In an email, Murray indicated he’s not concerned about safety at the event.

“Safety is not a concern,” he wrote. “After Middlebury, the problem has been security so tight that students have had a hard time attending. I’m hoping Harvard figures out a happy medium.”

Petersmeyer said the organization’s mission is “not to inspire controversy.”

“I’d say that there’s a trap to fall into here. We’re about free speech, but we’re not necessarily trying to promote one viewpoint,” he said. “The whole point is not to provide balance, but to provide opinions that are outside of the mainstream of Harvard.”

The next event hosted by the group will be a debate featuring two conservative speakers and two liberal panelists.

“It’s not like we’re going to become best friends with white supremacists, but at the same time it’s necessary we have those conversations,” Musa said. “Of course, I don’t agree with Charles Murray’s perspective, but if I’m able to challenge it intelligently, maybe he’ll have a change of mind.”