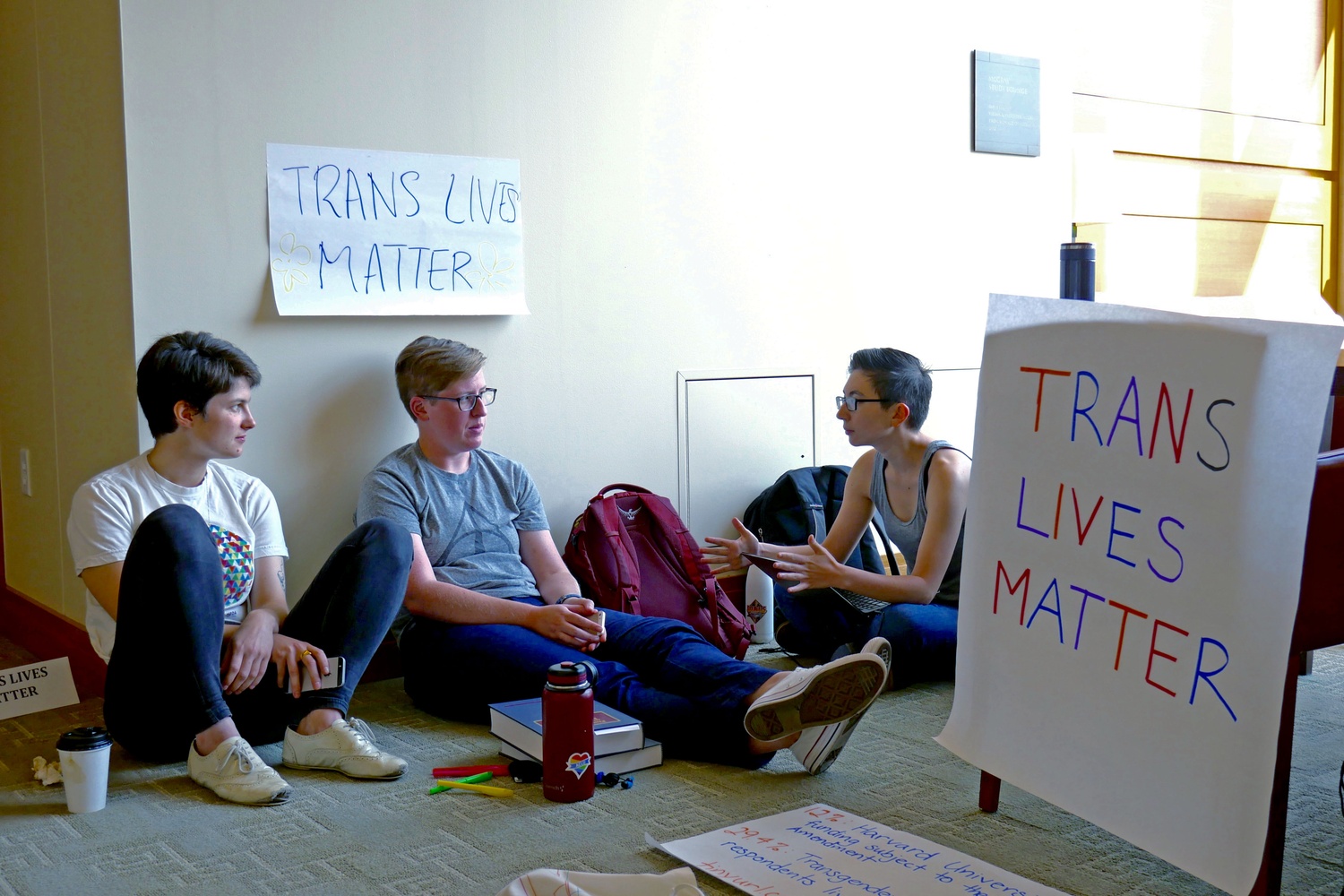 More than two dozen Law School students staged a sit in outside offices where students were interviewing for positions in the U.S. military Tuesday in protest of President Donald Trump’s announcement that transgender people may not serve in the military.

The protest, organized by HLS Lambda and Queer/Trans People of Color, took place over the course of the day as the U.S. Army and Air Force conducted interviews for their JAG corps, which allows students to serve in the military while completing their legal education.

Because of Trump’s decision to ban transgender people from the armed forces, some students argued that allowing the military to recruit on campus violates the Law School’s anti-discrimination policy. Harvard receives hundreds of millions of dollars in research funding from the federal government every year, meaning it must allow the military to recruit on campus or risk losing its funding under federal law.

Han Park, the co-President of Lambda, the school’s BGLTQ student group, said that the groups leading the sit-in wanted to bring public attention to the issue.

“We’ve had a dialogue with the school and said, ‘Listen, if you’re going to have an anti-discrimination policy in place, live up to it, or else don’t take the money, or do something else with the money,’” Park said. “That’s the conversation we’re going to be having, but we’re today, right outside the interview rooms, just to kind of show a physical presence saying that we don’t agree with this policy.”

In an email to students on Friday, Law School Dean John F. Manning ’82 acknowledged that allowing military recruiting on campus was in violation of the school’s anti-discrimination policies. Still, he said the Law School cannot bar the military from conducting interviews because of the Solomon Amendment, which requires federally-funded universities to allow military recruiting on campus.

“I very much regret this exception to our antidiscrimination policy,” Manning wrote. “Military service is a noble calling. Those who choose that path are entitled to gratitude and honor for the sacrifices they make protecting our freedoms. This fact, however, heightens the inequity and wrong of denying some of our students the opportunities that others enjoy to serve this country.”

Students in HLS Lambda and QTPOC met with Manning Tuesday to discuss the possibility of establishing an BGLTQ legal clinic at the Law School. Park said the groups have been pushing for the creation of such a clinic for a long time.

“It’s been years and nothing has been done, so we’re trying to use this leverage to say ‘it’s fine if you take the money, but lets funnel some of the money to direct work on the trans community and queer people of color in this community,’” Park said. “We’re looking to, hopefully if he is up for it, to have a discussion about what that would look like.”