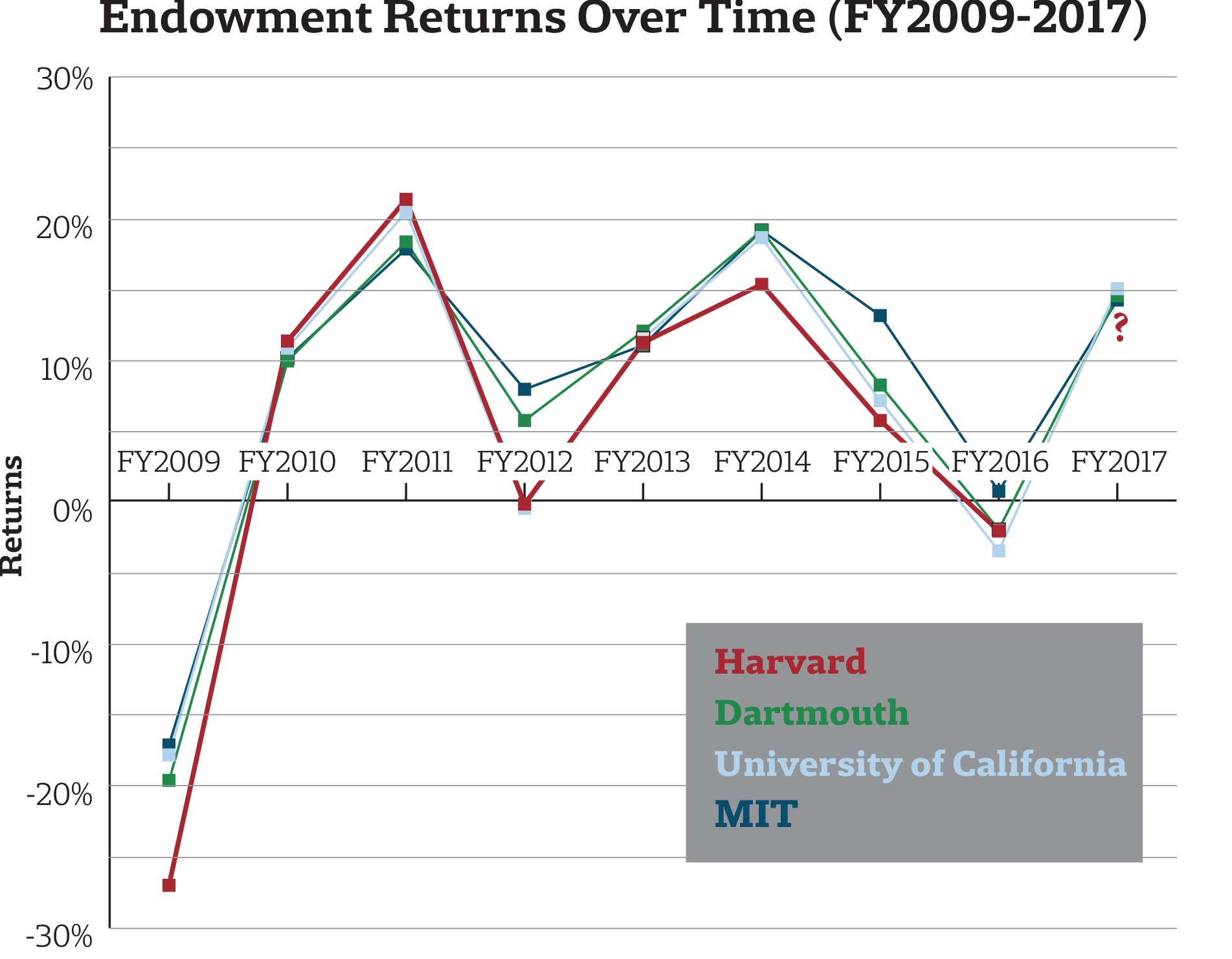 A year after Harvard’s endowment dropped nearly $2 billion in value, three of the University’s peer institutions have already posted double-digit returns for fiscal year 2017—which, experts say, may portend growth for Harvard.

Dartmouth College yielded 14.6 percent on its investments, a marked improvement over the negative 1.9 percent it posted in fiscal year 2016. Down Mass Ave., MIT reported 14.3 percent returns. And across the country, the University of California system returned 15.1 percent, bringing its endowment to $10.8 billion.

These strong returns at other large endowments could bode well for the world’s largest educational endowment, which has for years seen its performance outpaced across the Ivy League. 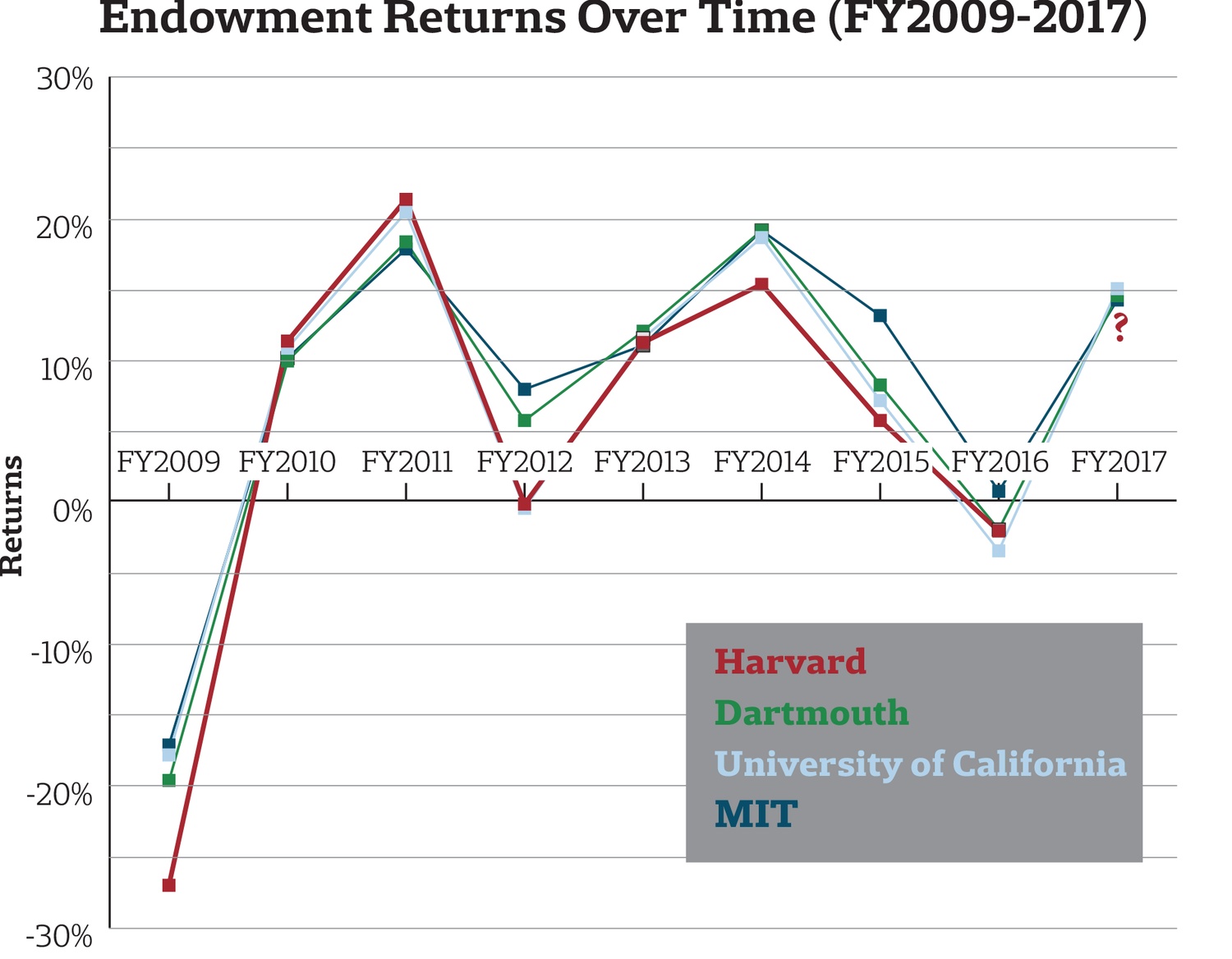 “If they still were carrying a reasonable stock of public equities, then they might have pretty good results, somewhere between 12-15 percent,” Charles A. Skorina, a financial headhunter, projected.

Harvard needs the boost. After Harvard Management Company posted negative 2.0 percent on its portfolio in fiscal year 2016—and, combined with other financial flows, lost nearly $2 billion in endowment value—University President Drew G. Faust said budgets would be constrained across the University.

Those worries haven’t abated over the past year. In an interview with the Harvard Gazette, a University-ran publication, Faust said weak endowment returns—coupled with the possibility of deep cuts to federal research funding—remain a threat to the University’s financial health.

“There’s general agreement across higher education that endowment returns are likely to be more constrained in the decade to come than they were, for example, in the early 2000s before the financial crisis,” she said. “We have to be imaginative about what we do, how we do it, how we make choices, and also about other ways of generating resources,” she continued.

Dartmouth attributed its high returns to the “broad rise in public markets” domestically and abroad. MIT and the University of California noted, though, that market trends can be difficult to predict: “The world has become more uncertain and financial markets more volatile,” MIT’s treasurer wrote in the university’s annual report.

Skorina predicted public markets will continue to flourish so long as companies and investors believe Republican lawmakers can advance a “business-friendly” agenda.

He added public markets might balloon if the White House unveils a significant tax cut, possibly resulting in “another few years of good earnings” for institutions with robust investments in public equity.

In the last fiscal year, a plurality of Harvard’s investments—around 20 percent—were in private equity. But a lot has changed at HMC over the past year. The firm hired N.P. Narvekar as its CEO shortly after posting its fiscal year 2016 returns, and he has since moved to lay off half of the firm’s staff, outsourced the management of most of its funds, and unloaded some of its private equity and idiosyncratic natural resource assets.

Though Narvekar cautioned it might be five years before these changes manifest in Harvard’s returns, the results for this fiscal year will provide the first glimpse of how the firm performed under Narvekar’s leadership.