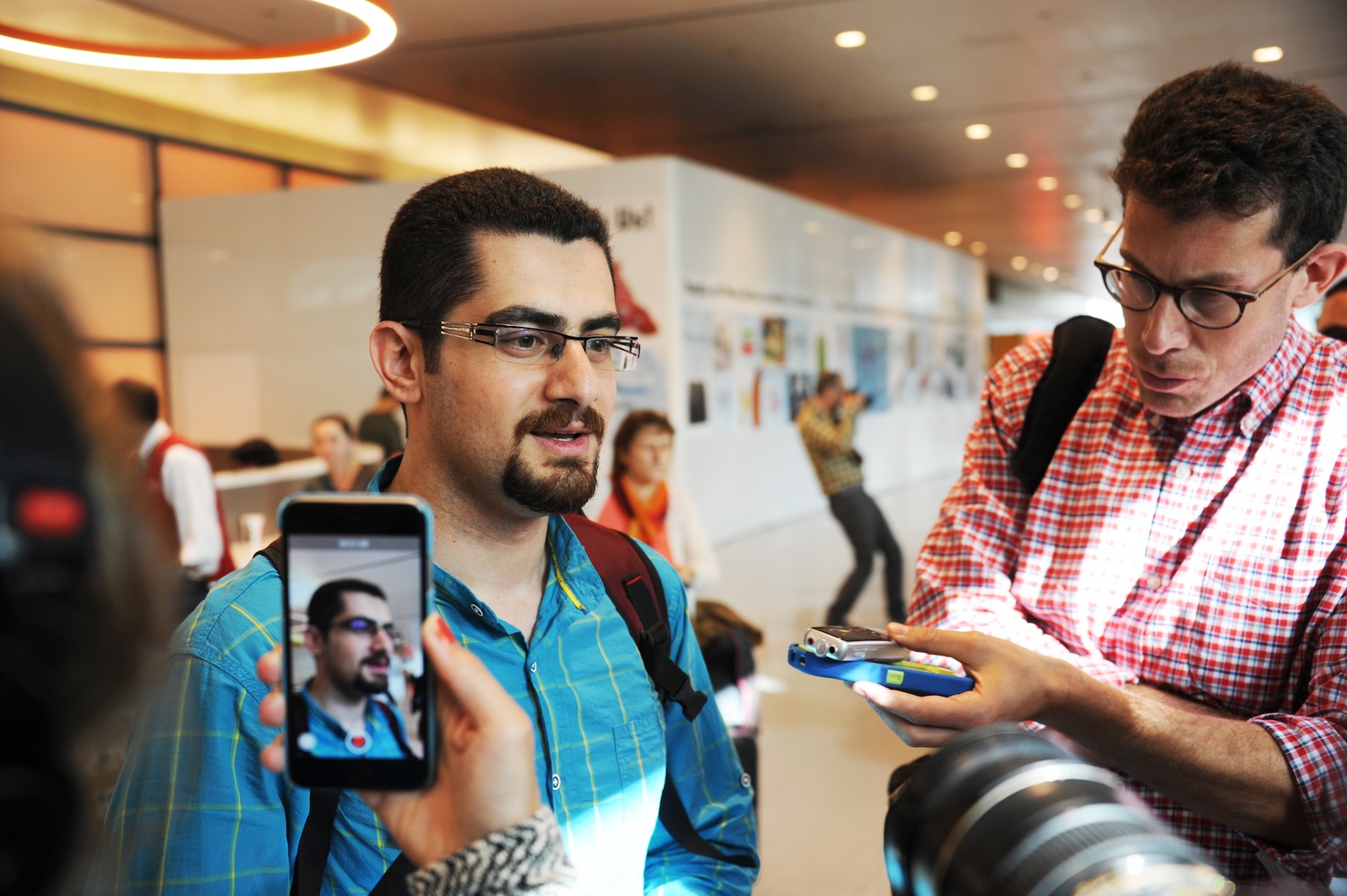 Saravi’s previously-approved visa was immediately suspended after Trump’s order. He spent the next several months working to reinstate his visa and to obtain a visa for his wife, Khatareh.

“The order impacted all of my life,” he said Wednesday.

At the airport, Medical School Professor Thomas M. Michel ’77, who heads the lab Saravi will join—and who brought the accordion—embraced his newest employee in silence for almost a minute. Then he stepped back and gripped Saravi’s shoulder with one hand.

“Yes, it takes two years,” Saravi quipped. He added in a low voice, “All worth it.” 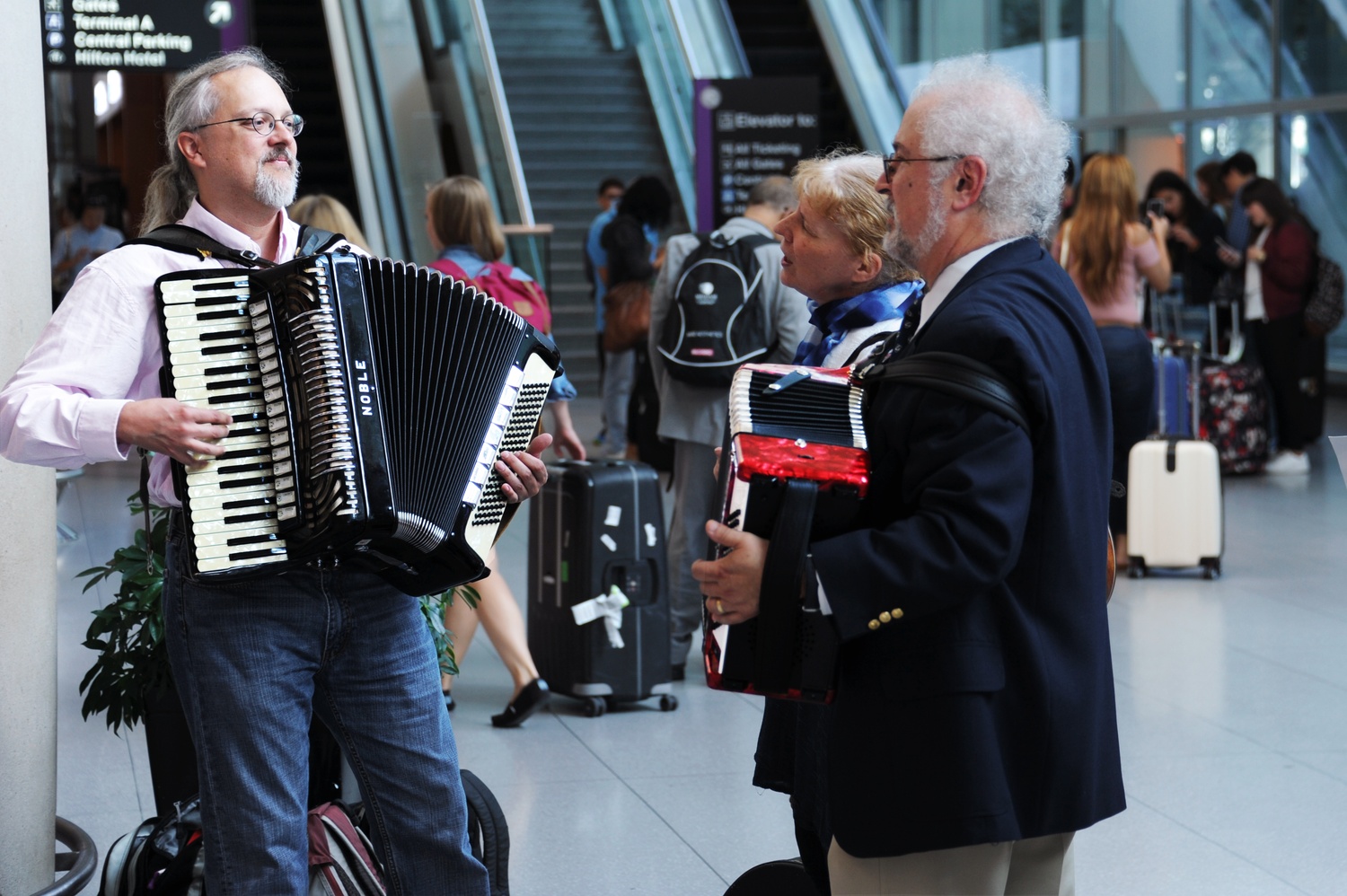 Saravi, who will study the effects of diabetes on the heart, is one of four Iranian scientists slated to conduct research at Harvard who were barred from the country by Trump’s order. The other three—Samira Asgari and sisters Marzieh and Amene Asgari, who are not related to Samira—flew into the United States in February.

On Wednesday, Saravi, reading from a prepared statement typed out on his phone, said he thinks immigration restrictions restrict scientific progress.

“Patients in Iran and patients in the United States suffer from the same diseases, and I hope that scientists and doctors in both of our countries—Iran and the United States—can work together to advance our knowledge and discover new cures,” he said.

Khatareh, who arrived with Saravi Wednesday, stood behind her husband, nodding.

Hours before the couple debarked, Michel gathered roughly a dozen friends and colleagues to await Saravi by the international arrivals gate. Some brought handmade posters, one of which bore a painstakingly re-drawn graph from one of Saravi’s published scientific papers.

“Science transcends borders,” it read, in letters the color of the Iranian flag.

Others brought instruments: two accordions and a guitar. For roughly half an hour, Michel and two friends entertained the crowd with music, sometimes taking requests, sometimes playing Iranian folk songs.

At one point, Michel held up his red Weltmeister accordion and declared it his “protest accordion,” named “Rosie” for Rosie the Riveter.

“I think that this is a good day for science,” Michel said. “And I think it’s an indication of the power of the press, the legal system, and the support of politicians in Washington, who can take an unfair edict, resist it, and prevail.”

The moment Saravi and his wife crossed through Boston Logan’s international arrivals gate, Michel and reporters swarmed to greet them. For several minutes, Saravi stumbled over his words, saying he was “too excited” and emotional to answer questions.

“Bans and restrictions make humans stronger,” Saravi said. “Now I am really stronger than before because I have passed many limitations, many restrictions.”

“The hardness of this is the coat of glory,” he added.

Saravi will start work next week.