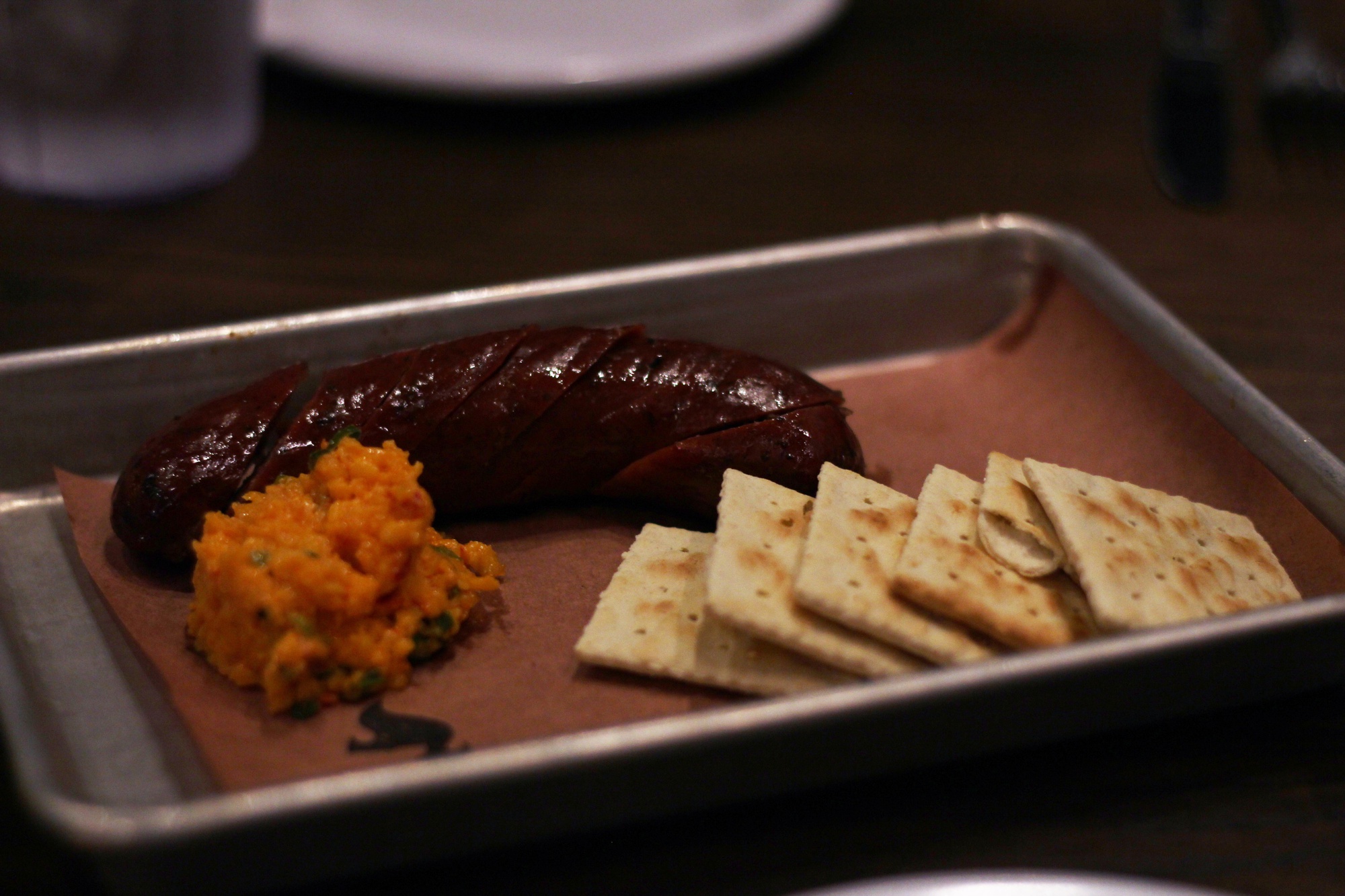 The Smoke Shop is a BBQ restaurant in Cambridge, Boston and Somerville.
By Jack M. Schroeder, Contributing Writer

The Assembly Row Smoke Shop restaurant is best experienced when there's going to be a football game. Large plasma televisions greet patrons walking in, and they populate the restaurant densely enough that just about every seat has a good view of at least one of them.

Part of this stems from the location’s open, almost cavernous design. It houses a large traditional bar, a lengthy stand-alone bar table, booths along the wall, and spaced-out tables in the middle. The trophy-adorned walls feel miles apart, although the restaurant makes good use of the space with an open kitchen in the center. A section of the ceiling houses a minimalist American flag constructed from colored scrap metal. Overall, the space initially evokes the feeling of being in a warehouse that, while clean and modern, appears similar in style to competing restaurants in the area.

That area, however, is a bit of a hike from Cambridge, especially when the original Smoke Shop is easily accessible in Kendall Square. This reviewer recommends taking an Uber or Lyft to Assembly Row. While biking is an option, your stomach will thank you later for opting to rideshare.

The appetizers adequately prepare you for the upcoming crusade that is the main course. A sturdy yet exquisite pork belly and peaches dish is exclusive to the Assembly Row location. With a large enough appetite, the mac & cheese bites are also worth ordering. The subtle inclusion of spinach to the usual combination of fried cheese and bacon bits is a welcome addition.

The menu tempts patrons with its combination platters. The “Pit Crew” encompasses two meats and two sides, and its “Pit Boss” counterpart ups the ante by providing three meats and three sides. Thinking we could conquer the “Pit Boss," the photographer and I opted for pulled pork, brisket, and ribs as the meats, along with mac & cheese, bacon collards, and cornbread as the sides.

Each meat is exquisite in its own way. The pulled pork is especially noteworthy for its savory skin and overall tenderness. The ribs may pale in comparison, but the brisket, usually cast aside as a fine but inessential barbecue dish, punches well above its weight. The sides (particularly the collards) supplement the main course in the best way possible, offering a respite from the onslaught of meat. The specials are intriguing albeit pricey: Either of the two weekend specials — Saturday’s Big Beef Rib or Sunday’s Baby Back Ribs — will set you back just over $30. Still, the price may be worth it. Even a sliver of the beef rib is enough to leave you wanting more.

Owner and barbecue pitmaster Andy Husbands has also crafted three barbecue sauces that diversify each meat’s flavors: one sweet (but not overwhelming), one spicy (but not overbearing), and one mustard-like (but not overcompensating). These condiments pair well with each of the dishes, providing an extra kick to the meaty backbone of your meal.

After this feast, you no longer feel stuck in a warehouse. The environment around you almost feels religious. Andy Husbands is not interested in pushing barbecue into a new frontier, but rather seeks to worship it as it exists: meats and sides that need not be fancy to be delicious. With this knowledge, the spacious layout of the restaurant signals that you have walked into something akin to a cathedral. The Smoke Shop BBQ’s placement at Assembly Row drives home the devout connection. You are now among the prototypical churchgoers that fill Husbands’ pews on weekends, hungry to share the experience of eating savory barbecue while watching football. It does not matter if you arrive at this restaurant as a believer in the power of his cooking or a skeptic. In the end, provided you fully immerse yourself in the environment around you, you will leave this basilica of barbecue satisfied.