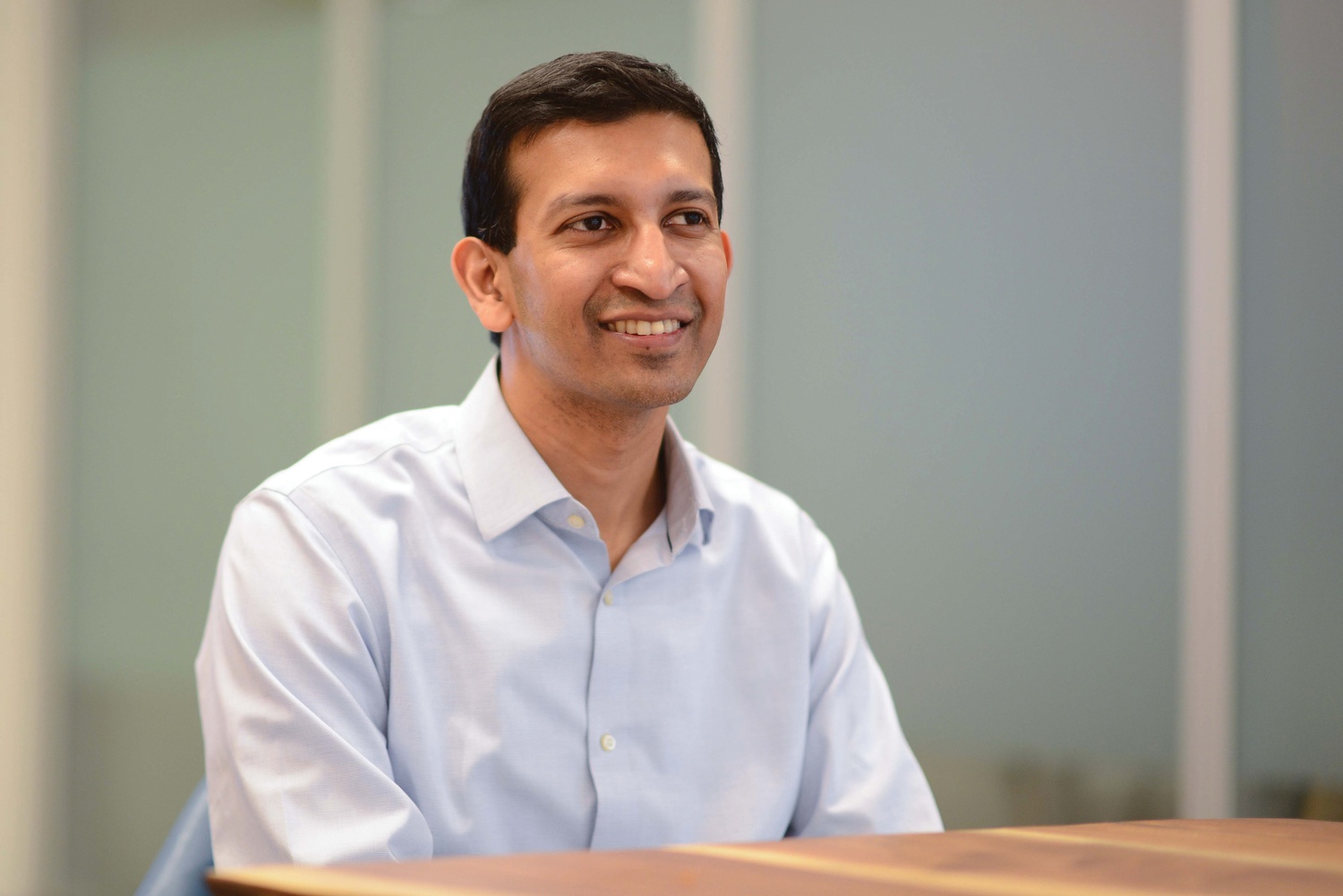 Raj Chetty '00, the William A. Ackman Professor of Public Economics, has returned to teach at Harvard after spending three years at Stanford. By Melissa W. Kwan
By Cecilia R. D'Arms, Crimson Staff Writer

Economist Raj Chetty ’00 returned to Harvard this fall not just to teach but also to develop "Opportunity Insights," a new institute of researchers and policy analysts working to reduce economic inequality in America.

The 30-person organization will collaborate with city governments and community groups across America to address disparities in economic opportunity that stem from race, education level, and place of birth, according to Chetty.

Chetty — the winner of both a 2012 MacArthur “genius grant” and the prestigious John Bates Clark Medal — came back to Cambridge this semester after spending three years teaching at Stanford University.

In preparation for his return, the University renovated an open-plan Massachusetts Avenue workspace, building an office for the institute large enough to accomodate up to 50 people.

This research — initially called the “Equality of Opportunity Project” — gained significant national attention. The group's 2018 study, which revealed a dramatic disparity in economic mobility for white and black men, landed on the front page of the New York Times website earlier this year. In the wake of this publicity, Chetty said, policymakers began asking the economists how to solve the problems their research unearthed.

“We started to get more and more requests from people saying, ‘We want to use these research studies to actually change things.’” Chetty said. “A lot of people thought it would be really useful to have a team that would take that next step and be a bridge from research to practice.”

As a result, the three rebranded and, on Oct. 1, formally launched their new project: Opportunity Insights. Their team has grown from six staff members in January 2018 to 30 including 15 predoctoral fellows, seven policy staffers, and three “Research Principals” with offices in the lab — Economists Claudia D. Goldin, Lawrence F. Katz, and David J. Deming.

The team also recently launched the "Opportunity Atlas," a free, interactive online map that lets users pore over anonymized census data to inspect economic opportunity levels across the whole United States or within a single neighborhood. The program also allows users to overlay any dataset they want for their own research purposes.

Opportunity Insights Communications Director Shannon K. Felton Spence and pre-doctoral fellow Federico Gonzalez said reporters and policy makers from cities across the country have used the Atlas for their own research. They also said journalists' questions can sometimes guide the team’s own research.

“Sometimes their questions surprise us, but that’s sometimes good because we find new ideas from reporters who have explored this data farther and have new questions that we haven’t taken a look at,” Gonzalez said.

Though Chetty’s work has drawn international attention, he said he thinks his team will do some of its most important work at the local level via “partnerships” with municipal governments and local organizations.

“We’re focused on cities because we think that’s one natural lens through which to work with these issues,” Chetty said.

The policy team is currently coordinating with municipal leaders in Charlotte, NC. Chetty said the team hopes to develop a “protocol” for engagement through its work with Charlotte which it can then apply to other partnerships — including a possible coordination with Boston.

“I came in for my interview, and they said, ‘We’re in the New York Times all the time, but how do we get in the Boston Globe?’” Felton Spence said. “That’s a good place to work.”

Chetty is not teaching this semester but will offer his flagship undergraduate lecture Econ 1152: “Using Big Data to Solve Economic and Social Problems” in the spring. Chetty said the class, which is targeted to freshmen and sophomores, introduces students to economics by asking “big picture questions” about income inequality, education, and climate change.

“I taught this once at Stanford, and it was a great success,” Chetty said. “In terms of the number of people enrolled, it was larger than the equivalent of Ec 10. And the composition of the students was what interested me the most, many more women and minority students.”

While Harvard students will have the opportunity to be in the classroom with Chetty next semester, the popular class is already available in its entirety on Opportunity Insights’s website — as part of the organization’s mission to train “the next generation of researchers, practitioners, and leaders.”