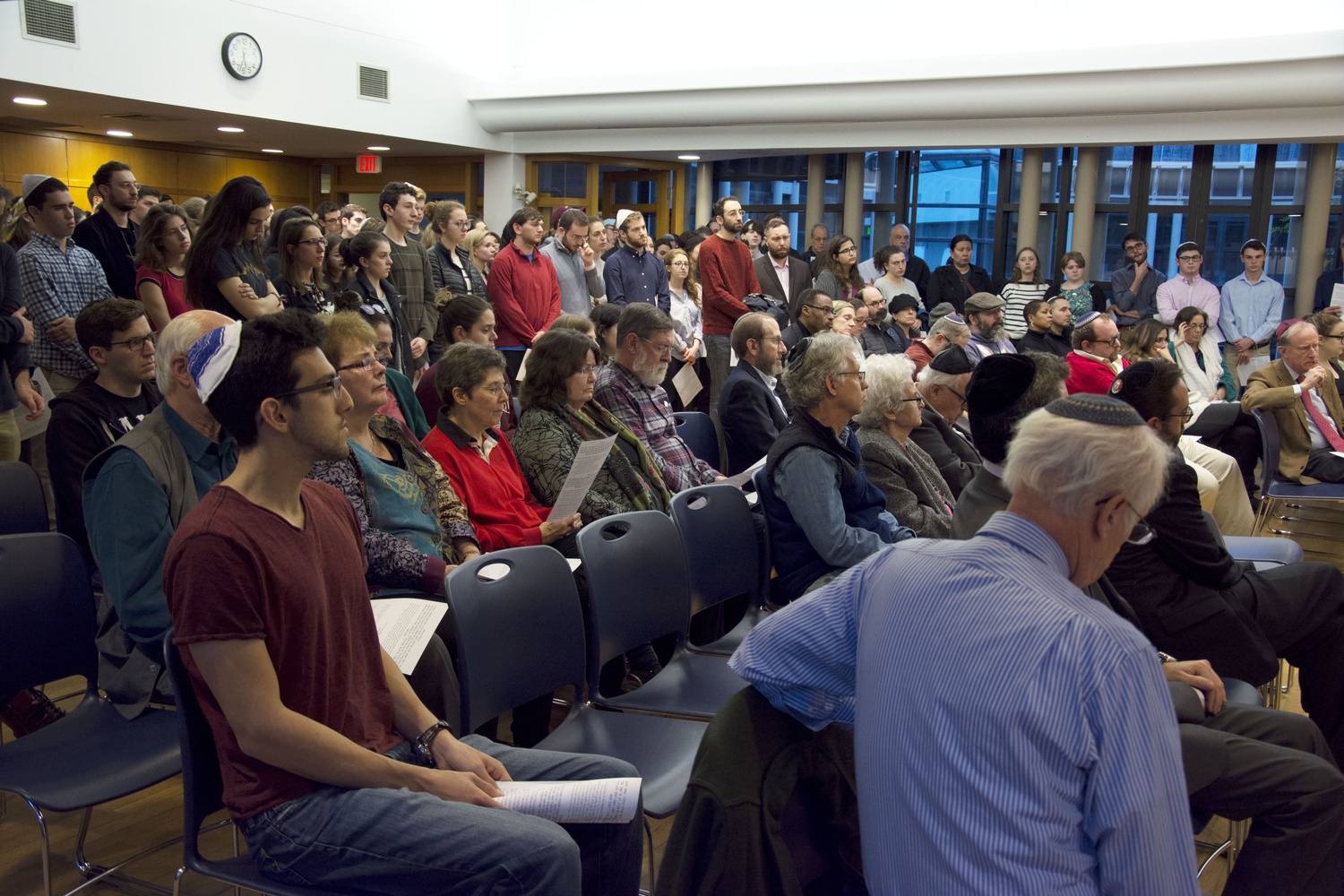 Harvard Hillel held a vigil to honor members of the Tree of Life synagogue. By Jocelyn Wang
By David J. Benger
David J. Benger is a second-year student at the Law School. He is the president of the Harvard Law School chapter of the Louis D. Brandeis Center for Human Rights Under the Law.

On Sep. 6, 1972, Munich Olympic Games correspondent James K. “Jim” McKay looked at the television camera and solemnly pronounced, “Our greatest hopes and our worst fears are seldom realized. Our worst fears have been realized tonight.” All 11 Israeli Olympic athletes who were kidnapped by Black September, a Palestinian terrorist organization, had been confirmed killed.

I have thought of that moment frequently during the last few days.

The parallels to the attack on the Tree of Life synagogue in Pittsburgh are striking. Eleven people died in both attacks. Equally poignantly, both attacks yielded victims who had themselves lived through the era of the Holocaust.

Perhaps most importantly, both were culminations of hateful rhetoric gone unchecked. Anyone monitoring the rhetoric of Palestinian militants and their German Nazi allies, or of the Pittsburgh shooter (whose name deserves no further mention), knows that they were steeped in virulent anti-Semitism.

In response to these events and other incidents of hate around the country, the time has come for Harvard University to adopt a definition of anti-Semitism.

The regulation and constriction of hate speech and inflammatory rhetoric is not a merely an academic issue. Hate speech has real consequences, and finding a solution for the metastasizing trend of anti-Semitic rhetoric toward Jewish people and Jewish institutions in the United States and abroad has become vital.

Anti-Semitism is on the march in the Western world. Just this week, an executive at Campbell’s Soup was ushered out for tweeting that Jewish philanthropist George Soros was responsible for the large group of refugees currently traveling to America’s southern border. This was not an isolated incident. The seeds of this conspiracy — that Jews seek to centralize money and power to undermine Western civilization — harken back to The Protocols of the Elders of Zion, a famous anti-Semitic text, and before.

The omnipresence of this problem today is not unique to the US nor to the right wing. For example, Jeremy Corbyn, the leader of Britain’s Labour Party has openly defended anti-Semites and has made many anti-Semitic statements himself. He even laid a wreath at a memorial for members of Black September, the very same organization behind the Munich attacks.

How do we shape the rhetoric of our community to be inclusive and safe for all its members? Writing in 1982, former University President Derek C. Bok noted that, “At a time of such dissatisfaction and concern over the level of ethical behavior in the society… educational institutions [should] consider how they might use their strategic position to encourage students to think more deeply about ethical issues and strengthen their power of moral reasoning.”

For students to contemplate ethics, they must feel safe on their campus, and that their serious moral inquiries will not be derailed by fanaticism and hate. As hate speech permeates our national conversation, leading universities have the opportunity to stand up as a bulwark against terrorizing rhetoric.

The Harvard community came together on Sunday evening to honor the memories of the eleven people who were murdered in Pittsburgh, and to give solace to those who fear the spreading divisiveness and hate in our country. University President Lawrence S. Bacow spoke eloquently: “We can do more than simply comfort each other,” he said. “We can vote for those who would bring us together as opposed to those who would divide us.”

President Bacow is correct, but voting is not enough. Punching a ballot annually is insufficient. We must start with common-sense policies right here in our very own university. We must define anti-Semitism.

I offer the definition put forward by the International Holocaust Remembrance Alliance: “Antisemitism is a certain perception of Jews, which may be expressed as hatred toward Jews. Rhetorical and physical manifestations of antisemitism are directed toward Jewish or non-Jewish individuals and/or their property, toward Jewish community institutions and religious facilities.”

While Harvard would be the first nationally-regarded university to adopt such a resolution, it would be far from the first public entity to take such a step. Among many international bodies, it is the definition used by the State Department.

Jewish congregations customarily split the old testament into weekly portions to be read on the Sabbath. This week’s Torah portion begins with Abraham wishing to bury the matriarch Sarah in a place of honor. He refuses a gifted burial plot, insisting on paying for the land he wishes to use. If he pays for the land, then it is his, the logic goes. Then he can guarantee that it is cared for properly.

This is the story that will be read next Saturday in synagogues across the world, including in the shell-shocked Jewish community of Pittsburgh. It is a story about the value of taking ownership of the community you wish to build, and the legacy you wish to leave behind, rather than merely deferring to the status quo.

In the spirit of Abraham, we must resist the urge to simply accept our reality. We must work to ensure that the University community we call home today, and the communities we call home in the future, are truly our own. To ensure the safety of our friends and family members, we must demand that all hate speech, including hateful anti-Semitic rhetoric, be recognized for what it is and condemned.

Jews and good people around the world mourned the victims in the aftermath of both the Munich massacre and the Pittsburgh shooting. But our next step matters. We must rise to prevent these tragedies from repeating. Our first step should be to adopt a clear definition of anti-Semitism for the Harvard community.

David J. Benger is a second-year student at the Law School. He is the president of the Harvard Law School chapter of the Louis D. Brandeis Center for Human Rights Under the Law.