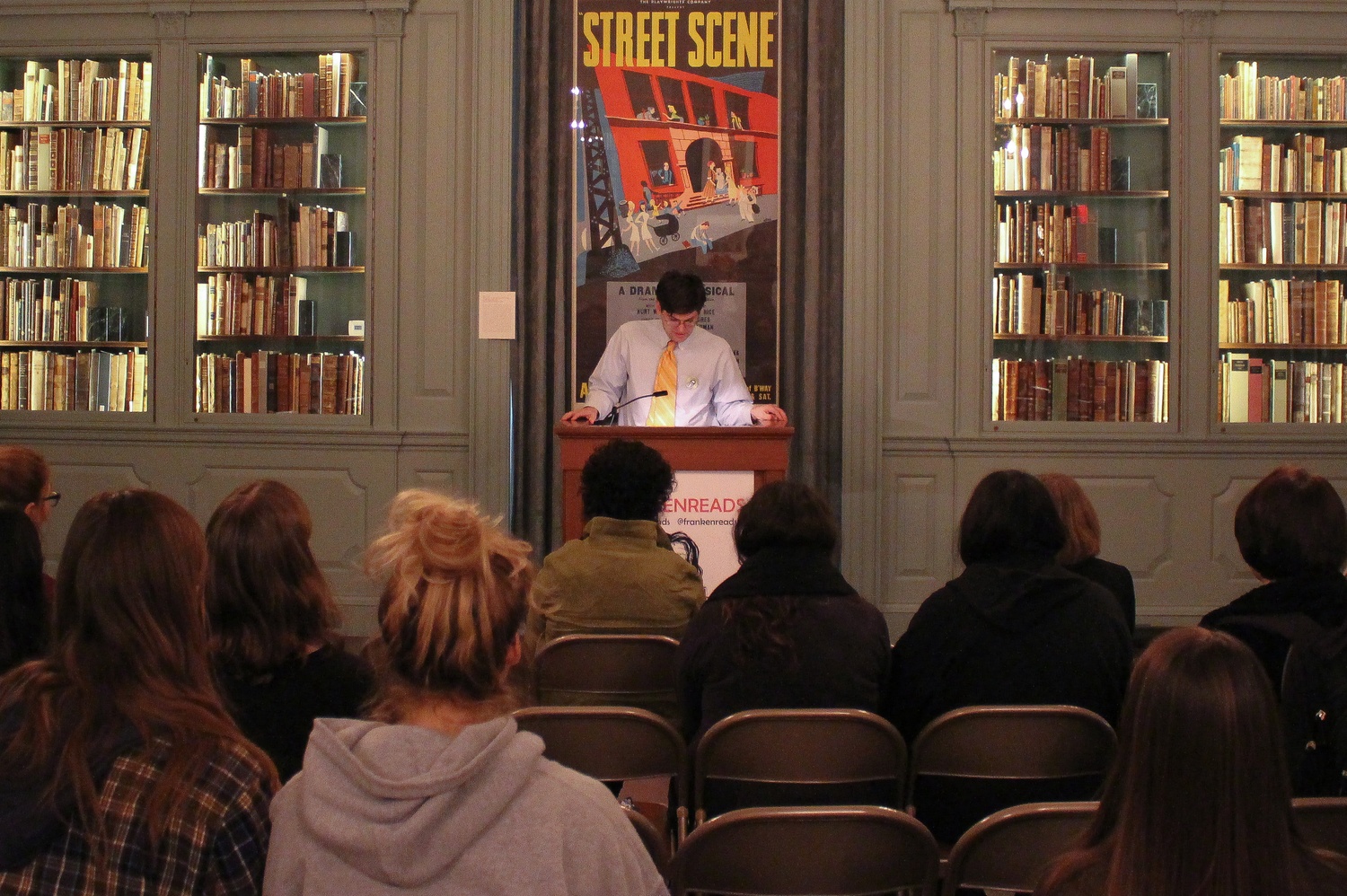 There was a marathon reading of Mary Shelley’s Frankenstein in Houghton Library from 9am until 4pm Wednesday. By Hayoung Hwang
By Joshua S. Archibald and Kevin R. Chen, Contributing Writers

Houghton Library hosted a Halloween reading of Mary Shelley’s “Frankenstein” in honor of the 200th anniversary of the book’s publication, attracting scholars, students, and members of the public alike.

The event marked the first time the Houghton Library has held a marathon reading, according to lead organizer and Houghton curator Leslie A. Morris. The reading was part of Frankenweek, a week-long celebration at Harvard that featured a symposium on the significance of “Frankenstein” and screenings of eleven different film adaptations of the book.

“It is one of those novels that really has permeated culture in a way. Considering that it was Mary Shelley’s first book, it’s quite remarkable,” Morris said.

Participants could sign up to read aloud a 10-minute section of “Frankenstein,” and a steady stream of people flowed in and out of the room throughout the event, grabbing treats from the back while listening to sections of the novel. Time slots to read were filled within 36 hours of the sign-up form’s posting, Morris said.

The reading was affiliated with Frankenreads, an international celebration organized by the Keats-Shelley Association of America. People from 46 countries around the world participated in similar marathon readings of “Frankenstein.”

Members of the class English 148: “Modern Monsters in Literature and Film” participated in the event because they had studied “Frankenstein” as part of the course.

“I was a little nervous when I started, but once you get into the flow of things, it’s so easy to read it because you can feel the emotion of the words,” said Aislinn S. Devlin ’21, a student in the class.

“I like reading aloud,” said reader Hannah M. McCormack ’18. “I think it’s a really fun dynamic that gets added to reading. When I was little, my dad used to read to us aloud for an embarrassingly long time — it was the best way to hear a story.”

English Professor Stephen J. Greenblatt, who also read at the event, said he found the experience of hearing the novel “intellectually illuminating” and emphasized the book’s significance over the past two centuries.

“It’s not a small achievement to create a modern myth that anticipated our current anxieties about artificial intelligence, about science fiction creatures, about the human capacity to create life and the possible consequences of creating life,” Greenblatt said. “I mean, she did this miraculously really far anticipation of the actual means that we’ve now developed to do some of the things she was dreaming about.”

Allison Pingree, director of cross-school programming at the Harvard Initiative for Learning and Teaching, said she initially planned to leave after reading her section of the text but decided to stay.

“I think it was about the combination of the celebration, the text, and the community that brought me here, and it’s been wonderful to hear,” she said. “It’s an important moment to reflect on how language intersects with how we relate with each other.”