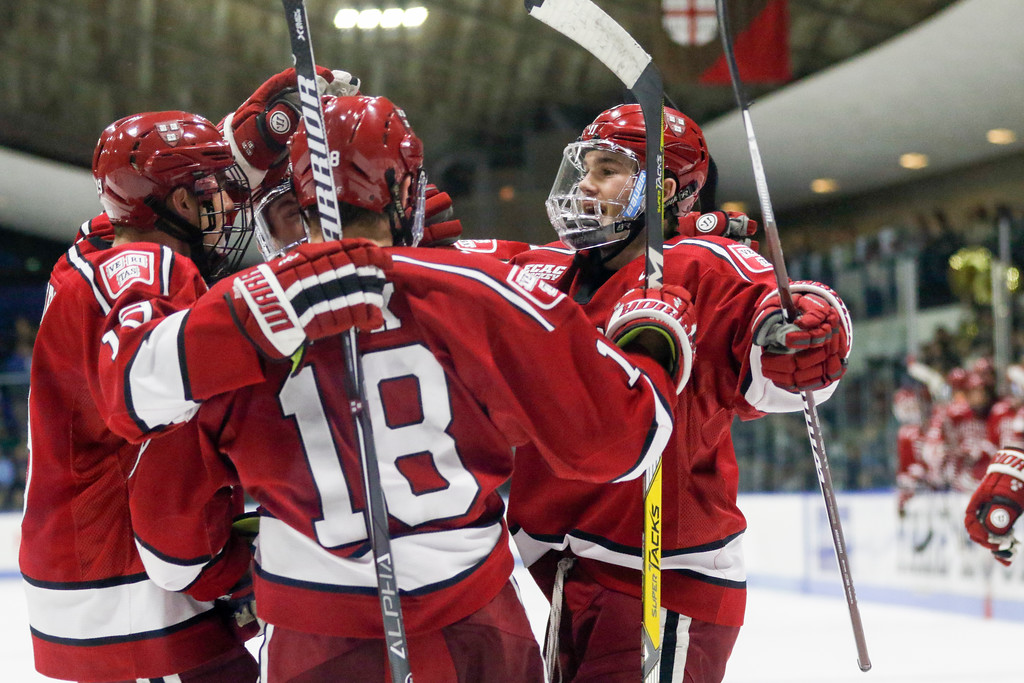 Harvard's 40.9% power play efficiency is second only to Princeton in the NCAA. The Crimson can thank Reilly Walsh for much of that, as his team-leading four goals this season have all come on the man advantage. By Timothy R. O'Meara
By Stuti R. Telidevara, Crimson Staff Writer

PROVIDENCE, R.I. — After 20 minutes of play, the Harvard men’s hockey team found itself in an uncomfortably familiar position. Its opponent, Brown, had broken the ice late in the first period, on a power play goal from rookie Tristan Crozier. That left the visitors staring at a deficit for the fourth time in five games so far this season. To lose to the yearly ECAC bottom-dwellers Bears on top of a winless start would have been a new low.

By the start of the middle frame, though, Harvard (1-2-2, 1-2-2 ECAC) fired up its offensive talent, and stormed back to defeat Brown (1-4-1, 1-3-1) by a score of 5-2. With tallies coming from five different skaters, the Crimson secured its first win of the 2018-19 campaign and nabbed three of four possible points on the weekend roadie after a tie at Yale.

“We knew what we had to do,” said sophomore defenseman Reilly Walsh. “[We were] pretty much just sick and tired of losing, to be honest…. We just played with a lot more desperation.”

Harvard came out of the gate with a jump to its play after a lukewarm first frame — a consequence, perhaps, of Friday’s high-energy rivalry game as compared to the quiet environs of Meehan Auditorium. Sophomore forward Jack Donato carried into the Bears zone on a 2-on-1 with junior Justin Szeto two minutes in, but he did not need to set up his teammate. Instead, Donato notched his first of the season and tied the game with a backhand over the glove hand of Brown junior net-minder Gavin Nieto. 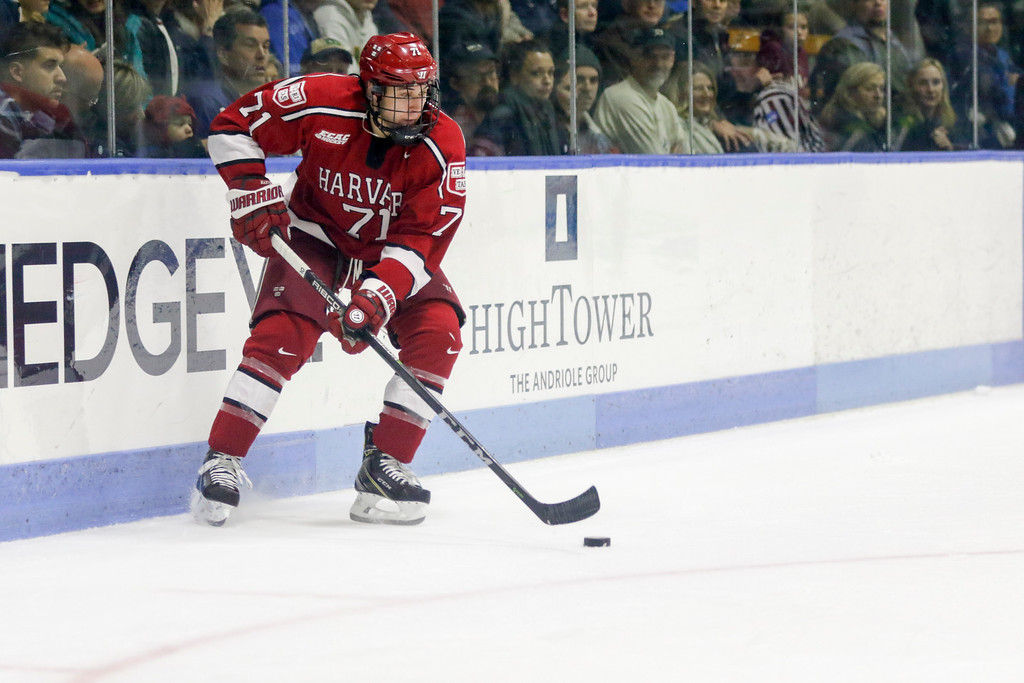 Despite taking a punishing hit the day before against Yale, Frédéric Grégoire played a full game and notched the Crimson's go-ahead goal on Saturday. By Timothy R. O'Meara

Though the visitors were unable to capitalize on a 5-on-3 opportunity, the Bears’ penalties allowed the Crimson to take back control of the game. Harvard snatched the lead on that momentum swing, as junior Frédéric Grégoire picked up his first point on a hard-angle shot from Nieto’s right.

“Oftentimes I choose to get pretty fired up myself [to motivate the team],” said head coach Ted Donato ’91 when asked how the team bounced back in the middle frame. “But tonight I went the opposite direction and said, ‘Hey, listen, we weren’t very good. But ultimately the standard’s got to be set by the guys in this room.’”

The Crimson was handed a chance to convert on the man advantage and extend its lead 14 minutes into the middle period. Sticking to a tried and tested system, Harvard set up its umbrella with junior defenseman Adam Fox quarterbacking, and Walsh and rookie forward Casey Dornbach manning the circles. A passing play between those three allowed Walsh to rip a one-timer right into the cage, putting the Crimson up 3-1.

Walsh currently leads the team in goals (4), all of which came on the power play. It’s difficult to overstate the effectiveness of the man advantage unit, which has converted 40.9% of its chances so far, good for the second-best rate in the country. Nine of Harvard’s 21 tallies this season have come from 5-on-4s. Fox is crucial to the efficiency of that unit — he paces the squad with 12 points (2–10—12), and his 2.4 points per game are tied for best in the NCAA.

“As great players do, [Fox] makes others around him better,” coach Donato said. “He really is a special player. As coaches, we realize that. I’ve been around the game long enough and seen enough great players to know one when I see ’em. He’s a wizard up there, really utilizing the skillset of the other guys on the power play." 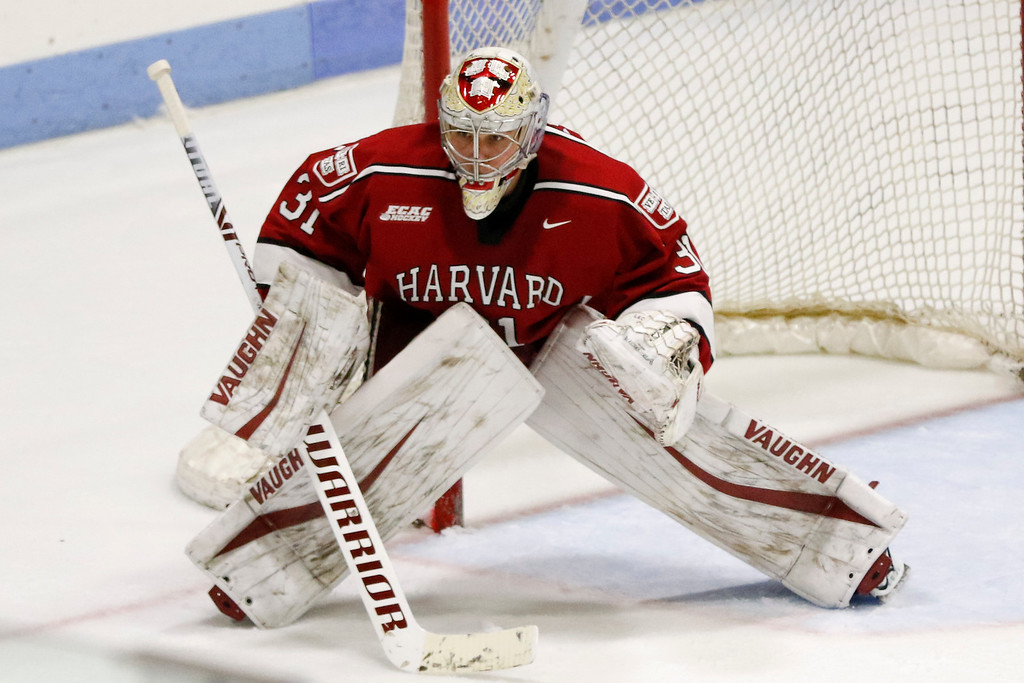 Another penalty burned Brown midway through the third period, and once again, the Crimson found its target. Rookie forward Baker Shore held the puck at the goal line just long enough to feed sophomore Jack Badini in the slot; Badini snuck the biscuit past Nieto for Harvard’s fourth goal of the night. Though the Bears got one back courtesy of co-captain Tommy Marchin, an empty-netter from Fox sealed the deal. The Crimson escaped with no leads lost, and a decisive result after two straight tie games.

Of all the players that showed an improvement, perhaps the most important was senior goaltender Michael Lackey. A high-event contest at Yale may have tested Lackey more, but the result at Brown (2 GA, .920 SV%) further bolstered his numbers. Though Harvard fans can expect the coaching staff to test the waters sometimes with sophomore backstop Cam Gornet, two solid games may put Lackey between the pipes again come Friday.

The Crimson returns to Bright-Landry to host Arizona State in a break from conference play next weekend. The Sun Devils are coming off a series of triumphs, including wins against Michigan State and No. 8 Penn State. That is just one of the tests Harvard will face, as ASU happens to own the nation’s best penalty kill percentage.

“We can still tweak some things and continue to improve,” coach Donato said. “We have some guys that are looking more comfortable with the roles they have…. [Playing Arizona State] is a great opportunity for us to test ourselves and develop more of an identity as a team.”