The Crimson clashed with storied rival Yale on Friday night in a game defined by crushing hits, momentum swings, and clutch goals. The game seemingly had everything but a decisive result.
By Spencer R. Morris 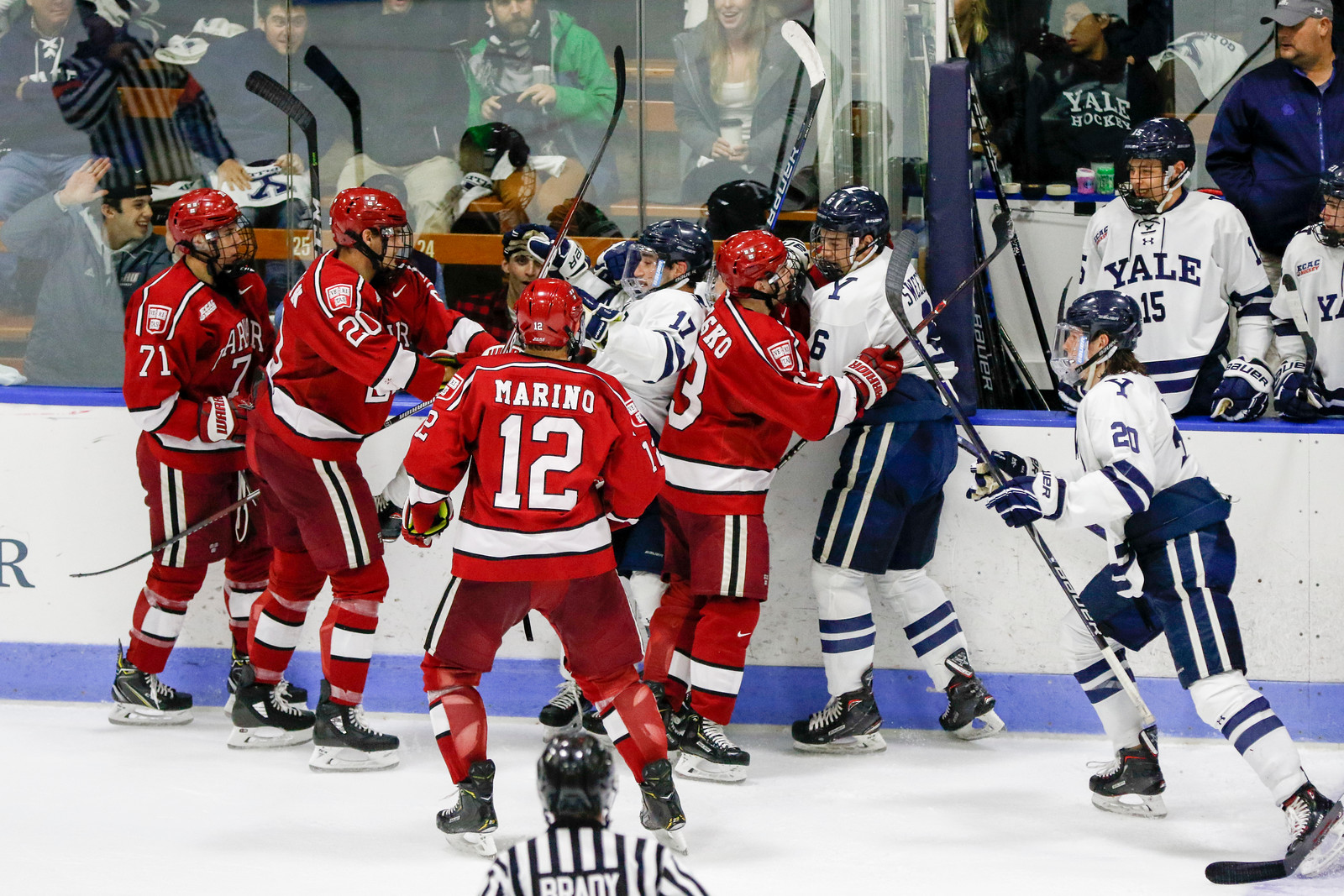 Consecutive shifts of aggressive play in the second period elevated the intensity of the contest from that point forward. By Timothy R. O'Meara

NEW HAVEN, Conn. — The Harvard men’s hockey team clashed with storied rival Yale on Friday night in a game defined by crushing hits, momentum swings, and clutch goals. The game seemingly had everything — everything but a decisive result.

The Crimson (0-2-2, 0-2-2 ECAC) and the Bulldogs (2-1-1, 2-1-1) skated to a 3-3 draw after 65 minutes of hockey, leaving the sold-out Ingalls Rink crowd dissatisfied. Harvard is still in search of its first outright victory of the season and has failed to notch a win through its first four regular-season bouts for the first time since 1940.

“I liked our resilience,” Crimson coach Ted Donato ’91 said. “We kept coming, made a lot of good plays. Obviously, we would’ve liked to hold onto the lead there at the end…. All in all, we had a lot of guys that showed a lot of determination and grit.”

More than halfway through the second period, a physical shift ended with sophomore forward Jack Badini suffering a rough collision at the corner-boards to the left his net-minder, senior Michael Lackey. The game was never the same after that point. 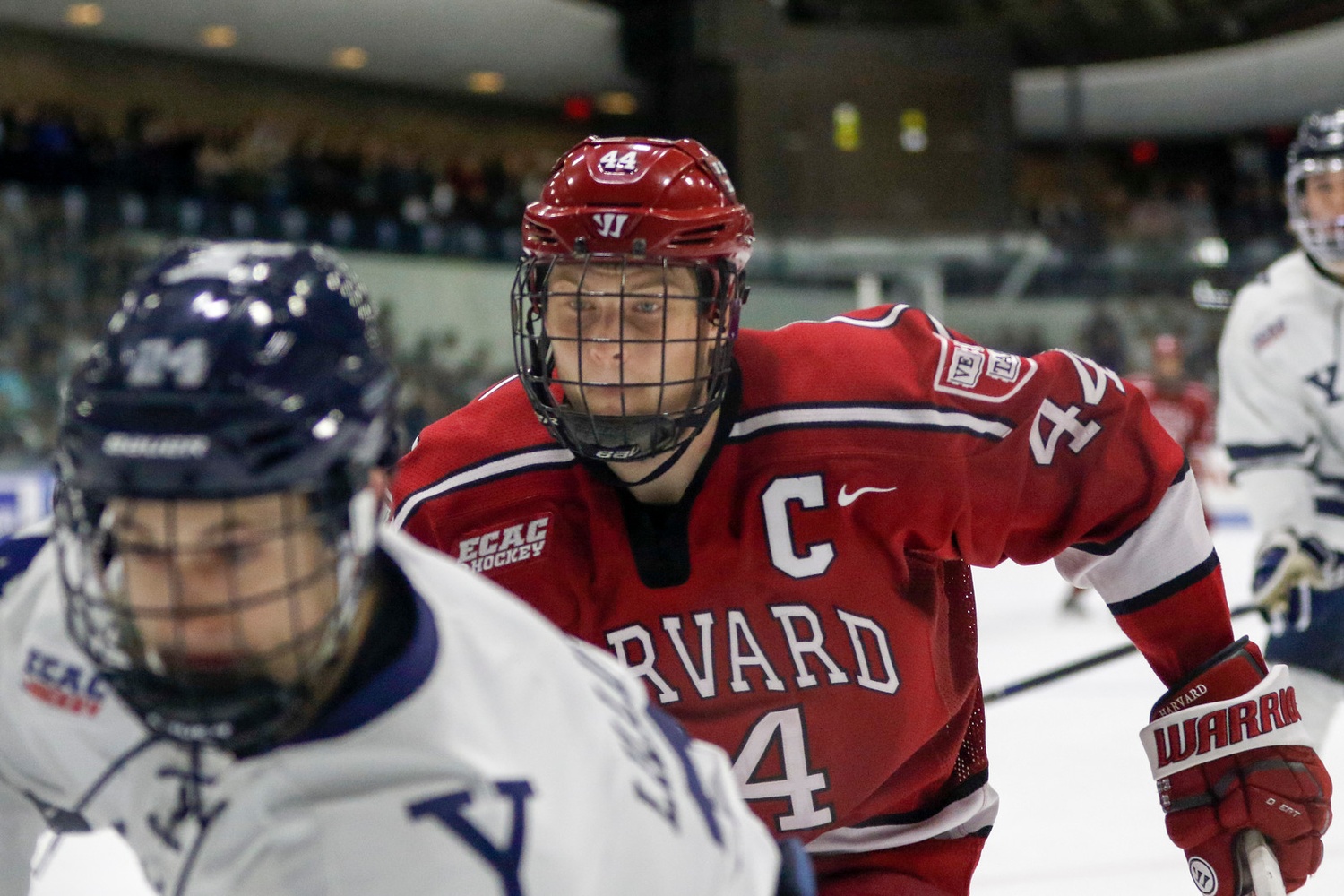 The Crimson and Bulldogs were engaged right from the opening puck drop. Harvard co-captain Michael Floodstrand (pictured) was one of many players to be involved in the physicality early on. By Timothy R. O'Meara

Both benches were charged, the crowd was at its loudest, and over the course of a single shift, the contest grew into yet another intense installment of the Harvard-Yale rivalry.

“I think I’ve played Yale nine times now, and it’s always between one or two goals,” co-captain Lewis Zerter-Gossage said. “We knew, especially playing in their rink with their atmosphere, that they were going to come out flying. I think we did a good job managing the atmosphere and playing a full 60.”

After tempers settled from the Badini hit and play resumed, sophomore forward Henry Bowlby was whistled for tripping on the ensuing shift. The Bulldogs cashed in on their powerplay chance just seconds into the man-up opportunity, courtesy of rookie blue-liner Jack St. Ivany. The tally, coming with five minutes remaining in the frame, was his first career goal.

“It’s kind of par for the course here,” coach Donato said. “It seems like the games get very physical and chippy, but all in all I thought it was just a really good competitive hockey game.”

Three minutes after the St. Ivany strike, Yale followed up with another score and had stolen momentum from the Crimson in a matter of minutes. Then, two of Harvard’s keystone players made a late-period statement, altering the complexion of the game heading into the final stanza. 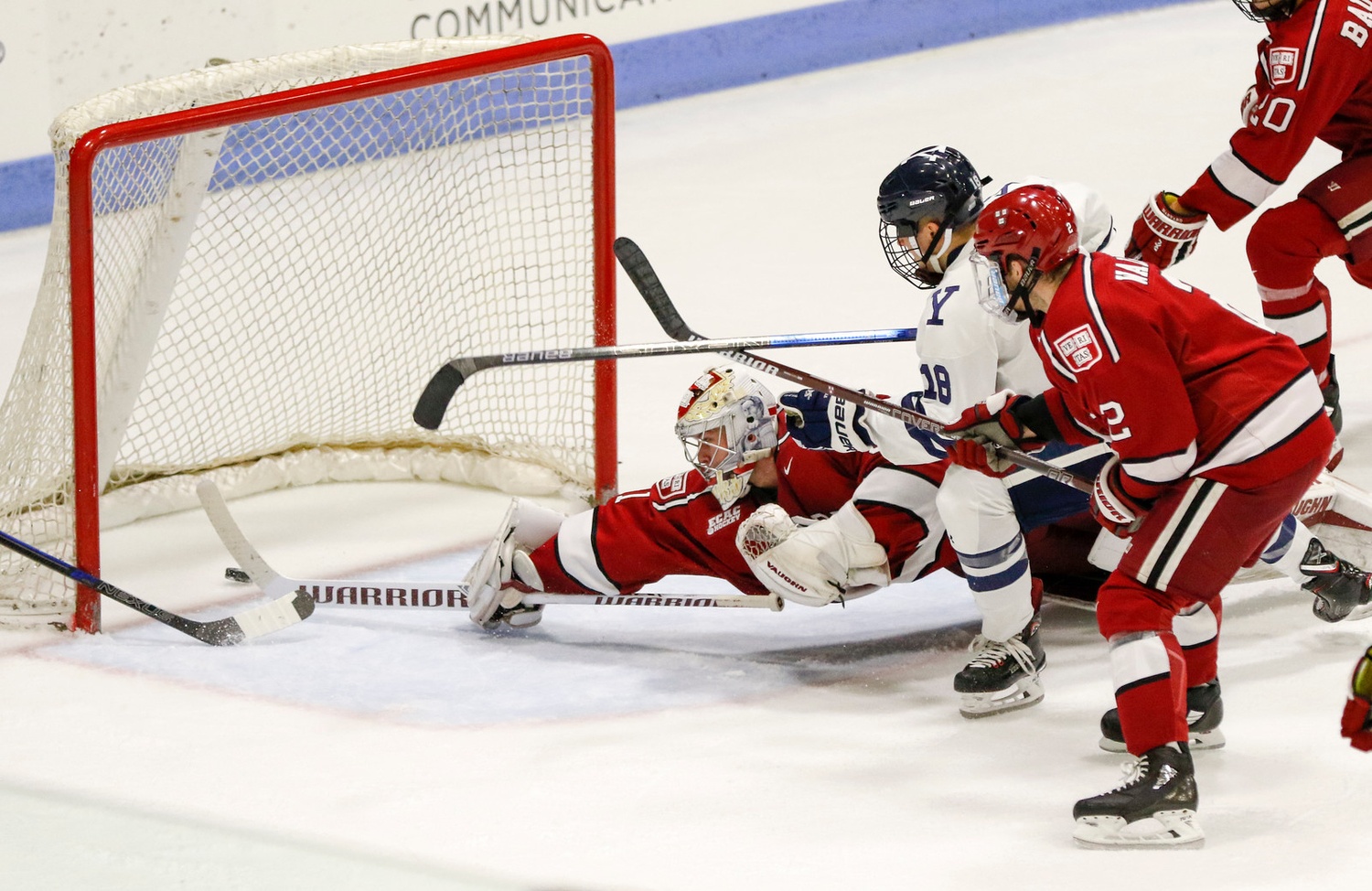 In a matter of minutes, Yale seized momentum with a pair of late-second-period goals. By Timothy R. O'Meara

In the last minute of the second frame, junior defenseman Adam Fox beat a Bulldog forechecker to a loose puck in the right corner and, without taking a single touch to corral it first, slung the biscuit to the opposite blue line, where Zerter-Gossage broke into the zone and buried the in-alone chance.

“I try as hard as I can to come up big in big moments,” Zerter-Gossage said. “That circumstance is a pretty lucky bounce, but I got a breakaway off a change…. I’m glad that I was able to bear down and score on that opportunity, and I think that it rallied the guys.”

Despite the whirlwind latter half of the middle period, the teams entered the locker rooms after 40 minutes knotted at two goals apiece, and the drama was far from over.

With just 10 minutes remaining in the tilt, Bowlby took a gruesome hit at the jut-out between his own bench and the boards. The silver lining to this dangerous play was that the Crimson headed to the powerplay.

On the man-advantage, the point-men worked the puck down to freshman forward Jack Drury, who threw a no-look backhand pass across the crease to an open Reilly Walsh. The sophomore rearguard punched in the puck, giving Harvard the 3-2 lead. 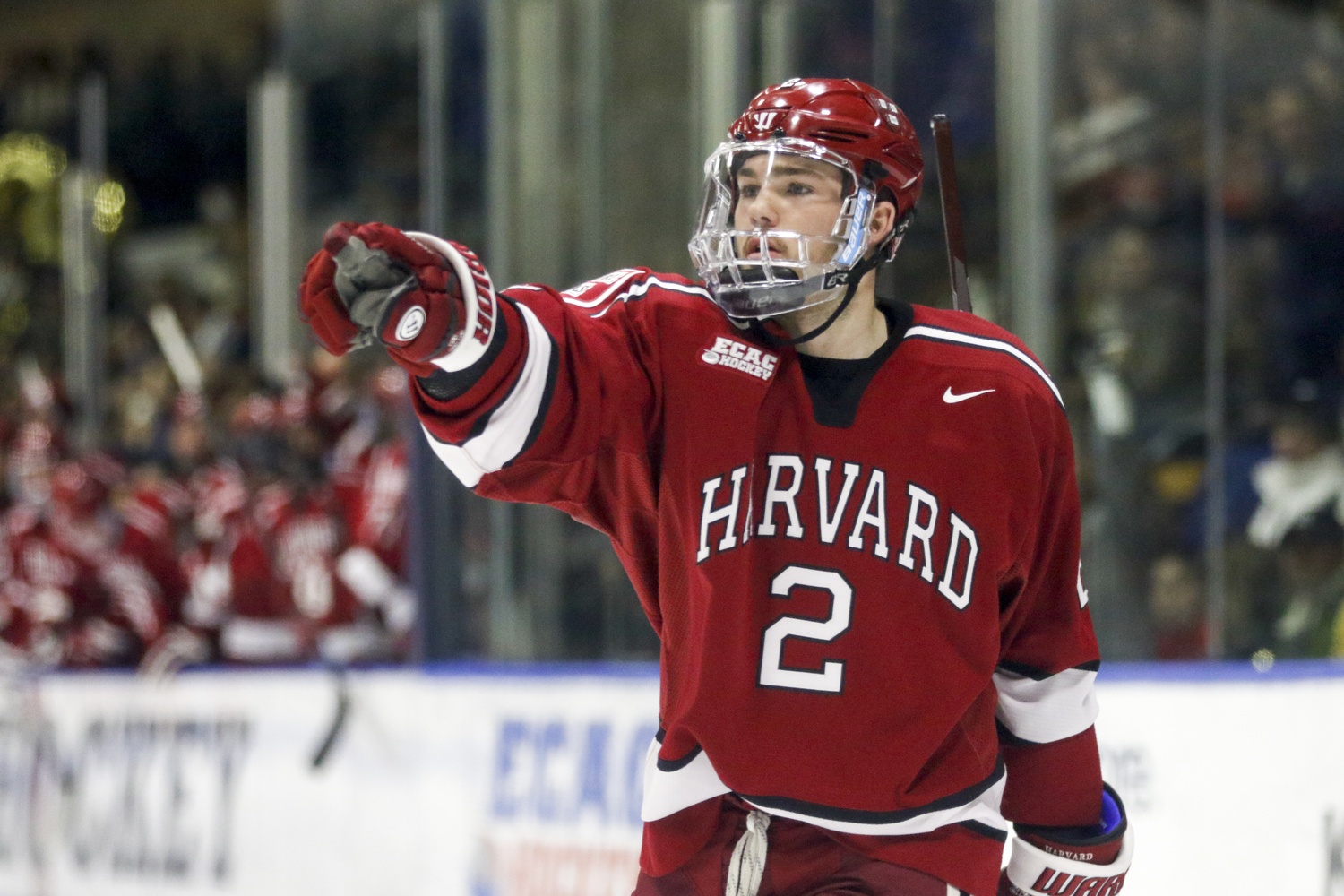 Before the bench celebration had even fully subsided, the Bulldogs earned one back. Senior Joe Snively, Yale’s most dangerous weapon up front, was the culprit. The game-tying goal was Snively’s fourth of the year, and it would prove to be the game’s final tally.

“That’s been a pretty familiar feeling so far this year,” Zerter-Gossage said. “Looking back at our first game, we battled back from opposing goals a bunch of times…. So [rapid lead changes are] nothing we haven’t seen before. It’s really frustrating because we feel like we worked really hard to get to that spot.”

For the first time this season, it was Harvard who opened the scoring. Six minutes into the second period, Fox had possession of the puck at the left point and shuffled it down to Bowlby at the half-wall. Bowlby zipped the puck into the high slot, where freshman forward Casey Dornbach sent a one-timer toward the cage. 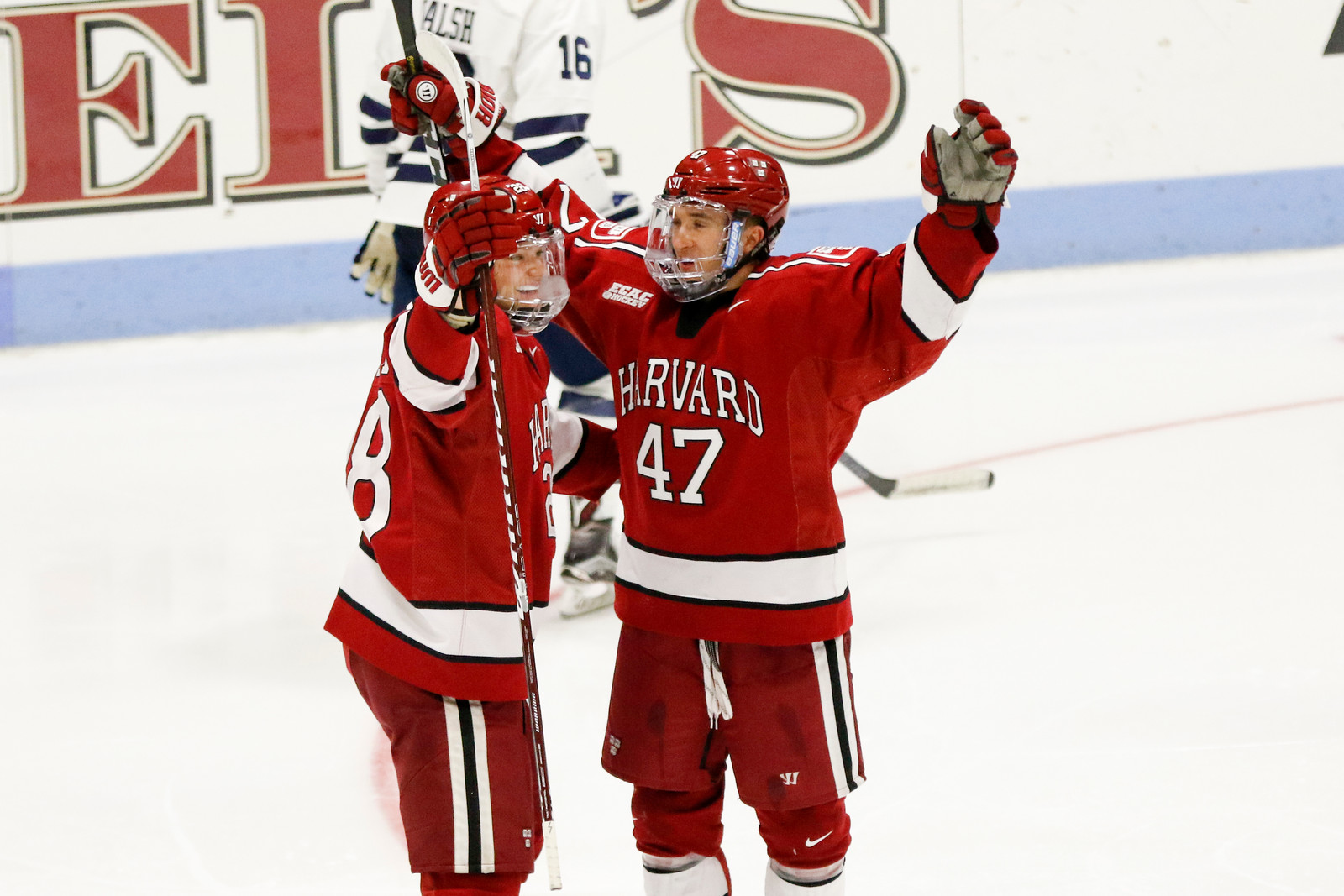 Harvard opened the scoring for the first time in this young season on Friday, courtesy of freshman Casey Dornbach. By Timothy R. O'Meara

Yale goaltender Corbin Kaczperski could not see through a screen posted by Drury, and the puck found its way to the back of the net.

Continuing a trend from the Crimson’s first three contests, the group’s underclassmen played a large role in the scoring effort, notching five of the team’s nine total points. The line of Dornbach and Bowlby centered by Drury continues to be Harvard’s most effective trio up front.

The opening frame, while it ended in a scoreless stalemate, saw high-quality chances for both squads. Harvard, leading 10-7 in shots after 20 minutes, was pleased with its performance out of the gate after wanting more from its starts to games early in the season. 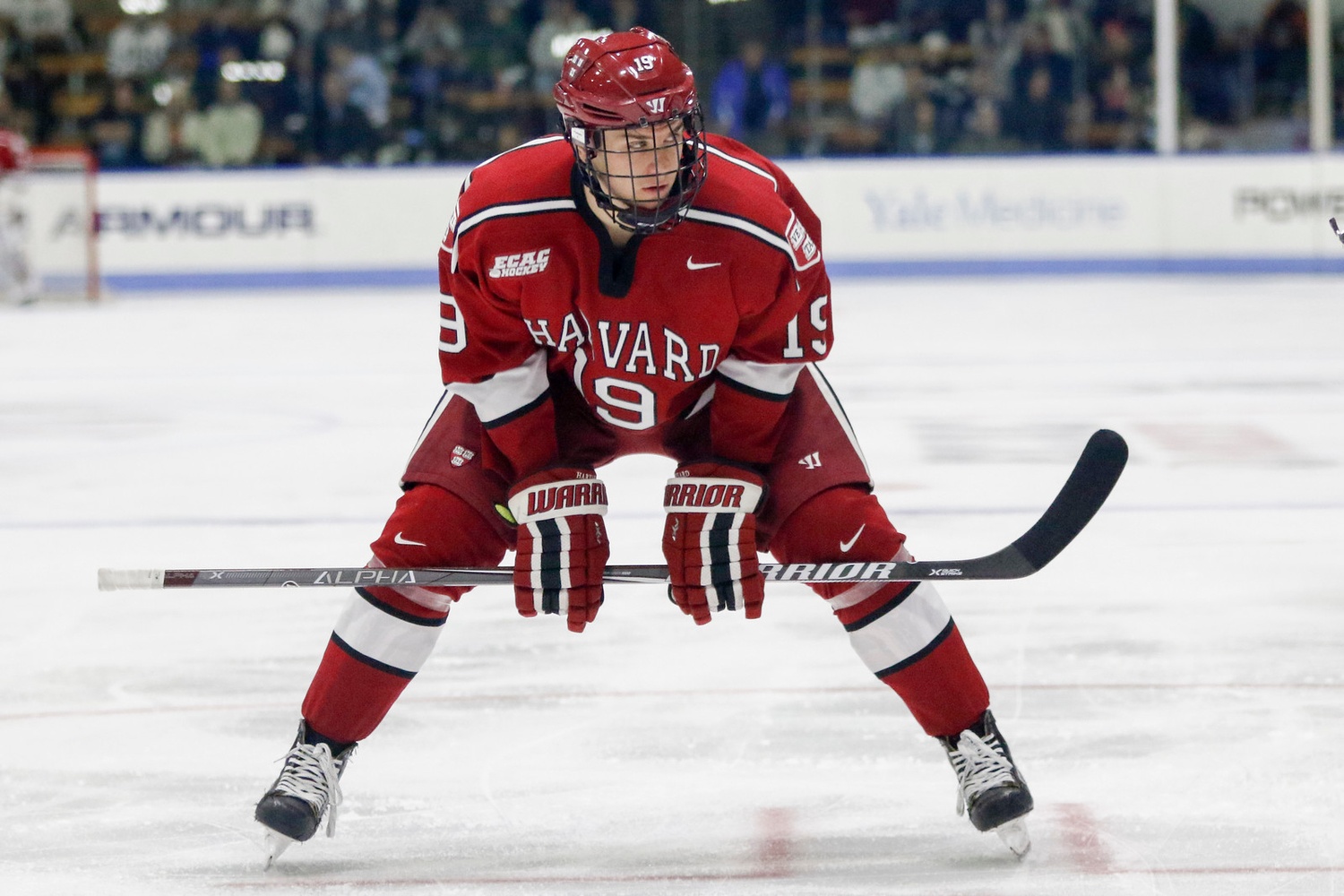 For freshmen like forward Jack Drury (pictured), Friday night's rivalry matchup at Yale was the first of many intense games against the Elis. By Timothy R. O'Meara

Between the pipes, Lackey (3 GA, .914 SV%) looked to improve upon his prior two performances in 2018-2019. After ceding a combined 11 goals in his previous pair of starts coming into Friday’s clash, the goaltender was fighting to cement his role as the team’s starter.

Both Lackey and Kaczperski stood tall at times but also allowed crucial goals. This much is to be expected, however, in such a high-event game in a raucous barn.

Friday’s latest installment of the Harvard-Yale hockey rivalry did not disappoint. As usual, the arena was booming, emotions came through, and momentum was won and lost in the span of a single shift.

The Crimson turns its attention to Brown on Saturday night, still looking for its first victory of the season.

“This was a really good growing up moment for a lot of our young guys,” coach Donato said. “We’re getting better. We’re obviously a little frustrated and disappointed with getting one point being up a goal, but it just makes tomorrow night even more important.”