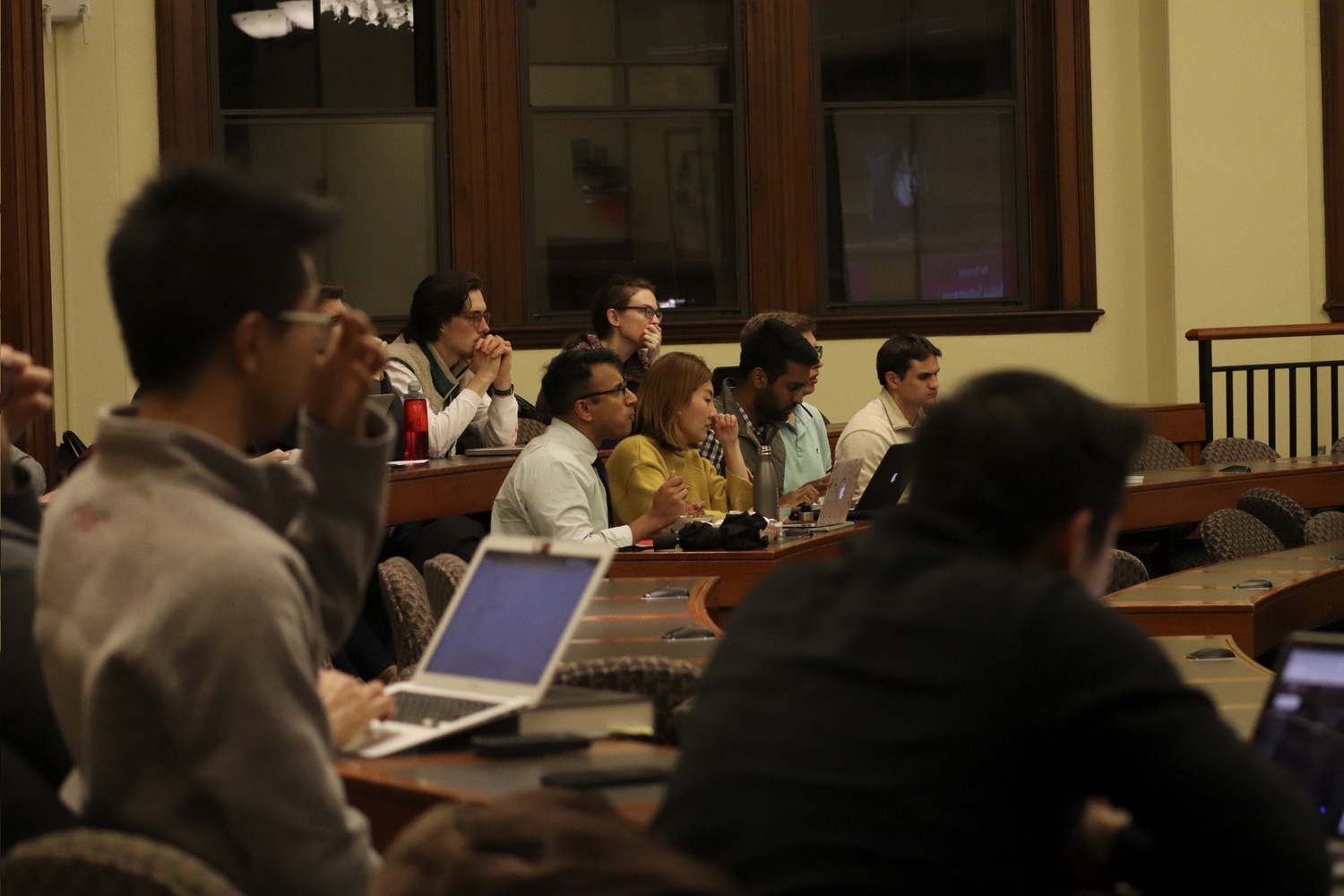 People gather in classrooms on the first floor of Austin Hall Tuesday night to watch a live stream of the final round of the Ames Competition, which was taking place a floor above. By Kathryn S. Kuhar
By Camille G. Caldera and Bridger J. Gordon, Contributing Writers

The competition, founded in 1911, tests law students’ skills in appellate brief writing and advocacy. Qualifying rounds begin in the fall of the second year of law school. Competitors must advance through semifinals and then to finals.

Students who couldn’t squeeze into the live court proceedings filled multiple overflow rooms at the Law School. Prior to the start of the trial, Sotomayor and the other judges visited the overflow rooms to briefly speak to the students gathered.

“You don’t get a chance to see us live, but nevertheless you show up to watch, and so I’m very grateful to you for your attention and your dedication,” Sotomayor said.

The case for the final round focused on the First and Second Amendments and gun control — specifically, the right to publish instructions for 3D-printing guns and the right of convicted criminals to purchase firearms.

Sotomayor remarked on the timeliness and relevance of these mock scenarios.

Teams of six students represented each side, though only two oralists on each team engaged in back-and-forth argumentation with the three presiding justices. All three justices were vocal throughout the arguments, asking questions specific to the fictional case and established Supreme Court precedents.

Students who attended the competition said they were impressed by their peers’ performance.

“I think that the people who participate in this competition are very brave, and I’m incredibly impressed by their ability to stand there in front of three very esteemed members of the judiciary and all their peers and professors and get grilled, basically,” Solange Etessami, a second-year Law student, said. “I think they did a fantastic job.”

First-year Law student Daniel M. Sieradzki said he came to the event to take a break from classes and learn from more senior students.

“It was nice to see how they argue, how they cite cases, how they reason through their arguments, and how they deal with the other side, and how they just manage the issue,” Sieradzki said.

Prior to announcing the decision, Sotomayor said the teams were “a hair apart” and lauded the finalists in the competition.

“Every time I come to one of these and I see the extraordinary performances of the students at these exercises, it fills me with hope about the future,” Sotomayor said. “It shows me that you are being trained to think and to respond in extraordinary, lawyerly, professional ways, and that you carry in your hands our future in a really good way.”