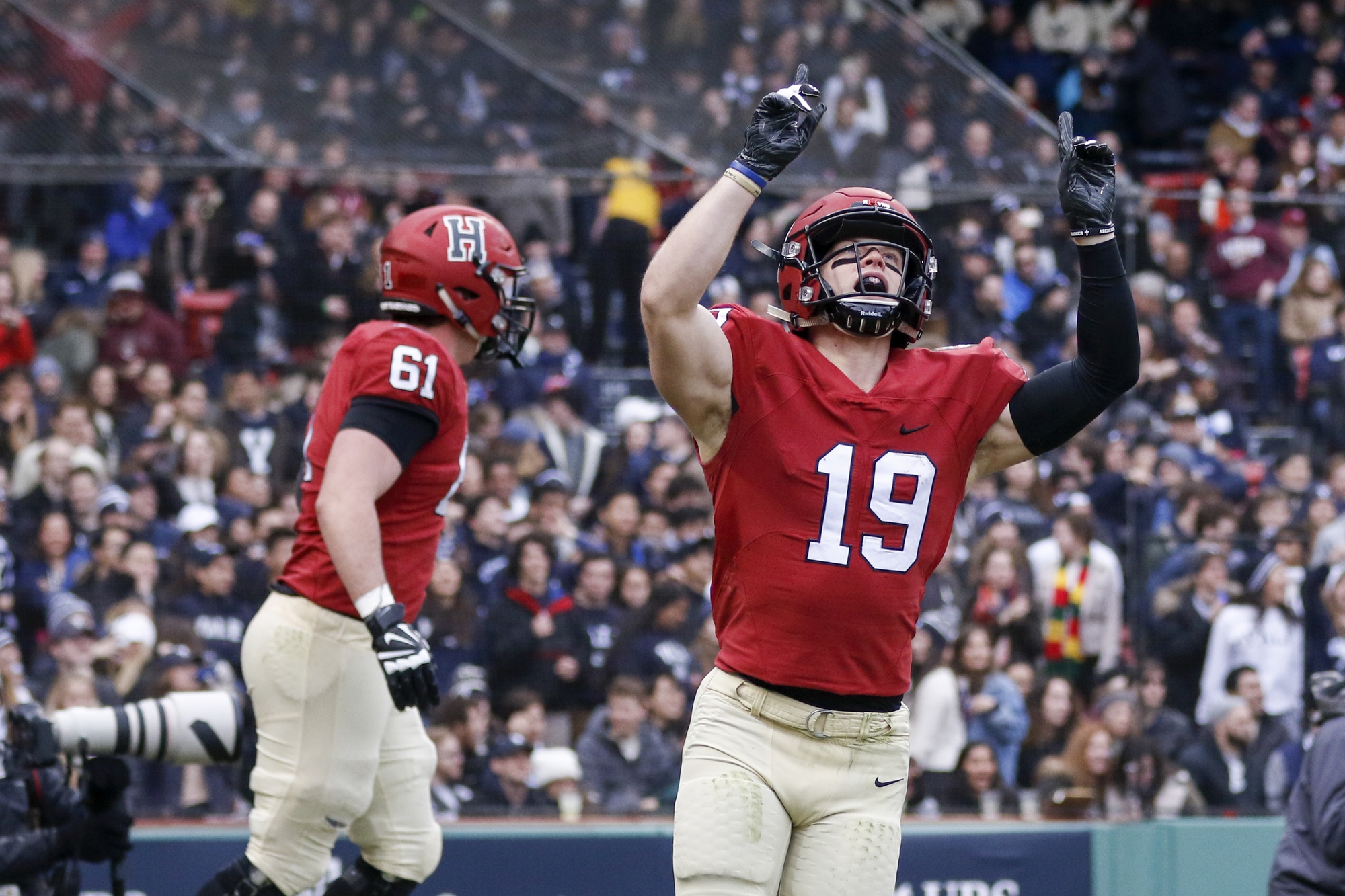 In the 135th rendition of The Game, Harvard pulled away in the fourth quarter to best perennial rival Yale, 45-27. In what was expected to be a battle between the Bulldogs’ high-powered offense and the Crimson’s staunch defense, the game began with impressive displays from both defenses but morphed into a slugfest in which Harvard prevailed and claimed third place in the conference.

The 72 combined points between the teams represented the most in a single game in the history of the Harvard–Yale rivalry. Additionally, the 605 yards of total offense by the Crimson (6-4, 4-3 Ivy) is its most ever in The Game, and its 45 points match a program record against the Bulldogs (5-5, 3-4).

“I don’t think words can describe how happy and how ecstatic our team is,” said captain and safety Zach Miller. “Being able to play in Fenway … and to go out like this, I know our seniors enjoyed it and our team really enjoyed it.”

With a field layered in temporary sod, the focus of both offenses was squarely set on the passing game. By the conclusion of the contest, the teams had combined for 640 passing yards compared to 349 on the ground.

One snap before Devin Darrington scored his second touchdown to officially put the game on ice, Stewart ran the ball out to his right. The quarterback slid feet-first near the temporary turf covering the infield to avoid incoming defensive back Miles Oldacre and went down awkwardly. Stewart was taken off the field on a stretcher. After the game, the team announced that Stewart had injured his right hip, was expected to make a full recovery, and was already being released from the hospital. 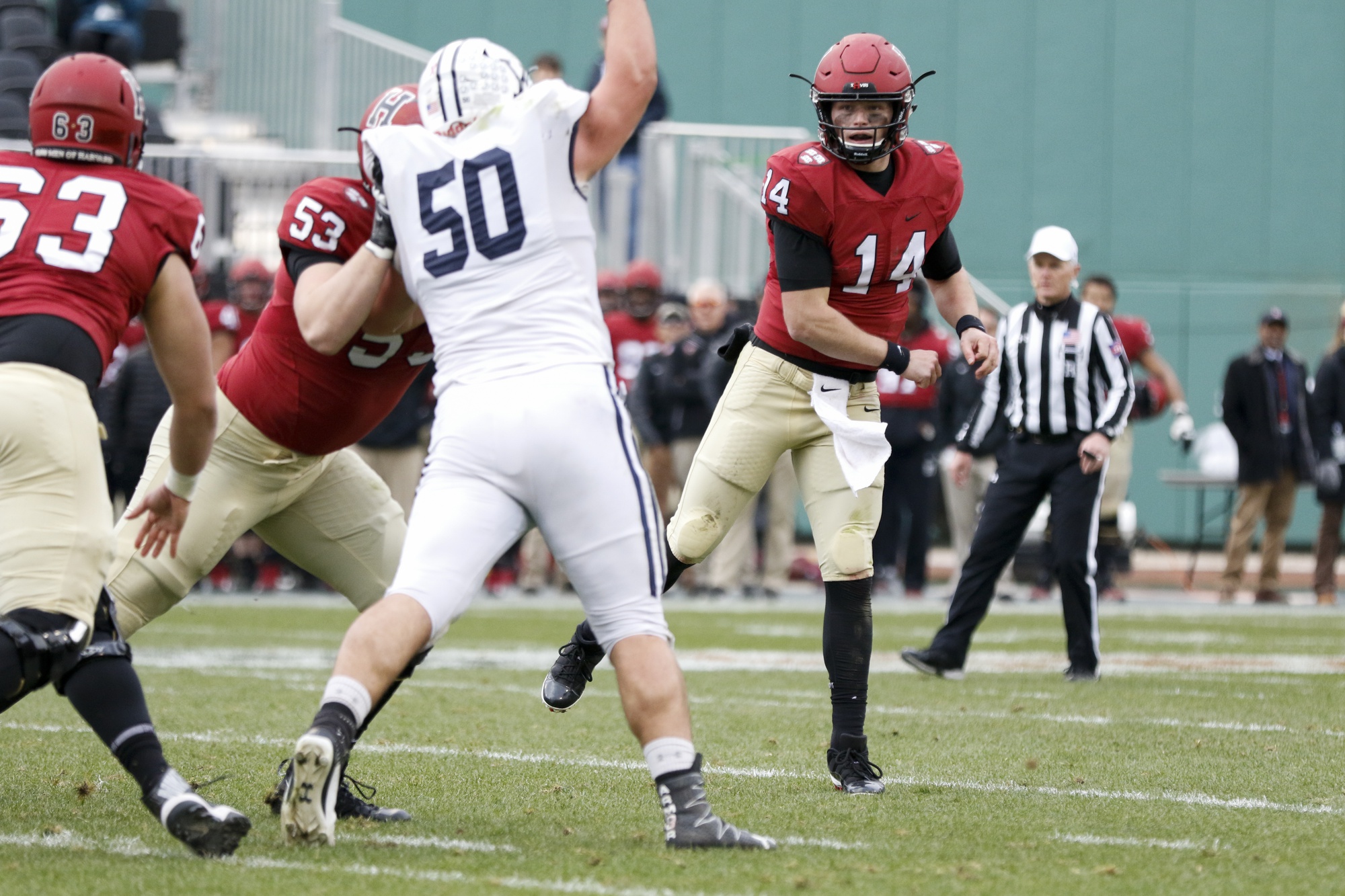 “Tom wasn’t supposed to play [due to a separate injury suffered at Penn],” Murphy said. “He didn’t take a single snap, doctors said he’ll never be able to play this weekend and he said ‘I’ll play. I’ll play.’ He hadn’t thrown a pass in a week when he warmed up in pre-game. Tommy’s had a remarkable season. He’s become a dynamic force at quarterback for us, not just in his ability to stretch the field vertically with the way he throws the ball, but just his personality and his toughness. Just heartbreaking to see his season have to end that way.”

Two significant calls by the referees resulted in significant momentum shifts in the Bulldogs’ favor. First, with a third-and-eight chance at the outset of the third quarter, it appeared as though Yale would have to settle for a field goal when Wes Ogsbury made a hard tackle on running back Zane Dudek. However, his hit was ruled to be targeting and the Bulldogs were granted a first down on Harvard’s four yard line. O’Connor punched the ball in himself to knot the game at 21.

Per college football rules, Ogsbury was ejected for his apparent helmet-to-helmet strike. At the time, he was the team’s leading tackler with six drops. The senior led the team in interceptions this season with six.

Another momentous whistle blew in the fourth quarter. In the period’s opening minutes, the Crimson appeared to bolster its 28-27 lead as Darrington broke free and marched to the end zone. However, on his way to the goal line, he turned to a Yale defender and waved his index finger — unsportsmanlike conduct, touchdown reversed, 15-yard penalty. 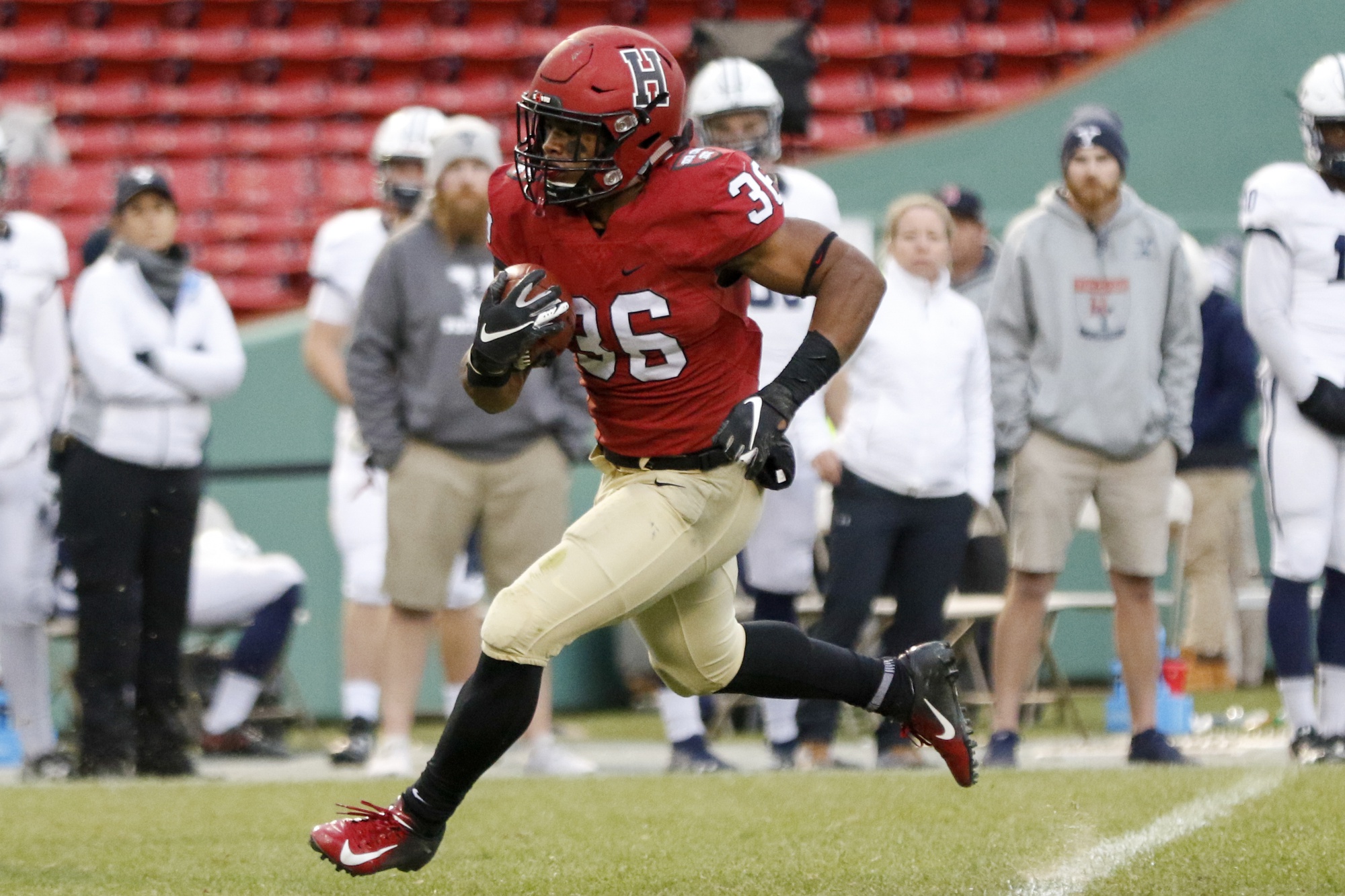 Junior Devin Darrington paced the running backs in The Game with 91 yards and two touchdowns on the ground. By Timothy R. O'Meara

“The bottom line is he was wrong,” Murphy said. “I’m just so grateful to our team that he didn’t have to learn that the absolute hard way of having to live with that for a year or however many years.”

All told, Harvard committed seven penalties for 70 yards compared to the Bulldogs’ four for 30.

The Crimson’s defense produced a three-and-out after McIntyre’s field goal and followed with a lightning-quick scoring drive to pad its four-point advantage. First, wide receiver Henry Taylor brought the punt out to the Harvard 40 on a return that saw a penalty on both sides. Then, the Crimson broke the plane, as Darrington closed out the drive with 33 rushing yards. Harvard 38, Yale 27.

After the earlier O’Connor rushing score, the Bulldogs rapidly changed the scoreboard again. On first down at his own 46, O’Connor launched the ball deep to top target JP Shohfi, who positioned Yale at the six yard line. The Crimson put up a fight in the red zone, limiting the Bulldogs to a field goal. With that, the Bulldogs snapped the exchange of three touchdowns apiece and took its first lead of the game.

Harvard quickly nullified Yale’s shortly-held lead near the end of the third period. Stewart and his offensive corps drove downfield, ultimately finding the end zone on a 15-yard completion to junior Jack Cook. Cook closed out the game with a team-high 116 receiving yards. All told, the Bulldogs led for just 3:33 of game time. 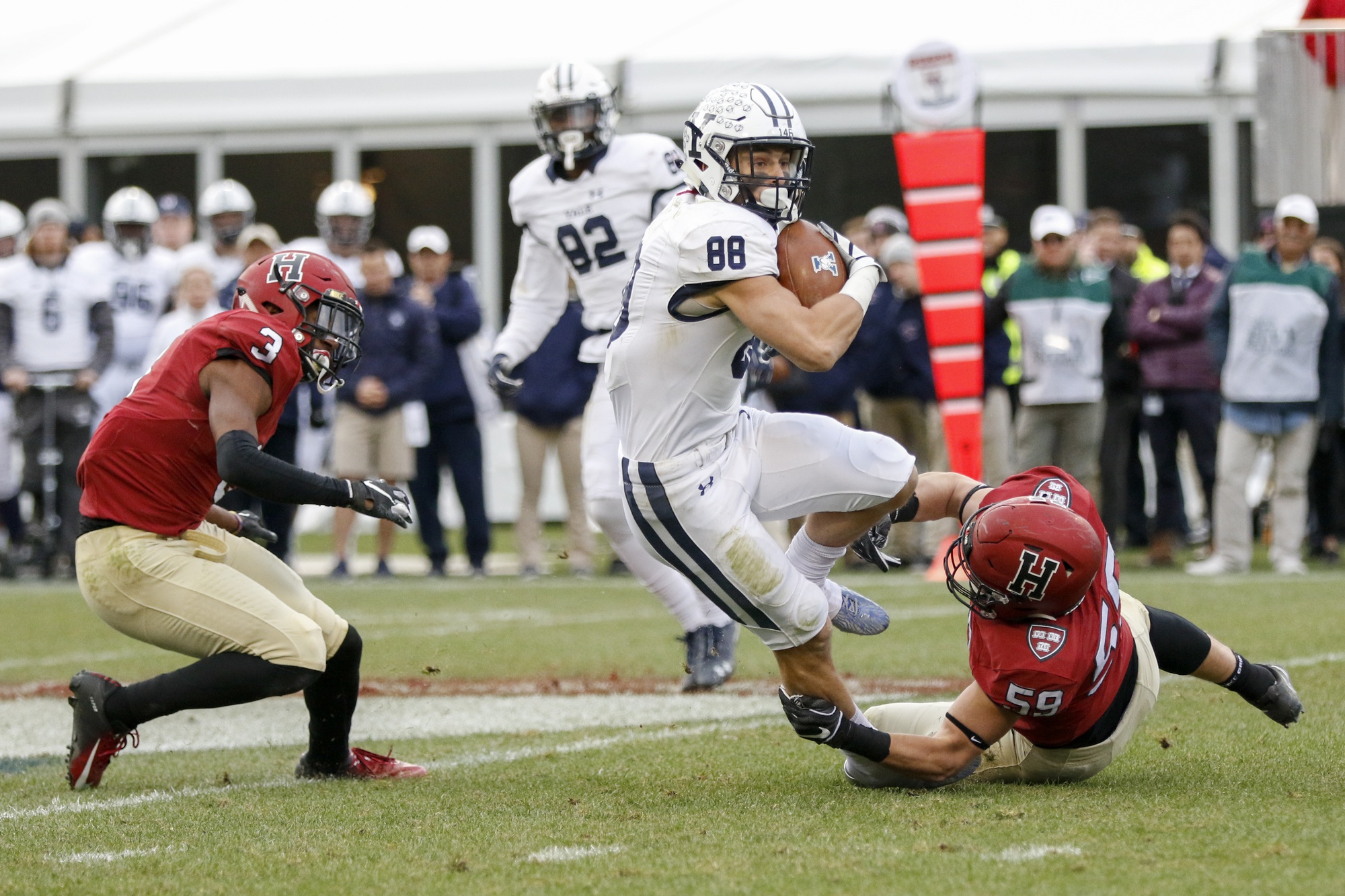 To begin the final frame, Yale came up shy of a first down at the Crimson six yard line. The Bulldogs opted to kick a field goal to creep within one, 28-27, instead of going for it on fourth and two. Key in Yale’s inability to find the end zone was a four-yard loss due to a botched handoff by O’Connor, which led to the third-down pass to Reed Klubnik that did not move the chains.

By the end of the game, the two offenses had established a trend by utilizing huge gains to move the ball downfield for a combined 989 total yards — Harvard’s average yards per play was 8.6. However, key defensive plays contributed to a close game in the early going. The first two series of the contest resulted in turnovers, as O’Connor airmailed a receiver for an interception and Stewart fumbled and lost possession.

Miller bookended the game with picks, taking advantage of O’Connor’s inaccuracy which appeared to be caused by pressure from the Crimson’s defensive front. Over his last two games to close out the 2018 campaign, O’Connor tossed six interceptions. On the other hand, Harvard’s offensive line seemed to provide Stewart with ample time to target his receivers. 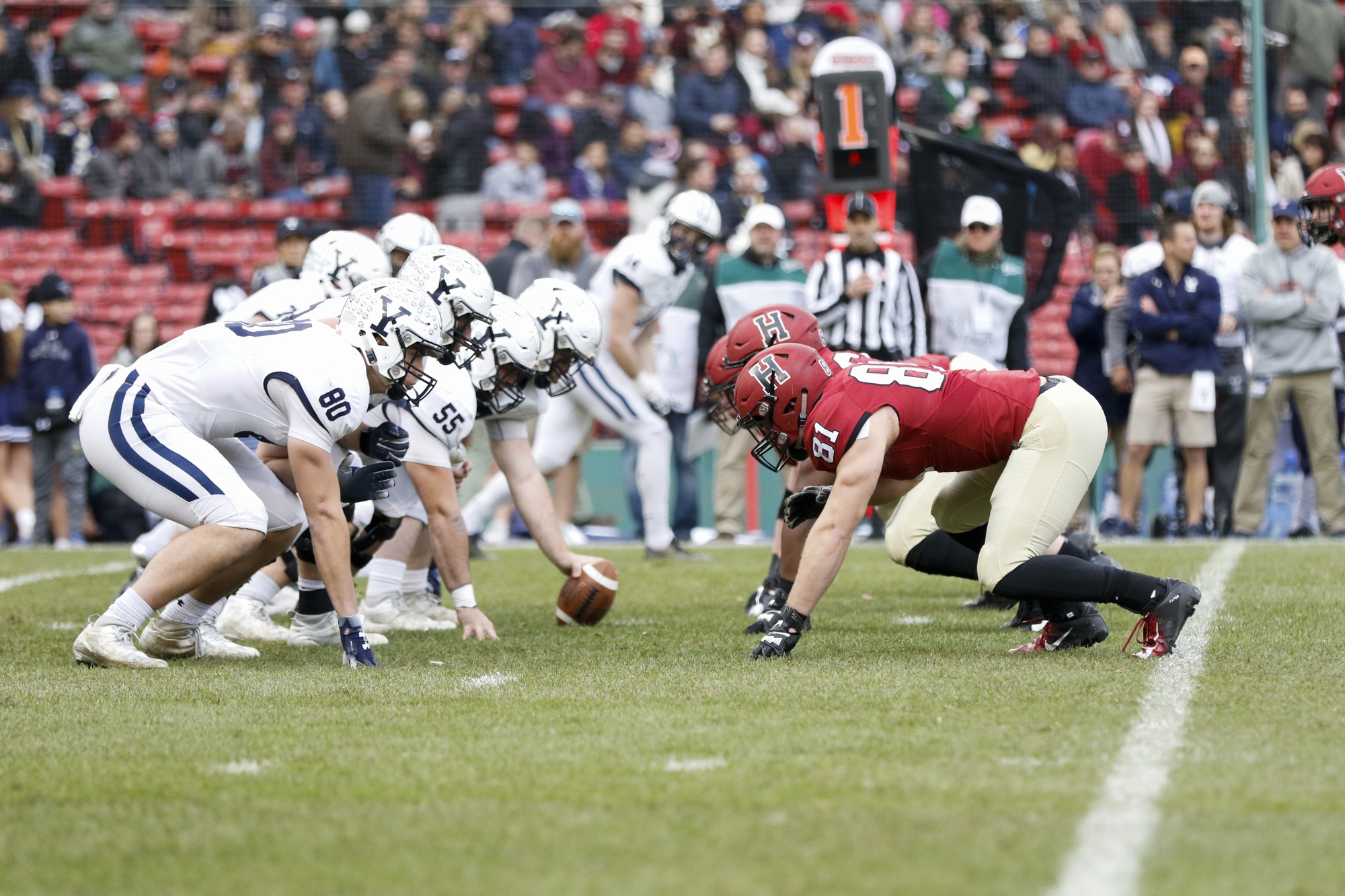 Harvard coach Tim Murphy and his players maintain that everything starts up front. By Timothy R. O'Meara

“This was trench warfare today, no question about it,” Murphy said. “I remember in our first team meeting, post Christmas in January, 6:00 a.m. in the locker room. I said ‘Fellas, we’ve got to become a bigger, stronger, tougher, more physical football team.’ We got stronger as the season wore on, mentally and physically. It really was a really great November for this particular Harvard football team.”

With under a minute left in the first half, Stewart dumped the ball off to Taylor, who dove and slammed the ball in just across the goal line. The Crimson advanced into the red zone courtesy of a deep ball hauled in by senior wide receiver Brian Dunlap, who closed out his season with a 57-yard performance. This score gave Harvard a 21-14 halftime lead.

Before Taylor broke the first-half tie, the two squads traded touchdowns in the first and early in the second — this made for what appeared to be a tightly-contested game early on, a trend that was snapped for good when the Crimson dropped 17 points in the fourth quarter.

Bolstered by a Jon Sot punt downed at the Bulldogs’ three yard line at the very end of the opening stanza, Harvard managed to force Yale’s punt unit onto the field. Then, Adams took a handoff and broke off a 62-yard touchdown run on the drive’s first play — the second-longest rush of the season for a Crimson ballcarrier — to put Harvard up, 14-7.

Though Adams is listed as a wideout, his role in this game was to run jet sweeps out of the backfield, several times taking handoffs from B.J. Watson in the backfield. Adams totaled 98 rushing yards, leading the team in that metric.

After the Bulldogs’ first score in the first quarter, the Crimson defense shut down Yale’s attack. Its next three drives resulted in a trio of punts and a total of just 37 yards gained. However, its next attempt tied the game up once more. Starting on their own 41, the Bulldogs used a 33-yard gain by Dudek to set up their second touchdown. This time, O’Connor tossed a bullet to Shohfi for a toe-tap score. Shohfi, Yale’s top target, racked up 127 receiving yards. 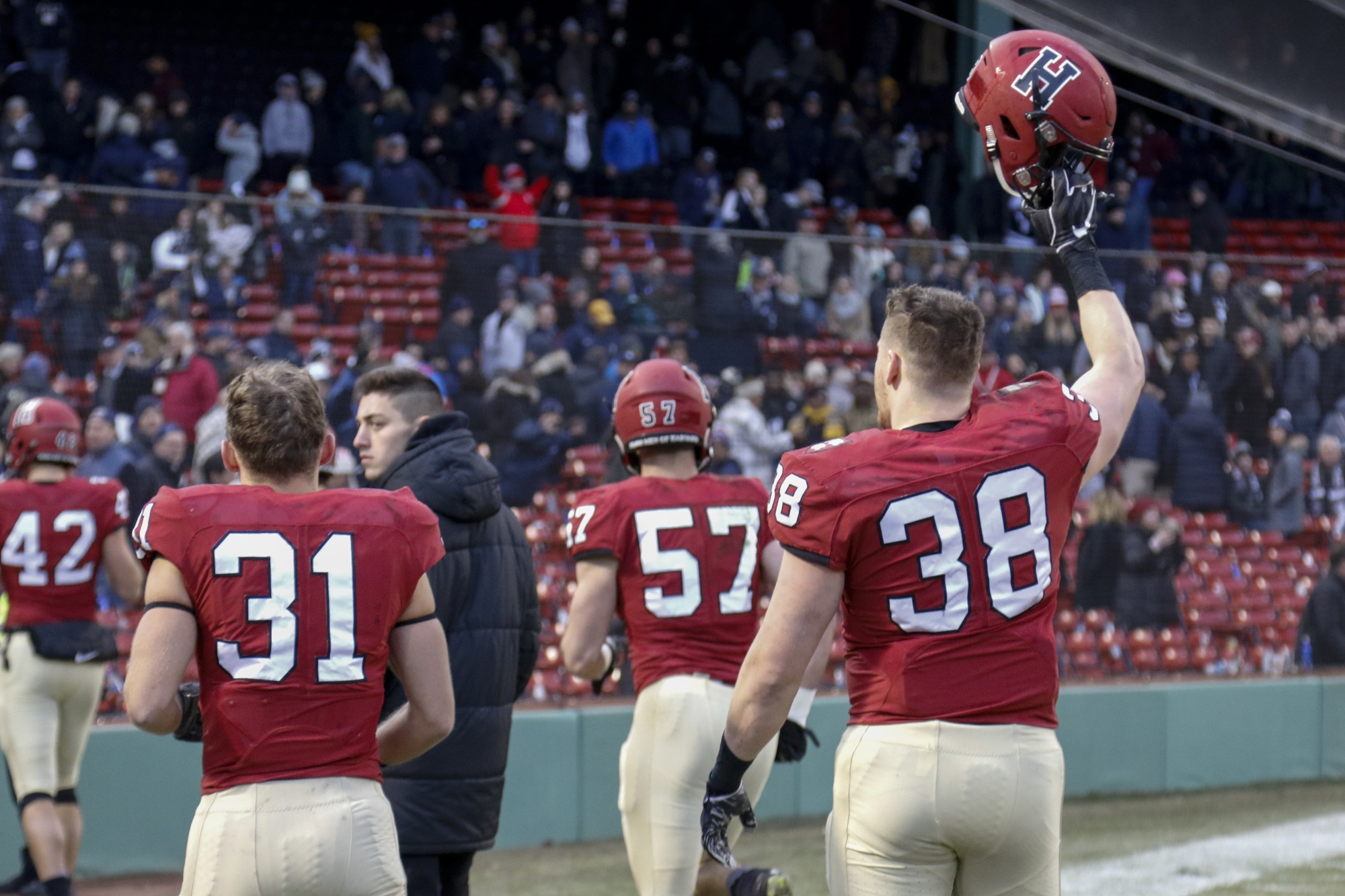 At the end of his final game in a Harvard uniform, senior defensive lineman Alex White saluted the crowd. By Timothy R. O'Meara

Dudek, a surprise participant in the game after missing significant time in 2018 with injuries, posted 66 yards on 10 carries as well as 38 receiving yards.

To open its second drive of the contest, Harvard lost two yards on two plays before picking up a gain of 38 as Stewart passed from the left hash to the right sideline to a sliding Cook. Six plays later, Stewart was flushed from the pocket but targeted Taylor, who came down with the game’s first score. Once the Crimson knelt the ball to close out its victory, Taylor had accumulated 41 yards and two touchdowns, his only two receptions of the afternoon.

The Bulldogs fought right back on a drive that took 3:17 and spanned 76 yards. Heavily targeting wide receiver Jaylan Sandifer and even taking the ball himself for a first down, O’Connor guided Yale downfield and handed off to running back Alan Lamar for a three-yard touchdown sprint.

“When I look back at this game, I’ll just think of it as an all around team effort,” said senior offensive lineman Tim O’Brien. “The defense, they got us the ball on the interceptions, on the third-down stops. It wasn’t just the offense that was making plays out there and I’ll just remember the team coming together as one.”