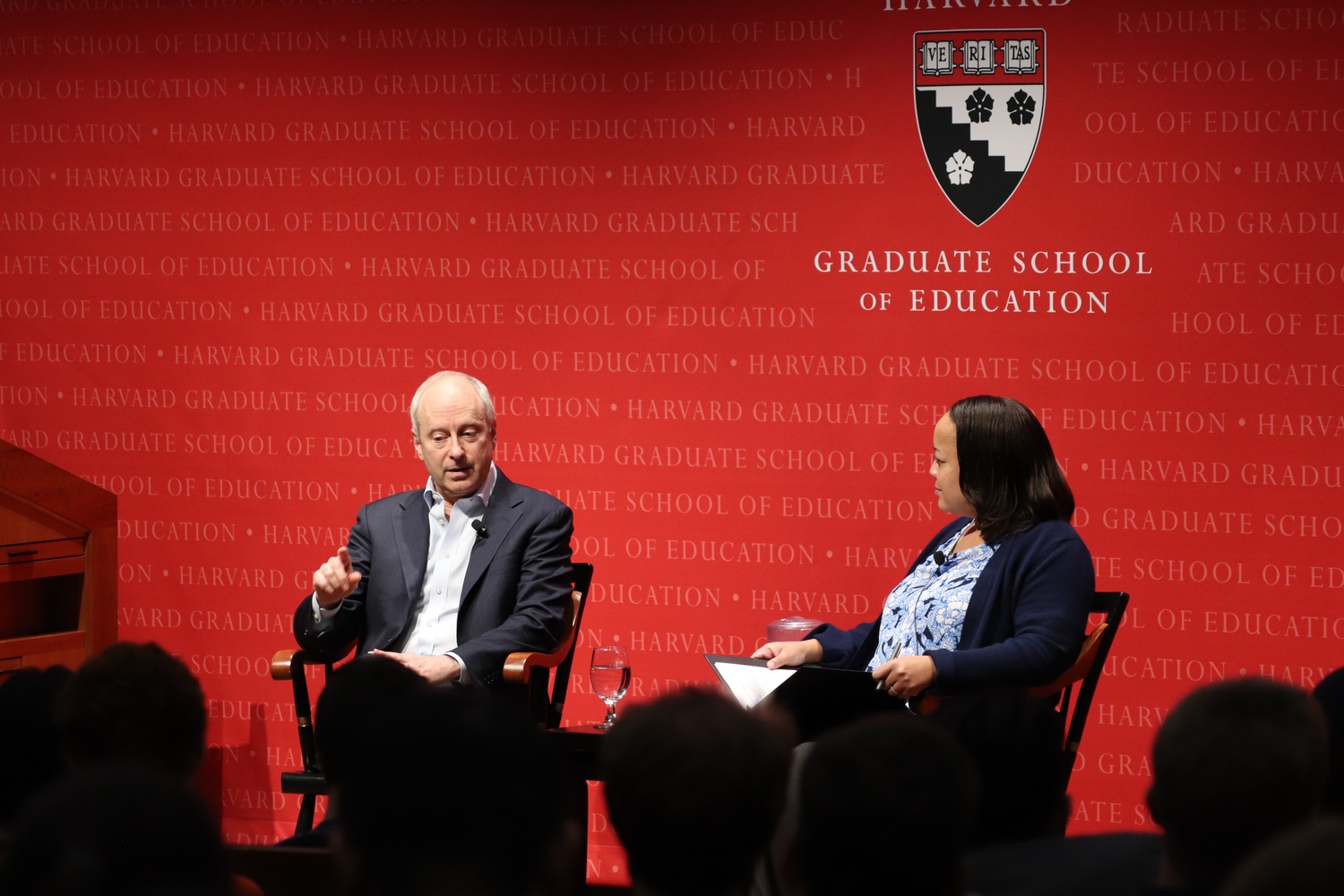 Sandel, a pioneer of and advocate for “massive open online courses,” highlighted the importance of creating a global community of respectful discourse through education. Bridget Terry Long, the dean of the Graduate School of Education and a professor of education and economics, moderated the conversation. The discussion formed part of the Askwith Forums, a public lecture series currently taking place at the Harvard School of Education.

In the discussion, Sandel said his goal is “to take the distance out of distance learning” and to replicate an engaging classroom experience for online learners.

The event opened with a video of a class he facilitated for the British Broadcasting Corporation in which 60 people from around the world vido-called in to debate the legality of hate speech.

One woman from Somalia advocated for outlawing hate speech and was backed by a Canadian, while another from the Netherlands found support from a South Korean in urging unimpeded free speech. Though people hailed from different countries, cultures, and backgrounds, each came ready to share and exchange ideas with an open mind.

“Once it became clear that lots of people in lots of places are interested in watching [these courses], I wanted to see if we could use new technology to move beyond access to participation to enable people who are interested in these questions to talk back, to give voice to their views and opinions,” Sandel said. “The project is to take the distance out of distance learning.”

Despite increased access to online civics courses in recent years, Sandel criticized institutions of higher education for their general approach to promoting civic education and engagement.

“We have not done enough to equip students to be citizens,” Sandel said. 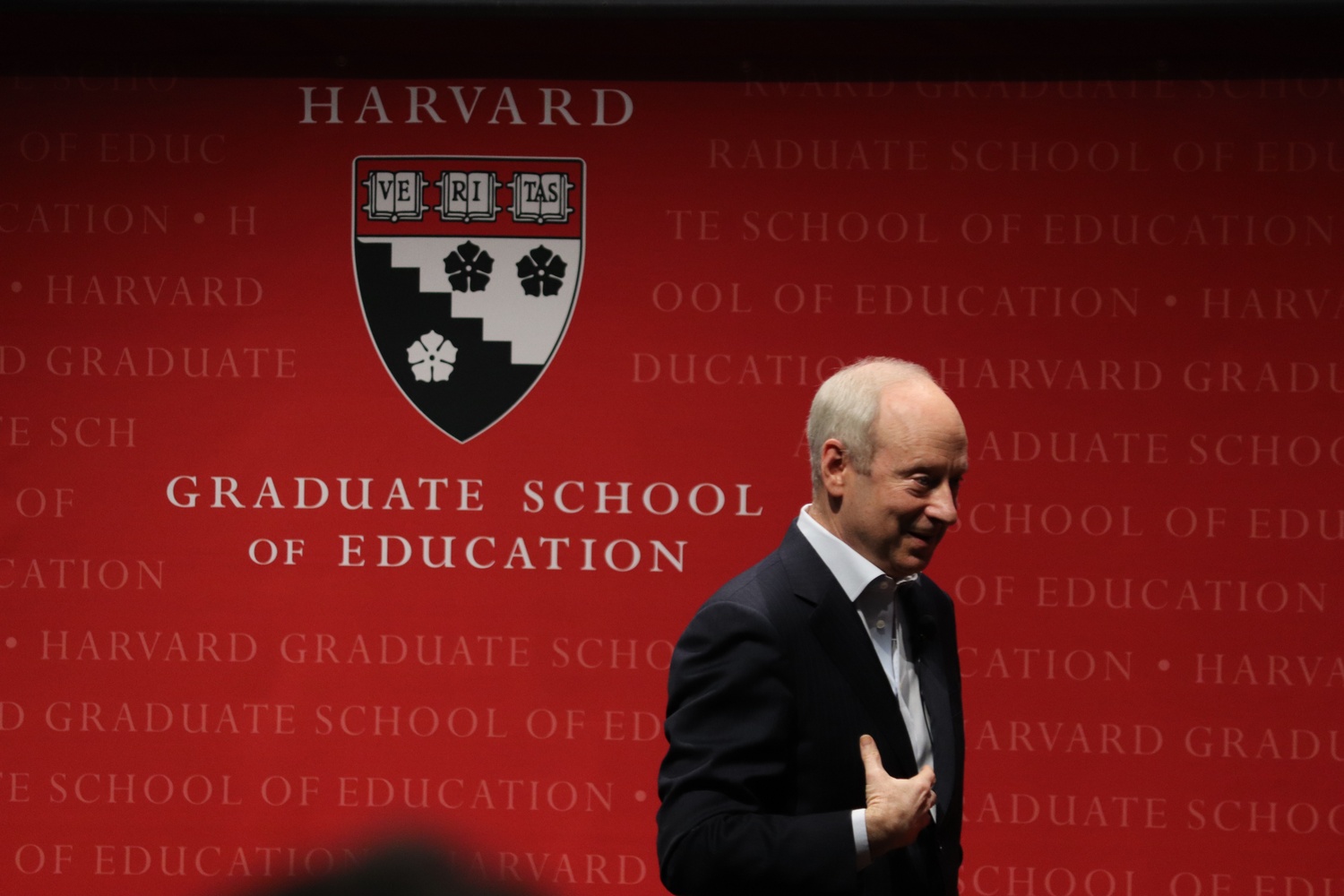 Michael J. Sandel, a Professor of Government, speaks about bridging the gap between "the classroom and the city" during a forum at the Graduate school of Education Thursday evening. By Kathryn S. Kuhar
Advertisement

He said the classes that are available, though, have a huge impact on people’s lives.

On a recent trip to Brazil, Sandel met Reginaldo, a middle-aged favela resident. After learning to read at age 25, Sandel said Reginaldo fell in love with philosophy. Through these online lectures, Reginaldo was able to formalize this knowledge and shares lessons from Platonic dialogues and the writings of Socrates with his friends and neighbors, Sandel said.

Sandel highlighted his College course “Justice” — Harvard’s first-ever made available for free online — as a blueprint for private institutions hoping to foster greater civic engagement with the world.

“Higher education can be a public good, not just a private privilege,” Sandel said, listing several examples of people who have applied things they learned in his course to their daily lives.

Audience members leaned forward in their seats and took notes as they listened to the discussion, which touched on a range of issues including education, diversity, dating, social media, and the midterm elections.

“His work feels more relevant than ever,” Long said as she introduced Sandel.

Natasha L. Raisch, a student at the Graduate School of Education who attended the forum, said the timeliness of Sandel’s work made the forum more engaging.

“I really liked that it’s super relevant to what we are living today and how he related it back to trends in education like technology and engaging globally,” Raisch said.

Annelisa K. Lee ’22, another attendee, said she appreciated the chance to explore a new topic through the discussion.

“It’s pretty enjoyable to come to things like this that are about things that you don’t really know anything about, and just learn a little bit about what people are talking about,” she said.

Tags
On CampusEventsGrad School of Education