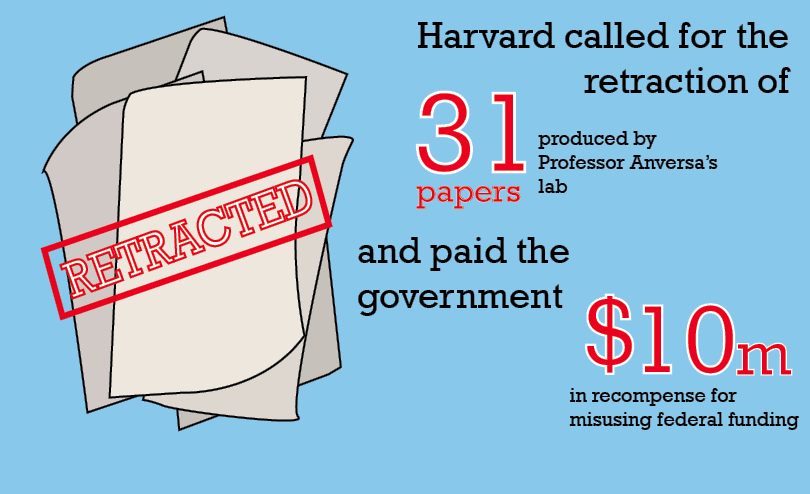 Harvard researchers are far from immune to retractions, according to new data published online last month.

In October, Retraction Watch — a blog “tracking retractions as a window into the scientific process,” according to its website — published the largest, most exhaustive searchable database of retractions issued by scientific research publications to date.

The database includes over 18,000 listings dating as far back as the 1970s — and details how at least half a dozen Harvard affiliates saw their findings rescinded in the past decade or so.

Prominently featured in the database are a series of scandals involving Piero Anversa, a renowned heart researcher formerly of Harvard Medical School and Brigham and Women’s Hospital.

This October, Harvard called for the retraction of 31 of Anversa’s articles — which posited that damaged heart muscle could be regenerated with stem cells — after other laboratories failed to reproduce his findings. Officials at HMS and Brigham and Women’s Hospital ultimately concluded that Anversa had fabricated or falsified data.

Such a large-scale retraction recommendation is rare, even given the Anversa laboratory’s rocky track record. In 2014, Circulation retracted a 2012 study by the laboratory on charges it had corrupted data, prompting Harvard to launch an investigation. A few days later, prestigious medical journal the Lancet issued an “Expression of Concern” over an even more famous paper co-authored by Anversa. That paper had been cited 270 times and demonstrated “promise for treatment of heart failure,” according to the Lancet’s initial press release.

Anversa sued Harvard Medical School and Brigham and Women’s Hospital for the ongoing investigation into his research and subsequently left the University to take a new post in Switzerland. In 2016, Anversa lost the appeal — and, a year later, Harvard was forced to pay the United States government $10 million to settle charges that the Anversa laboratory had fraudulently obtained funding from the National Institutes of Health.

A less-publicized set of retractions came from yet another researcher at HMS and Brigham and Women’s Hospital: assistant professor of medicine Weishu Y. Weiser. In 1995, the Public Health Service’s Office of Research Integrity found that Weiser had falsified data in two research papers she produced on macrophages, a type of white blood cell.

The Journal of Immunology, which published the studies, claimed they never received the letter of retraction Weiser had agreed to send. It retracted both papers in 2012 — 17 years (and about 70 citations of each paper) after the initial finding of falsification.

The database reveals that research papers authored by several other Harvard affiliates earned retractions for iffy ethics or methodology.

In July, Nature retracted a highly cited 2011 paper by cancer biologist Sam W. Lee — formerly affiliated with the Broad Institute of Harvard and MIT — after several researchers raised concerns over the treatment of animals involved in the study. Figures showing mice with massive tumors suggested the animals may have “experienced more pain and suffering than originally allowed for,” according to a 2015 correction notice.

Last December, Genetics Professor and 2009 Nobel Laureate Jack W. Szostak retracted a 2016 paper on the origins of life published in Nature Chemistry after subsequent experiments conducted by members of his laboratory failed to reproduce the 2016 findings. A research fellow in the laboratory concluded they had misinterpreted the initial data — a mistake Szostak told Retraction Watch was “definitely embarrassing,” but one he was relieved his own laboratory identified.

Last March, HMS Professor C. Ronald Kahn retracted a 2003 paper published in The Journal of Biological Chemistry — the third paper he retracted in the span of a year — citing the omission of key data and the manipulation of multiple figures.

A previous version of this article misidentified the gender of Weishu Y. Weiser. It has been updated.