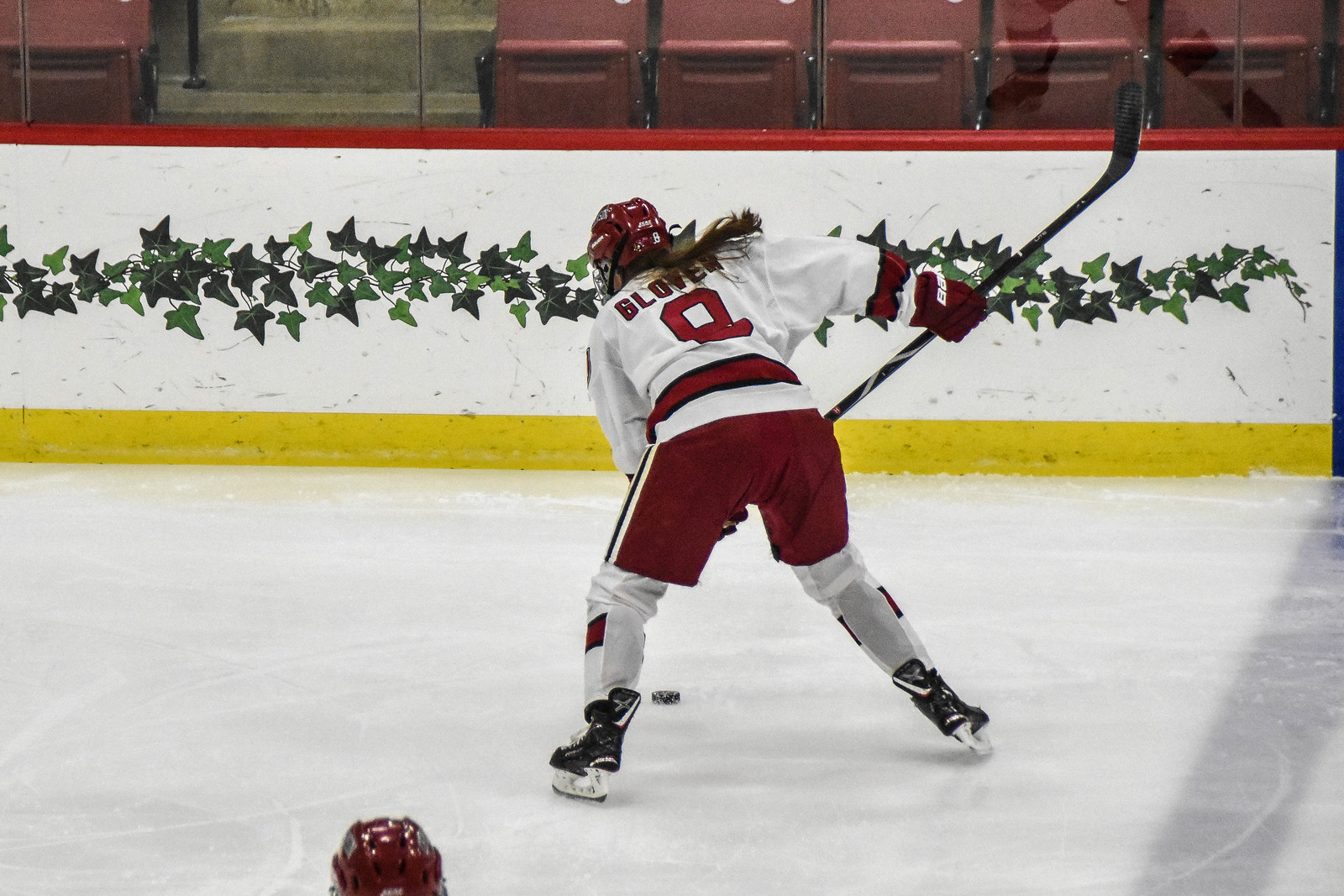 Sophomore defender Kate Glover winds up for a shot against UMass. By Quinn G. Perini
By Mohamed Ahmed, Contributing Writer

Coming off a home victory against Union, the Harvard women’s ice hockey team welcomed Maine to the Bright-Landry Hockey Center, with the home team eventually falling short. Following its loss against the Black Bears, the Crimson traveled to Durham, N.H, to face the University of New Hampshire. A nail-biting game eventually went to overtime, but neither team could capitalize, resulting in a tie at two goals apiece.

After its loss to Maine, Harvard (4-6-2, 3-3-1 ECAC) looked to finish the semester on a high note with a victory at New Hampshire (6-9-4, 4-8-1 Hockey East). However, neither team could separate itself during an overtime period, resulting in a 2-2 tie. The visitors were led by goals from two first-year players, an encouraging sign of things to come.

Early in the first period, the Crimson was able to take the lead thanks to freshman defender Maryna Macdonald. With a little under three minutes played, sophomore defender Kate Glover managed to steal the puck from a Wildcat defender and passed it to Macdonald, who then sent the puck flying toward the Wildcats’ net, putting Harvard on the scoreboard.

“We struck first,” junior defender Ali Peper said. “We had a freshman get her first goal, which is always huge. That was great for getting us out and getting us together in the beginning of the game.”

In the third period, a frightful moment occurred involving Macdonald. Along the boards, Macdonald collided with a Wildcat skater, resulting in Macdonald being taken out of the game on a stretcher.

“She is doing alright right now,” Peper said. “[Macdonald] did not end up finishing the game and kind of a tough moment for the team to see someone go down like that.”

Down by one, the Wildcats found the back of the Crimson net thanks to another score by McManus. With the score tied at two apiece at the end of regulation play, the match went into overtime.

“The mentality going into overtime is what can we do to get the job done,” said captain and forward Kate Hallett. “We only have five minutes to lay it all out on the line.”

During overtime, neither team could pull out a victory, resulting in the Crimson’s second tie of the season. Harvard’s next game is on Jan 4., at home against the Princeton Tigers.

Facing the Maine Black Bears, Harvard looked to add another tally to their win column. However, after sixty minutes of play, the Crimson were unable to generate a victory, falling 2-1 at home.

During the first period, both teams were unable to score, thanks to a substantial show of defensive effort.

“We are trying to be resilient as we can in the defensive zone,” Peper said. “Playing [defense] is about hard work and moving your feet.”

In the second period, junior forward Tereza Vanisova snuck the puck past the Crimson goaltender, giving Maine a one point lead. The Black Bears would score again in the third period thanks to a breakaway goal by junior forward Vendula Pribylova, increasing Maine’s lead to two goals.

“A 2-0 deficit is a hard lead to hold being Maine,” Hallett said. “We knew that and we wanted to keep piling on the pressure towards their net.”

Harvard eventually found the Black Bears’ net late in the third period thanks to a late power play goal by sophomore forward Keely Moy. Shortly after sophomore forward Brooke Jovanovich’s shot rebounded off of the Maine goalie, Moy rushed forward in front of the net, dived towards the loose puck and scored, cutting Maine’s lead in half.

Looking to tie up the game, Harvard pulled its goalie in favor of another attacking skater. However, even with the extra offensive power present, the Crimson was unable to capitalize and fell to Maine at home.