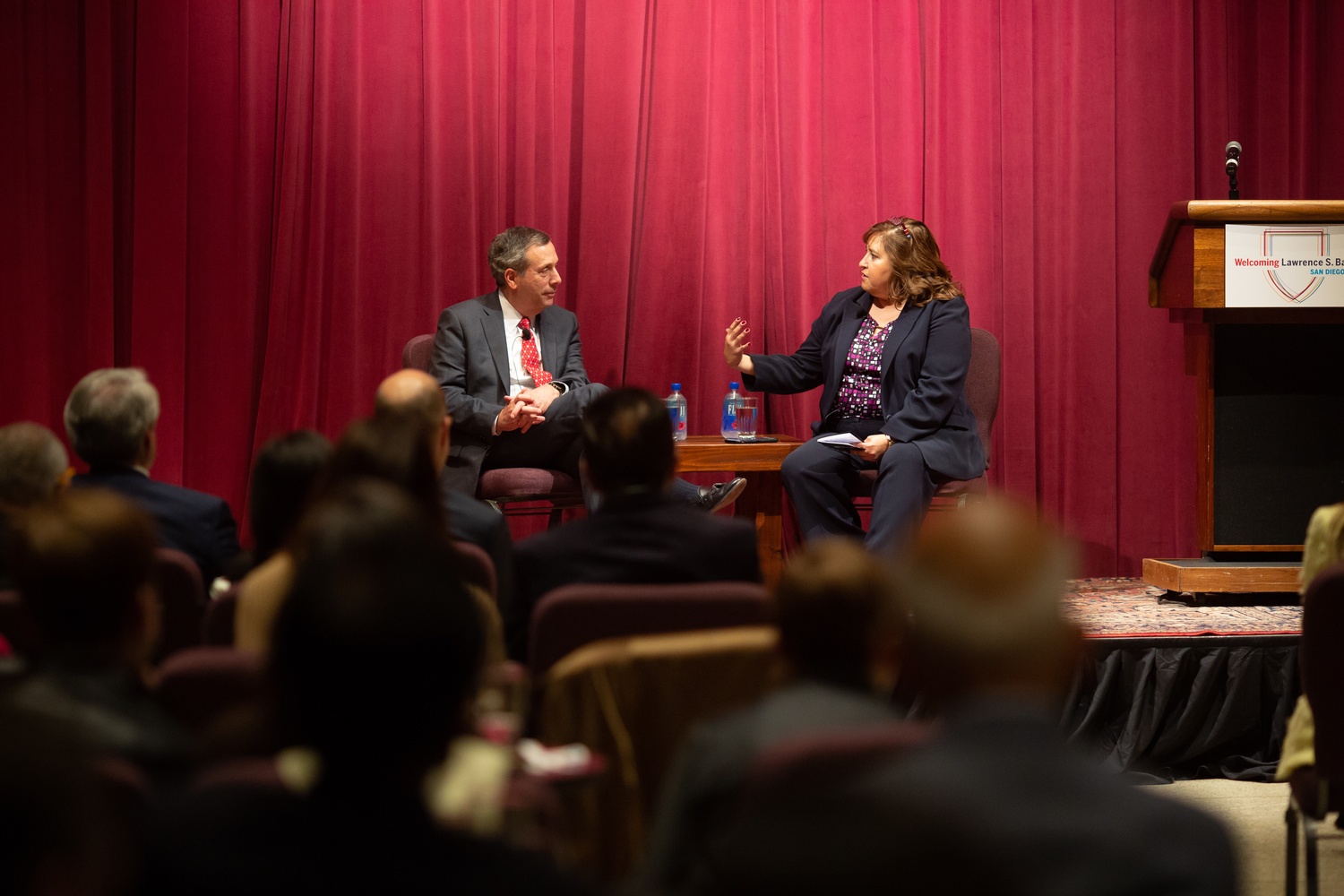 Yvonne Campos, a law school alum, mediates a discussion with President Bacow at the Harvard Alumni event at the San Diego Museum of Art. By Courtesy of Spark Photography
By Aidan F. Ryan, Crimson Staff Writer

University President Lawrence S. Bacow traveled to San Diego last week as part of a series of trips he has taken to make the case for Harvard’s relevance to people beyond Cambridge.

During the trip, Bacow spoke at a local gathering of alumni Thursday and visited the Health Science High School and Middle College on Friday.

At the event for alumni, Bacow spoke on a wide variety of topics from the “admissions case to public service to Allston and efforts to tackle climate change and the opioid crisis,” according to University spokesperson Melodie L. Jackson.

English Professor Elisa F. New accompanied Bacow on the high school visit, where her class ‘Poetry in America’ is being taught through Harvard’s Division of Continuing Education. New led the class in conversation, discussing various themes within the works of poet Emily Dickinson.

The trip is one of several that Bacow has taken in recent months. After he was appointed as Harvard’s 29th president last February, he pledged to reach out to all parts of the country to address critiques that Harvard caters to coastal elites. In September, Bacow visited Detroit and Pontiac, Mich., where he grew up, in order to make the case for the positive role the University can play in people’s lives across the country.

“I think it’s important that people understand that graduates of Harvard are working hard to make places like Detroit more vibrant, more interesting, and to create opportunity for others,” Bacow said during an event in Michigan.

Bacow spoke of his Midwestern upbringing during his remarks at the Health Science High School and Middle College, a charter school in San Diego.

“Being here took me back in time to being a high school student myself,” Bacow said. “Both my parents were immigrants — and actually both were refugees to this country — and so education was really important to them.”

“They thought it was a way to provide a better life for me and my sister,” he added.

Former University President Drew G. Faust also took several trips to communities across the country during her tenure, traveling to Philadelphia and Cincinnati in the waning days of her presidency.

During a wider discussion on higher education, Bacow said that students “can get a great education anywhere,” but emphasized what you do with that education is critical.

“For almost any college or university in this country, if you apply yourself, if you seek out the right people, you can get a great education,” he said.