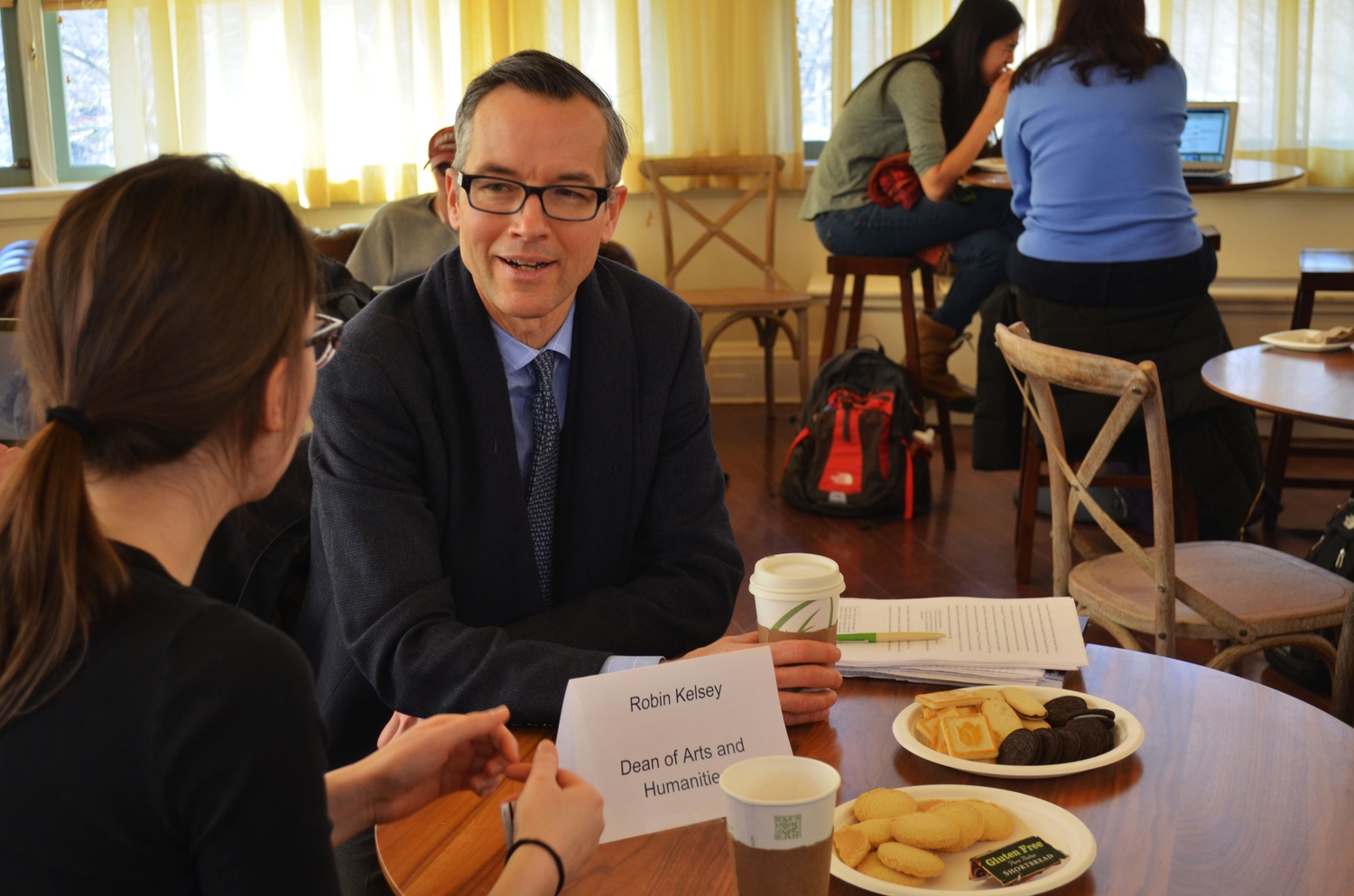 Dean Robin E. Kelsey talks to a student in the Barker Center. Kelsey is the creator of the Transcript Project. By Ellis J. Yeo
By Annie C. Doris, Crimson Staff Writer

Students will have the opportunity to enter the Transcript Project, a creative competition for undergraduates to reflect on their course choices and academic trajectory, according to an announcement by Dean of the College Rakesh Khurana on Wednesday.

The project encourages students to view their transcript as representative of a series of memorable academic moments rather than of a list of grades. Students can participate in the competition by submitting a piece of work, such as a short essay, song, or photo, that encapsulates and analyzes their academic journey at Harvard.

Project creator Robin E. Kelsey, dean of arts and humanities, said undergraduates on the student advisory board for arts and humanities were enthusiastic about the idea and said that the college transcript is often equated with a sense of anxiety.

“I was hoping to turn the transcript into an occasion for students to think differently about the intellectual odyssey that being at Harvard can represent,” Kelsey said.

Kelsey said he saw many transcripts when he was president of the College’s chapter of Phi Beta Kappa, a prestigious national honor society. He said that a lot of transcripts he reads are “immaculate or close to immaculate,” but are “a little short on adventure.” The Transcript Project’s purpose is for students to reflect on their intellectual journey and set aside grades.

“The motivation was to offset the many accolades that we have at Harvard for people with immaculate transcripts and to recognize the spirit of adventure which the transcript represents,” Kelsey said.

Encouraging students to consider their academic choices, the Transcript Project’s website poses a series of prompts: “What was my best semester? What made it the ‘best’?”

To launch the new competition, Kelsey said he participated in the project himself by digging his undergraduate transcript from Yale out of a cardboard box in his basement. Kelsey also took over Khurana’s popular Instagram account on Thursday to promote the project, posting black and white photos with commentary on his years as a student.

He wrote an essay, “D is for Dean (A Dean’s Transcript Project),” in which he reflects on a D that he received in a course on philosophical logic. Kelsey wrote he was searching for answers to “life’s big questions” and became uninterested in learning “formal logic;” he flunked the final for his philosophical logic course by writing about his “disenchantment.”

Kelsey wrote that the courses on his transcript range from aerodynamics to the history of pastoral nomadism and art history. Now, as a dean overseeing many diverse fields, he said he appreciates the knowledge he gained from taking a wide array of classes.

“The mental restlessness that pervades my transcript turned out to be valuable,” Kelsey wrote in the essay. “From my office in University Hall, I look after departments and programs that span subjects from ancient Egyptian tombs to contemporary fan fiction. My roving neurons could hardly be happier.”

Kelsey said he recognizes, however, that the world has changed since he went to college. He said that vocation was “the last thing on my mind” in college, while today, it is unrealistic to expect college students not to consider future jobs and postgraduate opportunities when selecting courses and concentrations.

“I certainly wouldn’t want students to take my project as a suggestion that this is the approach that you should take,” Kelsey said. “And I fully recognize that the way I approached course selection may not even feel available to students now.”

Kelsey said he hopes students will have fun with the Transcript Project and that reflections on their intellectual journey will enable them to make “interesting and adventuresome choices” as they continue college.

Concluding his Transcript Project essay, Kelsey wrote: “Tucked in a musty box in the basement, my transcript holds a reminder that life defies logic, and deans may begin with a D.”

A previous version of this article incorrectly indicated that Dean Robin E. Kelsey is the current president of the College's chapter of Phi Beta Kappa. In fact, he stopped holding that position last summer.