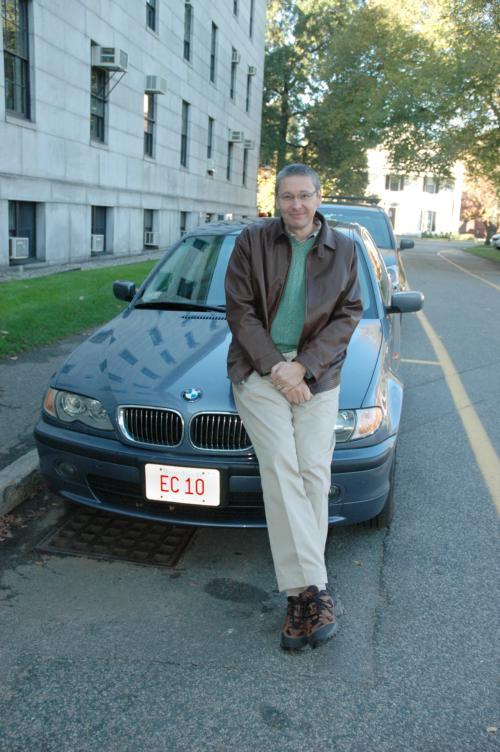 N. Gregory Mankiw, who teaches the introductory economics course, owns a BMW with a fitting vanity plate. He says he’ll pass it on to Ec 10’s next head.
Advertisement
Advertisement

A Brief History of Ec 10

To the many undergraduates who take it, and the many graduate students who teach it, Ec10 is—for better or worse—a pillar of Harvard’s liberal arts education, perennially popular but oft-critiqued.
By Che R. Applewhaite

“For the umpteenth year in a row Economics 10, ‘Principles of Economics,’ led the list of largest courses taken at Harvard.” This reads like a Crimson headline from last semester, but in fact it’s from the Fall of 1978.

To the many undergraduates who take it, and the many graduate students who teach it, Ec10 is—for better or worse—a pillar of Harvard’s liberal arts education, perennially popular but oft-critiqued. The history of the course shows that the unbound textbook used today, priced at $131, was not always how Harvard students got their start in the discipline of economics.

“Contrary to popular belief, Ec10 was never designed to be a pipeline for lower Manhattan,” says David W. Johnson, a former head teaching fellow who taught sections from 1980s until 2014.

Indeed, lower Manhattan was the furthest thing from Harvard’s original introductory economics course, Economics 1. According to a 1896 syllabus entitled “Lectures on Economic Development,” students were required to read books on topics ranging from philosophy to anthropology. This interdisciplinary focus meant students had to consider why economic history was a useful topic of study.

Only three professors have led the course since the 1960s: Otto Eckstein, Martin Feldstein, and N. Gregory Mankiw. All were, at some point during their careers, either members or chairs of the government’s Council of Economic Advisors.

Mankiw, pictured here in front of his car, has taught Ec 10 since 2005. By Ming E. Vandenberg

Starting in the 1960s, the curriculum began to focus more on giving students the tools to evaluate public policy. Lectures heard during the Cold War included Soviet Economic analysis. Otto Eckstein, the professor who taught the course until his death in 1984, considered different economic perspectives throughout his tenure. In 1979, students spent the first few weeks alternating between chapters written by classical economists and chapters writen by Karl Marx.

Under his tenure, the course name changed from Ec10 to Social Analysis 10 in 1977. But Eckstein, an advisor to Lyndon B. Johnson, became so associated with the course that he earned the nickname “Otto Ec-10.”

It was under his successor Martin Feldstein, though, that the curriculum began to resemble what it is today. While allowing students to use any mainstream textbook, he abolished separate sections for math-oriented students and for “radical” economics in order to make the sections “more homogeneous in ability and political interest.” He added guest lectures to increase variety.

Feldstein, who taught the course for 20 years, found that a pluralistic curriculum was impractical for beginner students. “Ec 10 doesn’t teach Marxist economics or Austrian economics or the economics of Catholic Social Teaching,” he says. “Those belong in a more advanced course on intellectual thought.”

One goal that has remained consistent throughout the course’s presence at Harvard is that Ec10 aims to help students become educated citizens, and to better reflect contemporary concerns.

“I used to begin the first lecture by showing a copy of the New York Times front page where there was usually a story that one could understand only after taking Ec 10,” Feldstein says.

When N. Gregory Mankiw became chief lecturer in 2005, the course name changed back to Ec 10, and content from the previously yearlong course was split into two semesters: one for microeconomics influenced most by the 18th-century Scottish Economist Adam Smith, and the other for macroeconomics, influenced by 20th-century English economist John Maynard Keynes.

But the most substantive recent change to Ec10’s curriculum came after the Great Recession, when economists realised students needed to know more about financial institutions and monetary policy, and the role both played in the unfolding crisis.

“The main draw of Ec 10 with most students continues to be the chance to equip oneself with the tools to design and implement better public policy,” Johnson says.

Elmendorf believes the course achieves this goal, particularly through its inclusion of guest lecturers. “Not everybody understands economics is about an array of social issues before they start Ec10, but they do once they finish,” he says.

However, some professors and students disagree, instead arguing the course should cover a wider scope of approaches to economics. Stephen A. Marglin is one of these professors. Marglin taught an alternative economics course, USW 17: “A Critical Approach”, until 2010. “The main problem is that Ec 10 teaches one perspective on the economy, one framework for understanding how the economy works, why it fails, and what to about the failures,” he said.

To counteract this, he spent “two-thirds of his course teaching alternative approaches which were also valid,” including different interpretations of Keynes’ work that criticise whether increasing market competitivity will lead to better economic outcomes.

Criticisms reached a head in 2011, when a group of students, inspired by the Occupy movement, decided to stage a walkout in the middle of an Ec 10 lecture.

“Mankiw is not doing a fair job representing economics. Rather than a difference between alternative or mainstream, the idea that this is the mainstream is misleading,” recalls Gabriel H. Bayard ’15, who organized the event.

Rachel J. Sandalow-Ash ’15, another organizer, worries that students won’t get to learn contrary perspectives at all during their time at Harvard because “many students are not Economics concentrators and won’t take more than two courses.”

In an email, Mankiw responded to criticism that the course doesn’t teach a pluralism of approaches. “Ec 10 includes a significant number of guest lecturers. The guests offer students a sense of the range of perspectives and approaches among leading economists,” he wrote.