In the wintertime, Y2Y and HSHS must navigate extreme weather conditions with a skeleton staff—watching the demand for overnight beds rise while the volunteer pool shrinks.
By Hamid A. Khan and A. Daniela Perez 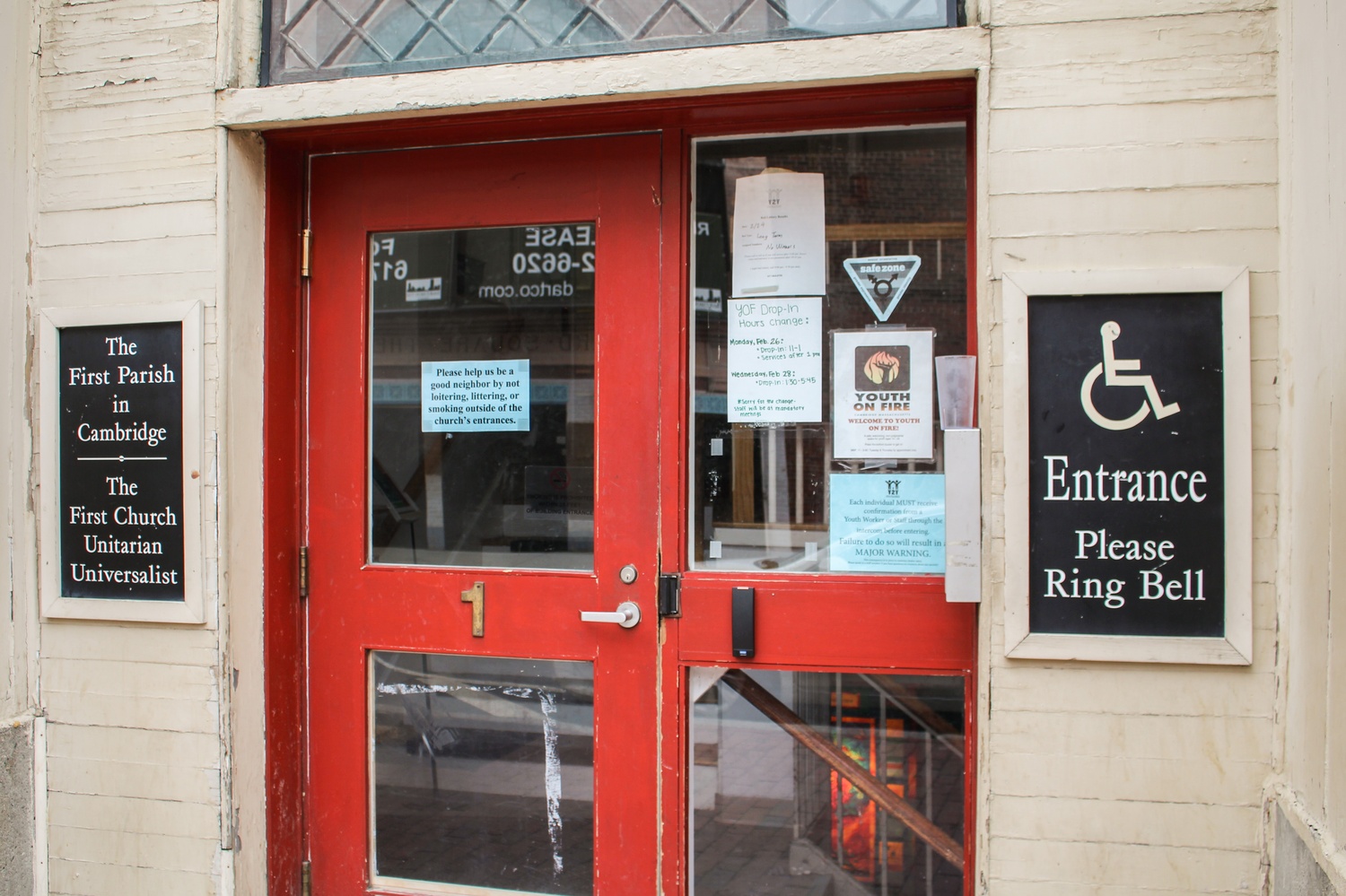 Y2Y, a shelter for homeless youth, is located in the basement of First Parish church in Harvard Square. By Hayoung Hwang

All Harvard University operations, including emergency health services, shut down almost immediately. The city gradually disappeared under more than seven inches of snow. At one point, more than 24,000 Bostonians lost power.

Throughout it all, Y2Y and the Harvard Square Homeless Shelter kept their doors open. The two shelters—both founded and run by Harvard students—stayed open to serve the local homeless community. Y2Y and HSHS remained operational despite a significant dearth of volunteers, given most College students spend winter break away from campus.

The bomb cyclone eventually passed, and students returned to campus. But the storm highlighted the larger predicament the student-staffed shelters face in the winter season.

During the often-freezing Harvard winter, Y2Y and HSHS must navigate extreme weather conditions with a skeleton staff—watching the demand for overnight beds rise while the volunteer pool shrinks.

A SMALL SPACE FOR A LARGE PROBLEM

On many nights, Y2Y has a dozen callers for a single bed.

Y2Y operates via a random lottery system, which homeless youth enter online or by calling the shelter. Individuals lottery for 30-day beds or one-night cots, the latter of which typically have a win rate of 70 to 80 percent, even with high demand.

With only 22 beds and five cots, Y2Y’s capacity is small compared to the number of local homeless youth in need of beds, according to Y2Y director Sophie R. Applbaum '19.

“We’re full or at least one person away from being full pretty much every night,” Applbaum said.

As a result, the shelter must often turn people away, especially during colder weeks, she said. Since the one-night bed lottery runs for half an hour starting at 9 p.m., entrants must wait until almost 10 p.m. to hear whether or not they won a place to sleep that night. Those who are turned away can request referrals to adult shelters for the night, but, for some homeless youth, this forms an undesirable alternative.

“Adult shelters are not primarily set up to help young people and to make young people feel like they’re safe,” Applbaum said. “Many people will choose to sleep outside, pretty much no matter the condition, rather than sleeping at an adult shelter.”

Y2Y—which first opened in Dec. 2015—distinguishes itself by delivering services suited for youth needs, serving only those between the ages of 18 and 24. The shelter is also unique for its nontraditional offerings—Y2Y provides more than just beds at night.

One of only two youth-specific overnight shelters in the Boston area, Y2Y offers young adults legal services and case management, as well as appointments with doctors, dentists, and mental health clinicians. The space is also fully gender-inclusive, aiming to create a safe and accepting environment for queer homeless youth, who comprise 40 percent of homeless young adults, according to a 2012 study conducted by the Williams Institute.

The vast majority of Y2Y staff and volunteer base are college students within the same age range as the guests, which creates a “cooperative dynamic” between the two groups, according to Applbaum.

With most Harvard students away for the bulk of December and January, far fewer people sign up to help with shelter meals and clean-up. Though always fully staffed with trained supervisors to comply with safety regulations, the two shelters must sometimes function with only a few additional volunteers to help out.

According to HSHS administrative director Ana K. Chaves ’17–’18, Harvard students constitute roughly 70 percent of the total volunteers. During term-time, the shifts are primarily worked by undergraduates, but in their absence, volunteers from the Cambridge area play an integral role in keeping the shelter up and running.

“Cambridge is surrounded by a lot of people that don’t disappear the moment the semester ends. We really do rely on much of the community members that live around here, whether those are young professionals or grad students,” said Corey A. Gold ’19, an administrative director for HSHS. “Different congregations come and do group shifts together.”

The Harvard Square Homeless Shelter operates at maximum capacity from the start of its operations in November until its season ends in mid-April. On most days, the shelter is open from 8 p.m. to 7 a.m., and the hours are broken down into four shifts, each staffed by four to six volunteers in addition to the two trained staffers.

As the weather consistently falls below the freezing point starting in early December, an increasing number of people call to enter HSHS’s daily lottery, used to allocate the limited number of beds. With the shelter regularly operating at maximum capacity over break, staffers say the absence of routine volunteers is felt even more acutely, with some shifts going understaffed.

OPERATING THROUGH THE COLD

Even with most of its regular volunteers gone, HSHS continues its operations as per usual, often relying on the assistance of new helpers. “It is always a comfort to have experienced volunteers. Just when things start to pick up, you can always rely on their own expertise, but first-time volunteers are usually enthusiastic, which is great,” Chaves said.

Despite difficulties ranging from freezing storms to absent student volunteers, Y2Y and HSHS continue to fill their beds and shelter the local homeless community. For much of the staff, it is not the logistical accomplishments but the emotional importance of the job that stays with them well after their shifts end.

“As the numbers rise and as more people call in to lottery, as our capacity remains the same, I think we come more closely into contact with the reality of the need that we are trying to serve,” Chaves said.

For some, turning away an increasing number of people serves as a sobering but essential reminder of the need both shelters are meant to address.

—Staff writer Hamid A. Khan can be reached at hamid.khan@thecrimson.com.