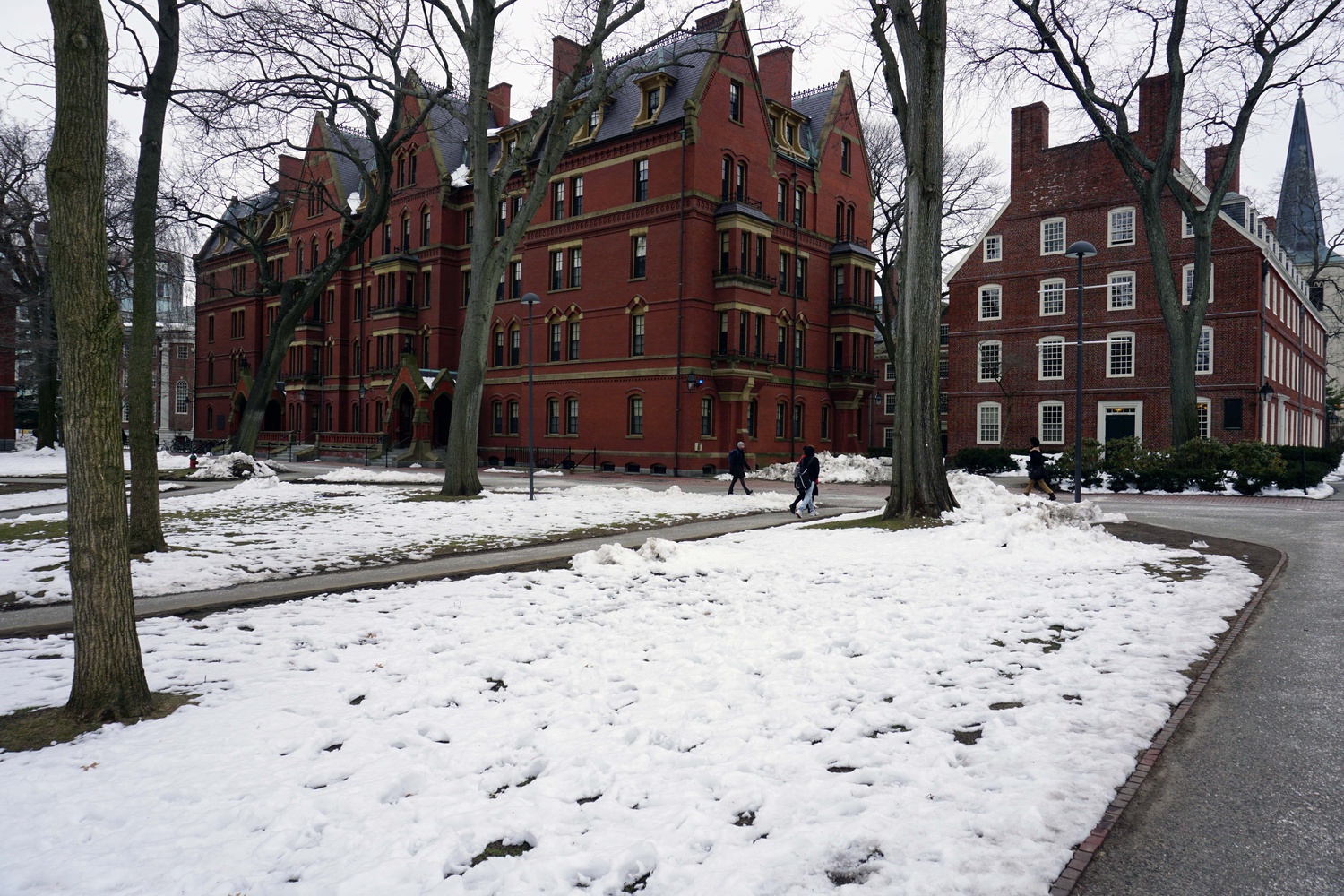 With a week of cold temperatures, Harvard Yard is still covered in frozen snow despite the onset of spring. By Jacqueline S. Chea
By Arnav Agrawal and Leon K. Yang, Crimson Staff Writers

Students in a Harvard archaeology class are developing a virtual and augmented reality app that will allow users to walk through Harvard Yard and use their phones to look past the dirt surface to see artifacts excavated and found underneath.

Enrollees in Anthropology 1130: “Archaeology of Harvard Yard" are creating the app. These students also dug up and excavated the items rendered visible by the technology.

The teaching staff of the class, which digs up portions of Harvard Yard looking for remnants of old buildings that previously occupied the space, teamed up with Jeff P. Emanuel, Harvard's associate director of academic technology, in fall 2017 to begin developing the app.

Emanuel, an archaeologist himself, co-founded the Digital Scholarship Support Group, an interdisciplinary initiative between Academic Technology, the History Department, the Harvard Library, and the Harvard Institute for Quantitative Social Science.

Director of Academic Partnerships and Peabody Museum Curator Diana D. Loren, who co-teaches the class, said the excavation site centers on the sites of the Old College and Indian College, which were both built in the late 1600s but have since been torn down.

Loren said she is excited about the app because of its ability to make artifacts—which so far include pottery pieces, glass, and tobacco pipes—more accessible to the public. The app will also allow the class to keep a digital record of pieces enrollees recover.

“It can really reach a greater public, and the story of early Harvard and how Harvard developed [and] the lives of those students really become more available to the public at large,” Loren said. “I think that’s pretty exciting.”

Emanuel and his team accumulated photogrammeric and geospatial data taken by the course’s digital teaching fellow Alexis L. Hartford. The team also brought on Cambridge-based startup Archimedes Digital to drive forward the development of the app.

“Field archaeology has always been about ingesting massive quantities of data, and in recent years, Augmented and Virtual Reality have become more prevalent as means of displaying sites and artifacts to the general public,” Emanuel wrote in an email.

According to Hartford, who did similar digital work on a project in Mexico, the app will allow users to visualize the 3-D models of excavation sites while also referencing student-written “object biographies” about the artifacts obtained through excavation.

“The students did a really good job in connecting those to the bigger picture issues that we’re looking at studying,” Hartford said. “I think that’s really what is making this app work.”

Charles K. Michael ’20, a former Crimson photographer who took Anthropology 1130 last year, said, though he’s excited about the app, he sees it as a “supplement”—and not a replacement—for the hands-on learning experience of excavation.

“The information is presented really well, but the app, or technology, can never replace the actual experience of digging,” Michael said.

Michael’s own excavation work in the class included finding the remnants of an ink bottle from he later identified as hailing from Carter’s Ink Company, which dates back to the 1800s.

“You can scroll layer by layer as you’re sifting through the dirt virtually in the app and see the different types of objects you find at different layers, so I think that’s one of the coolest things about the app that you can’t get in a museum setting and you can’t get just by someone explaining to you,” Michael said. “You have to really see it.”

The app, which is currently in beta testing, will become available for public use at the “Amazing Archeology” fair at the Peabody Museum this weekend.