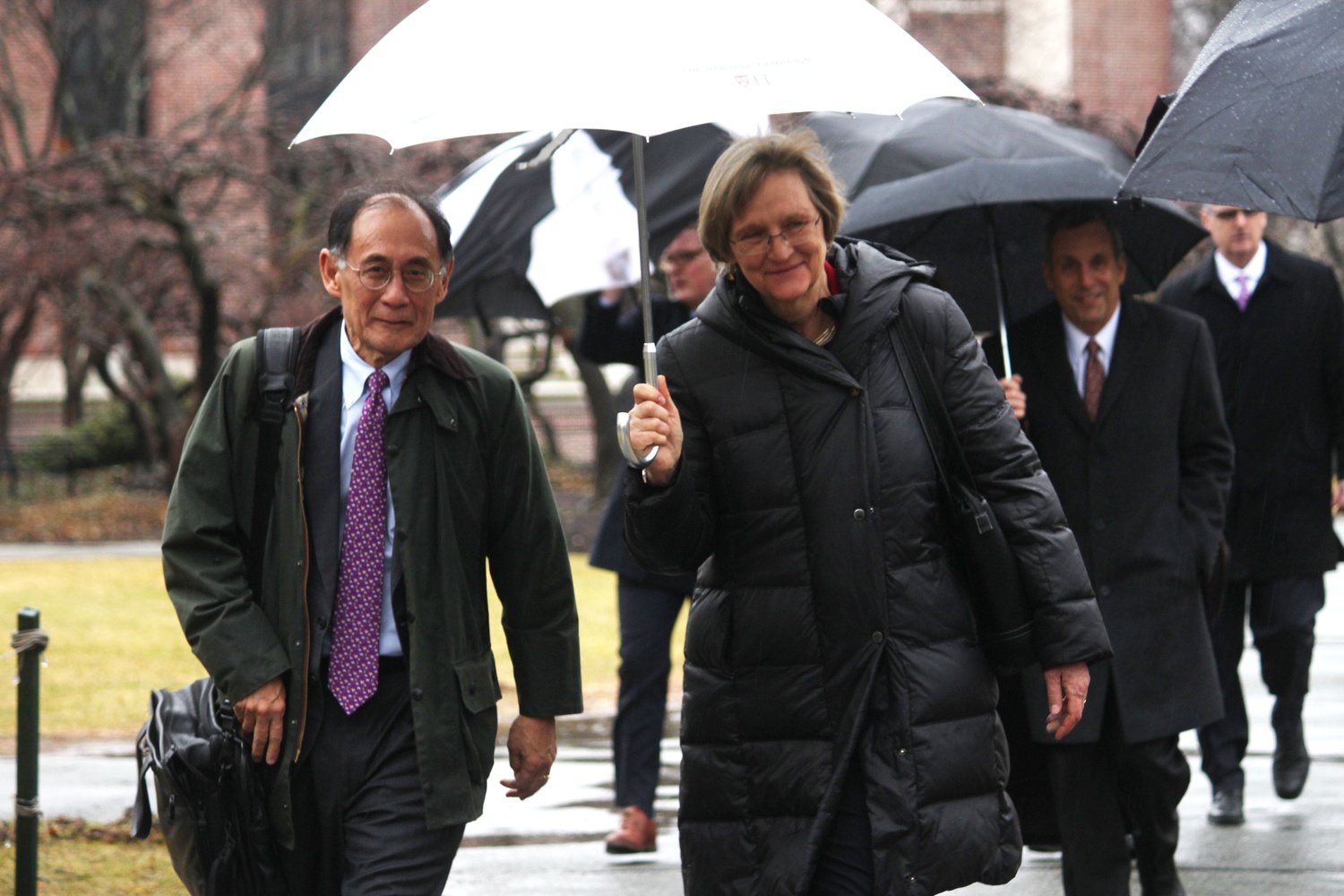 Drew G. Faust and William F. Lee '72 walking to the press conference to announce the next president of Harvard University on Feb. 11, 2018. By Casey M. Allen
By Kristine E. Guillaume, Crimson Staff Writer

Wilson’s appointment coincides with the release of the Presidential Task Force on Inclusion and Belonging’s final report Tuesday. In the report, the task force—which Faust convened in Sept. 2016—called for central administrators to coordinate efforts to bolster diversity and inclusion across the University.

Wilson is currently a member of Harvard’s Board of Overseers—the University’s second-highest governing body—and served as the executive director of the White House Initiative on Historically Black Colleges and Universities under the Obama administration. While he was executive director, Wilson recommended University President-elect Bacow as an adviser to President Barack Obama on the initiative in 2009.

Bacow will take over from Faust in July, and it will fall to him to oversee the bulk of the task force’s recommendations.

Faust wrote that Wilson’s experience in higher education and connections to Harvard will enable him to “bring the task force report to life.” In his new role, he will be responsible for planning structures for improving inclusion at the University and hiring central administration personnel to conduct this work for the duration of this spring and next academic year.

In an interview Monday, Wilson said he is excited to work to make the Harvard experience “more enriching and fulfilling for more people.”

“This is what was most important for me and why I am truly excited in this role and invested in it, there is a sense that we can't truly be Harvard until we get this right, until we figure out how more graduates of Harvard can feel like it's my Harvard, too,” he said.

“In consultation with President-elect Bacow, I have identified actions that can be taken immediately and that I hope will serve to generate momentum for the longer-term strategic work that will extend well beyond my tenure,” Faust wrote.

The final report charges Harvard to “become its best self” through a framework of “Four Goals,” “Four Tools,” and a set of eight concrete recommendations—including enhancing mental health resources, improving recruitment and retention strategies for faculty, and establishing pipeline programs for staff, among other measures.

“[The task force’s] articulation of four goals and four tools, within the framework of pursuing excellence on a foundation of inclusion, defines an essential path for the University to pursue,” Faust wrote. “Through its eight recommendations, the task force has set out concrete steps to help start us down that path.”

As part of her immediate action points, Faust has designated $10 million in presidential funds to new faculty hires, provided additional presidential funds to enhancing mental health services, and required deans and administrators to produce plans to advance inclusion and belonging in their schools or units.

In addition, Faust said she and Bacow look forward to working with Government Professor Danielle S. Allen—one of the co-chairs of the task force—to establish the Smith Campus Center as a place for events surrounding “civil disagreement.”

“Both President-elect Bacow and I look forward to working with Professor Allen and others to imagine additional ways in which the Office of the President might help to sponsor community conversations designed with a similar goal of bringing together contrasting points of view on critical questions,” Faust wrote.

Faust also wrote she has asked administrators to develop policies to improve wayfinding on campus and ensure Harvard’s public art “reflects our commitment to belonging and inclusion.”

Faust, in the closing of her letter, said she is excited to sing the revised last line to the alma mater—also a task force initiative—at this May’s Commencement.

“When it comes time to sing our alma mater, updated at the suggestion of the task force, I will proudly give voice to the song’s new final line—and its recognition that the pursuit of truth and knowledge belongs to everyone at Harvard, from all backgrounds and beliefs,” Faust wrote.