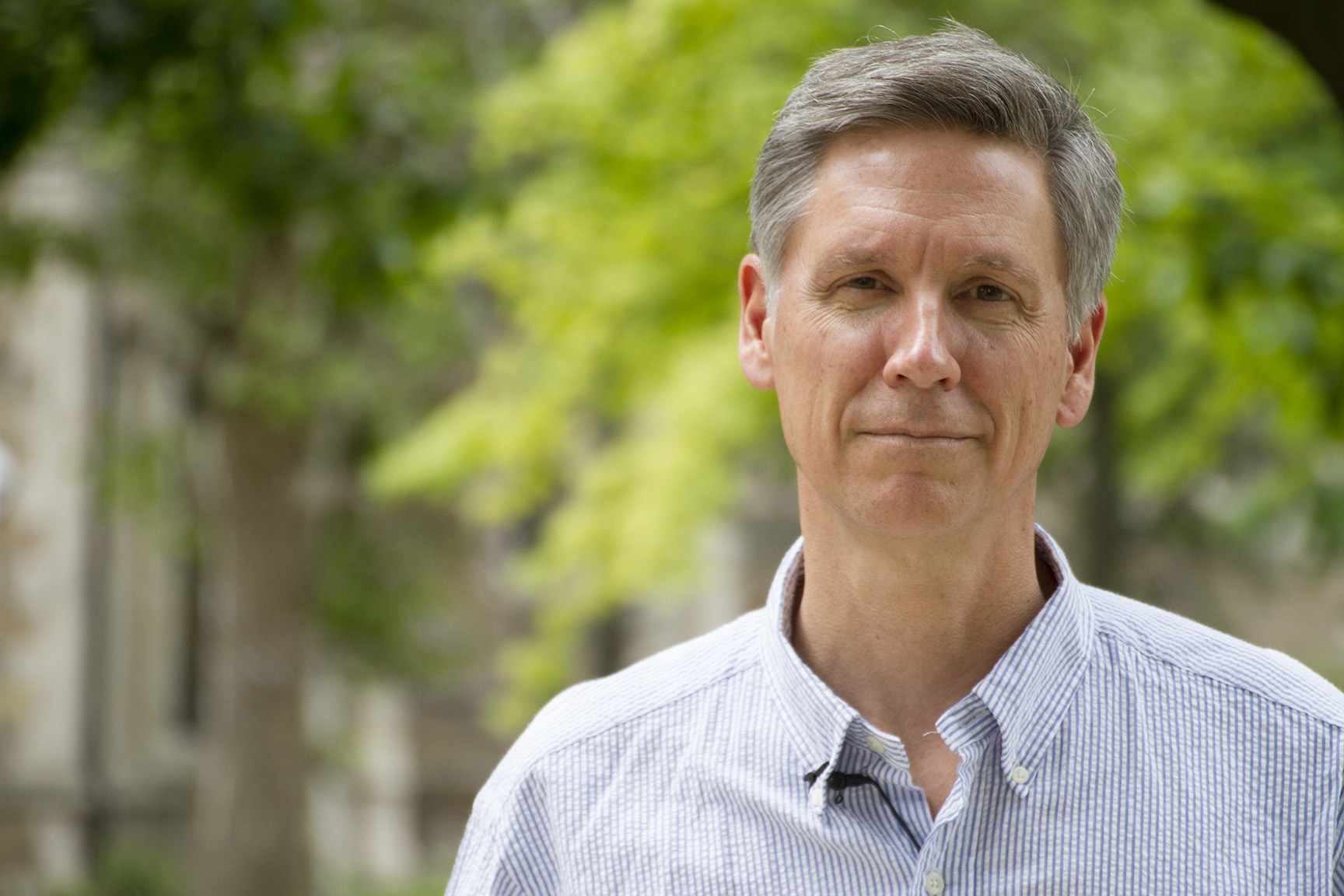 The Making of Philip J. Deloria

Philip J. Deloria’s transitional office inhabits the dimly lit basement of Robinson Hall. Even though it’s in the basement, the room has partly functional windows because it’s only 75 percent underground. “I like to brag that I have a corner office at Harvard with two windows,” he jokes.

Though Deloria, Harvard’s first tenured professor of Native American history, says this ironically, 18-year-old Deloria would likely react with genuine amazement. At that time, he was choosing to accept a small scholarship to study music at the University of Colorado. He remembers that his father, Vine Deloria Jr., accurately forecasted the years of his life after accepting the offer: “Men in the Deloria family don’t really figure out what they’re doing until they’re about 30.” 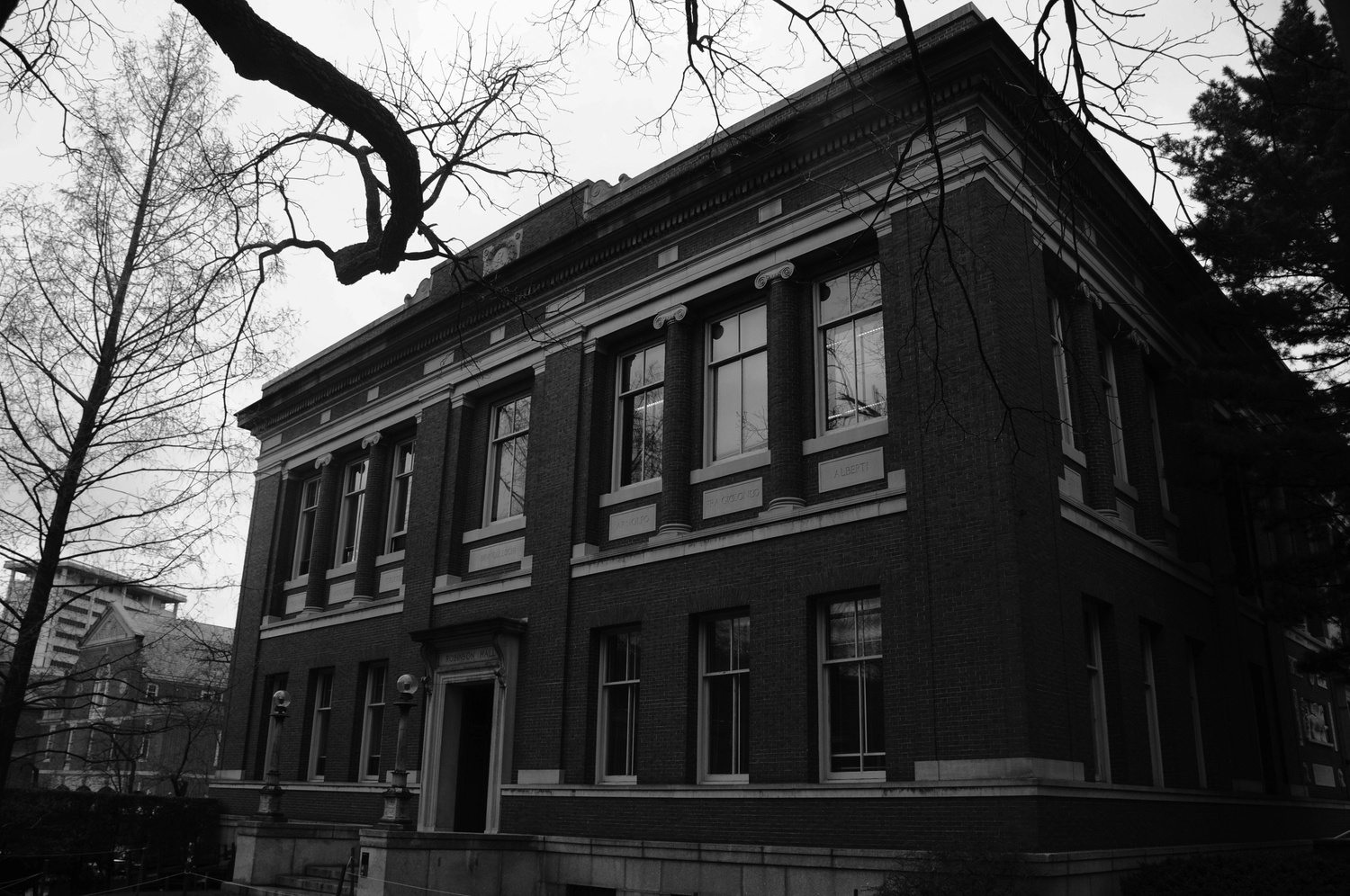 Long before that premonition, Deloria was born into a family steeped in history. On his paternal side, Deloria descends from a Yankton Dakota lineage, with the notable exception of a French fur trapper (hence Deloria, from the French Deslauriers). His great-grandfather worked as a minister at the Standing Rock Reservation. Following suit, Deloria’s grandfather also took up the ministry, working in Martin, a town between the Pine Ridge and Rosebud Reservations.

Deloria’s grandfather married a woman from New Jersey, a descendant of a colonial family. Her family’s history, in total contrast to the Yankton Delorias’, includes slave ownership, participation in the Mexican-American War, and even the acquisition of Native American land.

Deloria’s prescient father, Vine Deloria Jr., broke away from the ministerial tradition and became an activist and scholar. During Deloria’s youth, his father served as the president of the National Congress of American Indians and worked assiduously to collect his family’s history, especially the correspondences of his anthropologist aunt, Ella Deloria.

This historical, activist milieu was fully encapsulated by Deloria’s childhood home in Colorado. Deloria remembers his childhood home as one in constant flux. They were “a family that [was] involved in education, that [was] mobile, and that [was] cosmopolitan,” he says.

Friends of Deloria’s father were constantly in and out of the house. Deloria remembers Ramblin’ Jack Elliott—“thought to be the bridge between Bob Dylan and Woodie Guthrie”—would visit the house with his two dogs. When one of the dogs chewed up the house’s door, Elliott apologized by giving Deloria a shirt that he still owns.

Deloria remembers that his father started hanging out in the Lion’s Head, a New York City bar frequented by writers and artists. During that time, writers often sojourned at the Deloria home. Writer Hyemeyohsts Storm—who, Deloria remembers, dried himself off with toilet paper rather than a towel—taught a young Deloria how to play the mandolin.

Perhaps unsurprisingly, Deloria became “this nerd kid” obsessed with music. He picked up the clarinet in third grade and transitioned to the trombone after some years at the behest of his orthodontist, who observed the increasing crookedness of his teeth. “I accidentally, you know, got good,” he remembers. Deloria also began playing the guitar, though his skill has always been impaired by a shower door accident that left him with 52 stitches in his left wrist.

Despite his dark foresight, Deloria’s father encouraged him to pursue music. Deloria’s father introduced him to country-western artists like Slim Whitman and made him learn the song “Wildwood Flower” on guitar. Studying music in college seemed like the natural next step.

At the University of Colorado, Deloria wasted no time. “I kept running into all these banjo players,” he recalls—and so Deloria and his friends started a bluegrass band. Together, they were the first band to play at the outdoor Pearl Street Mall when it opened on St. Patrick’s Day in 1976. The band shivered outside as shoppers walked by. Deloria particularly remembers a beautiful woman who launched a paper airplane made out of a dollar bill into one of their open instrument cases. “We took whatever money we earned and went to the pizza place.”

Deloria and his friends embarked on a winding musical journey. Their band shapeshifted between playing bluegrass, country, top 40, and ’50s music. In the early ’80s the group became a new wave band. “We wore clothes with zippers and had a drummer with blue hair,” Deloria remembers.

Eventually, the band bought a cheap van and began playing gigs around Boulder. “We had an agent who booked us into a whole lot of crappy gigs.” The band’s first excursion in the van landed them in Glenrock, Wyo., a town with an estimated 1980 population of 2,736.

A flat tire about 30 miles out of Boulder caused the band to arrive late. When they eventually arrived, they unpacked their gear and began playing their new wave set, filled with songs by bands like The Cars and The Police. To the band’s great confusion, the audience shouted “one oh five, one oh five” throughout the set. When they took a break, the band discovered “one oh five” referred to the number of a song on the jukebox that the audience began playing repeatedly. The song, coincidentally, only had three chords, so the band wrote down the lyrics and played the song once they returned to the stage. “It was called ‘You Piss Me Off, You Fucking Jerk,’ which is just a stupid, stupid song,” Deloria recalls. Beatboxing the song’s truck-driver beat, Deloria sang me a refrain from the song from memory: “Well, it’s 40 below but I don’t give a fuck got a heater in the truck and I’m off to the rodeo (beatboxing) you piss me off (beatboxing) you fucking jerk (beatboxing) you get on my nerves.”

The experience of playing what Deloria calls “the most redneck thing ever” was a “kind of wake-up” for the young Deloria: “This is not fun.”

The next day, when the band was stuck in Glenrock because of more car trouble, Deloria suggested they visit Fort Fetterman, a 19th-century military base used by the U.S. Army when fighting Native American tribes. As he walked around the site, picking up old nails, he began to feel the tug of academia. “It was somewhere in there that I realized that I actually do kind of care about history and places and landscapes.”

After graduating from Boulder, Deloria entered what he calls his “lost years.” He realized he couldn’t compete with artists from schools like Juilliard for spots in symphonies, and began teaching middle school band while continuing to play guitar with his friends. After two years, he realized 30 years of teaching music “sounded really unfun” and began crewing for music video shoots. He also coached basketball. Those years, according to Deloria, “were great.”

Eventually, his father suggested that if he wanted to continue “messing around” he might as well go back to school. So Deloria returned to UC Boulder, this time for an M.A. in Journalism and Mass Communications, while still working as a substitute music teacher from time to time. Deloria began to think more actively about Native American issues, and, as his professional project, filmed a documentary about a land-claims issue around the Black Hills in South Dakota. At the same time, Deloria took a class with historian Patricia Limerick, who suggested that he get a Ph.D. So he did. To study for the GRE, Deloria would make his gifted students work through math problems with him in exchange for a class-wide study hall.

Deloria followed his time as a Master’s student and substitute teacher with a Ph.D at Yale University. At Yale, Deloria’s life changed drastically. Though he was too nervous to speak during class his first semester, he succeeded in distinguishing himself. “I became an intellectual,” he recalls. Deloria “had a really good book idea in 30 seconds” and it became his dissertation.

After leaving Yale, Deloria returned to UC Boulder to teach, but found he no longer enjoyed the place that had nurtured him earlier. Deloria “had left Yale with way too much of a critical consciousness” to return to homogenous, privileged Boulder. It didn’t help that he had to share an office with his dad, who made a habit of smoking and “shooting the breeze” with his students. Deloria then moved to Michigan, where he taught songwriting and helped expand the Native Studies program at the University of Michigan.

Now, as he settles into Harvard, Deloria has a number of projects that he hopes will last him until the end of his career. He plans on writing a book about the “epistemological crisis” of the Lenoid meteor shower of 1833 and the ways different ethnicities and in-groups reacted to it. This work, he hopes, will explore the space between Native Studies and African-American Studies. Deloria also plans to complete a collection of essays in the future.

Though his office at Harvard currently lacks decoration, the few items he managed to bring from Michigan to Harvard speak to his colorful past and passion for Native American history. To the right of his desk hang two items: a black-and-white photo and a blue cloth satchel. The photo, taken by early 20th-century Kiowa photographer Horace Poolaw, depicts the Carnegie Indians baseball team, ca. 1933. The satchel contains sweet grass, tobacco, sage, Navajo jewelry, kazoos and cowbells. A friend gave Deloria the gift to thank him for taking part in a performance of Native music.

Unfortunately, arthritis and lack of time prevent him from practicing much these days. But most Sundays, Deloria can still be found playing country-western music with his friends.