Junot Díaz on the Monster of 'Islandborn' 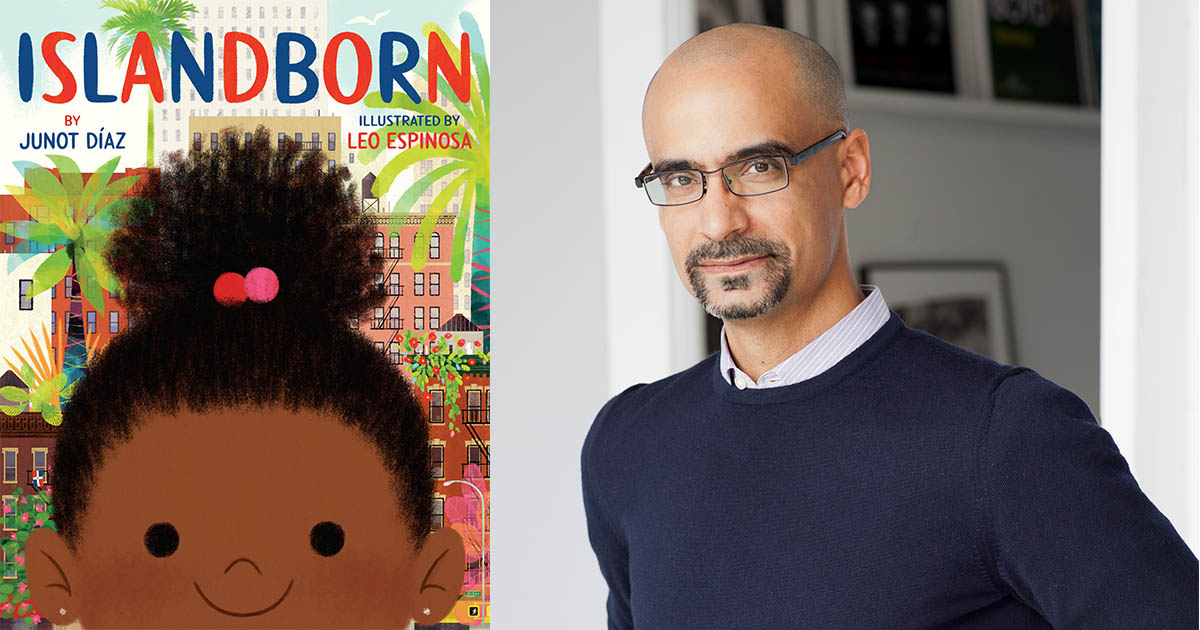 Junot Díaz wants you to know what children’s books can do. His first venture into the genre, “Islandborn,” follows a young girl named Lola as she tries to remember the Island, the country she left as a baby. She tracks details through memories from family and friends, all of which are vividly illustrated by Leo Espinosa in brightly colored pages—that is, until a dark, shadowy “Monster” interrupts Lola’s cheerful narrative.

“I was hoping this book wouldn’t just be a comment on little Lola and her lovely family and this larger island community from which she comes,” Díaz says. “I was hoping it would also be something of a dialogue about what children’s literature is capable of.” Children’s books are no strangers to monsters or antagonists, the building blocks to many self-sustaining plots. Under Díaz’s pen, the Monster of “Islandborn” comes to represent larger political implications.

“For me, the Monster represents the savage, traumatic histories from which many of us immigrants emerge—a history that is often erased or silenced within our communities and inside of the community in which we find ourselves,” Díaz says. “It’s a common injury that many immigrant communities wrestle with.”

The Monster of “Islandborn” is a large, bat-like creature. In its first appearance, it flies above a wave that threatens to encapsulate the Island. For those familiar with Díaz’s work, the parallels between the Island and the Dominican Republic are overt: between the Monster’s 30 years of havoc and Rafael Trujillo’s 31 years of dictatorship, and between the wave and Hurricane San Zenon, the natural disaster that prompted Trujillo to place the nation under martial law and rebuild Santo Domingo under a new name—Ciudad Trujillo (Trujillo City). But Díaz makes no explicit references to what the Monster could represent: The monster is simply called “the Monster,” just as the island is called “the Island.”

This ambiguity is intentional. “One wants to offer up opportunities for readers. I think that you want readers to participate in the text, and therefore the monster can be read multiplicitously,” Díaz says. “I would argue it’s part of being fair to your reader, but also that even within one specific community the political monstrosities I’m talking about don’t land on us equally. I think that for me it’s far easier to have a symbolic representation than an explicit one.”

At one point in “Islandborn,” Lola’s grandmother sees Lola’s drawing of the Monster, and grows still. “Abuela, did you know about the Monster?” Lola asks her. “Of course, hija. Why do you think so many of us are here in the North?” It’s a moment that could be a manifestation of cultural trauma, but Díaz says he wants readers to make their own evaluations about the book.

“I would hate to over-authorize any particular reading. I would simply say that if you finish this book, by the time you get to the end, you have to read a lot of incidents and characters completely differently,” Díaz says. “I would make the claim that you can’t read the innocuous interactions in the first three quarters of the book quite the same way once you understand what’s lurking behind them.”

Despite these potentially dark undertones, most of “Islandborn” is filled with vibrant illustrations describing Lola’s own journey in finding the Island. The Monster only makes visual appearances on three spreads out of 48 pages. In its second, it sinks into the sea, eclipsed by a chain of people holding hands in an act of defiance: “Heroes rose up. Strong smart young women just like you, Lola, and a few strong smart young men, too.”

“One of the trends we see in children’s writing, in children, is that they’re more emotionally robust, more narratively resilient than adults imagine them to be. And again, I always think the politics of innocence don’t serve our communities well,” Díaz says. “If you’re a person of color, if you’re a person of African-descent, if you’re an immigrant—all these things I am—these politics of innocence that structure children’s literature in some ways do us more harm than they do us good. They erase or they discourage realities and reckonings without which those of us who are members of these communities cannot come to a real understanding of who we are.”

Díaz argues that some amount of realism—despite its somber nature—is necessary and, perhaps, liberating. “Is Lola more integrated, more empowered, and more full of joy before her realization that the Island is haunted by the Monster,” Díaz asks. “Or after?”

The monster makes its third and final appearance on the last page of “Islandborn.” Lola opens her book of drawings, “and out burst[s] the Island” in a flurry of sunshine, music, and smiling faces and animals. And warriors—young women like Lola—who battle the Monster into the corner of the page, away from their home and into the ocean.