After a childhood friend committed suicide, Reed T. Shafer-Ray ’18 began pushing for twin gun safety bills in the Massachusetts State House that he hopes will save lives.
By Nina H. Pasquini and Jordan E. Virtue 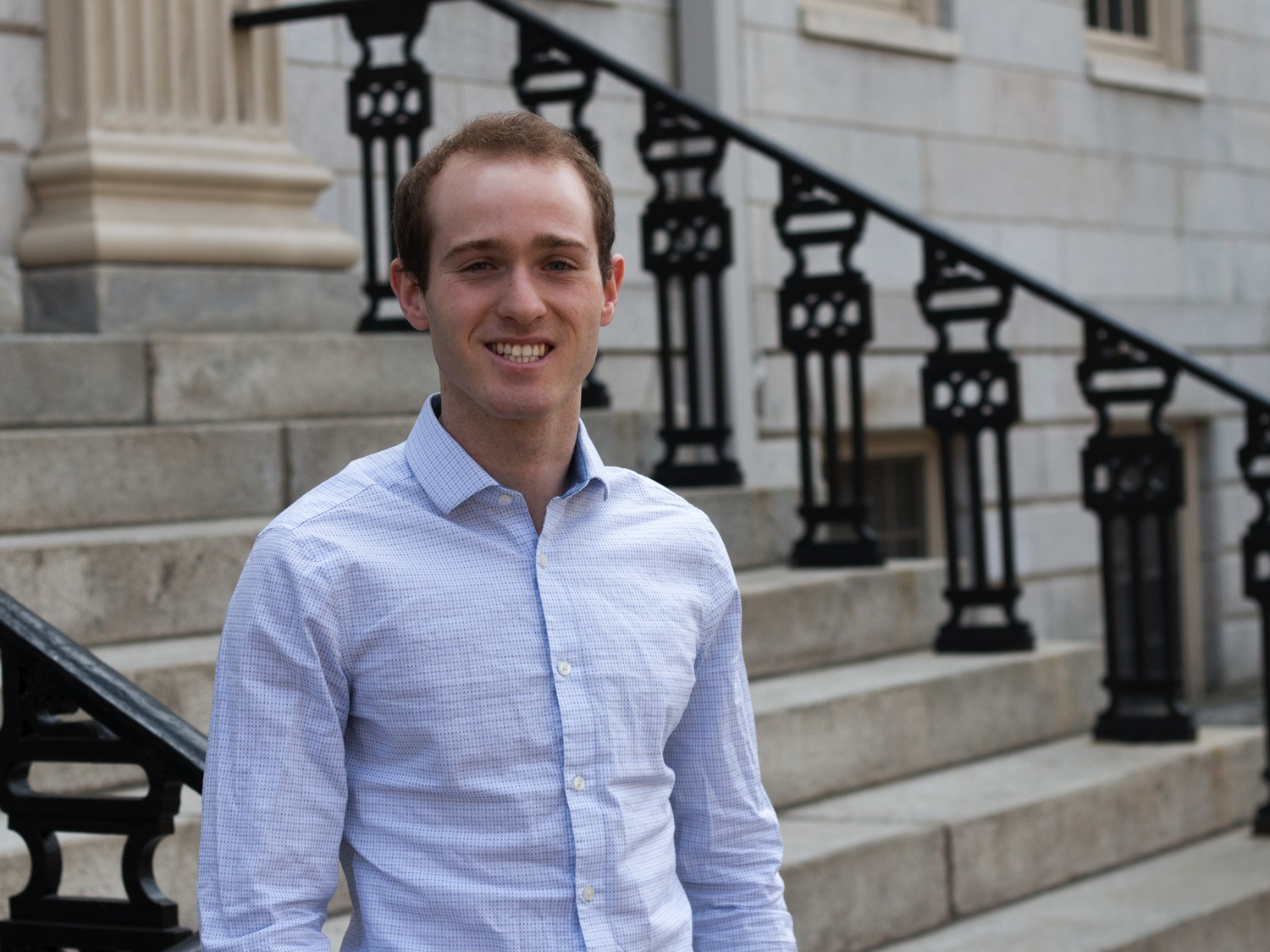 On August 15, 2016, Joseph D. Ostas rented a room at the Holiday Inn Express in Norman, Oklahoma. He brought along stuffed animals, a well-used Virgin Mary candle, and loving notes to family and friends.

Then he shot himself in the head with a Taurus 9mm semi-automatic pistol he purchased legally at a nearby Academy Sports. He was 24 years old.

Ostas was an outgoing and happy child, but he developed anxiety, depression, and mild Asperger’s Syndrome during high school. He struggled with suicidal thoughts for the last three years of his life, but was proactive in seeking help—his family spent years working through psychiatric and prescription therapies, and he self-admitted to mental health facilities on six separate occasions.

“This was a young man who was asking for help,” said his mother, Andrea Scopelitis. “Joseph was very open—he wore his heart on his sleeve.”

“I think the most tragic part about the whole thing is that everyone knew it was coming,” said Reed T. Shafer-Ray ’18, who grew up down the street from the Ostas family.

Ostas had already purchased handguns twice before committing suicide; but because none of his mental health facility admissions were court-ordered, he passed all background checks and never earned a spot on a no-sell list, despite his parents’ pleading with the local gun store owner.

In the wake of Ostas’s death, Shafer-Ray, a Social Studies concentrator, decided to take legal action to ensure something similar would never happen again. After reaching out to legislators, Shafer-Ray began pushing for two separate bills in Massachusetts meant to improve gun safety for individuals like Ostas.

One bill seeks to make it more difficult for those at risk of self-harm to obtain guns by allowing family members or law enforcement officials to petition to prohibit or revoke those individuals’ access to firearms. The other would allow Massachusetts residents to voluntarily put themselves on a “no-sell” list.

Both bills are currently wending their way through various Massachusetts House committees; it is unclear when they will come to a full vote. In order to advance the twin laws, Shafer-Ray has spent hours negotiating with Massachusetts legislators, has testified in committee several times, and spoke in front of tens of thousands of people at last month’s March for Our Lives protest in Boston.

Scopelitis is working with Shafer-Ray to argue for the bills; though she lives in Oklahoma, she traveled to Boston in Nov. 2017 to testify along with her son’s childhood friend.

Scopelitis said she believes her son would have taken advantage of the legislation she now hopes to bring into existence.

“It was this very preventable death,” Shafer-Ray said. “If you could just prevent him from getting a gun, he wouldn't have been able to do what he did.”

Shafer-Ray was preparing to return to Harvard for the 2016-2017 school year when he heard Ostas had committed suicide. He swiftly reached out to Scopelitis to discuss trying to push through gun control legislation in their home state, but the filing deadline in Oklahoma had already passed.

“Instead of just waiting a whole year to try to pass it in Oklahoma, I was like, ‘Why don’t we bring it to Massachusetts, where I can actually advocate for it?’” Shafer-Ray said.

Shafer-Ray contacted Massachusetts Rep. Marjorie C. Decker, who said she was interested in his ideas. The two met for the first time in fall 2016; soon after that meeting, Decker’s office drafted versions of the two bills, dubbed H.3610 and H.3611, respectively. Decker could not be reached for comment.

Within the court day, a judge considers the written petition and determines whether there is reasonable cause to believe the individual in question “poses a significant danger of causing imminent personal injury to self or others.” If the judge agrees with the petitioner, the court immediately issues a temporary version of the order that prohibits the individual from acquiring new firearms and takes away firearms he or she already owns for a maximum of two weeks.

The judge later holds a full court hearing, during which the petitioner and respondent are both allowed to present “credible evidence,” including recent acts or patterns of violence and dangerous mental health issues. If the court finds a “preponderance of evidence” that the individual is a danger to themself or others, the judge issues a more permanent version of the order that bars access to firearms for one year.

Laws establishing similar programs have already been enacted in Connecticut, Indiana, California, Washington, Oregon, Rhode Island, and Florida. On Wednesday, the governor of Vermont added his state to that list when he signed into law a new initiative allowing for protective orders.

The other bill Decker’s office drafted, H.3611—“An Act authorizing the voluntary disavowal of eligibility to purchase a firearm”—establishes a statewide list of people who voluntarily deny themselves the ability to buy guns. Individuals who place themselves on the no-sell list must petition the court to regain access to firearms.

Shafer-Ray acknowledged some have criticized gun control measures for infringing on Americans’ Second Amendment rights, but said he does not think either H.3610 or H.3611 violate the Constitution. He noted the no-sell list, in particular, is “completely voluntary.”

“3611 is more novel, and it's something that Joseph's mom and I came up with pretty independently,” Shafer-Ray said. “What his mom likes to call his bill is the 'Siren bill,' referring to Odysseus.”

In the Odyssey, Homer tells of Sirens—horrific creatures with angelic, seductive voices. At one point in the epic, Odysseus asks his crew to lash him to the mast so he can listen to the Sirens’ song without giving into temptation and swimming to his death. 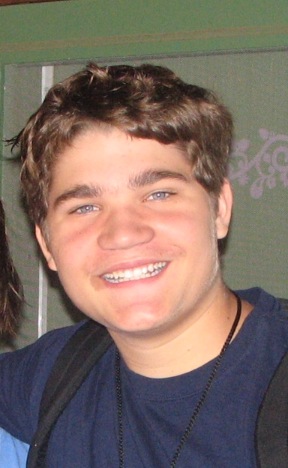 “[Joseph] knows that the temptation is great for himself, and he knows that it’s extremely dangerous and it’s something he doesn't want when his mind is clear,” Shafer-Ray said. “But he knows also that he will be tempted and he will, on bad days, he’ll reach out for the guns.”

In addition to joining forces with Decker, Shafer-Ray has worked with Frederick E. Vars, a law professor at the University of Alabama, who independently developed the idea of a voluntary do-not-sell list in 2015. Vars, like Scopelitis, has traveled to Massachusetts to testify in committee as part of Shafer-Ray’s push to pass the bills.

To date, only one state—Washington—has enacted some version of what Vars called “the Odysseus bill.” But Vars said he hopes more will follow; he noted that, when he asked high-risk patients at the University of Alabama Birmingham Medical Center if they would be interested in joining a no-sell list, 46 percent of patients answered yes.

“Suddenly the public health implications, if you could actually get that kind of percentage of people in a large and high-risk population to restrict their access to guns in this way, is no longer just saving a few lives—it’s saving hundreds of lives,” Vars said. “I really do think if it were national that it would have that kind of potential.”

‘STUDENT VOICES ARE HARD TO IGNORE’

As the two bills wind through the Massachusetts House of Representatives, Shafer-Ray is not sitting idle.

In addition to collaborating with Scopelitis in Oklahoma and Vars in Alabama, Shafer-Ray is working closer to home. He has joined forces with local activists and members of the Harvard College Democrats to garner support for H.3610 and H.3611 as well as gun control measures more broadly.

During Shafer-Ray’s freshman year, he and Sharon Yang ’18, then the co-chairs of the College Democrats’ policy and publicity committee, established a now-annual Lobby Day, during which Harvard students travel to the State House to promote certain pieces of legislation.

The College Democrats have lobbied for H.3610 and H.3611 during past Lobby Days, Yang said, and will continue to advocate for both bills.

Recently, Shafer-Ray lobbied for the bills in a different way, speaking in front of thousands of people at last month’s March for Our Lives protest in Boston. That march, meant to push for stricter gun control measures nationwide, came in the wake of a deadly shooting at a high school in Parkland, Fla. that left 17 people dead.

Shafer-Ray said his anger outweighed any fear he felt addressing such a large crowd.

Both said they think Shafer-Ray’s twin bills are relevant to the sit-in and should form part of the larger campus discussion around gun control.

Garcia said the notion of a voluntary do-not-sell list is “changing the narrative” of the intersection between gun violence and mental health.

“Giving more autonomy to people who are diagnosed as mentally ill is a really important step,” Palandjian said.

Shafer-Ray and Vars both said they are hopeful for the future, noting there is a swell of support for gun control measures across the country right now. Both pointed to the #NeverAgain movement started by survivors of the Parkland shooting to illustrate the power and energy young people can bring to the fight for change.

Since its inception in February, the movement has had tangible effects—on March 9, Florida Governor Rick Scott signed an array of gun limits into law, including legislation that raises the minimum age to purchase a firearm to 21.

“It’s really exciting,” Shafer-Ray said. “Bills like this are getting passed across the country. I’m very, very optimistic about the chances of these bills being passed in Massachusetts, too.”

“Those student voices are hard to ignore,” Vars said.