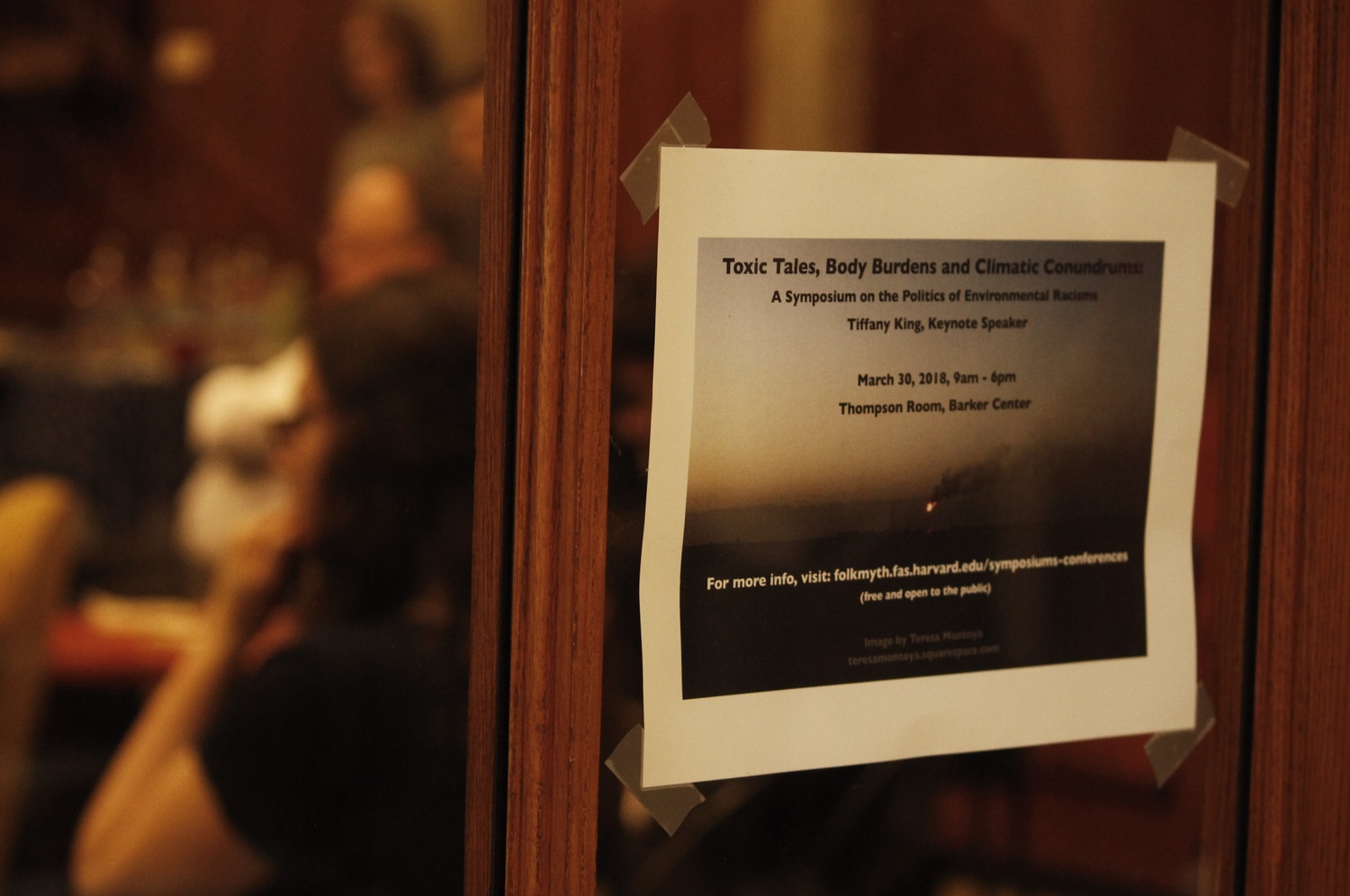 The Folklore and Mythology department hosted a symposium called Toxic Tales, Body Burdens and Climactic Conundrum in the Thompson Room on Saturday. By Kathryn S. Kuhar
By Aidan B. Carey and Karina G. Gonzalez-Espinoza, Contributing Writers

Speakers across academic disciplines discussed environmental “toxicity” and its relationship to racially marginalized segments of the population at a symposium held by the Committee on Degrees in Folklore and Mythology Friday.

At the event, titled "Toxic Tales, Body Burdens, and Climatic Conundrums," speakers ranging from professors to current students spoke about issues like climate change, ecotourism, and race relations. The speakers also discussed the representation of environmental issues in contemporary media and older works of folklore and mythology.

The symposium’s primary organizer and head tutor and lecturer in the department, Ruth Goldstein, said she chose the theme because of the enduring focus on environmental toxins in the news and because of her own experiences growing up in Baltimore, where lead paint contamination formed a central challenge for African American communities.

Environmental racism, which Goldstein defined as the disproportionate exposure of racially marginalized groups to environmental contamination coupled with a lack of resources or opportunities to address these problems, comprised a main topic canvassed at the symposium. Goldstein said she designed the event to be inclusive of scholars of color whose work and personal experiences would be especially relevant and valuable to the discussion.

As part of the day-long event, organizers also held a panel honoring Germanic Languages and Literatures and Folklore and Mythology professor Maria Tatar, who has previously taught popular classes at the College on fairy tales and children’s literature.

Tiffany L. King, an assistant professor at Georgia State University, gave the keynote address, speaking about cartography, the environment of plantations, and the significance of indigo dye production in the daily lives of slaves. King emphasized the importance of taking the time to interact with others in the field and the value of events such as Friday’s.

“This is kind of what makes the academic’s career—these intimate relationships where you get feedback on your work... your work gets workshopped, you get inspired,” she said.

The symposium draws on a class taught by Goldstein this semester, Folklore and Mythology 146: “Body Burdens: Toxic Tales and Politics of Environmental Racism," which focuses on both natural and social environments. According to Goldstein, interest in the class was so great that instructors had to create a second section—something unusual for the department. Several students from the class attended the symposium.

“[Goldstein] always envisioned this class as both the class and the symposium to complement one another,” attendee G. Miles Counts ’18 said.