In Both Spheres: M.D.-Ph.D. Students at Harvard

Enrollees say the ability to pursue vastly different disciplines, the close social connections forged through the M.D.-Ph.D. program, and later career benefits derived from holding two degrees render the challenging curriculum more than worth it.
By Shera S. Avi-Yonah and Luke W. Vrotsos 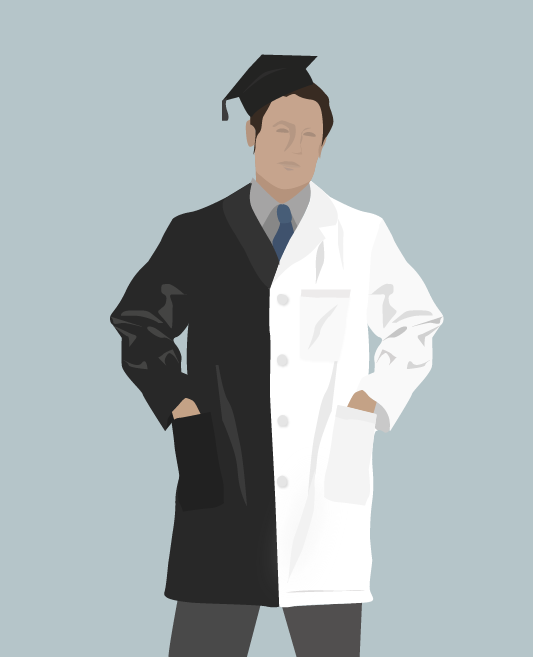 When Allison E. Hamilos took a neuroscience class during her second year of medical school, she had reason to be intimidated. Her classmates comprised both medical students and research-focused Ph.D. students.

For the medical students, Hamilos said, the class was “seen as [one of the] more challenging classes” in their curriculum.

But Hamilos loved it. One day, she went after class to talk to the professors.

After thinking more about that question, she said, she resolved to pursue a career in neuroscience research. Eventually, she decided to work toward a joint M.D.-Ph.D. earned at both the Harvard Medical School and the Harvard Graduate School of Arts and Sciences.

Hamilos is one of around 175 students currently enrolled in the University’s M.D.-Ph.D. program.

The dual degree is one of the University’s longest and most demanding programs and boasts an acceptance rate of 2 percent, allowing students to pursue doctorates in fields ranging from classics to chemistry while also completing clinical training. Enrollees say the ability to pursue vastly different disciplines, the close social connections forged through the M.D.-Ph.D. program, and later career benefits derived from holding two degrees render the challenging curriculum more than worth it.

FROM THE LAB TO THE LIBRARY

While completing two advanced degrees in just eight years is not an easy task, the program is structured to ensure that students complete all of their requirements.

Once accepted, students in the joint program are enrolled in Harvard Medical School and are guaranteed admission to a doctoral program in their area of interest at either Harvard or MIT.

The National Institute of Health’s Medical Scientist Training Program has sponsored M.D.-Ph.D. training at Harvard and MIT since 1974. The combination of NIH and institutional funds provides a full scholarship to dual-degree students who earn admission to the MSTP program. Current Harvard medical students can also join the M.D.-Ph.D. program and may receive at least partial funding to help support their dual-degree training.

For the past several years, the program has been structured on what is known as a “two-four-two” timeline—students spend two years at the medical school, four years at the graduate program of their choice, and then return to complete their M.D.

Loren D. Walensky, who boasts an M.D.-Ph.D. from Johns Hopkins, has directed the joint program since 2013. He said the transitions in and out of medical school courses typically form the most challenging points for students.

“You have to do a lot of things to get ready to go back to med school: you have to get your papers in order to be able to be published, you have to write and defend your thesis,” Walensky said. “All the while, you have to start re-learning and re-preparing to enter the clinical world, where you’ll be side by side with students who have been doing it continuously, so you have to be able to get up to speed.”

Ann M. Morgan ’13, who is pursuing a medical degree and a doctorate in biophysics, also said switching back and forth between medical and graduate studies is one of the most difficult aspects of the program.

“Basically, every time you get good at what you’re doing, you stop doing it and do something else,” Morgan said. “Just as you’re getting comfortable with the vocabulary of medicine in med school, then you stop and you go to your Ph.D.”

Because challenges like these are inherent in the dual degree program, the admissions committee looks for a highly specific set of credentials, according to Walensky. He said successful applicants typically show both a “commitment to clinical training” and “accomplishments in science.”

“They can convey information clearly,” he said. “They have leadership capabilities that convey that they have balance, that they can kind of work hard and play hard, that they really have multi-dimensional personalities and talents.”

A GROUP OF ‘NUT-JOBS’

When these students graduate from their joint degree, they’ll join a contingent of physician-scientists that occupy positions at the highest levels of the medical field.

Wolfram Goessling, co-director of the Harvard-MIT Division of Health Sciences and Technology, also holds an M.D.-Ph.D. He said it has helped bolster his research and administrative career. 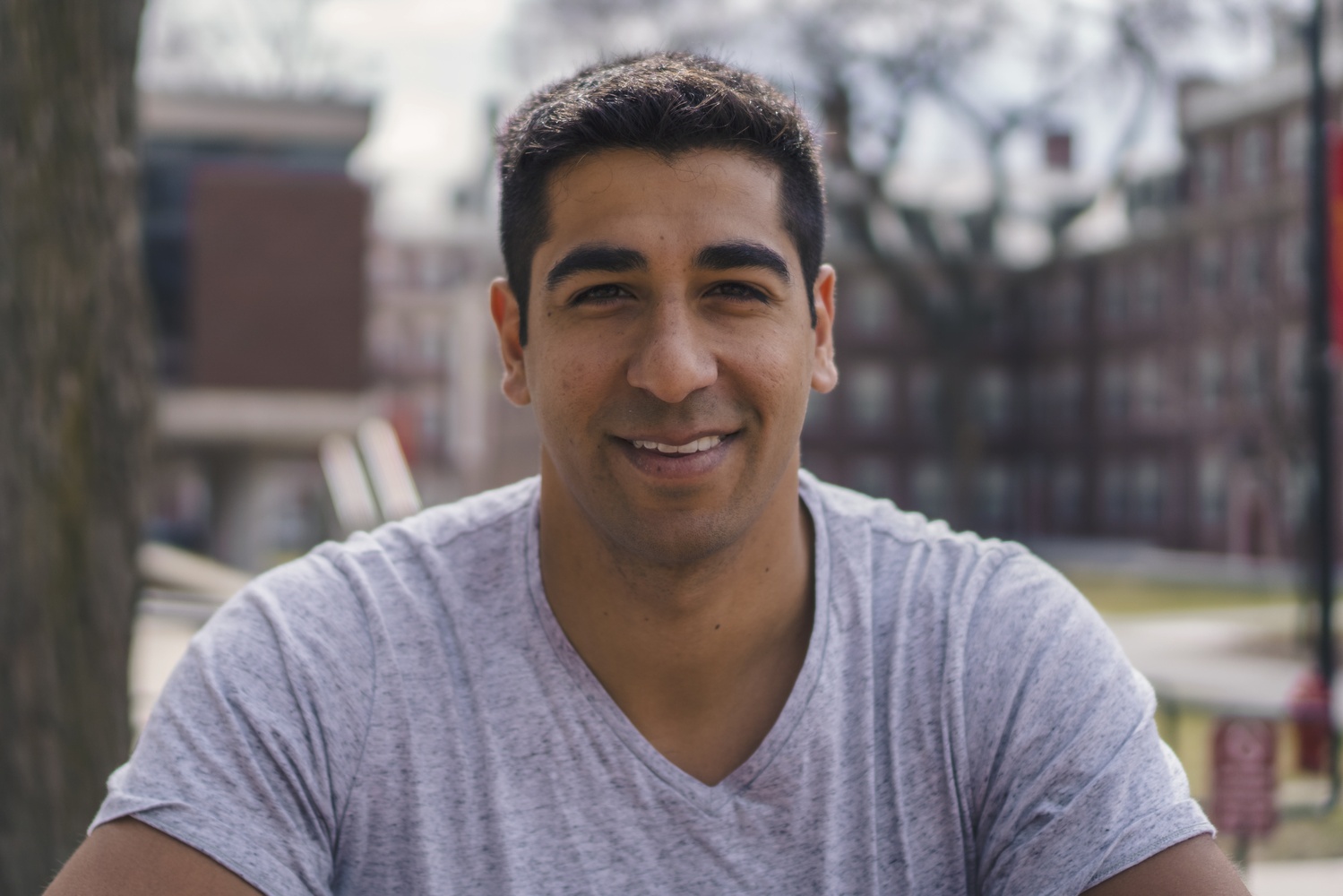 Senan Ebrahim '12, a former Quincy House resident and current tutor, enjoys a nice day outside in O'Donnell courtyard. Ebrahim is a current MD/PhD candidate at the Harvard Medical School and Graduate School of Arts and Sciences. By Justin F. Gonzalez

“For me, to be able to get rigorous training in basic science—in parallel and in connection with medical training—has been helpful to hopefully be effective and efficient as a researcher,” Goessling said.

“It gives them insight and qualifications that, in many ways, allows them to lead, because they know what’s going on in both spheres,” he said.

One further benefit to the program, according to some students, is its social element. M.D.-Ph.D. student Senan Ebrahim ’12, who is currently in his fifth year of the program, said that the rigors of the program allow students to bond.

“We got very close, because, in a way, what kind of nut-job would want to do this? We all have that vision for what our career is going to be like, that desire to help people in a particular way,” Ebrahim said.

Roughly 90 percent of M.D.-Ph.D. students in the joint program pursue graduate work in the sciences. But the other 10 percent—those that complete Ph.D.s in the social sciences or humanities—represent a growing portion of the program due to Walensky’s increased focus on funding interdisciplinary work.

In the past several years, an increase in both private and federal funding has allowed the program to double the number of admits interested in pursuing graduate work outside of the sciences, Walensky said. The most popular social science areas of study students pursue include medical anthropology, health policy, history of science, and economics.

Perhaps no student is a better example of this expansion than Katherine D. van Schaik ’08, who will graduate with her M.D. and a Ph.D. in Classics this year. Her dissertation focuses on “medical decision-making in Greco-Roman antiquity.”

To complete her thesis, van Schaik followed a path different from the typical M.D.-Ph.D. timeline. After two years each at medical and graduate school respectively, she returned for a third year of clinical work at the medical school. Most recently, she pursued research for her dissertation for three years and then completed a fourth year of medical school.

This spring, across less than two weeks, van Schaik will defend an honors thesis at the medical school and her dissertation at GSAS.

Walensky said managing the humanities, social sciences, and natural sciences tracks has been challenging during his time as director.

“One of the things we worked really hard on in the past couple of years is to streamline that,” he said. “So not only do our basic science students get accepted up front through one application process—now, nearly all social science students have the benefit of that as well.”

“She’s broken down a lot of barriers, from radiology, to classics, to religion. She’s forged her own path, and she’s the poster child for what’s unique about Harvard,” he said.