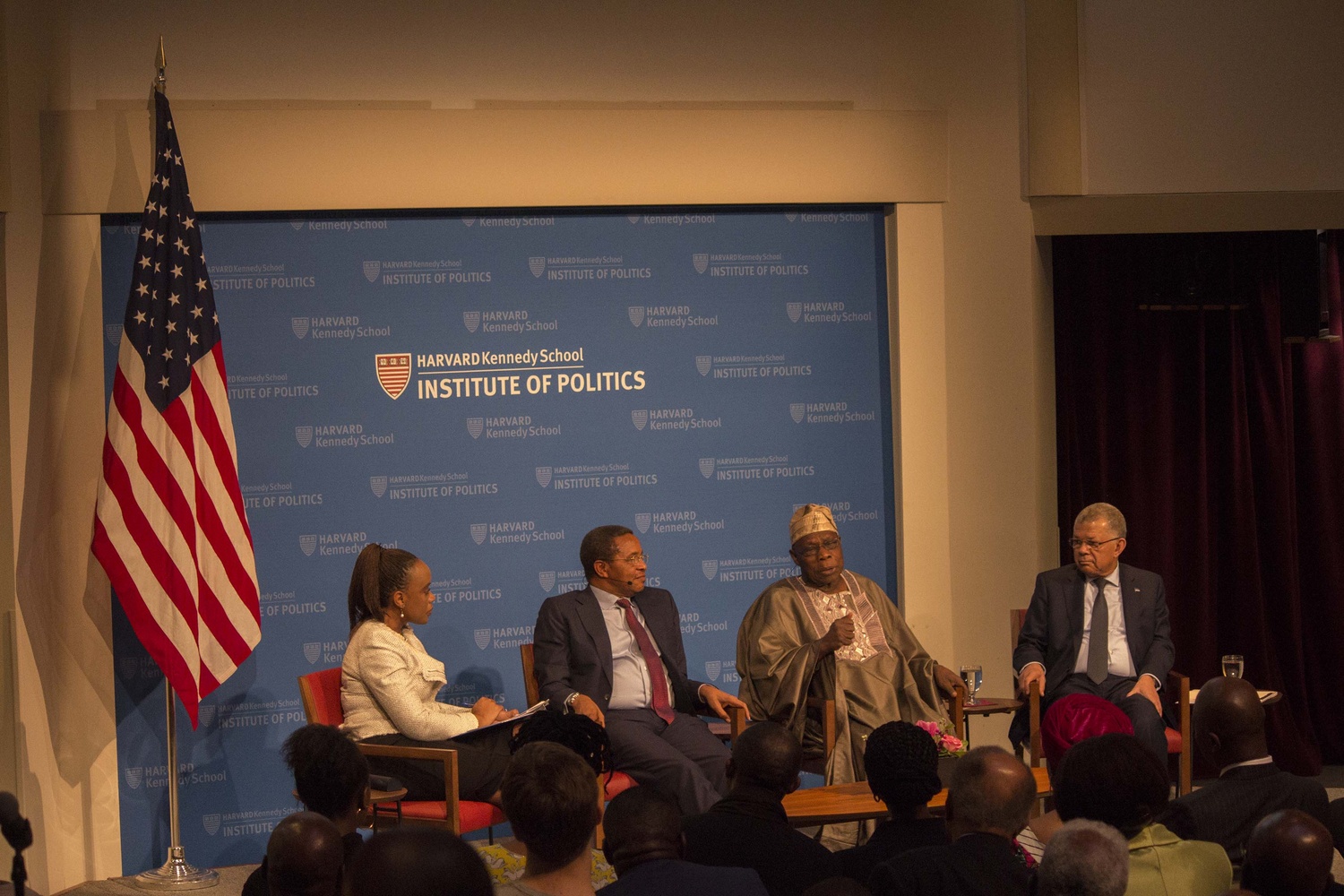 The former leaders of Nigeria, Tanzania, and Cape Verde spoke about effective leadership and development in Africa at a forum hosted in the Harvard Kennedy School's JFK Jr. Forum Wednesday.

Kennedy School Dean Douglas W. Elmendorf introduced the panel and paid tribute to the late HKS professor Calestous Juma, known around the world for his study of technology and innovation in Africa. Juma passed away last December. Elmendorf said Juma’s work around public policy on the African continent will continue at the school.

“Harvard University needs to play a significant role in promoting the scholarship about Africa and in building stronger connections between the United States and countries in Africa, and the Kennedy School intends to play a key part in those efforts,” Elmendorf said.

The speakers focused much of their discussion on what they view as the primary responsibilities of African leaders. Veiga said “commitment” is the most important quality of an effective leader.

Obasanjo flatly disagreed with Obama’s claim and called the president's assessment of Africa was “wrong.”

“Whatever context it is in, it is wrong,” Obasanjo said. “Africa needs good, strong leadership and we need stable, strong institutions. It’s neither one nor the other.”

Kikwete said he was “in total agreement” with Obasanjo’s diagnosis.

“That’s precisely the point, you need both,” Kikwete said. “If you have a strong leader and weak institutions, then they will be depending on an individual for survival and decision-making, which is a very weak base for a country.”

“If you have weak leaders, they are not good resources,” he added.

Obasanjo referenced the leadership of former South African president and activist Nelson Mandela as a role model for African leaders and citizens, pointing out how Mandela forgave those who imprisoned him for more than 20 years.

“I think that requires something more than normal in human beings to be able to do that. I think we need to learn that from Mandela and we need to practice it,” Obasanjo said. “Forgiveness is one thing that we don’t get enough in our interaction with our fellow beings. I believe whether at personal level or at political level or at whatever level: forgiveness and love.”

Some audience members said they wished the discussion had contained more substance and directed questions.

“I think there wasn’t enough substance,” Graduate School of Design Student Kahira Ngige said. “We didn’t get to the heart of what I wanted to know, which is what we do about the problem of governance across Africa. I think it was interesting to an extent, but more could have been done.”

The forum followed a closed workshop discussion about Africa’s transformations in the 21st century held among the three leaders and various experts and policymakers.