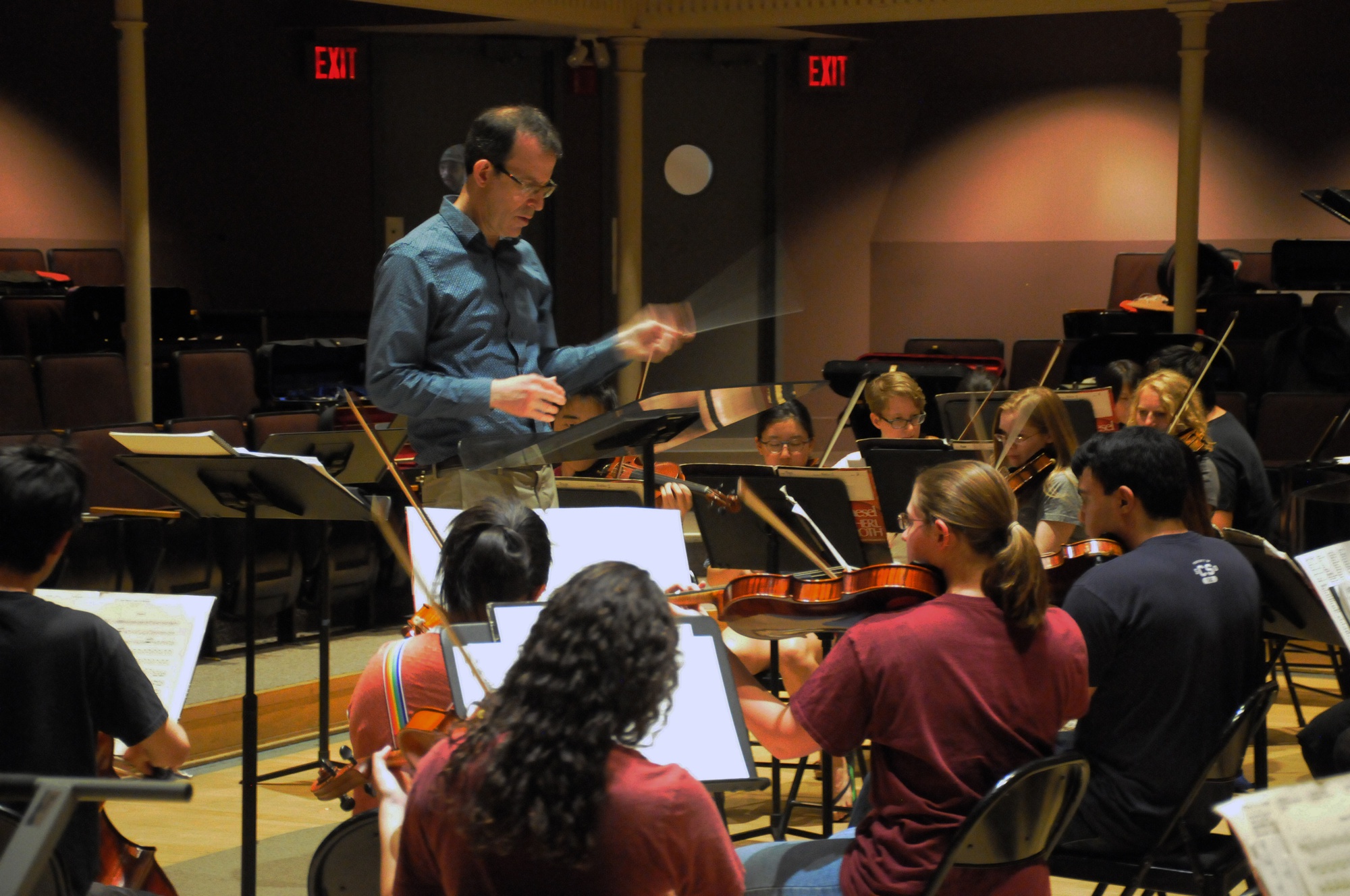 He’s been involved with the Hasty Pudding Theatricals since his freshman year of college. “I would have to actually count how many years that is,” he says. After taking a moment to tally, he calculates that this is his 36th year.
By Madeleine M. Joung

Undergraduates who participate in a club for all four years at Harvard can cite longevity as a mark of their dedication, but Allen G. Feinstein ’86 puts them all to shame.

He’s been involved with the Hasty Pudding Theatricals since his freshman year of college. “I would have to actually count how many years that is,” he says. After taking a moment to tally, he calculates that this is his 36th year.

Music was always an important part of Feinstein’s life. He learned how to play the recorder before he reached kindergarten and expanded his horizons to include “a whole bunch of wind and brass instruments when I was in high school. And piano.”

When Feinstein arrived at Harvard his freshman year, he translated that enthusiasm for music into extracurricular activities like the Harvard University Band, the Harvard Wind Ensemble, and Hasty Pudding Theatricals, where he played clarinet, saxophone, oboe, and trombone.

By the time he was a college sophomore, Feinstein was listening to recordings and transcribing full scores for the Hasty Pudding’s pit orchestra—by hand, because, as he notes, “this was pre-computers.” By breaking down scores and seeing how the parts came together, he learned how arrangements and compositions work. He began to write arrangements for the Harvard Band’s halftime shows, and, by his junior year, he was creating orchestrations for the Hasty Pudding’s pit orchestra.

Academically, Feinstein’s undergraduate experience was “wonderfully unfocused,” he says. “I changed majors so many times that I wound up completing a concentration that doesn’t exist anymore, that I kind of completed almost by accident—called Physical Sciences, because I was a science kind of guy. But I spent all my time doing music.”

Feinstein later went on to graduate from the New England Conservatory of Music, but he remained involved with the Harvard arts community, composing multiple commissioned works for the Harvard Wind Ensemble and continuing to conduct and arrange music for the Hasty Pudding. He recalls one kickline in which he blended the composer’s Transylvania-themed score with Bach, but in the style of Michael Jackson’s “Thriller,” all for a cast of dancing zombies.

Feinstein now works as a teaching professor and director of bands at Northeastern University, where he is also the head advisor for the music department. In addition to maintaining his involvement in the Pudding and working a day job in academia, he has continued to expand his musical horizons: he’s now also the conductor for the Harvard Pops.

“For the Pops, I was hired about 20 years ago,” he says, leaning against a wall just outside of Lowell Lecture Hall, where the Pops practice every Tuesday from 4 to 6:30 p.m. Inside, approximately 15 members of the Pops have arrived early to set up, and the resounding acoustics of the hall ensure that the clanging of music stands and scraping of chairs punctuate his words. “I was told all I would have to do was show up and conduct, because they would take care of everything else.”

One member of the Pops hiring committee was Peter G. Chan ’99. About 15 years later, Chan asked Feinstein and the Pops to assist him with his flash-mob proposal on Harvard’s campus.

Chan brought his soon-to-be-fiancée to Lowell Lecture Hall, which was vacant, and sat down to play a seemingly spontaneous rendition of a Rachmaninoff piano concerto. Mid-movement, Feinstein and the Pops rushed in and provided background accompaniment for a particularly dramatic section, before scurrying out again. The New York Times documented the whole scene on video and featured it in the Style section.

Feinstein’s continued Harvard involvement has also given him other high-profile opportunities over the years, including the chance to conduct performances for the Hasty Pudding’s Woman of the Year ceremonies, honoring celebrities like Lucille Ball and Glenn Close.

This member of the old guard has stayed with the Pudding long enough to witness the beginning of its upcoming transformation. Asked for his thoughts on the Hasty Pudding’s new policy permitting women to audition, Feinstein declines to comment. He later addresses the issue briefly in an emailed statement, writing that “this year, my conversation about [the Hasty Pudding’s creative] process with Mila Kunis quickly got sidetracked into a discussion of the show’s casting policies, just about an hour before the Pudding announced the change in casting that will begin next year.”

As the organization adapts, Feinstein hopes to continue his involvement, even if the group looks different than it did when he was an undergraduate. Working with Harvard students, in fact, has helped him with his own projects. “I’ve learned a lot through that organization [the Hasty Pudding] on how musicals work, and I apply that to my own musical work,” he says. “The process all around is just very stimulating.”