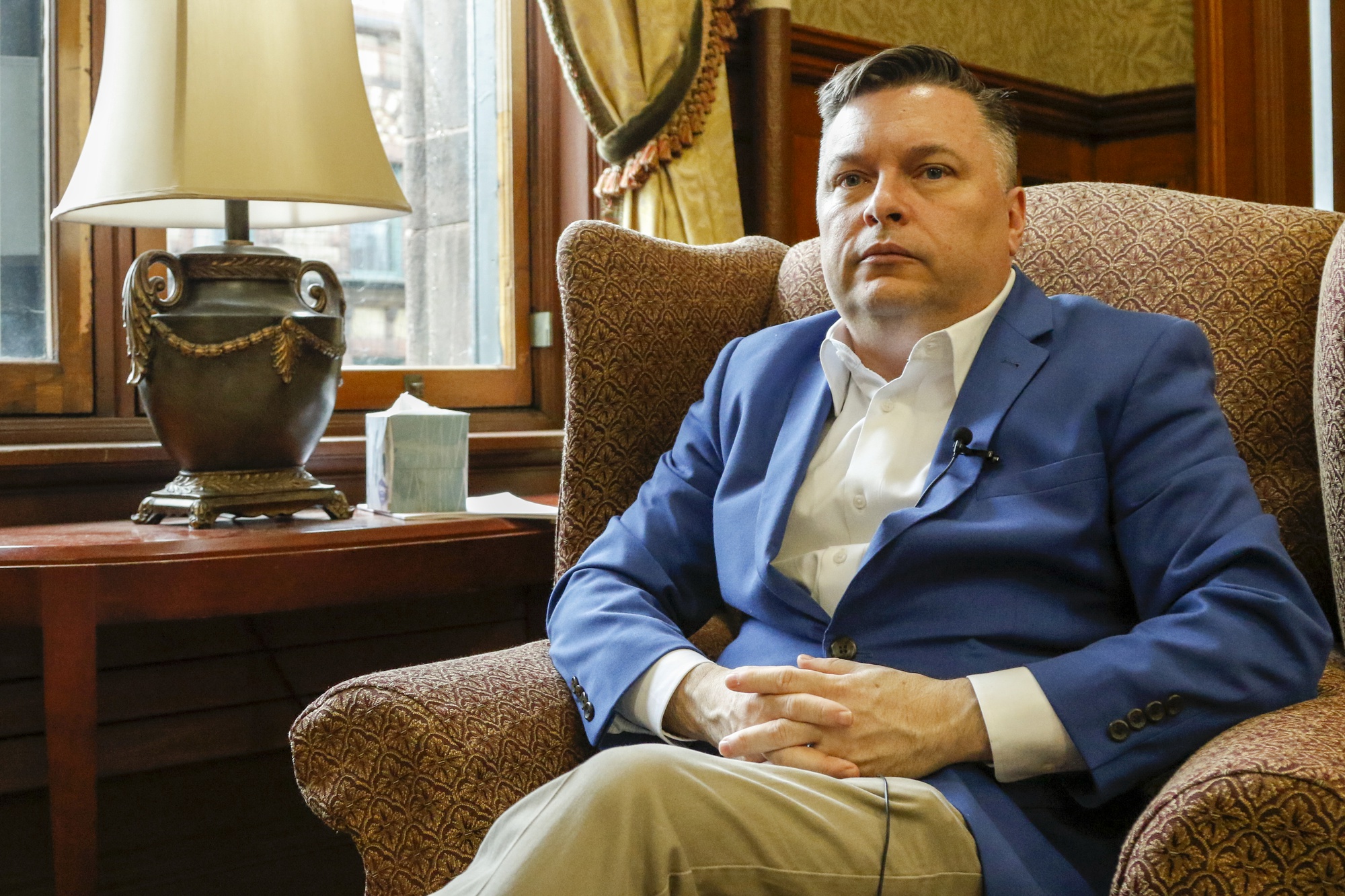 “As a team, we were a true representation of the Cambridge community,” McGovern said in the address. “We were proud of our diversity and our common goals.”

“When I thought about what I wanted for us moving forward, that team name kept coming to mind. Cambridge United,” he added.

Calling on his youth experiences as a Cambridge United soccer player, McGovern said he has a vision to bring Cambridge residents together.

“My goal for this term is to really move Cambridge to being a much more socially and economically just community,” McGovern said in a May interview. “I talked in my inauguration speech about Cambridge United because sometimes I feel that we don’t always live the progressive values that we say that we have.”

McGovern’s first 150 days have kept him busy. Already, he has grappled with what many consider an “affordable housing crisis” in the city and responded to an arrest of a black Harvard student by the Cambridge Police Department that sparked allegations of police brutality.

McGovern has lived in Cambridge his entire life, describing himself as “Cambridge-centric.”

At times, Cambridge can seem divided, McGovern said. He said residents of the city experience vastly differing rates of social and economic mobility, likening the situation to a “‘Tale of Two Cities.”

“You have Harvard and MIT, Google and Facebook and Amazon—all these multi-hundred million dollar institutions and companies,” he said. “But we also have a poverty rate that’s higher than the state average, death by overdose has doubled in the last year, and we have upwards of 500 people in our streets and in our shelters who are homeless every night.”

Yet according to McGovern, Cambridge is in a unique position to change the disparities amongst its residents.

“Next to my family, it’s everything. I love this city. I’m not the most well-travelled guy, but I’ve never wanted to live anywhere else. What I love about this city is that we’re not perfect, but we’re willing to work to be perfect,” he added.

McGovern’s co-workers on the Cambridge City Council—who were responsible for electing him into office—attest to his love of the city.

Wilford “Wil” Durbin, the mayor’s chief of staff, said that McGovern’s “compassion” is his driving force.

“Whether it’s with working with people that are homeless or people that are suffering from the opioid epidemic, I think compassion is the number one lens that he views everything through,” Durbin said.

McGovern knew from the start that one issue would dominate his two-year term. All 26 candidates that ran for Cambridge City Council this past November promised to address one of the city’s most pressing issues: affordable housing.

The nine elected members of the Council including McGovern now have the opportunity to live up to their campaign promises. McGovern, who has dealt with housing policy throughout his time in public office, called the city’s lack of affordable housing a “supply and demand issue.”

“A city needs to get to a vacancy rate of 5.5 percent. When you hit 5.5 percent of available apartments, you start to see rents come down. Cambridge was at about a little under 2 percent a couple years ago, we’re now at about 3 percent,” he said.

Throughout Cambridge’s history, Mcgovern said, the city's diverse population has formed as a result of changing industries. Historically, a host of workers from farmers to candy-shop owners to firehose producers have called Cambridge home.

More recently, biotech and pharmaceutical companies have been flocking to Cambridge—especially Kendall Square. Yet McGovern said that the innovation industry’s arrival could mean the outbidding of other residents—and the challenge of preventing such displacement.

“Those people are coming whether people in Cambridge want them to or not. And they’re making good salaries,” McGovern said. “They’re either going to outbid a teacher for the apartment that’s currently available or you have to supply more housing.”

Even as Vice Mayor last year, McGovern worked to mitigate the effects of the affordable housing crisis. In April 2017, the City Council unanimously passed an ordinance raising the percentage of units that developers are required to set aside as affordable from 15 percent to 20 percent. 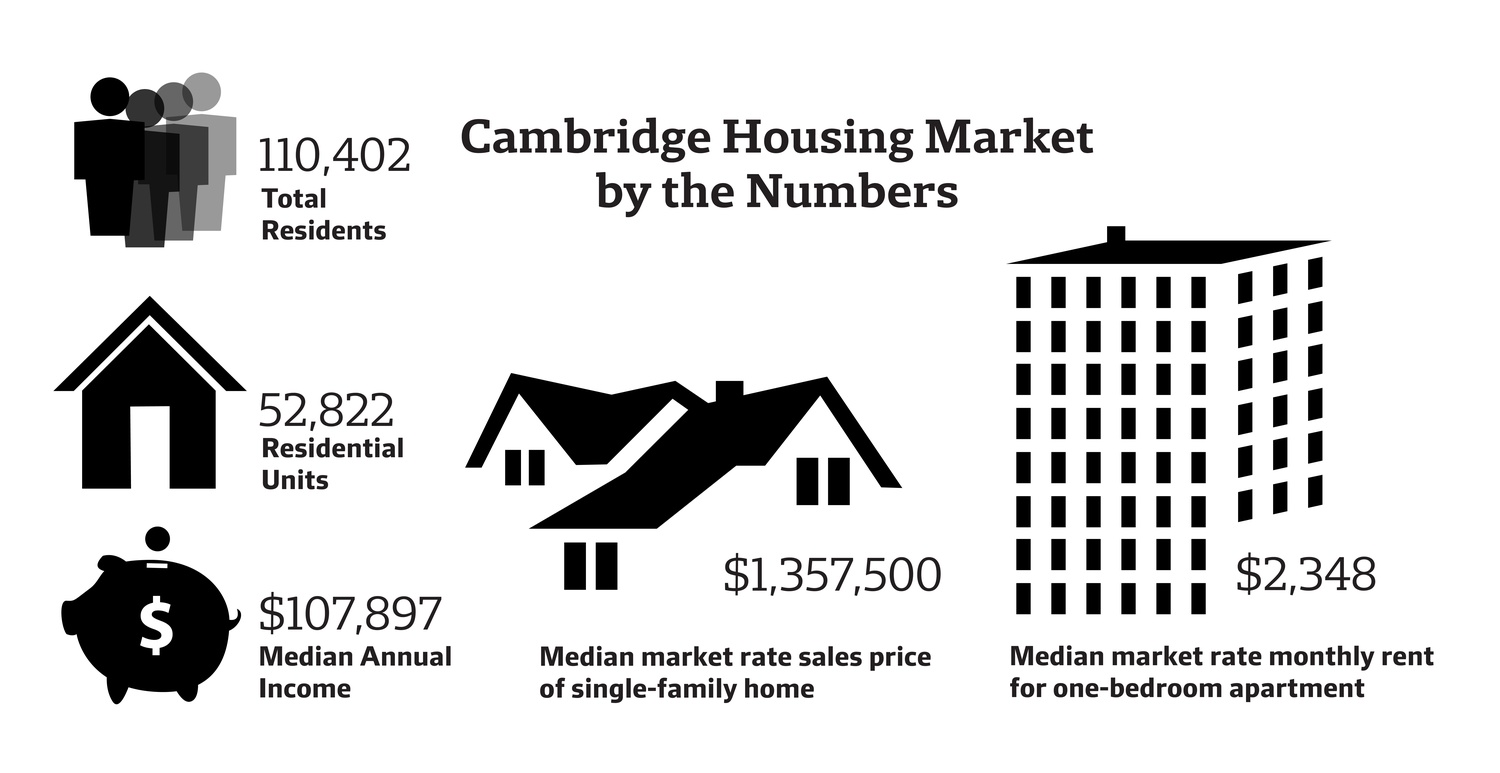 The City Council also recently raised incentive zoning that requires commercial developers to pay a contribution towards affordable housing for every square foot in their new building. According to McGovern, the contribution amount now sits at $15 per square foot, which is “generating millions of more dollars” that the city can use to fund housing.

McGovern also suggested that Harvard and MIT could potentially help alleviate high demand on housing. Without incentivized housing from universities, graduate students often search for market rate housing, which may prevent residents from entering the market, he said.

“If you have four graduate school students that want to rent a 2 bedroom apartment and they double up, and they’re willing to pay $1,000 each, and that landlord can get $4,000, a family can’t compete with that,” he said.

As Cambridge works to increase the available affordable housing stock, McGovern said there are steps the city can take in the meantime to mitigate the inaccessibility of existing housing. He suggested the possibility of a “gap voucher” which would pay for the remaining rent not covered by income or federally subsidized funds like Section 8.

“With the ceiling for Section 8 and the floor for market rent, there’s a gap. So even people with housing vouchers cannot afford market rent housing in Cambridge,” McGovern said.

While addressing the affordable housing crisis was a foreseeable task for McGovern, the forcible arrest of a black Harvard undergraduate last month unexpectedly brought Cambridge into a national debate over race and policing.

On April 13 Cambridge Police Department officers arrested the student, who was standing off-campus—outside of the area over which Harvard University Police Department has primary jurisdiction, though only feet from Harvard Law School.

After CPD officers arrived at the scene, they spoke briefly with the student, who was naked and likely under the influence of narcotics, before one officer tackled the student to the ground and delivered five punches to the student’s stomach in an effort to handcuff him, according to a CPD police report.

In a video of the incident later published by CPD, the student can be seen standing still, surrounded by four officers, while the officers talk to him for several seconds. The student then turns around and takes two steps towards one officer before taking a step back and raising his arms to chest-level. Another officer then tackles the student from behind.

Hours after the arrest, the Harvard Black Law Students Association released a statement calling the incident an example of “police brutality.” In the following weeks, University affiliates met to process and protest the incident, and University President Drew G. Faust announced the formation of a committee to review the events leading up to the arrest.

Three days after the arrest, McGovern released a statement calling the arrest "disturbing."

“We have high standards for our police officers in Cambridge,” the statement read.

Earlier this month, McGovern came to Harvard to speak at an event in Sever Hall and took questions from students, including a question about the arrest.

In his response, he questioned the use of force used by CPD in the arrest, specifically the decision to punch the student.

At the event, McGovern also spoke about how CPD was “pissed” at him for his response to the incident. In an interview last week, McGovern said that he think his relationship with Cambridge is “fine” and that the police commissioner was “very supportive,” though he continued to describe the event as “disturbing.”

McGovern also said he wants to ensure the police continue to hold themselves to a high standard.

“It’s all about making sure we have a police department that is responsive to the community, respectful of the community,” McGovern said. “That’s not to say that we don’t have that now, but you always need to self-evaluate.”

Going forward, McGovern said he hopes to hold a “community meeting” with Harvard affiliates to discuss the incident and how the city can learn from it.

“I’ve committed to holding a community meeting that will include Harvard and Harvard students in the fall—maybe not necessarily to talk about the incident specifically, but really to talk more about how do we grow and learn from what happened and what are our policies and how do we get better,” McGovern said.