In Short Supply: Women in the Economics Department

Many graduate students and faculty applaud these efforts for adding needed diversity to the department and improving departmental climate, some female department affiliates say it remains a challenge to constitute a minority in their field.
By Paula M. Barberi and Cecilia R. D'Arms 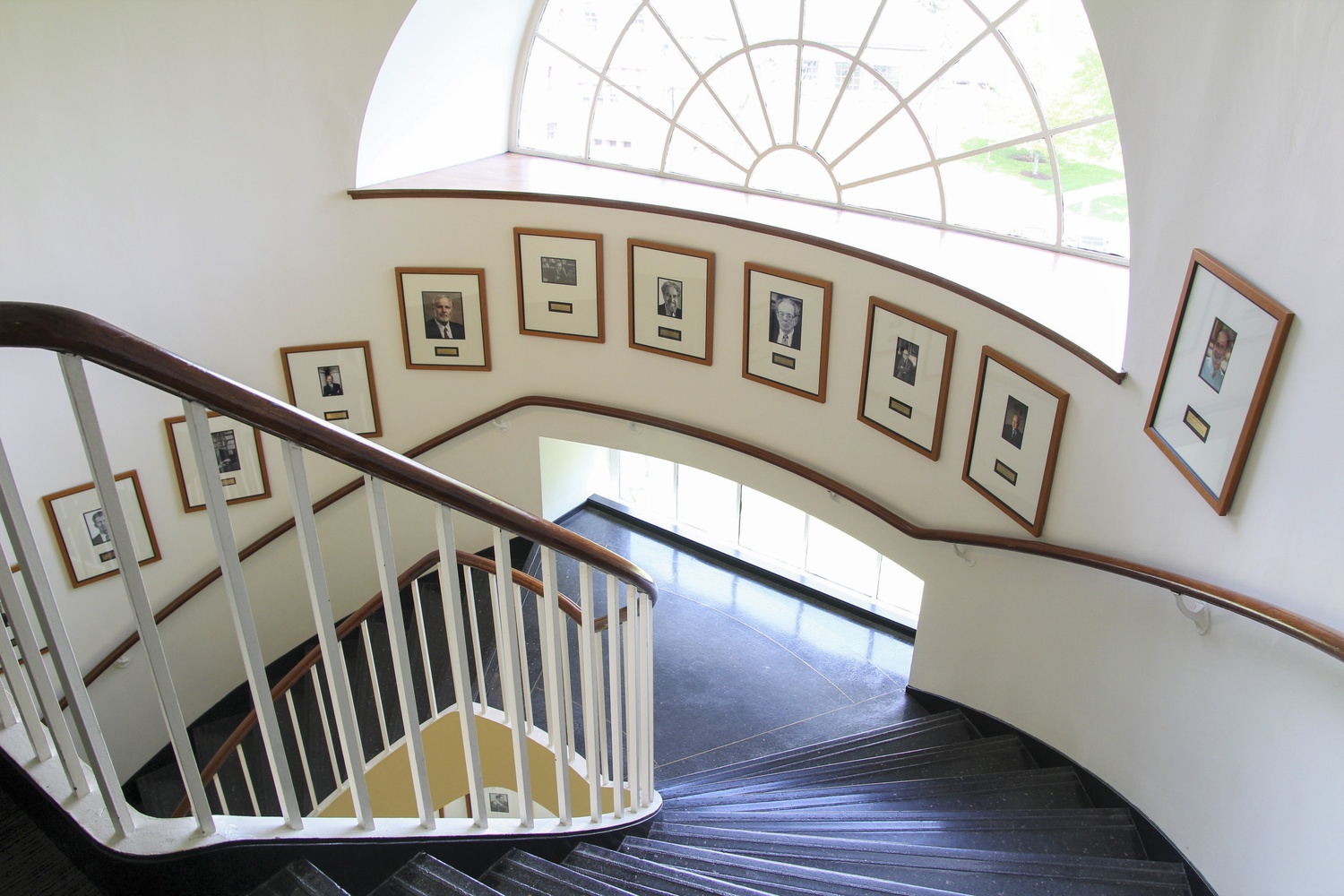 Portraits of faculty members from the Department of Economics line a staircase in the Littauer Center. By Krystal K. Phu

She received tenure at the University of Pennsylvania in 1985 before coming to Harvard in 1990. She also held a visiting fellow position at Princeton, where she was the only female economist who had already received tenure in their department at the time.

While the role of trailblazer was familiar to Goldin, she said her arrival in Harvard’s Economics department—long lauded as one of the world’s best and the source of 10 Nobel laureates—was met with unusual attention.

“This has been a very important issue and I've been thinking actively about the question of diversity and what we can do to improve a frustratingly low level of diversity in this department,” Laibson said.

Many graduate students and faculty applaud these efforts for adding needed diversity to the department and improving departmental climate, some female department affiliates say it remains a challenge to constitute a minority in their field.

'FALLING OUT OF THE PIPELINE'

“Women shy away from Economics before they even come to Harvard, before their parents put their bags in the car, or plane, or train,” Goldin said. “There is simply a paucity of women in economics.”

Economics is consistently the College’s largest concentration, but only 35 percent of undergraduate economics concentrators at Harvard are women, according to Laibson. Forty-eight percent of students at the College are female.

Laibson said the Harvard average is slightly higher than the national average of two men for every woman in economics.

Goldin said the reasons for this discrepancy are not well understood. However, she and Karen E. Dynan, a Professor of the Practice with an appointment in the Economics Department, said that at the undergraduate level, women are less likely to concentrate if they see economics as leading exclusively toward careers in finance. 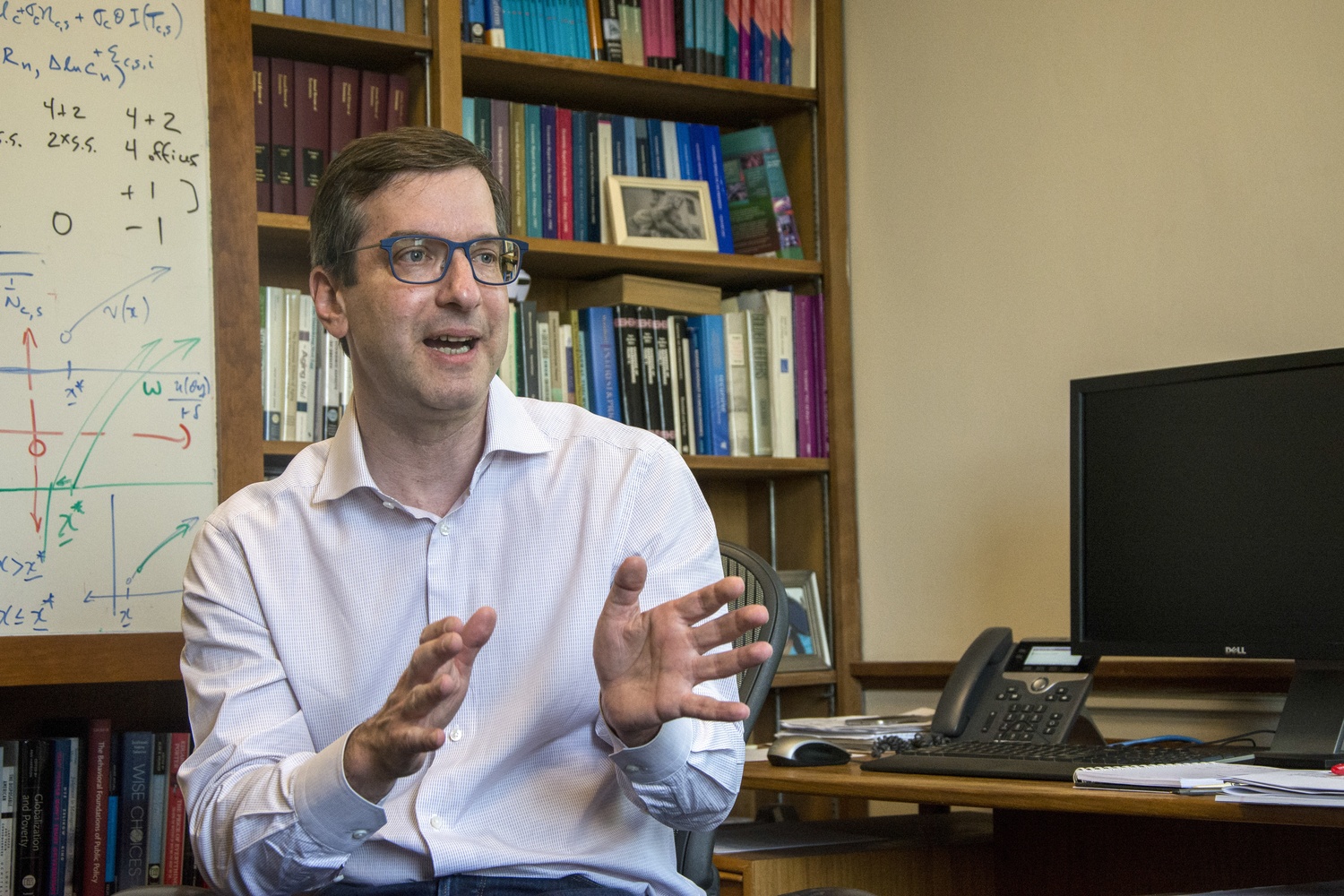 David I. Laibson '88 is Chair of the Economics department. By Awnit Singh Marta

“You are more likely to find women in applied micro fields like labor, and macro and finance are very male-dominated.” Dynan said.

“If you want to attract more women, then tell the parents and their daughters and sons that economics is more than finance,” Goldin said.

Some students said that Economics 10: “Principles of Economics”—a large introductory course which is many undergraduates’ first formal exposure to economics—fails to explore the diversity within the field, however.

“I wanted to do development economics, and gender equality in developing countries,” Alice S. Rossmann ’19 said of her experience in Economics 10. “But we didn’t really talk about development economics. You could probably take it as an elective, but it’s not taught as, this is one of the core things about economics.”

Mayerly Smith ’20 agreed that the class was overly focused on finance.

”I’m pretty sure at the start of the class, [the professor] was saying reasons for why you should take the class, he’s like, ‘Oh, you get a fancy job at Goldman,” she said, referring to Goldman Sachs, a leading investment bank.

Economics professor N. Gregory Mankiw, who teaches Economics 10, wrote in an email that he “gives a large emphasis in Ec 10 to the role economists play in public policy,” specifically through guest speakers who provide a variety of perspectives.

Laibson said he guest lectured in Mankiw’s course on behavioral economics this fall, and praised the guest lectures for providing a “window” into “more advanced and more interesting” aspects of the field.

Out of 12 guest lecturers this year, though, only two were female, according to the course’s syllabus.

Laibson said his department is trying to measure “where women are falling out of the admissions pipeline” in the upper echelons of economics.

Despite the absence of women in senior levels of the department, some female graduate students described their experience as entirely positive. Even those who did, however, said that greater female representation would improve the department.

“The notion that increasing the number of women in economics would lower the quality of the field is a widely held belief in the profession,” said Ellora A. Derenoncourt ’09, a Ph.D. student in the department.

Since there are only eight women on the department’s teaching staff, female graduate students said they find themselves with male mentors and advisors more often than not. Laibson said he is aware this situation is not ideal.

Doctoral student Jessica Liu, along with several other female graduate students, said it can be difficult to have their opinions taken seriously when they are the only, or one of the only, women in the room.

The Littauer Center for Public Administration houses the Department of Economics. By Krystal K. Phu

“It’s quite a stressful environment and currently it is a lot more male-dominated. I think it’s sometimes easier for men to be a little bit more confident sometimes, and a little bit more aggressive or willing to debate more than others,” Liu said.

Derenoncourt expressed similar concerns over who tends to dominate discussions within the room.

“You can often be in seminars and classes and be one of very few women or the only woman. The dynamics are noticeable in who speaks but also more potently in who is there,” she said.

After receiving Ph.D.’s, the struggle to be taken seriously as a female economist can continue. According to a study by Ph.D. student Heather A. Sarsons for her dissertation, women who coauthor economics papers with men get less credit for the paper than their coauthors.

For example, in 2015, a New York Times reporter wrote that a study for which Goldin was the first author was written by Lawrence Katz, and that Goldin “co-wrote” the paper.

Alice H. Wu, who will enter the department this fall as a Ph.D. student, reported in her undergraduate senior thesis that discussion surrounding female economists on popular online forum “Economics Job Market Rumors” is typically focused on their personal information and physical appearances, whereas discussion about male economists focuses on their work.

Some female students who are women of color said the sense of being marginalized in the department is heightened due to their racial and ethnic minority status, but that it’s also complicated explaining this to their white peers.

“I just think a lot of times it’s a little hard to explain why it’s harder to be a woman of color in a certain way. Those kinds of things don’t always translate to people who aren’t women of color in the ec department, which are most people in the Ec department,” Smith said.

Derenoncourt said the historic lack of diversity in the department is illustrated by a wall of portraits of former economics professors that hangs in the Littauer Center, which houses the department’s offices.

“Every single one of the 40 to 50 portraits is of a white man,” she said. “They are the legacy of our department faculty’s entirely male history, with the exception of staff and administrators. We could pick a different way to decorate the walls, but I would take an increase in the number of female faculty and female grad students over that gesture any day.”

She said that, as an additional reminder of this legacy, some of the women’s bathrooms in Littauer are converted utility closets.

For economics Ph.D. student Natasha R. Sarin, one good adviser helped her overcome her reservations about the field.

Sarin said she was “nervous” about pursuing Economics because she wasn’t confident in her abilities in math, but her adviser told her she was “crazy.”

“He told me that was crazy, and that being an economist is more that just being really good at math. He said there are different kinds of economists and told me, ‘I think you’re gonna be a great one,’” Sarin said.

Laibson said he wants to hear more stories like this.

At the undergraduate level, he said it is important to expose students to the diversity of fields available within economics, especially through College-wide events to target women who may have written off economics because they didn’t know everything they could do in the discipline.

At the graduate level, Laibson said the department is trying to correct for implicit bias in the admissions process through blind research reviews and by emphasizing research rather than interviews during the application process. He also said Goldin has created a pre-doc program for undergraduates considering graduate school.

The graduate students themselves have also formed a student government in the past two years, which has a Women in Economics subcommittee that has conducted climate surveys of graduate students and works to support women within the department.

Among the faculty, Laibson said he wants to encourage the department to conduct more “broad” and “creative” searches for hiring, which he says should bring more women into the conversation.

Dell, whose promotion was approved May 15, focuses on economic development, primarily in Latin America and Asia, according to her faculty page bio. Pallais studies discrimination in the labor market, particularly against women and other socially disadvantaged groups, while Stantcheva focuses on the tax system.

Laibson said the department was “ecstatic,” and called all three women “superstars.” Despite these signs of progress, however, he said there’s no “magic bullet” to diversify a historically homogenous field.

“I think this will only change if there are a lot more women in the profession,” Derenoncourt said. “The single most important solution would be to admit more women, hire more women, and tenure more women so as to change who actually is in economics.”