Stinks to BU: Game of the Year

Three career games from three of the team’s most important players would bode well for any squad, but as it turned out, the Crimson would need every bit of individual brilliance from Anderson, Cheek, and Cuccurullo, and then some, on that chilly March night at Harvard Stadium.
The Crimson delivered 33 shots on goal against BU, with senior midfielder Joe Lang responsible for five shots. Lang missed just one of those attempts and added five assists in the victory. By Henry Zhu
By George Hu

In terms of individual performances, Harvard men’s lacrosse’s encounter with Boston University had it all. A career high in goals for the Crimson’s leading goal scorer, sophomore Kyle Anderson. A career high in points for its leading points getter, senior Morgan Cheek. And not to mention, a career high in faceoff wins for its rookie faceoff specialist, Steven Cuccurullo.

Three career games from three of the team’s most important players would bode well for any squad, but as it turned out, the Crimson would need every bit of individual brilliance from Anderson, Cheek, and Cuccurullo, and then some, on that chilly March night at Harvard Stadium. 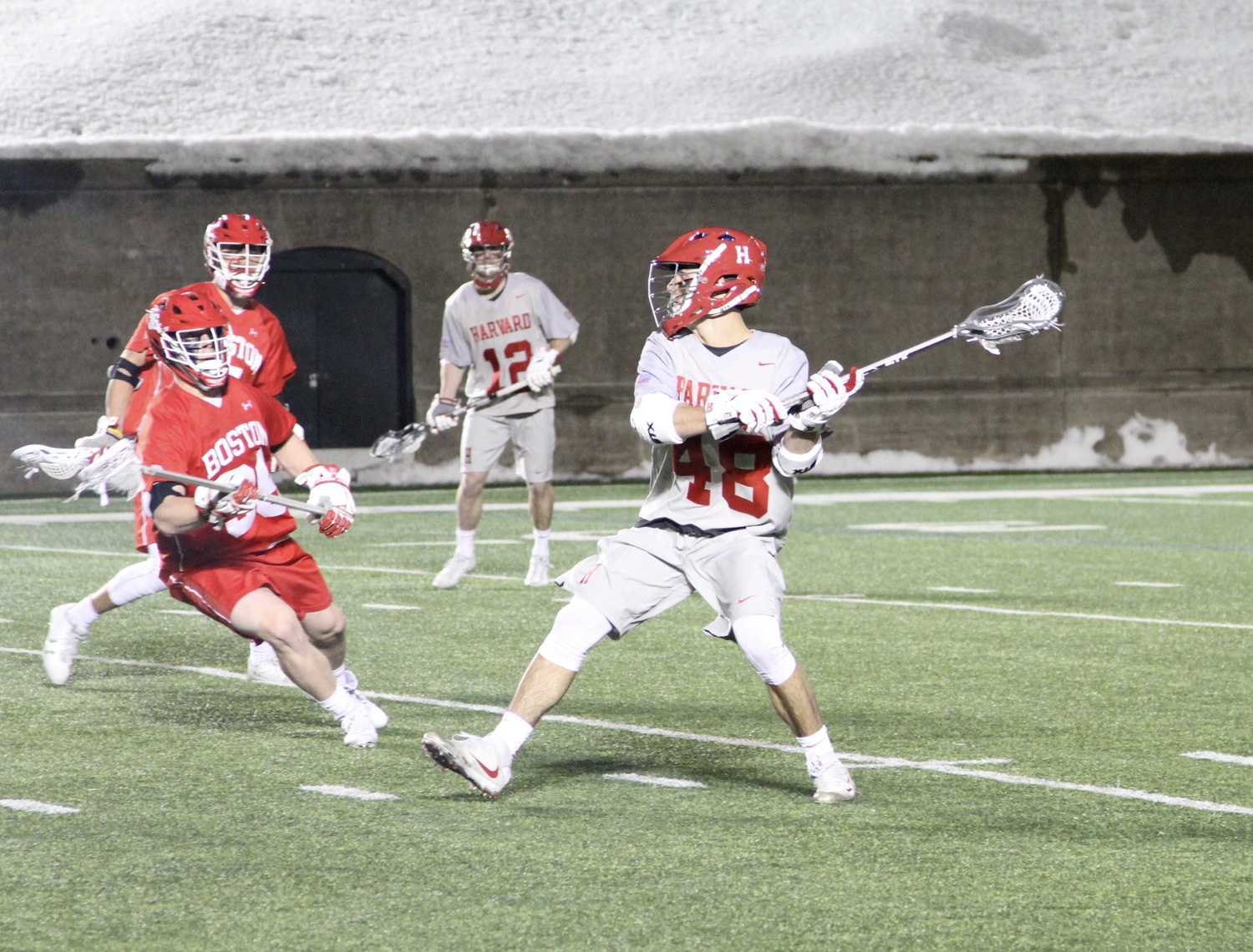 With just seven minutes remaining in the game, the Crimson found itself trailing 18-12 to its crosstown rivals. Terriers attackman James Burr had just rifled two shots past Harvard senior goalie Robert Shaw in the span of 17 seconds, appearing to snuff out any thoughts of a comeback by the home side. Those two goals were enough for Burr—BU’s leading goal-scorer on the season—to match his career best as well.

On the ensuing faceoff, however, the Crimson came up with the exact response it needed. Cuccurullo won possession and quickly dumped the ball off to Cheek, who fired the ball past Terriers sophomore goalie Joe McSorley at the 6:59 mark. Just seven seconds had elapsed since Burr’s goal, and after another faceoff win by Cuccurullo, the comeback was suddenly on again.

“We weren’t going to let up, and we knew the shots would go our way at some point,” Cheek said. “One, two quick scores and it’s game on.”

Game on, indeed, as Harvard pulled closer at 18-14 on the very next possession. Anderson provided the finish while Cheek supplied the assist, and at the 5:38 mark of the fourth, the Crimson was once again within striking distance.

However, BU won the next faceoff and with it a chance to milk the clock. Milk it they did, but when the time came to put the game away, a shot from senior attackman Ryan Hilburn clanged off the post and Harvard senior midfielder Carney Mahon picked up the ground ball.

After a penalty by the visitors, the Anderson-Cheek combination struck again at the 3:13 mark. Anderson had already set a new career high in goals by this point with five, but he was not finished. He connected twice more in the subsequent two minutes to bring the Crimson within one score at 18-17, capping off a personal 4-0 run with a well-placed bouncing shot from a tight angle.

“Those are the shots that go in for you during practice, but usually not in the games. Thankfully, those were working for me tonight,” Anderson said after the match.

Then, riding all of the momentum, Harvard scored the goal which, by that point, seemed inevitable. Co-captain midfielder Joe Lang finished off clever team play with 0:48 left on the clock, and just over six minutes after Burr had fired the Terriers ahead by six, the contest was back at square one.

"Those are the shots that go in for you during practice, but usually not in the games," sophomore attacker Kyle Anderson said.

Cheek went on to put the finishing touches on the historic win in overtime, scoring the game winner one minute into the extra frame with a running, over the shoulder shot. As soon as he saw the ball ripple the back of the net to secure the 19-18 victory, Cheek threw his stick up into the air in celebration while teammates streamed towards him from across the field and off of the bench.

“Our guys, to be able to pull off that kind of win just goes to show the character we have on the team and the never-say-quit attitude,” said Crimson coach Chris Wojcik ’96. “A midweek night game, and everything seemed to be going right for BU. We could have given up on the game, but we didn’t.”

At the end of the day, players on both sides had put too much into the game not to fight and claw until the very end. In addition to Anderson, Cheek, Cuccurullo, and Burr, three other Terriers players set or matched career highs in at least one offensive category, and Lang set a new career high with nine points as well.

As could be expected in such a tight game, the two sides were nearly evenly matched in faceoff wins and ground balls. Both teams put together multiple runs over the course of the contest that alone would have been enough to decide the outcome of most games but with the two offenses performing at such high levels, it came down to which team could make the final run.

“There wasn’t a doubt in our minds we had enough offensively to outscore them,” Anderson said. “And thanks to our seniors who kept us even through the game and especially the fourth quarter, we were able to stay cool and see the comeback through till the end.”