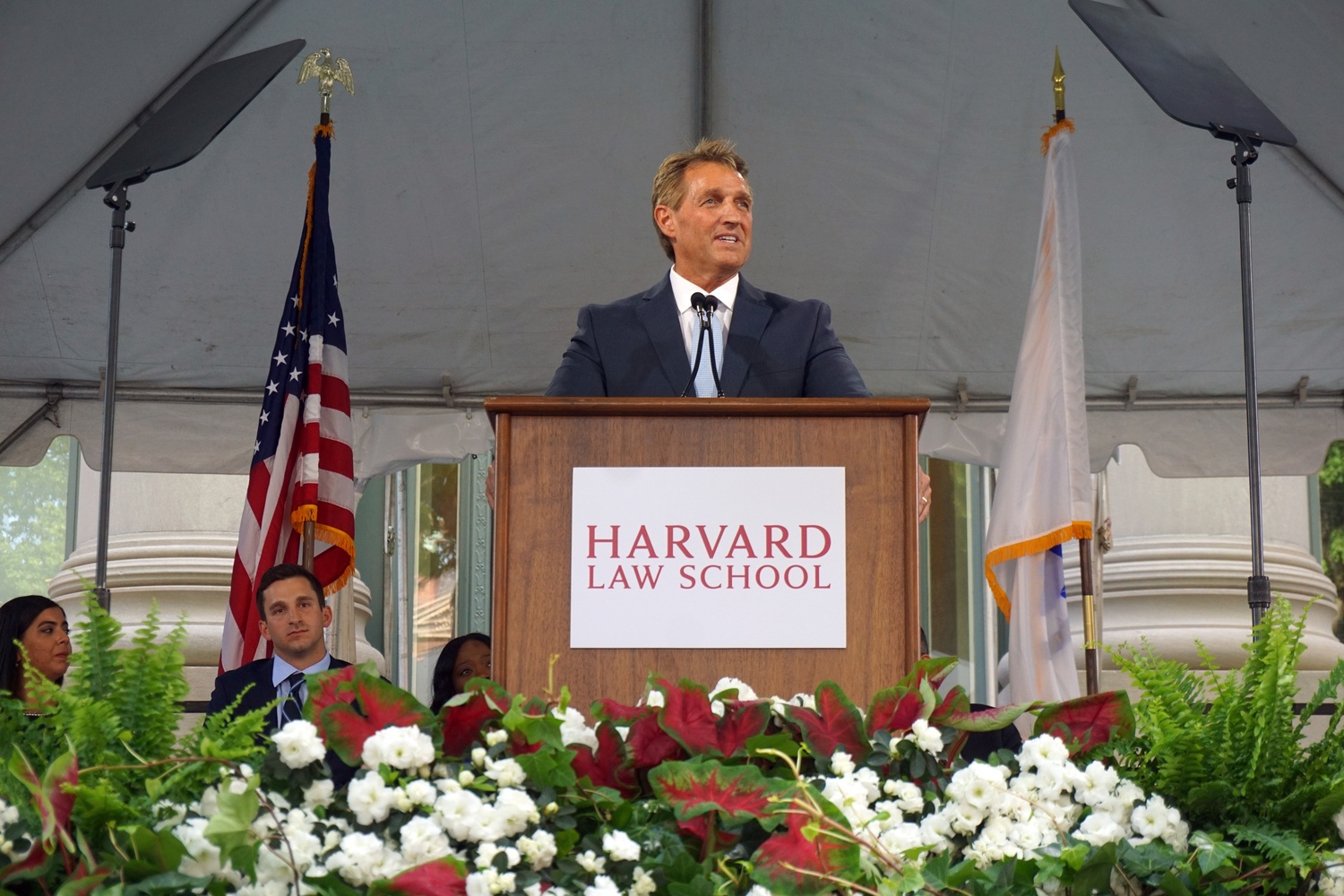 Flake took the stage at Harvard amid speculation that he is mulling a 2020 presidential run. At an event earlier this year in New Hampshire—a key early stop for presidential hopefuls—Flake did not rule out running against President Donald Trump, whom he has repeatedly and publicly challenged.

His speech Wednesday was a blistering attack on the leadership of Trump and his current colleagues in Congress, as he delivered what he called “a cautionary tale about the rule of law and its fragility.”

“Our presidency has been debased by a figure who seemingly has a bottomless appetite for destruction and division and only a passing familiarity with how the Constitution works,” Flake said.

Flake urged the Law School Class of 2018 to choose their principles over their careers, arguing that it “will be better” for themselves and those around them.

“There are times when circumstances may call on you to risk your career in favor of your principles,” Flake said. “But you and your country will be better for it.”

Some Law students have criticized the selection of Flake as the Class Day speaker. Emil N. Nachman, a third-year J.D. student, wrote an op-ed in the Harvard Law Record Monday expressing his disappointment with Flake’s selection as the guest speaker and pointing to the Arizona senator’s voting record.

“At this level—at the level of action—Senator Flake has done painfully little,” Nachman wrote. “Senator Flake’s failures go beyond complicity; he himself has played an active role in the upswell of anti-democratic politics that he criticizes so staunchly in the president.”

Flake acknowledged Wednesday that his views as a “conservative Republican” may diverge from those of many Harvard Law students, though he said solving societal problems “must involve both sides.”

Law School Dean John F. Manning ’82 also addressed graduating students and their families at the ceremony held on a sunny afternoon in front of Langdell Library.

In his first Class Day address as dean, Manning applauded members of the Class of 2018’s pro bono service and work over their three years at the school. This class graduates at the end of Law School’s year-long bicentennial celebration.

“You’re the first class of our third century,” Manning told students. “Your drive and your creativity have made this law school buzz with energy. And you have given of yourself through exceptional service to those who need your representation.”

At a time when the Law School’s commitment to public service is being questioned, Manning added that the J.D. Class of 2018 performed a record 376,532 hours of pro bono service since arriving at the school, with an average of 637 hours per student.