King of the Mound: Male Performance of the Year

No-hitters are cherished for the rare combination of skill, grit, and nerves of steel required to pull them off.

With a strikeout to end the game against Yale on April 13, Harvard senior right-handed pitcher Noah Zavolas completed a no-no in what he dubbed “one of the biggest games [he’s] ever pitched.”

In front of the 327 in attendance at Yale Field in West Haven, Conn., Zavolas tossed a masterful no-hit performance, striking out 12 and facing just two batters above the minimum in a 4-0 win against the league-leading Bulldogs.

“Really, really special night, especially being able to go out there on a Friday night against our rival,” Zavolas said. “To be able to play under the lights was beautiful in a setting like Yale. Just an incredible night all around.”

The Acton, Mass., native brought a perfect game into the eighth inning, setting down the first 23 Yale batters in a row before surrendering his first base runner on an error with two outs in the eighth.

Zavolas finished strong, however, striking out the side in the ninth to put an emphatic exclamation point on his performance. His final line: 9.0 IP, no hits, no runs, and one walk.

Zavolas was dominant from the start.

“By the fourth or fifth inning, I knew I was coming up on twice through the order with no one reaching base,” Zavolas said. “[The possibility of a no-hitter] kind of started to creep up on me. Truthfully, my two starts prior, I had had a little bit of a shaky first inning, so just to get through that first in a 1-2-3 manner was new and refreshing for me, so I knew things were looking up immediately. But I would say fifth or sixth inning, you realize something’s brewing.”

The Crimson offense staked its ace to an early 3-0 lead after posting three runs on five hits in the second. The fact that the game was neither scoreless nor a blowout did a lot for Zavolas’s rhythm—he wasn’t in the dugout for too long between innings, nor did he have the stress of a scoreless game on his shoulders.

“It’s always nice to pitch with the lead,” Zavolas said. “It allows you to pitch a little bit more relaxed, and be more aggressive, especially early in the count with batters. To some extent, it was also really nice that it was still a close game. It was almost a perfect storm, because we were winning, but it wasn’t a blowout, so every pitch still very much mattered. And the innings went by quickly, so it was a great rhythm to it as well; it wasn’t like I was sitting on the bench for 15-20 minutes.”

In the bottom of the eighth inning, Harvard’s nerves were put to the test.

A ground ball to a diving junior first baseman Pat McColl was mishandled by Zavolas, giving the Bulldogs their first baserunner. Though the perfect game was broken up, the no-hitter was still in play, albeit on a tightrope. 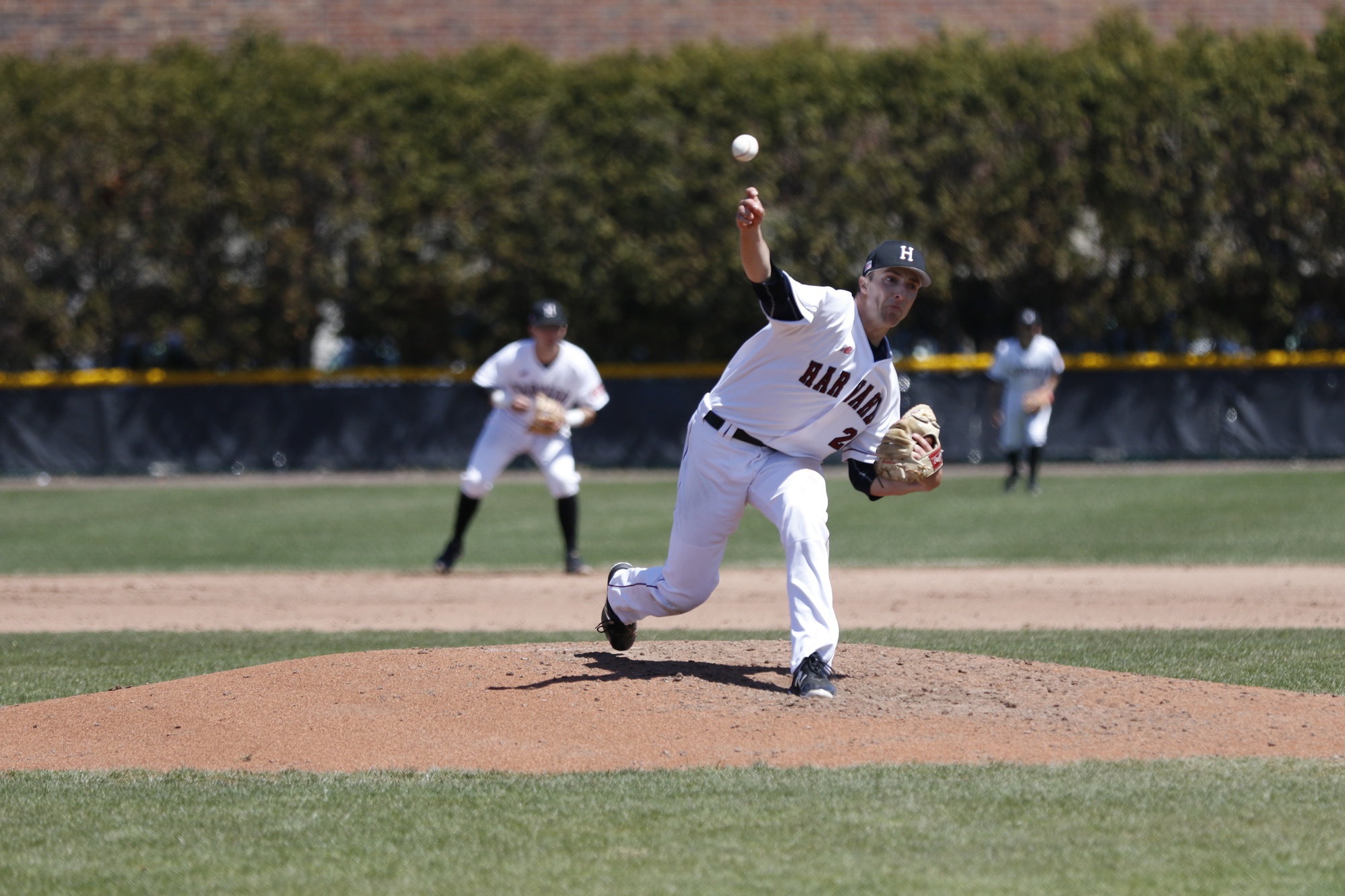 Zavolas fanned 12 batters in his no-hitter on April 13 against Yale, earning his fourth win of the season. By Timothy R. O'Meara

“It was unfortunate, and in the moment, it kind of dawned on me what was happening,” Zavolas said. “The game was still very close, with a runner on first, so it was good that there were two outs at the point, and I just had to focus in for one more hitter and get that out. In some sense, it was fortuitous that it was me who made the error—if someone had to make the error, I would much prefer that it was me.”

If it rattled Zavolas, he didn’t show it.

“I think it rattled us [behind him], more than anything,” McColl said. “It didn’t really faze him too much, he seemed not too worried about it.”

The veteran starter got a groundout to end the inning and worked around a ninth-inning walk to shut the door on Yale.

“Everyone was pretty locked in on defense,” said McColl of the last two innings. “It can be a little nerve-wracking when you’re out there in the ninth inning. Just talking to some other guys, you want the ball hit at you, but you’re also kind of freaking out a little bit because you know you’ve got to make a play if it comes to you.”

When the moment of the final out finally came, the whole team was there to celebrate.

“For me, I threw the pitch and then the ball skittered away from the catcher, so it was a little bit of a delayed reaction,” Zavolas said. “Completely surreal to have the team come storming out of the dugout.”

"Really just a perfect night, with the right people in the right place at the right time. Everything came together," senior pitcher Noah Zavolas said.

Zavolas didn’t no-hit any average opponent, either. Yale was the best team in the Ivy League all year long, finishing atop the regular-season standings with a 15-6 conference record. He also couldn’t have picked a better night to throw the gem on—his parents were in attendance.

“It was special because both my parents were there, and my host family from this past summer was there, too,” Zavolas said. “Walking over to my folks afterwards and locking eyes with my dad, having that look pass in between us…having no idea how what just happened, happened, was pretty wild. Really just a perfect night, with the right people in the right place at the right time. Everything came together.”

Junior catcher Jake Allen navigated the game behind the plate with Zavolas, framing pitches, blocking balls in the dirt, and providing the final putout at first base to close the game.

“I firmly believe that the relationship between the pitcher and catcher is incredibly important, and most of that just boils down to trust,” Zavolas said. “We had been paired up a couple weeks prior, so it was nice to have consistency behind the plate. To have him back there, he was a very calming presence. Jake did a great job all night, and it looked like we were in sync from the first pitch.”

The no-hitter solidified Zavolas as the ace of a burgeoning Crimson squad that sorely needed front-end pitching stability. The game lowered his ERA at the time to 3.38, though his season-ending ERA dipped even lower, ultimately settling in at 2.96.

The no-no was Harvard’s first in 17 years, when former Crimson standout Ben Crockett—now in the Red Sox front office—did it against Dartmouth in the 2001 season finale.

As of April 30, 2018, college pitchers this season had thrown 22 no-hitters, less than 0.4% of games of around 7000 Div I NCAA regular-season games—a tiny proportion. Even so, this year was college baseball’s “Year of the Pitcher”—2018 is set to shatter the previous single-season record of 19 no-nos, set back in 1973.