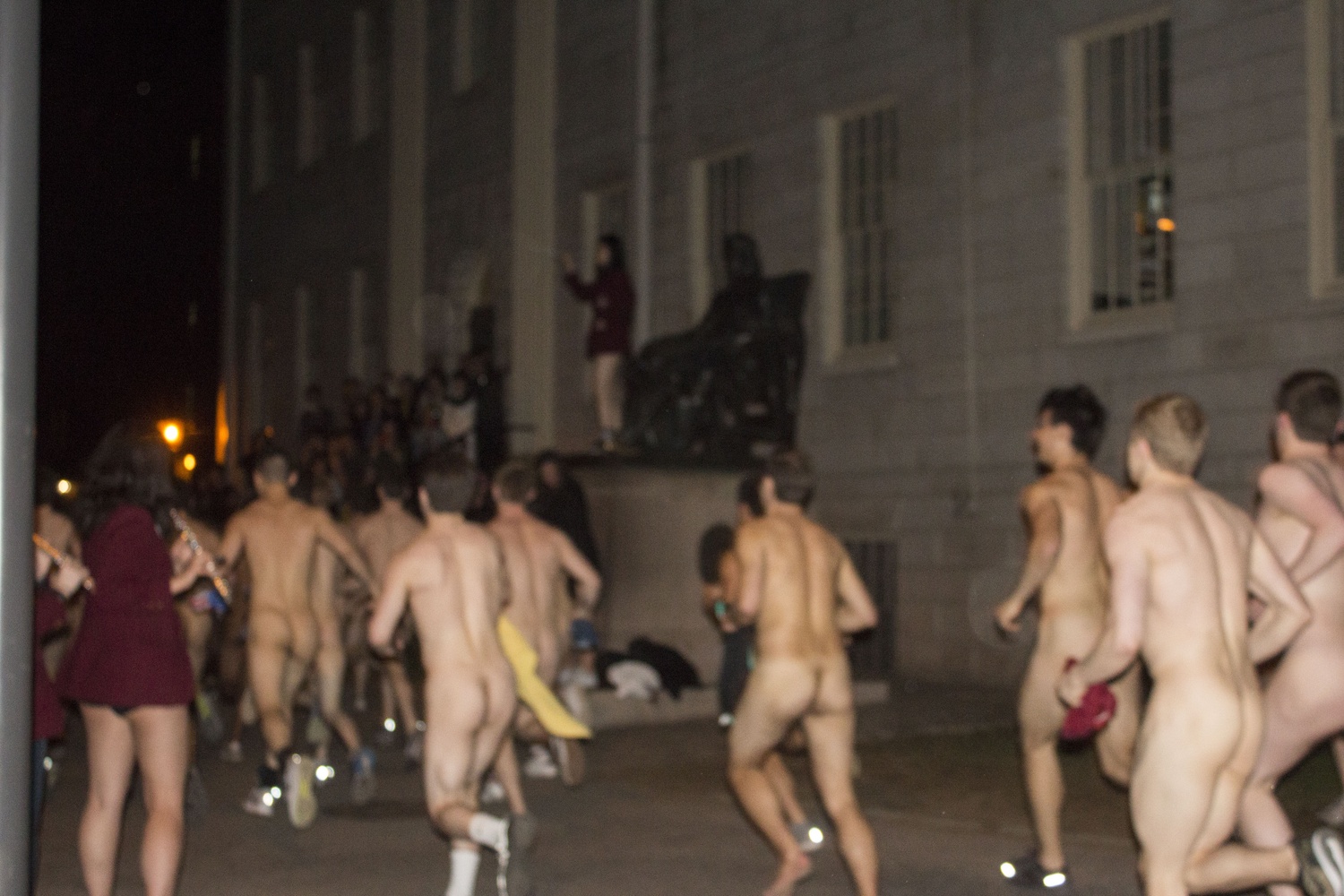 Greeted by fanfare and unseasonably warm temperatures, more than a hundred naked undergraduates celebrated their last night of freedom before final exams by running a lap or two around the Yard at midnight Thursday as part of a semesterly tradition known as Primal Scream.

Crowds of students walking from both freshmen dorms and upperclassmen houses gathered at an unofficial starting line in front of Hollis Hall shortly before midnight. Dancing, shouting, and cheering on friends, students stripped off their robes and undergarments before sprinting the lap around Harvard Yard.

The Harvard University Band—many of whom were also scantily clothed—began performing in front of the John Harvard statue just before midnight. Tourists and other students also gathered near the edge of the Yard to take pictures of the band and of the growing crowd of nude students.

Maya H. Levine ’21 said in an interview before the scream that she believes the tradition is “hilarious,” but she did not want to participate if only a few people ran.

“I’m definitely not going to run alone,” Levine said. “So I’m planning on running if I’m not the only one.”

After the run, students said they enjoyed the chance to have fun before finals began.

Nikole L. Naloy ’21 said the run was “the most liberating experience.” She said she participated because she wanted to “build community” with her fellow classmates.

Andrew D. Zuckerman ’21, said he had no qualms about streaking through the Yard.

“I was taking a shower last night and I was naked there and I was like, ‘If I’m naked in the shower I can be naked in the Yard,’” Zuckerman said. “It’s the same thing.”

Other students who had partaken in Primal Scream before said they were thrilled by the chance to relive their exciting experiences.

Isabel A. Wagner ’18, a former Crimson blog chair, said she ran with the same friend she ran with in her freshman fall for its “sentimental value.”

“We both ran it freshman fall, and we wanted to do it senior spring to kind of do full circle,” Wagner said.

Harry T. Newman-Plotnik ’18, who ran last year, said the experience was worth repeating.

“Why not? I suppose,” Newman-Plotnik said. “There’s not a lot of institutionally sanctioned time to just run naked.”

“It’s weird and it’s oddly exhilarating and longer than you think it is,” Newman-Plotnik added.

In the days leading up the event and in the hours following, several College students and alumni questioned the practice. Though Primal Scream is a long-running tradition which University administrators and police do not prohibit, some students said they are concerned the event is occurring so soon after the arrest of a naked, black College student last month.

Reina A. E. Gattuso ’15, a former Crimson editorial editor, wrote an article for Feministing.com last week arguing that the difference in perception between Primal Scream and last month’s incident is reflective of a racial “hierarchy of bodies," in which she says drug and nudity offenses receive starkly different responses on the part of the police depending on the race of the perpetrator.

She referenced her own undergraduate experience, writing, “When I stood in Harvard Square naked and intoxicated, a white woman participating in the esteemed College’s Primal Scream ritual, I was not beaten when down.”

She further contrasted this week’s relatively tame Primal Scream with the one that took place in Dec. 2014, when students attempted to hold a silent demonstration over the killings of two unarmed black men, Michael Brown of Ferguson, Mo. and Eric Garner of New York, killed in the summer of 2014.

Though similar protests did not occur at this year’s Primal Scream, a couple dozen people shared Gattuso’s article on Twitter.