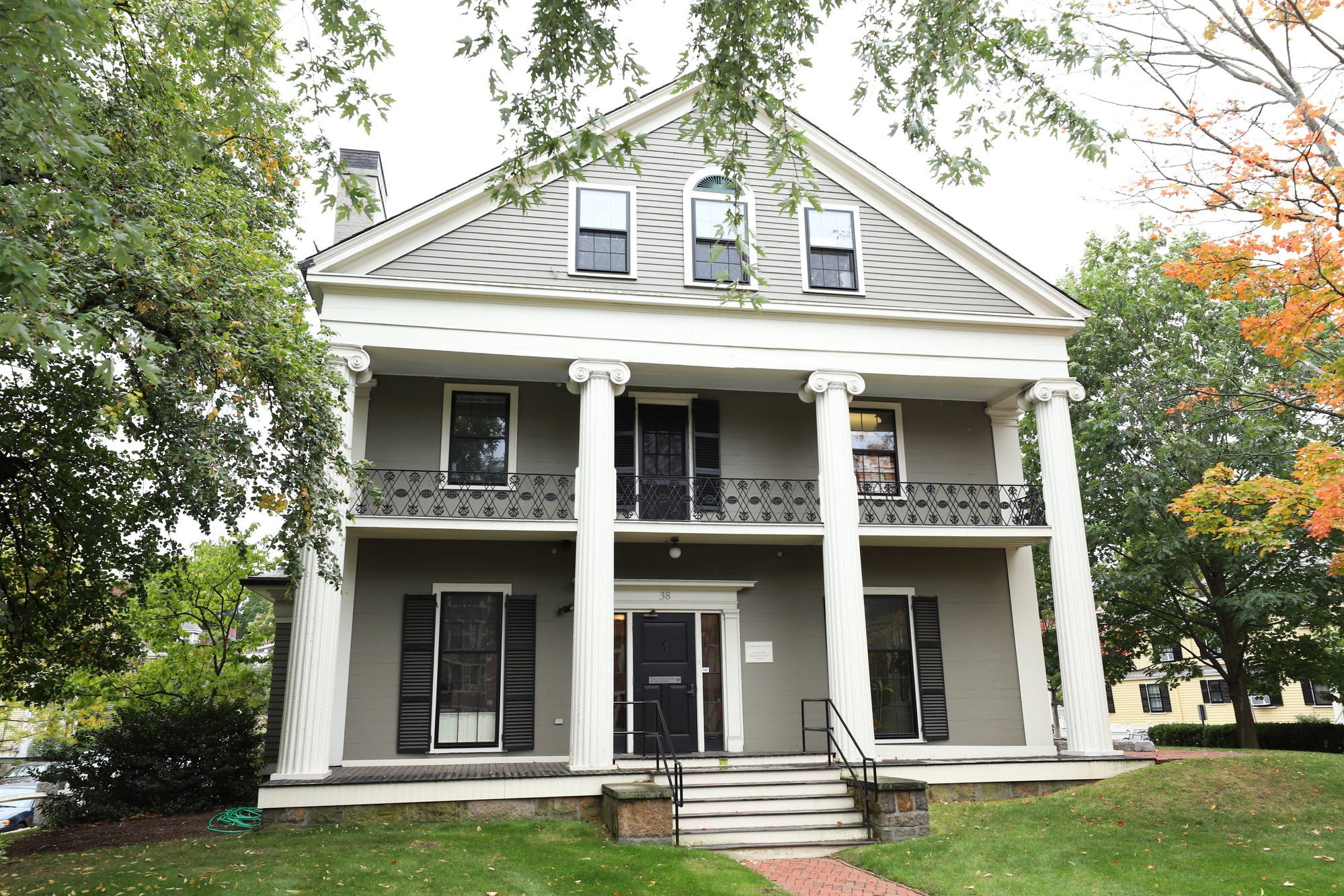 Federal Funding and the Question of Academic Freedom

After many organizations decried the First Amendment violations in the letter, last month, the Department of Education voted to renew funding for the Duke-UNC Consortium for Middle East Studies for the 2019-2020 academic year. Still, members of Harvard’s CMES are worried the letter will affect its own Middle East Studies programming under the Trump administration.
By Paul G. Sullivan

The Center for Middle Eastern Studies at Harvard was founded because of the Cold War.

In 1953, the Committee on International and Regional Studies sent a proposal to Harvard President Nathan M. Pusey ’28 calling for the establishment of the Center on the basis of Harvard’s “international commitment to counter the Soviet threat in the Middle East, the fundamental importance of Middle Eastern oil to our economy, and the continuing crisis in the region.”

The Cold War was, overall, a boon to American higher education. Universities across the country were expanding — not in the name of scholarly research, but in the name of national security. And they did so on the government’s dime: In 1958, Eisenhower signed the National Defense Education Act, which provided federal funding to educational programs that sought to benefit national security and U.S. economic interests. Harvard’s CMES was one of the first centers to receive funding under Title VI of this act.

In March of this year, Palestinian rapper Tamer Nafar performed “Mama, I Fell in Love with a Jew” at the University of North Carolina at Chapel Hill, a song about a Palestinian man falling in love with an Israeli woman. Nafar — whose music focuses on human rights in the Middle East — had been invited by the Duke-UNC Consortium for Middle East Studies to participate in a conference about the conflict over Gaza. An edited clip showing about thirty seconds of Nafar’s evening-long performance began circulating on the Internet.

The clip is incriminating. “I need your help. I can’t be anti-Semitic alone, try it with me together,” Nafar says to the audience before singing “Mama, I Fell in Love with a Jew,” which he describes as his “anti-Semitic song.” The clip, shot and edited by conservative filmmaker and Fox News correspondent Ami Horowitz, then shows the audience standing and cheering. The Duke-UNC Consortium later clarified that the standing and cheering shown in the clip was from a different part of the concert.

Nevertheless, the clip found itself in the hands of North Carolina State Representative George E.B. Holding, who brought it to Betsy DeVos’s attention in an April letter. Holding urged the Department of Education to investigate the Duke-UNC Consortium for Middle East Studies. Specifically, Holding wanted to know if the conference had received funds from Title VI of the National Defense Education Act.

Harvard’s Center for Middle Eastern Studies stopped receiving funding from Title VI several years ago, according to Lauren Montague, executive director of Harvard’s CMES. The Center receives enough money from its endowment and private sources, so Title VI funds had been merely supplementary, anyway. The Duke-UNC Consortium, however, does receive Title VI funding from the Department of Education. The Duke-UNC Consortium declined to comment on this story.

In August, following its investigation, the United States Department of Education sent a letter to Duke and UNC ordering them to restructure their Middle East Studies program if they wanted their Title VI funding to be renewed. The letter was sent about a month before the Department of Education was set to vote on which universities would receive Title VI funds for the 2019-2020 academic year.

In the letter, the Department of Education wrote that too few courses offered by Duke-UNC focused on “the historic discrimination faced by, and current circumstances of, religious minorities in the Middle East, including Christians, Jews, Baha’is, Yazidis, Kurds, Druze and others.” The letter also stated that not enough classes offered by the consortium “support[ed] the development of foreign language and international expertise for the benefit of U.S. national security and economic stability.” This is, according to the letter, “unlawful.” The Duke-UNC consortium failed to distinguish activities “lawfully funded under Title VI” — that is, the programming that would fall under the national security and economic interest criteria outlined in 1958 — from those which don’t qualify.

According to the Department of Education’sletter to Duke and UNC, the consortium’s former projects such as a conference on “Love and Desire in Modern Iran” or a book entitled "Mihri Hatun: Performance, Gender-Bending and Subversion in the Early Modern Ottoman Intellectual History," written by a member of Duke’s faculty, are among the programming that “have little or no relevance to Title VI.”

“Although Iranian art and film may be subjects of deep intellectual interest and may provide insight regarding aspects of the people and culture of the Middle East, the sheer volume of such offerings highlights a fundamental misalignment between your choices and Title VI's mandates,” Assistant Secretary for Post-Secondary Education Robert L. King wrote in the letter.

Jesse C. Howell, academic programs manager for the CMES at Harvard, says he doesn’t see why “a more nuanced understanding of a place like Iran, including its queer cinematic tradition, is somehow inherently separated from this core mission of supporting U.S. security interests in the Middle East.”

Understanding more than a region’s economic and military resources is important for making effective U.S. foreign policy, according to Howell. “You can’t separate the political from the cultural, if you want to have a lasting impact,” he says.

Since Title VI was created, “the model has been interpreted in a pretty flexible and loose way,” says Harvard Law School professor Noah R. Feldman ’92. It has been up to individual universities to determine what programming does or does not promote national security and economic interests under Title VI. “The norm has not been for that to be questioned by the federal government,” says Feldman.

Feldman describes this abrupt move away from the traditionally loose interpretation of Title VI as “striking.”

It’s striking, but not surprising. The letter reflects the current leadership of the U.S. Department of Education. Kenneth L. Marcus, the Assistant Secretary for Civil Rights at the DoED, has been accused by critics of using his position, which is designed to enforce the civil rights protections of marginalized groups, to advocate a pro-Israel standpoint.

Before working in the DoED, Marcus founded the Louis D. Brandeis Center for Human Rights Under Law, which lobbied the Education Department and Congress to reform Middle East studies programs that, according to the center, possessed anti-Israel bias. Last September, in his position as head of civil rights at the DoED, Marcus reopened a seven-year-old case brought by a Zionist group, the Zionist Organization of America, against Rutgers University. Marcus argued that this case was within the purview of his position because, according to him, Rutgers had discriminated against and provided a hostile environment for Jewish students. As President Trump has tightened his alliance with Israel, Marcus’ actions parallel the administration's political leanings.

The letter sent to Duke and UNC is in line with these efforts, and others, that Marcus has made in the past year to delegitimize and defund Middle East studies programs that he argues are biased against Israel.

After many organizations decried the First Amendment violations in the letter, last month, the Department of Education voted to renew funding for the Duke-UNC Consortium for Middle East Studies for the 2019-2020 academic year. Still, members of Harvard’s CMES are worried the letter will affect its own Middle East Studies programming under the Trump administration.

“My fear is self-censorship. Not overt censorship, but the fact that people may not feel comfortable bringing forward ideas, because they're afraid of hypermedia attention that can be misconstrued if you're not an expert in these programs,” says Lauren Montague, executive director of Harvard’s CMES. “Middle Eastern Studies is such a keen area of expertise that is needed, that this kind of a volley attacking the very limited funding for these kinds of programs that the government supports,” says Montague.

“It's chilling. The thought that someone would come in and hyper-analyze all of your choices, I think could potentially incapacitate you from your programming,” Montague says. She adds that she feels lucky that Harvard’s CMES is not reliant on Title VI funding and does not have to fear this level of scrutiny.

Still, Feldman says that the letter could nevertheless have consequences for the work of Harvard’s CMES, Title VI funding or no Title VI funding. The research and writing done in universities doesn’t happen in isolation. Instead, it’s “part of a broader ecosystem,” he says.