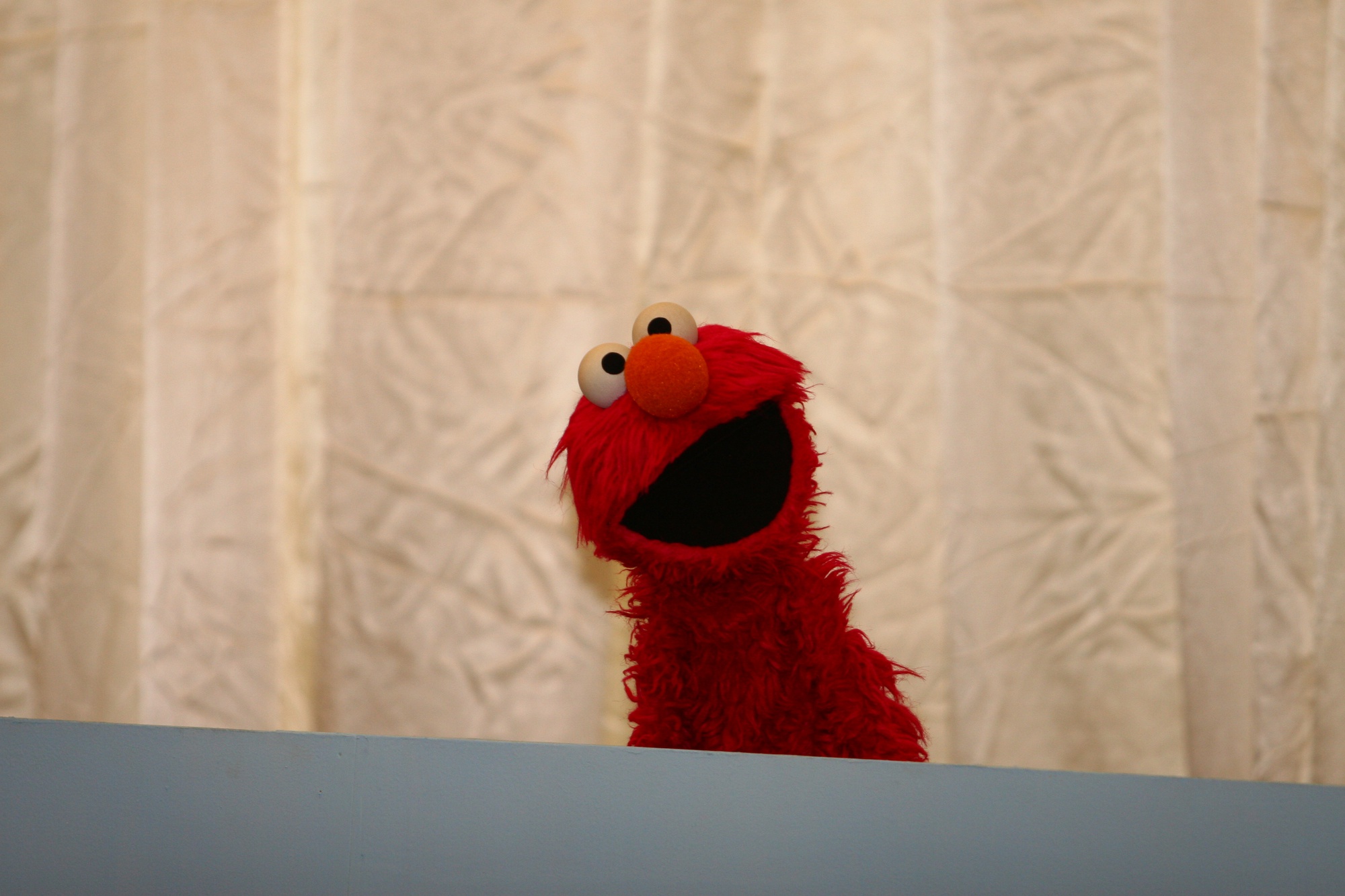 At the Intersection of Sesame St. and Mass. Ave.

This year marks the 50th anniversary of Sesame Street. In between performances from the show’s beloved cast, Harvard affiliates recount what are, to many, little-known stories about the longstanding ties between Harvard and Sesame Street.
By Saima S. Iqbal and Aiyana G. White

Big Bird bounds across the stage in Sanders Theatre.

“I’m here to meet my new friend, Larry Ba-ca-caw!” he wheezes. At 8 foot 2 inches and 300 pounds of yellow fluff, Big Bird towers over University President Lawrence S. Bacow, who stands at the podium in a pinstriped suit. The two go back-and-forth on whether Bacow is, in fact, a bird. Later in the show, Elmo bemoans how difficult it was to apply to Harvard, and Grover describes a day in his life as a tenured physics professor.

The audience, ranging from local Cambridge residents to Harvard professors, laughs, albeit tepidly. It is not often, after all, that the Muppets perform for a room full of adults.

This year marks the 50th anniversary of Sesame Street. In between performances from the show’s beloved cast, Harvard affiliates recount what are, to many, little-known stories about the longstanding ties between Harvard and Sesame Street.

Sesame Street emerged in the 1960s as a response to the nationwide discussion about educational disparities. The Coleman Report, published in 1966, determined that the most important factors in a child’s academic success was their family background and diversity in the classroom, rather than the quality of their school. Around the same time, pediatrician Julius B. Richmond proved that poverty hinders the cognitive development of young children; lower-income students learned fewer words than their counterparts and struggled to understand abstract concepts later on.

Sesame Street sought to level the playing field by repeatedly exposing children to new words and concepts through catchy songs. For creators Joan G. Cooney and Lloyd N. Morrisett, television was the ideal medium to do this. If done well, the show could reach millions of families.

The two turned to Harvard to pursue their goal.

Then-Dean of the Faculty of Arts and Sciences McGeorge Bundy, and Graduate School of Education lecturer Harold Howe, provided the initial funding for the show. Sesame Street’s founders also sought out human capital at the University, tapping researchers to develop the show’s curriculum and alumni to compose the accompanying songs.

Chief amongst Harvard’s contributors was professor Gerald S. Lesser, who served as chair of the show’s advisory board, Sesame Workshop, for 30 years. He shaped the pedagogy of the show, translating insights from academic research to Sesame Street’s programming.

During the celebration in Sanders, HGSE Dean Bridget Terry Long spoke about how “innovative and radically transformative” Sesame Street was.

HGSE professor emerita Courtney B. Cazden, who served as a consultant on children’s language development, remembers being thrilled to be included in the conversation about creating a T.V. show, a rarity for academics. “I as a researcher got the chance to talk to television producers who otherwise, I dare say, would never speak with me,” she says.

Lesser’s model worked. Within ten years, the show had become a household staple: nine million American kids were watching it every day.

Cooney and Morrisett realized that the show could teach kids much more than just their ABCs and 123s; it could teach them to be kind and accepting of others. Harvard Medical School psychiatry professor Chester M. Pierce ’48 had long advocated for the representation of people of color and other minorities within the media, which Sesame Street quickly adopted as a core element of the show.

According to Judith S. Palfrey, a professor of pediatrics at Harvard Medical School who served as a medical consultant for the show, this push for inclusion was tied to the show’s emphasis on the social and emotional skills kids needed to succeed.

Jeffery D. Dunn ’77, president of Sesame Workshop, says that at its core, Sesame Street hopes to address the “dearth of content on important but difficult subjects for kids and families of this age group,” to “become the Google for these matters,” covering topics like pregnancy, disability, and death.

As the show at Sanders ends, Dunn is joined by his fellow speakers and the Muppets on stage, who urge the audience to sing along to Sesame Street classic, “Sing a Song.” Elmo coaxes the audience: “Don’t worry if you sound bad!”