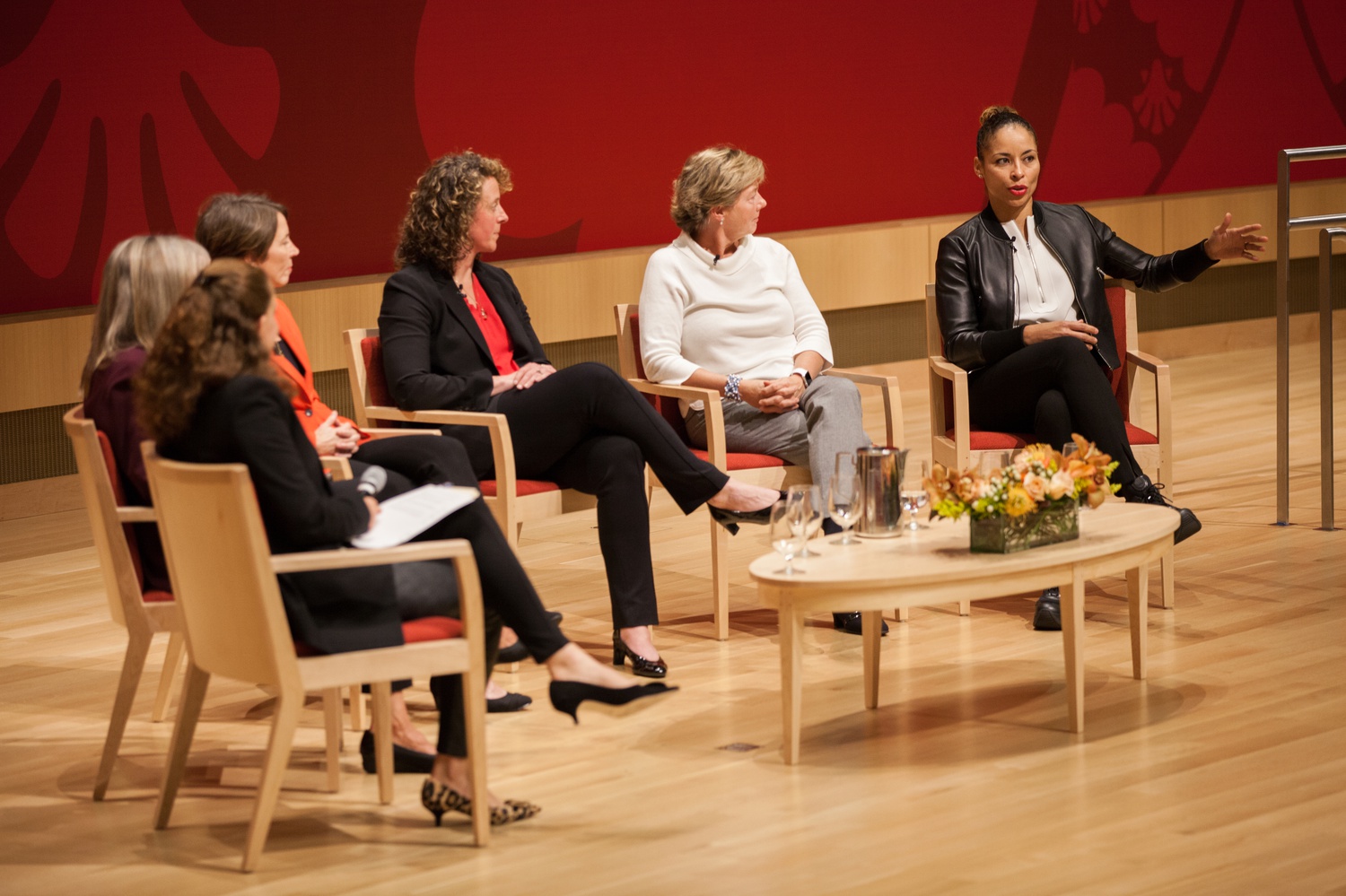 Five decorated female veterans of athletics spoke about “sports as a classroom” that teaches women life-long, professional skills at an event at Harvard Business School on Tuesday evening, drawing a crowd of around 500 people.

The panel, which brought together three players — two of whom were teammates — with their former coach, resembled a family reunion; in such a way, Delaney-Smith reigned as matriarch. Delaney-Smith, who is the winningest coach in Ivy League history, said her players were a testament to the power of sports in teaching resilience and leadership.

By playing sports, Delaney-Smith said, “you practice leadership every single day. You succeed and fail every single day...I believe failure is heels for success. When you fail today, you get up tomorrow and you try again...I think that’s the most incredible environment to learn about life.”

“These women are proof positive that sports is an incredible classroom,” she added.

The three former players on the panel reflected on how lessons they learned on the court applied to their careers after playing competitive basketball.

Healey, who captained the varsity team at Harvard and played professional basketball overseas, said that the far-sighted mentality of playing a basketball season came in handy when she was running for Attorney General of Massachusetts in 2014. In that campaign, Healey said, she was able to surmount her establishment-favored opponent by treating the race as a basketball season.

“What they [her opponents] didn’t know is I treated it like a season,” she said. “And so everyday I just got out there and got after it...Just like in practice, you’re going to have good days, bad days, ups and downs. But if you treat it as a season, which is what I did, you’re looking at where you get to at the very end. That was helpful.”

Failures, Gelman agreed, are part and parcel of not just basketball careers but professional careers too. Thus, competitive sports taught Gelman, who was honored as an Ivy League Legend of Basketball, how to have a work-ethic that would set her — and those around her — up for success.

In order to win on the court, Gelman became a student of the game.

“I definitely wasn’t the most athletic,” Gelman said. (In sprints during practice, she acknowledged that she was more often finishing with the posts than with the guards). “But I loved the game and I did everything that I possibly could...I used to eat with my left hand so I would be a better ball handler and shooter. I studied sports psychology at Harvard so I could be better in games.”

Players added that in addition to working hard to better themselves, competitive sports taught them how to work as a team to achieve a common goal — a trait that they continue to use in their careers.

Gelman tried not only to hone her individual skills but to put her teammates in positions where they would succeed. As a point guard, her role was to understand her teammates’ strengths and weaknesses.

Feaster, Harvard women’s basketball’s all-time leading scorer and a WNBA veteran, also stressed the importance of understanding others when working as a part of a team. As a teammate, Feaster said that she developed a leadership philosophy that was based in empathy and lifting up others for the greater good.

“It’s always been about being authentic and really putting myself in the shoes of each and every person who’s on the team,” she said.

The event was very much a celebration of women in sports; at the same time, panelists acknowledged the gender and racial inequities that persist in the arena, such as unequal pay in professional sports.

Despite these inequities, members of the Harvard Women’s Varsity Basketball team came away from the event with feelings of gratitude.

Sophomore guard Maggie McCarthy said that the panel helped her realize that female role models in sports have not always been as ubiquitous as they are today.

“Not all of [the panelists] grew up in a world where pushing for women in sports [was] the norm. They’ve done [such] hard work to get us where we are now,” she said.

Senior forward Jeannie Boehm added that the discussion reaffirmed to her all that her coach, Delaney-Smith, has done to elevate women’s sports.

“You don’t realize it all of the time day in and day out being coached by Kathy the impact she has on other women and that she’s had in women’s sports,” she said. “It was so cool to see her and the players she’s coached in this sphere. I feel fortunate that we all get to witness that power and that inspiration from Kathy on a daily basis.”